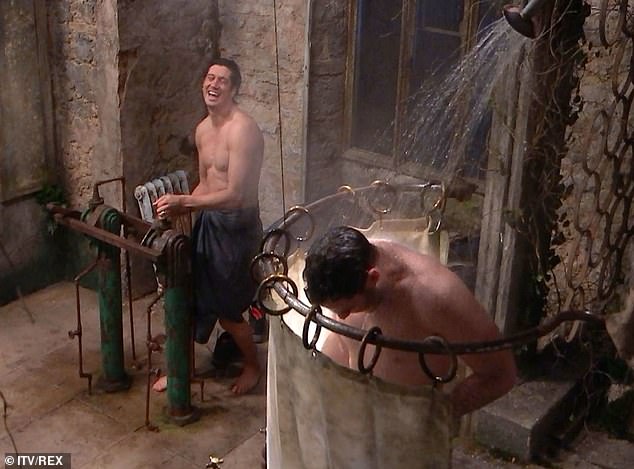 They’re settling into camp life at Gwrych Castle in Wales.

And Jordan North, 30, and Vernon Kay, 46, proved they’re already working as a team as they helped each other shower on Monday’s episode.

During their attempt at washing in the chilly climes, the funny duo joked and laughed as they took turns pumping water for each other to freshen up.

Jokers: Jordan North, 30, and Vernon Kay, 46, embraced the campmate spirit as they helped each other shower on Monday’s episode of I’m A Celebrity…Get Me Out Of Here!

It didn’t take long for the pair to realise showering was now a two-person job as the water pump was on the other side of the bathroom.

Determined to help each other, Jordan took control of the pump first and was seen shouting over to Vernon as he stood in a metal tub with a grubby white curtain.

After he was all freshened up, Vernon swapped places with Jordan and pumped the water while wrapped in a grey towel.

During the bathroom trip both of the radio hosts appeared to be in great spirits as they laughed with each other. 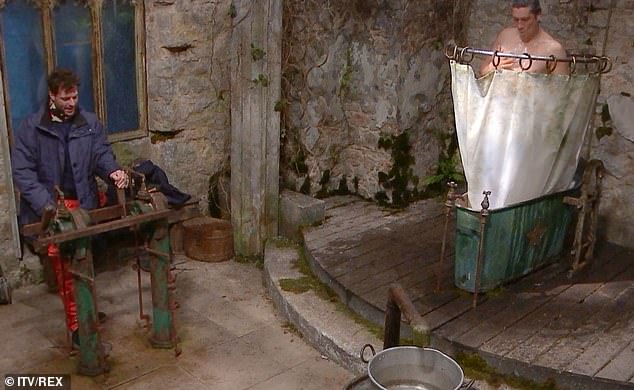 Little help from a friend: The DJ pumped some water so that Vernon could freshen up in the tiny bath tub with a grubby curtain around it

Talking in the Telegraph about the experience, Jordan joked: ‘I think I’ve peaked already a couple of days in, I’ve showered Vernon Kay.’

He added: ‘That bathroom is awful, you have to get someone to pump water from the other side of the bathroom.

‘It looks like the start of when they buy a house in Homes Under the Hammer but worse than that.’

I’m A Celeb viewers were also impressed with the entertaining shower scene, with many sharing their thoughts about the moment on Twitter. 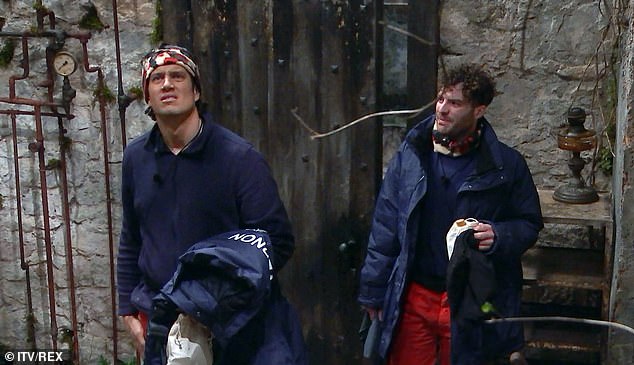 Bit of a shock: Vernon, 42, didn’t look too impressed as he laid eyes on the bathroom 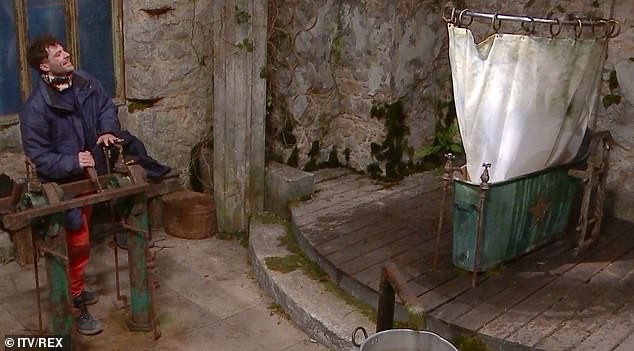 How’s it going? Jordan smiled and laughed as he looked over at Vernon in the shower 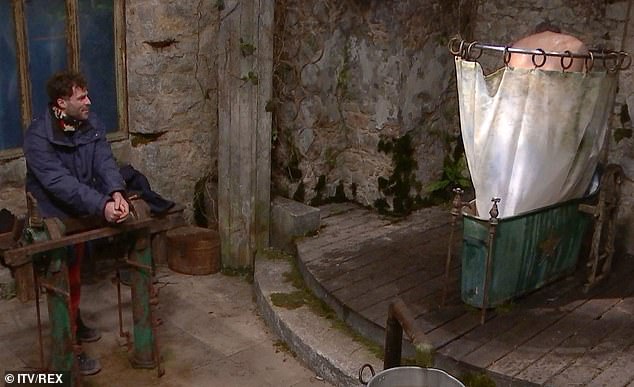 Getting into the swing of it: The entertaining duo appeared to work out a good system 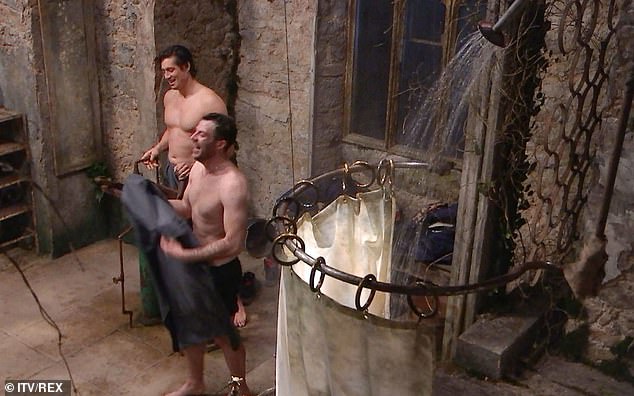 Your turn: Jordan also jumped into the tub for a quick shower as Vernon took over pump duties while wrapped in a grey towel

Some people even joked that Vernon reminded them of Buddy the Elf as he stood in the tiny tub.

And another agreed that the bath was too small, saying: ‘Hahaha Vernon Kay is way too tall for that shower!! #ImACeleb’

While others shared their pleasant surprise at the unexpected shower scene.

‘Didn’t think I’d be getting a shower scene with Vernon Kay and Jordan North on a Monday night but here we are,’ tweeted another fan. 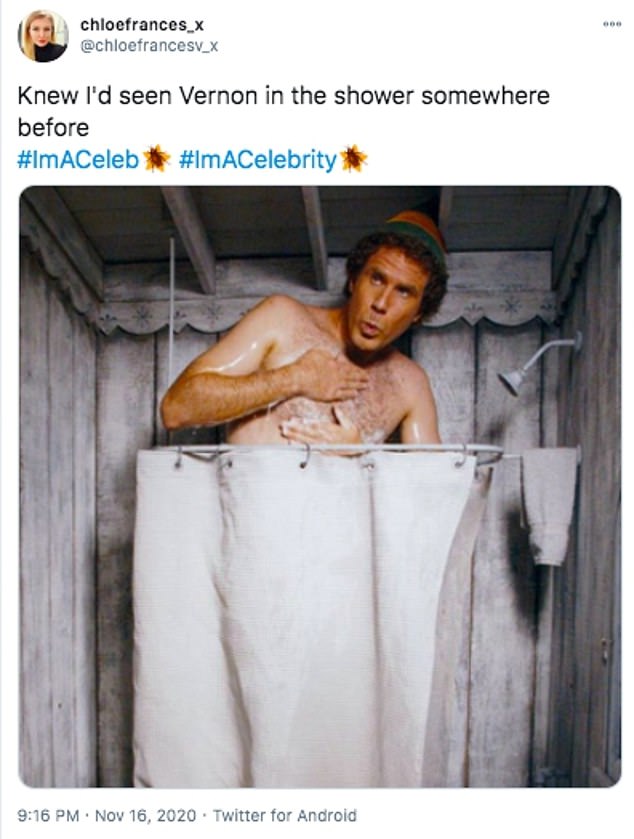 Pleasant surprise: Dozens of viewers took to Twitter to discuss the entertaining moment and also joke that Vernon reminded them of Buddy the Elf when stood in the tiny shower tub

Elsewhere in the episode Jordan proved his determination to bring back food for the camp as he took on the first Bushtucker trial alongside Shane Ritchie.

Host Declan Donnelly explained the Viper Vault Trial to them, saying that they’d both be locked inside one of two vaults that were built into the castle floor.

The challenge saw the unfortunate celebrities sealed into a vault where they were joined by hoards of slithering snakes.

Jordan and Shane then had to open a number of locked safes to win stars for the rest of the camp, while attempting to ignore the scary reptiles. 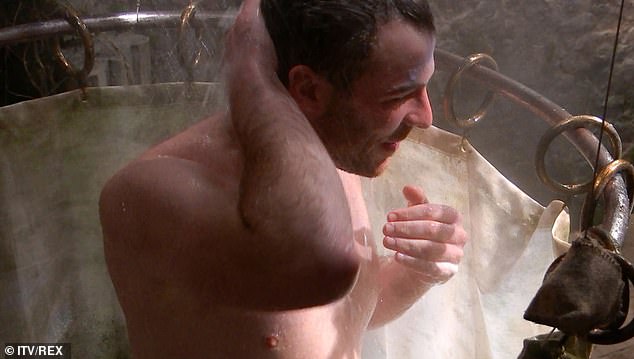 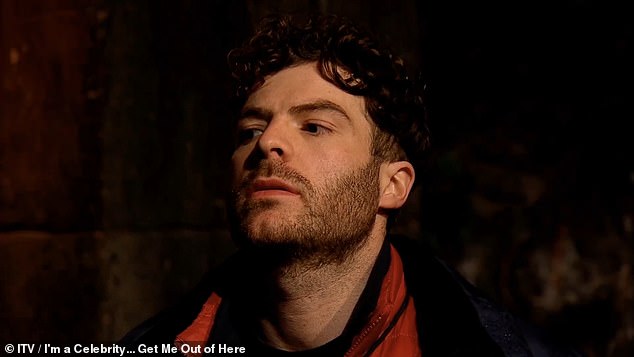 Emotional: Jordan later had to hold back tears ahead of his first Bushtucker trial

They had just 10 minutes to find 10 stars, with each star being worth a meal for camp and only the stars in their bag at the end of the Trial would count.

Ahead of getting in the vault, Jordan held back tears and even hinted at forfeiting as he said: ‘I genuinely don’t think I’ve ever been this scared in my entire life.’

However despite his worries, Jordan did very well at the challenge and managed to tell Shane codes to open his first safe while screaming about the snakes. 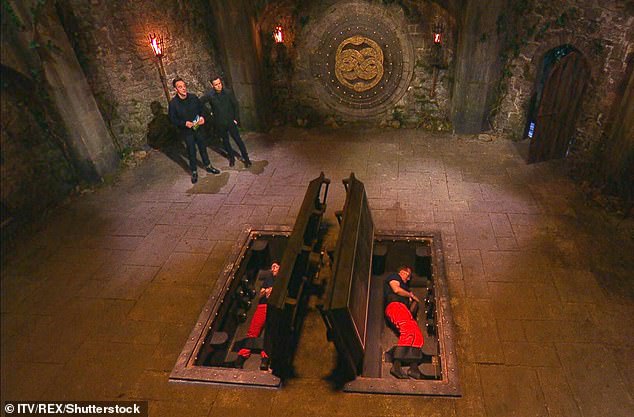 The Viper Vault: Alongside Shane Ritchie, Jordan was locked into a small space with snakes Getting through it: The star had to shout out codes to his campmate in order to complete the tricky challenge

Working together to share the magic numbers, Jordan and Shane managed to nab nine stars – meaning nine dinners – for their campmates.

Jordan quickly got out the vault and couldn’t have been happier as he he started to say: ‘My brother said to me….’

However joker Shane, quickly had everyone laughing when he said: ‘Why didn’t you do Strictly Come Dancing?’

Jordan laughed and continued: ‘My brother, who is a paratrooper said to me no matter how scared or cold you get to think of your happy place.’

I’m A Celebrity…Get Me Out Of Here on ITV 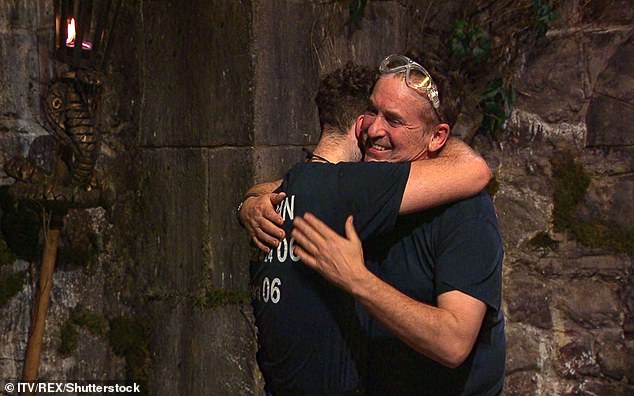 Success! The pair managed to win nine stars- meaning nine dinners- for the other celebs