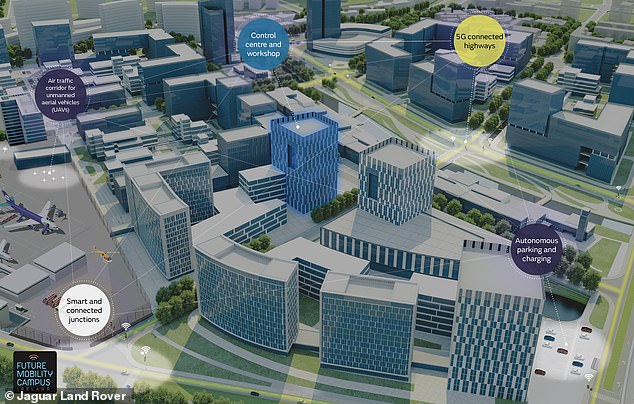 British car maker Jaguar Land Rover is accelerating its development of self-driving technology by building a ‘smart city hub’ in Ireland where it can test its cars of the future.

The specially-created city environment will be established at the Future Mobility Campus Ireland in Shannon Free Zone business park, near Limerick, and be completed next year.

It will use the location to better understand how its autonomous vehicle technology responds in busy urban environments with pedestrians, cyclists and other road users.

Smart hub for self-driving cars: Jaguar Land Rover is to created 7.5-miles of private roads simulating urban environments at a new facility near Limerick where it can test autonomous vehicle technology

The hub will consist of 7.5 miles of roads and be developed in partnership with technology companies including Cisco, Seagate, Renovo, and Red Hat.

JLR will use the facility to test its sensor data, simulate a variety of road environments and traffic scenarios and trial new technologies.

The nation’s biggest car producer will use its all-electric Jaguar I-Pace at the site.

‘The testbed will advance Jaguar Land Rover’s research into autonomous, connected, electrified and shared vehicles – a key part of the company’s commitment to making societies safer and healthier with pioneering technology,’ the brand said in a statement confirming the hub.

Autonomous vehicle systems are expected to go through a period of rapid development in the next decade, with ministers already considering permitting cars equipped with Automated Lane Keeping Systems (ALKS) – which allow for hands-free driving – to be used on Britain’s roads from next year.

ALKS is designated a ‘Level 3’ of the 5-tier automation scale by the UN’s Economic Commission for Europe.

This signifies that the person at the wheel is not driving when the automated systems are engaged, but can step in at any time and must take over at the system’s request.

With a Level 3 system activated, the user is allowed to do other things, such as watch a movie or even send a text message, but must retain some level of alertness to what is happening around them. 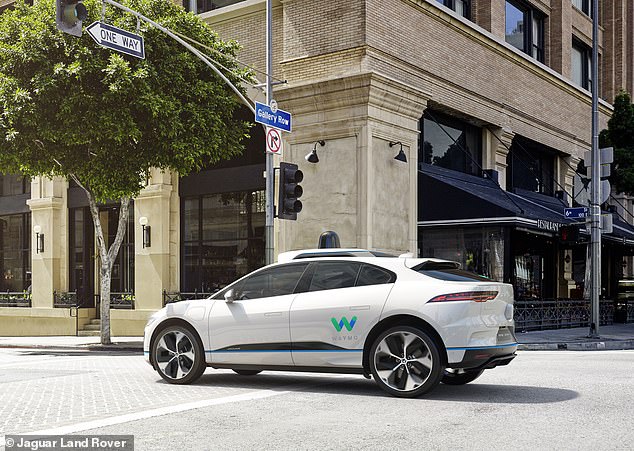 JLR has been at the forefront of self-driving tech development. In 2018, it announced a long-term partnership with Waymo to use all-electric Jaguar I-Paces to test its autonomous systems

JLR’s smart city hub will be  equipped with sensors throughout the site, along with high-accuracy location systems, a data management and control centre and self-driving prototype vehicles.

The layout will include smart junctions, connected roads, autonomous parking and electric vehicle charging as well as links to a 280-mile stretch of connected highway and a managed air traffic corridor for unmanned aerial vehicles from Shannon airport along the Shannon Estuary in Ireland.

‘The testbed provides an opportunity to test in the real world and help answer some of the questions posed by the future of mobility in a collaborative and efficient way.’ 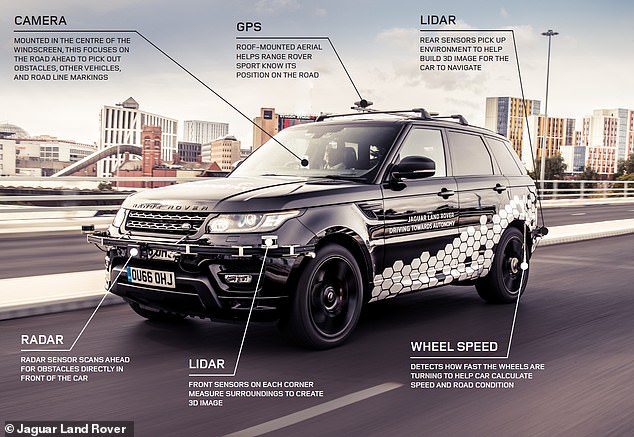 Jaguar Land Rover has been testing driverless car technology on UK roads since 2018. This Range Rover Sport completed a lap of Coventry’s ring road in 2018 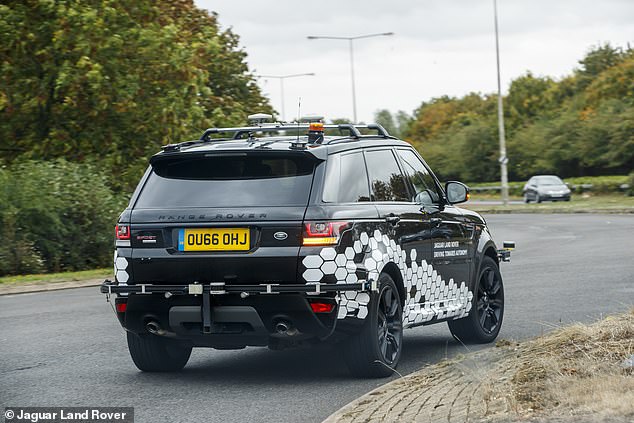 The hub is the latest in a raft of self-driving projects JLR has spearheaded in recent years.

In 2018, it announced a long-term partnership with Waymo – the autonomous-vehicle department of Google – and also completed i the first self-driving lap of the Coventry Ring Road using a Range Rover Sport, which successfully changed lanes, merged with traffic and exited junctions at the speed limit of 40mph.

In February, it revealed details of Project Vector, an electric driverless pod that will be at the heart of autonomous vehicle trials on public roads in Coventry from next year.

The car manufacturers has also claimed to have developed new software to train autonomous cars to drive better to prevent passengers from suffering from motion sickness during journeys.

In August, it announced it had created a rating system for driverless technology – called a ‘wellness score’ – that designers claim can reduce the impact of travel sickness by up to 60 per cent.

If successful, it means the brand’s autonomous technology won’t steer, accelerate or brake erratically – resulting in the inside of vehicles remaining vomit-free. 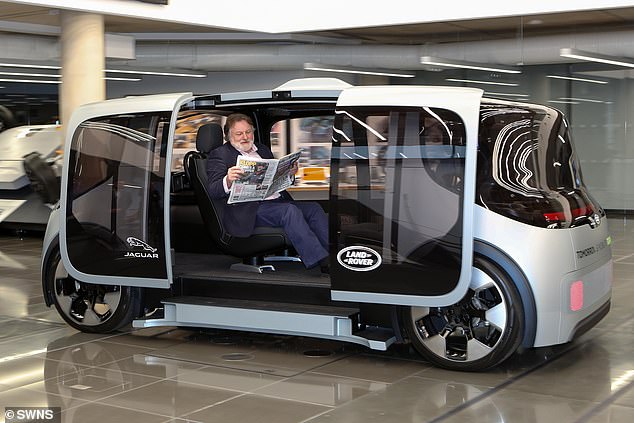