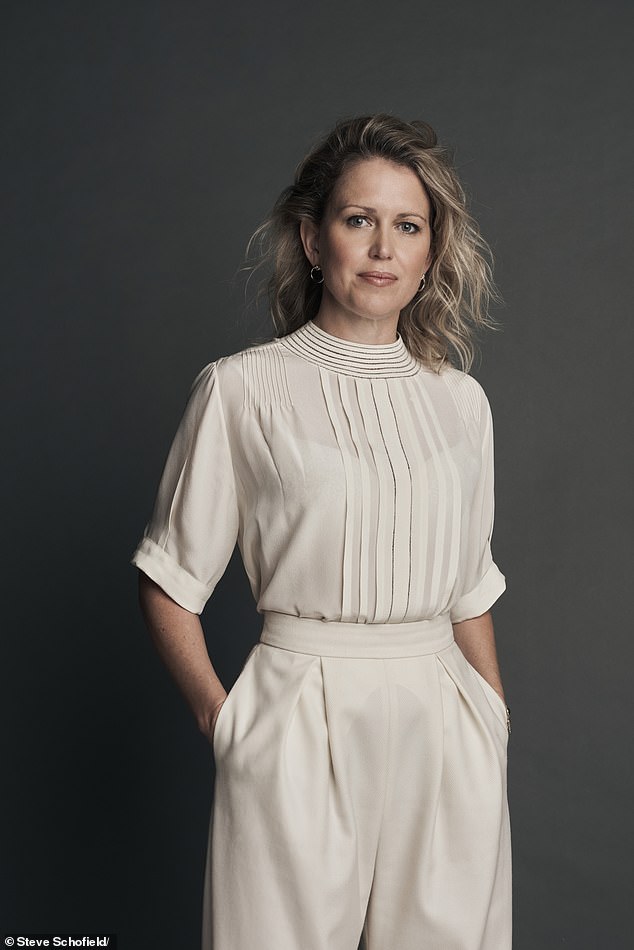 She’s the self-made girl from small-town Australia who was at the centre of this year’s biggest Hollywood court case and is fast making a name for herself as one of the world’s hottest lawyers. Julia Llewellyn Smith meets legal powerhouse Jennifer Robinson

When actress Amber Heard arrived at the High Court in London, back in July for her first day testifying against her ex-husband, Hollywood icon Johnny Depp, who was suing The Sun newspaper for claiming he was a ‘wife beater’, the world was struck by her dramatic appearance – all in black apart from a red bandana face covering.

The world also wanted to know who were the two glamorous women each holding one of Amber’s hands? One, also masked, was her sister Whitney; the other, unmasked (they were outdoors), in a figure-flattering Winser London dress, was the woman Amber has described as ‘the most important, treasured asset in my life as a human being, as a sister’: her lawyer Jennifer Robinson.

‘Amber is one of the most intelligent, hard-working and remarkable women I have ever met. It was really important for her that she had women’s support around her,’ says Jen – as everyone calls the Australian-born 39-year-old. She’s talking to me today from her home in London, just a day after the High Court verdict.

‘I found it to be a sad reflection on our society that although Amber was a witness and not on trial herself, we had to have security. Some days we had police protection. People were throwing things at our car, shouting abuse – we even passed a huge billboard saying “Ditch the witch”, with her face on it.’

Indeed, throughout the trial, fans of Pirates of the Caribbean star Depp waged a vicious social-media campaign against Amber, bombarding her (and Jen) with misogynistic abuse and even death threats. After her final day in the witness box, the crowd booed as she read out a statement, tackling the claims that she’d somehow ‘benefited’ from this unpleasant case. 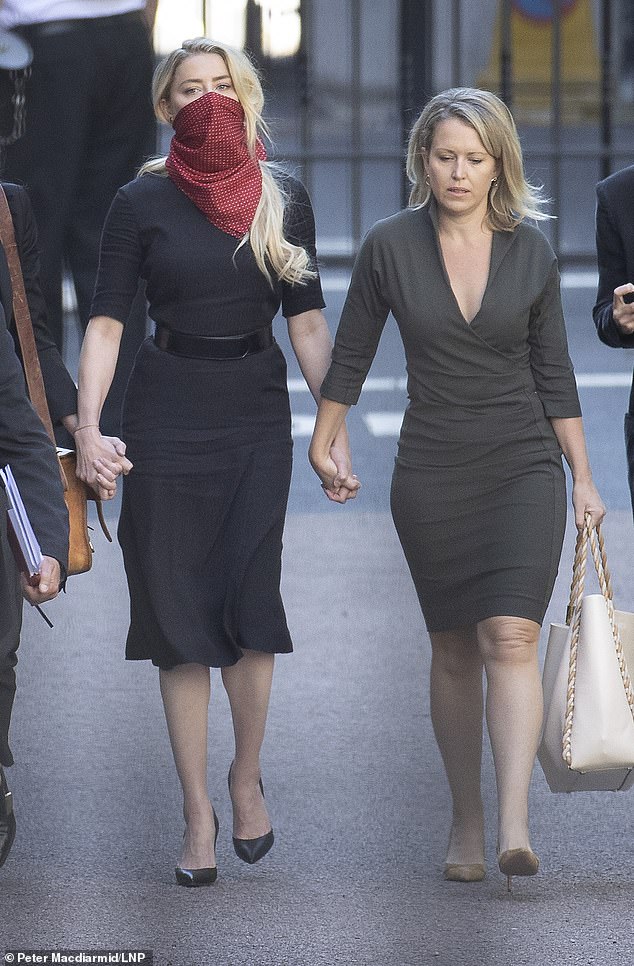 Jen (right) with Amber outside the high court in July

‘It has been incredibly painful to relive the break-up of my relationship, have my motives and my truth questioned, and the most traumatic and intimate details of my life with Johnny shared in court and broadcast around the world,’ Amber said.

‘It all upset me because it shows how far we still have to come in terms of how society reacts to women who’ve made allegations of domestic violence,’ says Jen, who to date has been best known for her decade-long defence of WikiLeaks founder Julian Assange.

Still, on the day we talk Jen is quietly jubilant, having just heard – following a four-month wait – that Depp has lost his case, with the High Court judge affirming he’d been physically violent towards Amber on at least 12 occasions, leaving her in fear of her life. ‘I was at home in East London, waiting for the verdict to drop. As soon as it came through I called Amber in Los Angeles,’ Jen says. ‘The judgement speaks for itself.’

Photos of Amber clutching a giant champagne bottle-shaped balloon outside her LA home made her delight obvious. But Jen, who’s been working with Amber since they were introduced by an American colleague three years ago, doesn’t even dare reveal whether she celebrated with a glass of champagne herself. ‘Though I am bit tired today,’ she admits cheerily.

The reason for Jen’s reticence is next year she’ll be defending Amber in a $50 million US defamation lawsuit from Depp over an article she wrote in the Washington Post, in which – without mentioning her ex’s name – she recounted how after speaking out about her experiences of domestic abuse, she was rapidly dropped from a film role and as the face of a global fashion brand. At the same time, Amber said she’d seen ‘how institutions protect men accused of abuse’.

Jen is legally bound not to discuss anything to do with the case. But she tweeted the reaction of her US co-counsel to the British verdict. ‘This decision and judgement are not a surprise. Very soon, we will be presenting even more voluminous evidence in the US.’

What Jen is happy to say is that Amber’s case has huge personal significance to her, since her grandmother ran a Sydney refuge for victims of domestic violence. ‘As a child I often visited with her, so these issues are very important to me,’ she says. ‘I have no time for women who don’t support other women. If things are going to change we have to stand together.’ Her attitude is shared by Amber, who’s a UN human rights champion and an ambassador for women’s rights for the American Civil Liberties Union. ‘I’m looking forward to working with Amber on an ongoing basis,’ Jen says. ‘We talk a lot about women’s rights and the work we need to do.’

It’s clear why Amber trusts Jen, who couldn’t be warmer or more down-to-earth. ‘I’m very Australian,’ she says. ‘I’m open, I’m easygoing, I take my work seriously but I don’t take myself at all seriously.’ She certainly gives no sense of being a high-powered lawyer, with her work, often pro bono (unpaid), that champions the rights of the disempowered, seeing her collaborate with the likes of Cherie Blair. ‘People always underestimate me,’ she chuckles. ‘They do so at their peril.’

Off-duty she has a glossy posse of friends that includes not only Amber, but her longstanding barrister colleague at Doughty Street Chambers Amal Clooney and her husband George. Six years ago, Jen attended the Clooneys’ Venice wedding, travelling up the Grand Canal in a speedboat shared with the actor Bill Murray. ‘That wedding was so much fun and such a happy occasion,’ Jen says. ‘Amal and I met through working on the Assange case together. She’s such a brilliant lawyer, who deserves every accolade, and seeing your friend find so much happiness – it’s the best.’

Growing up in the small town of Berry, New South Wales, 90 miles south of Sydney, Jen – the eldest of six children and a keen netball player, her dad a horse trainer and her mother a teacher – could never have imagined her glitzy future. ‘It was a really idyllic place to grow up, very safe. It felt like there was nothing to worry about.’ Still, Jen was ‘desperately curious about the world’. So she completed her legal studies at Oxford University and began practising as a barrister in London.

Ten years ago she was introduced to her compatriot Assange, who was planning to disseminate top-secret diplomatic cables revealing embassies’ often unsavoury backroom deals. ‘I remember sitting with this Australian with a backpack, who said, “Jen, I’ve got a quarter of a million diplomatic cables and I’m about to publish them. The US will chase me to the ends of the earth and make my life hell,”’ she recalls. ‘I had no appreciation of the significance of what he was saying and what I was signing myself up to. If anyone told me that ten years later, I would have been regularly visiting Julian in the Ecuadorian embassy [where he spent seven years as an asylum seeker to avoid extradition] with [his supporter] Pamela Anderson, I would have laughed in their face.’ 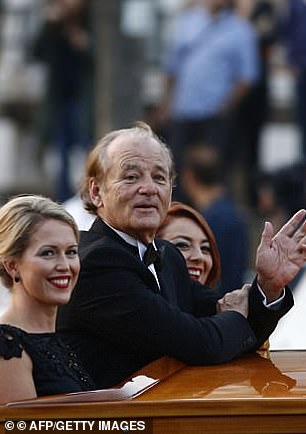 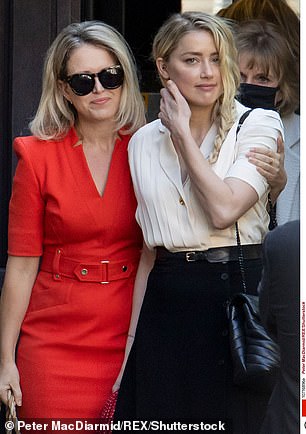 Left: In Venice with actor Bill Murray for Amal and George Clooney’s wedding, 2014. Right: Hugging Amber Heard outside the high court in July

But Jen is clear that Assange’s tale is no comedy. ‘Once he published, Julian was the most wanted man in the world. They were freezing his bank accounts and I was getting death threats – though the abuse I’ve had from working with Amber is worse.’

Jen realised she was being followed and her phone was being tapped. ‘Sometimes

it felt like I’d woken up in a spy movie. During the Assange extradition hearing I was personally targeted by a security company that was capturing not just legally privileged conversations but trying to find out more information about me. I was stopped from boarding a plane to Australia and told I was on a watch list and needed official approval to fly. Lawyers’ Rights Watch complained to the US government about the way it was treating an Australian lawyer in London. It’s the kind of thing that happens in countries like Mexico.’

It must have been scary. ‘I felt intimidated, of course I did, but as a lawyer I’m always more concerned about the threats towards my clients than towards me. It was horrible, but more than that it was unacceptable. Lawyers should be able to defend clients no matter how controversial they are and have confidential conversations with them. But now I’ve learnt governments don’t respect that, which makes it very difficult for our clients to have a proper defence.’

It’s challenging defending a man like Assange, who’s been attacked for publishing information that could have potentially endangered troops and security services. ‘There’s absolutely no evidence that anyone was harmed,’ Jen replies. ‘And look at WikiLeaks’ revelations about Americans spying on foreign leaders, of war crimes and torture. The public interest in these publications is undeniable.’

How does such a vocal feminist feel about defending a man accused by the Swedish government of rape and sexual assault charges (they’ve now dropped)? ‘Everybody deserves a defence, and it’s important that due process is followed,’ Jen says.

More generally, she adds: ‘Julian is one of the most intelligent people I’ve ever met. The strength that he’s had to have to withstand what he’s been through in the past decade is extraordinary. Those of us who’ve worked with him over the years were not surprised when it came out that he has Asperger’s, because that explains his focus and his memory for detail and also the fact that at times he can be very difficult. But he really deserves recognition for what he’s done.’

Now Assange is in London’s high-security Belmarsh Prison. ‘It’s horrific,’ Jen says. ‘His partner Stella [lawyer Stella Moris, who’s the mother of his children aged three and one] is a friend and colleague of mine. What they’re going through is so upsetting I can’t begin to describe it. He’s facing 175 years in a US jail for publishing information that has been nominated for the Nobel Peace Prize.’

The hearing for Assange to be extradited to the US is scheduled for 4 January, but Jen won’t be in court. Instead, depending on coronavirus restrictions, she hopes to be participating online from Australia, where she spent the first lockdown. ‘When I was younger I couldn’t wait to explore the world. But now I’m desperate to move home,’ she laughs. ‘It’s easier because hearings are remote. During lockdown I Zoomed into a High Court hearing in London from my mum’s basement in New South Wales.’ 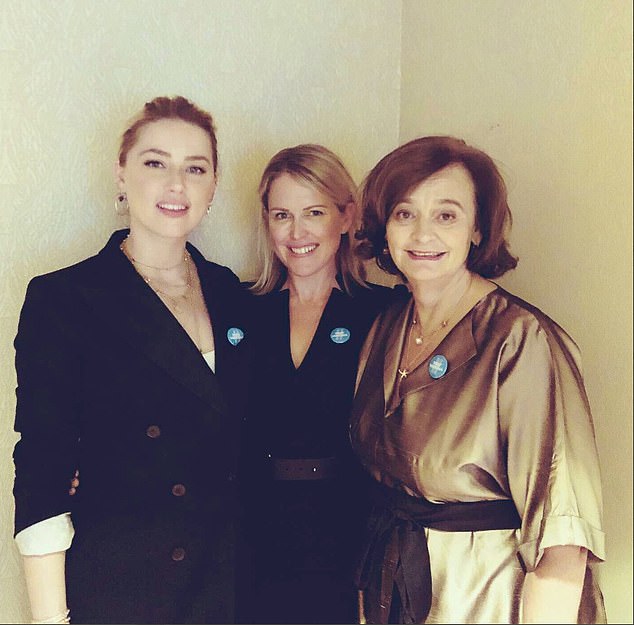 In Australia, Jen relaxes by surfing and riding. In London, pre-Covid, she enjoyed more of a work-hard, party-harder existence, with her once joking she ate out so much the only items in her fridge were champagne and mouldy cheese. ‘That’s still partly true, though these days I’m on more of a health kick so you might also see vegetable juices and kale.’

Jen won’t discuss her private life. Yet the passion with which she describes the difficulties her female barrister friends with kids encounter make you suspect she’s trying to work out how to fit in motherhood around her never-ending commitments. In the meantime, there’s a vast pile of cases to be tackled. ‘When you love what you do, it’s just too easy to work all the time,’ she sighs. ‘I’m always saying, “That’s enough”, and then an interesting case comes along and I’m, like, “Ooh, just one more, then!”’

One thing’s certain – again Covid notwithstanding – when Amber meets Depp again in court in Virginia in May, Jen will be supporting her. ‘Amber is so brave,’ Jen says passionately. ‘I am so proud to work with her.’ That feeling’s clearly mutual.