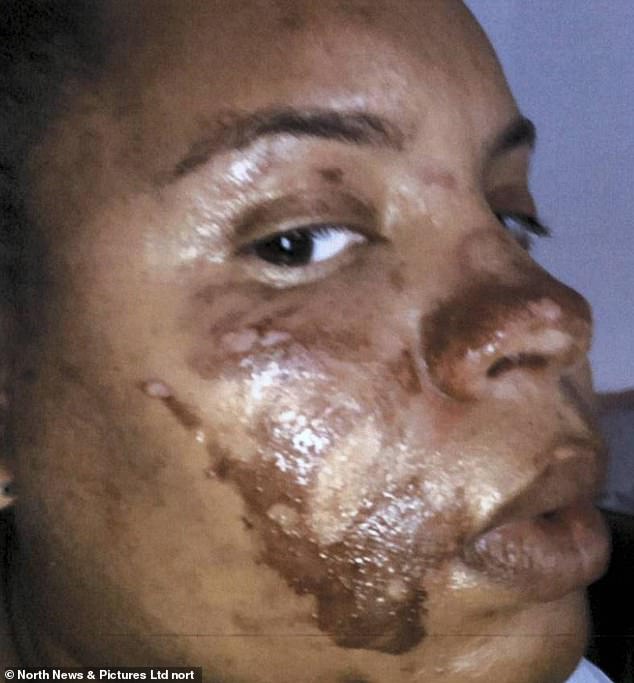 A mother-of-five was left with ‘napalm-like’ burns after a celebratory trip at the races ended with someone pushing a piping hot pie into her face.

Daniella Richards, 29, went to Ladies’ Day at Newcastle Racecourse with her mother, aunt, sister and friends in July 2018 to celebrate the birth of her child six weeks previously.

It was the first time she had been out since giving birth but her celebratory day at Gosforth Park ended in horror when she encountered a drunken woman in the toilets.

Miss Richards was holding a piping hot chicken and mushroom Pukka pie when the drunken woman, Rachel Turner, 37, started swearing at her and called her a racist name.

A mother-of-five (pictured, Daniella Richards, 29) was left with ‘napalm-like’ burns after a celebratory trip at the races ended with someone pushing a piping hot pie into her face

Then, in a shocking and unprovoked attack, Turner took hold of the Miss Richard’s hand and forced it and the pie into her face and ear.

She then tried to fight her as her face burned from the hot pie filling.

Miss Richards said: ‘I could feel my face burning and I was trying to scoop it off my face.

‘I was in a lot of pain and my face was boiling. I could feel my whole face burning and boiling and it was up my nose and on my nose.

‘There were lots of big blisters.’

She added: ‘It was completely unprovoked, there was no reason for it at all.’ 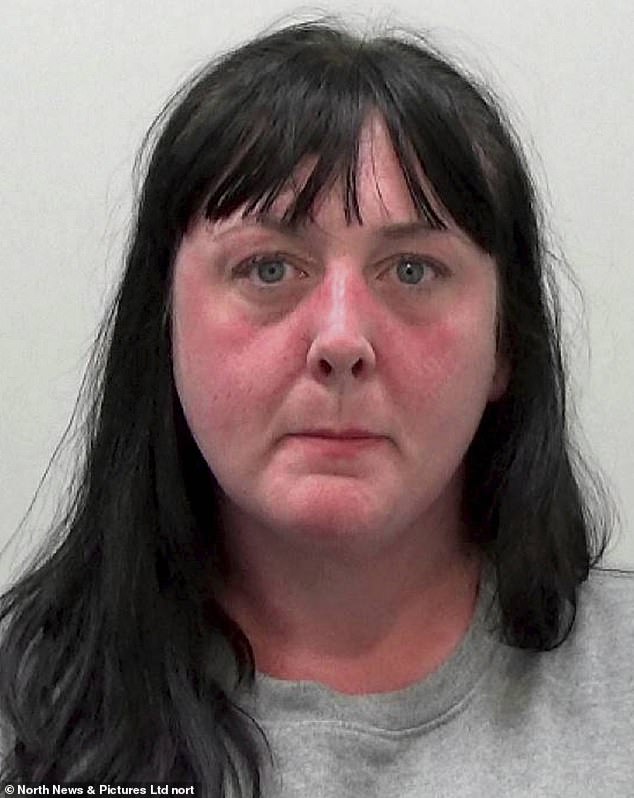 Miss Richards was holding a piping hot chicken and mushroom Pukka pie when the drunken woman, Rachel Turner (pictured), 37, started swearing at her and called her a racist name

Miss Richards was taken to hospital by ambulance and was treated at the burns unit.

The mother-of-five said her wounds have healed but there is discolouration to her skin.

However the mental impact persists and she has ended up on anti-depressants as a result of the attack and is having counselling for possible post traumatic stress disorder.

She said she doesn’t go out socialising any more around people drinking alcohol.

And she added that the experience has put her off pursuing a career in the criminal justice system, having done a degree in crime scene science.

Miss Richards also said she was disappointed the CPS did not pursue the original charge of it being a racially aggravated assault. 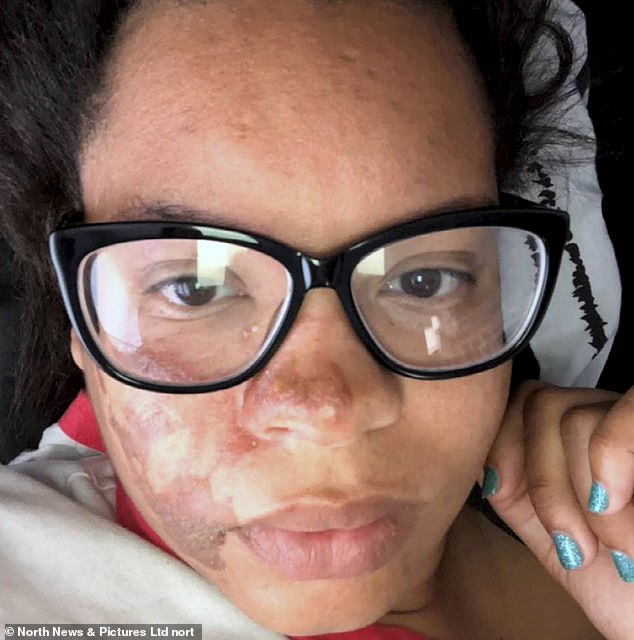 Miss Richards was taken to hospital by ambulance and was treated at the burns unit. The mother-of-five said her wounds have healed but there is discolouration to her skin

She told how it was the third time she has been the subject of racist abuse and she is considering returning closer to London, even though her family live in the North East and she has been here for 14 years.

Turner, of Fenham, Newcastle, admitted assault after the attack in July 2018 and has now been given a suspended jail sentence.

Prosecutor Matthew Collins told Newcastle Crown Court  trouble flared at an outside area, where the toilets were located at the racecourse during the summer event.

He said: ‘The defendant was outside and entered the ladies’ toilets.

‘There was some confrontation with a number of other, completely unrelated females and the victim in this case turned around to say ”what’s the problem”, the defendant said ”it’s got nowt to do with you, you fat b**** *****’ and pushed a pie, which the victim had been holding in her hand, into the victim’s face.

‘The pie was, in fact, a filled pie, a heated filled pie and the contents were so hot that they burned the victim’s face. Not, it has to be said, unlike napalm.’

In a victim statement, Miss Richards, of County Durham, said: ‘I distanced myself from family and friends because of my face, I was embarrassed.

‘I felt that everyone was going to be looking at me. I wouldn’t complete the school run or go to the shop for milk.

‘I was worried someone was going to ask about my face. I didn’t want to have those conversations.

‘The assault happened during the school holidays and as a result I was unable to take my children for days out as I had planned, we remained in the house for a significant part of the time.

‘When out, people asked me loads of questions. This constantly reminded me of the assault, bringing back a lot of negative emotions.

‘I was so distressed and concerned about what happened and the injury to my face. I was apprehensive to talk to anyone and it led to me avoiding people.

‘I missed my godson’s christening.

‘On the day I had had two drinks as I was breastfeeding. The offender who assaulted me appeared significantly intoxicated.

‘I am so anxious when I am out with people who have been affected by alcohol and have not been drinking alcohol in public places.’

The judge told her: ‘You involved yourself in some sort of altercation in the ladies’ lavatory, during the course of which you used racially abusive language towards the complainant and then you took her hand.

‘She was holding a pie, from which she had removed the top and you pushed her hand towards her face so the pie made contact with her face and it turns out it was extremely hot and has caused her permanent scarring.’

Jane Foley, defending Turner, said other people had thrown food during the trouble and added: ‘It is a highly regrettable incident that has left the defendant feeling a great deal of embarrassment and shame.

‘She is very sorry indeed.

‘When she pushed the pie into her face she couldn’t have known it was hot, or certainly did not expect it to be so hot it would cause the level of injury seen in this case. ‘

Miss Foley said Turner has a job and three children to look after but still finds time to work for a charitable organisation making food parcels for the homeless.