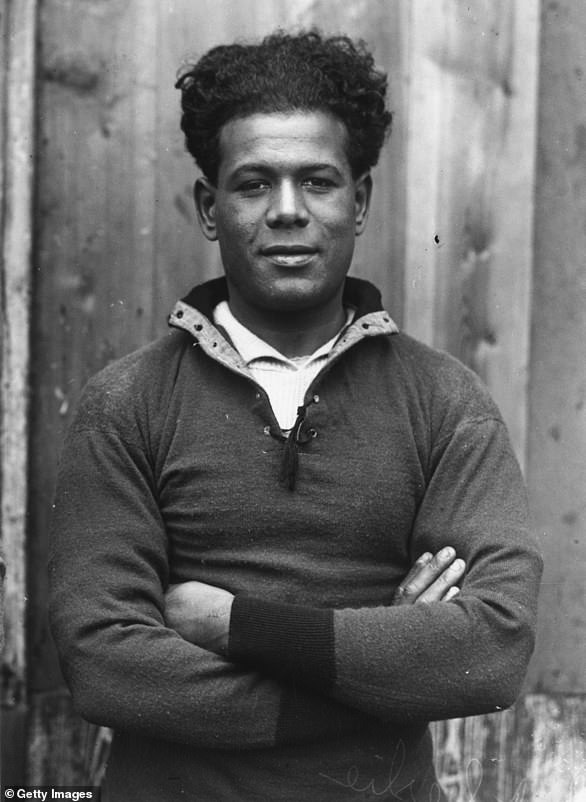 A council has been accused of being ‘racist’ for trying to rename a Plymouth square honouring slave trader and naval commander Sir John Hawkins after the city’s black football legend Jack Leslie.

Leslie, who played for the club in the 1920s and 1930s, was the only black professional footballer at the time and is believed to have missed out on a place in the England squad because of discrimination.

The decision to replace the name of an Elizabethan slave trader on the square beside the city’s magistrates’ court followed the Black Lives Matter protests in the wake of the death of George Floyd in police custody in the United States in May.

But there were a number of objections, and Plymouth businessman Danny Bamping submitted an appeal against the decision which was heard at Plymouth Magistrates’ Court on Friday morning.

The council denies the claims from Mr Bamping, and the court heard evidence setting out its case that it had properly followed its policies, national guidelines and the law governing street naming as laid out in the 1925 Public Health Act.

Mr Bamping, who once appeared on Dragons’ Den, argued the decision breached national guidelines as it was ‘racist’ because it was based on the colour of the player’s skin in response to the Black Lives Matter movement. 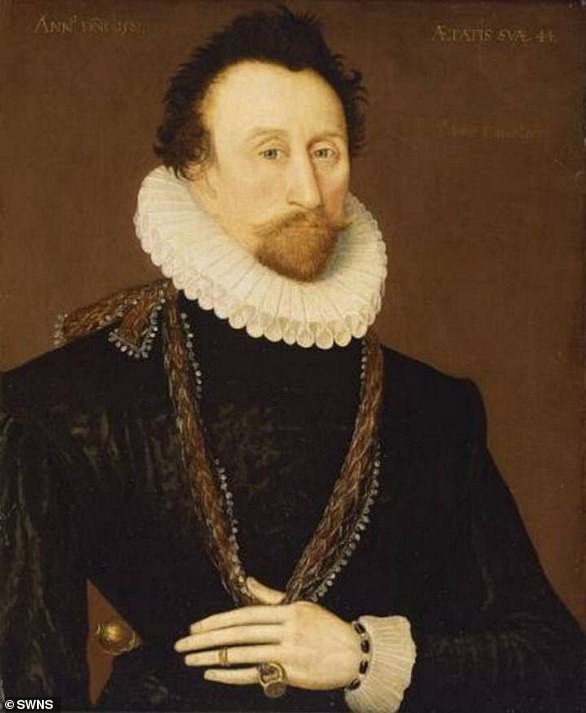 The square was originally named after Sir John Hawkins (pictured), who sailed from Plymouth in 1562 with three ships, before kidnapping around 400 Africans in Guinea and taking them to the West Indies to be sold

He claimed the council had failed to comply with its policy by not consulting about the change with people connected with the square, and he argued it had not properly consulted with Jack Leslie’s family.

He said the council should have considered other locations to name after the player, and proposed an unnamed road leading to the Home Park stadium of Plymouth Argyle, where a statue of the player will be placed.

Mr Bamping claimed the renaming decision was wrong and illogical because it did not take into account the full history of Sir John Hawkins, who was a Plymouth MP and played a leading role as a naval commander in the defeat of the Spanish Armada, at a time in history when slave trading was legal. 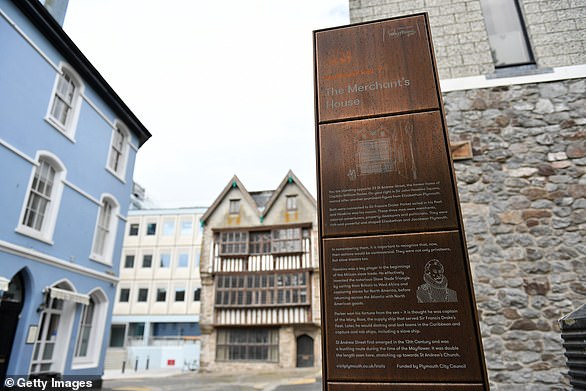 Sir John Franklin Square in the Barbican district of Plymouth commemorates the slave traders first sailing out to Africa with three ships, which he used to take 400 Africans into slavery

He argued that many people did not want the name changed, including 54 who had written to the court objecting to the decision, although their letters did not qualify as notices of appeal under the legal process.

Mr Bamping also argued that the 1925 Act used the word ‘alter’ rather than ‘change’ or ‘rename’, which he claimed meant councils could only make alterations to an existing name, rather than rename a street.

The council’s case is that it has the power to carry out the renaming under the Act and it has fully met with the requirements of the law, national guidance and its own policies on street renaming.

It says a notice of the proposal was properly posted on the square, there are no residents of the square to consult, the council obtained permission from Jack Leslie’s family, and it explained the decision and carried out the necessary consultation.

Jane Hirons, the council’s property team leader, told the hearing that she considered the authority had followed the correct procedure as set out in national guidelines and its own policy on street naming.

She said she had seen an email from Jack Leslie’s granddaughter giving the family’s consent to a street being named after him. She said she was satisfied it represented the views of the family, which met the council’s policy.

The court heard the council had been keen to protect the identity of the relative who sent the email, because of the concerns from members of Jack Leslie’s family who felt they were being ‘harassed’ by Mr Bamping, which he denied.

Mr Bamping claimed the council was ‘over-reaching their power’ to rename the square under the 1925 law, but Ms Hirons, responding to a question, said it did give the council powers to rename. 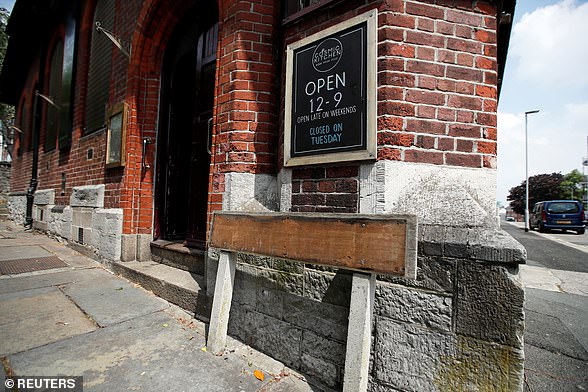 A street sign marking Sir John Hawkins Square was removed in June, following protests in the aftermath of the death of George Floyd

She also denied a suggestion from Mr Bamping that the proposal to rename the square after Jack Leslie was ‘because of the colour of his skin’, but said the Black Lives Matter movement was the ‘instigation’ for the change.

Ms Hirons said she considered the renaming of the square complied with a policy requirement that names should not be considered racist.

She gave evidence that the proper procedure had been followed by issuing a legal notice about the renaming proposal and fixing three copies of it around the square for 21 days.

The officer, responding to a question from Mr Bamping, said the suggestion of renaming a road near Home Park had not been put to Jack Leslie’s family, as it would not have been appropriate until the outcome of the appeal was known.

City councillor Chris Penberthy, the ward member for St Peter and the Waterfront, which includes the square, said he put forward Jack Leslie’s name from one of several which had been suggested to him.

The councillor said he had received complaints about the name of Sir John Hawkins Square before the Black Lives Matter movement in the summer, and the council had been considering how to deal with the issues it raised.

But the protests ‘brought things to a head’, not only in Plymouth but across the country and the world.

Cllr Penberthy disagreed with a suggestion from Mr Bamping that the renaming decision ‘set a dangerous precedent’. The councillor said it was ‘inflammatory’ to suggest other action would follow and added: ‘We are not going to be removing statues.’

Mr Bamping, summing up his case, told the court: ‘It is my position that no local authority in this country since 1925 has got the power to change or rename a road, because you need certainty on that issue.’ 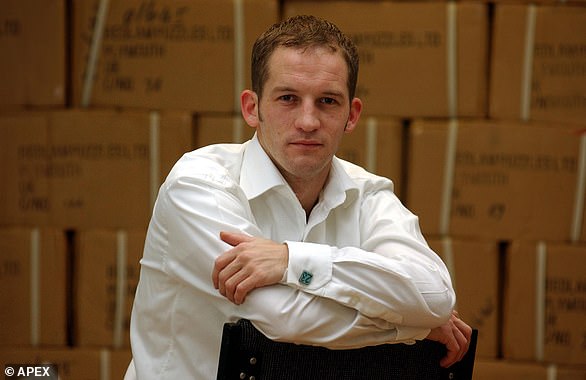 He argued Jack Leslie’s family should have been told that the renaming was a ‘contentious issue’, and claimed the council had ‘clearly not complied’ with the policy that a street name must not be considered racist.

He said the player’s name was being used to ‘appease a small minority who recognised Sir John Hawkins to be the first slave trader, which he was not, although he was involved in the slave trade.’

Mr Bamping said: ‘We cannot judge yesterday’s actions by today’s morals.’ He previously said: ‘The council has taken it on to rename the square purely on the colour of Jack Leslie’s skin.

‘He has nothing to do with the area – Sir John Hawkins did a huge amount for Plymouth. Jack Leslie kicked a football 80 years ago.’

Charlotte Davies, representing the city council, said the court had heard evidence that the authority had obtained the permission of Jack Leslie’s family.

The barrister said the national guidelines on street renaming had only had to be taken into account by the council. They advised not naming roads after a living person, and names should not be considered racist.

Ms Davies told the hearing that the council had considered the national guidelines and acted in accordance with its own policy in obtaining the permission for the renaming from Jack Leslie’s family.

In June council leader Tudor Evans said the council stood in solidarity with the Black Lives Matter movement and it had already started the process of renaming Sir John Hawkins Square on the Barbican. 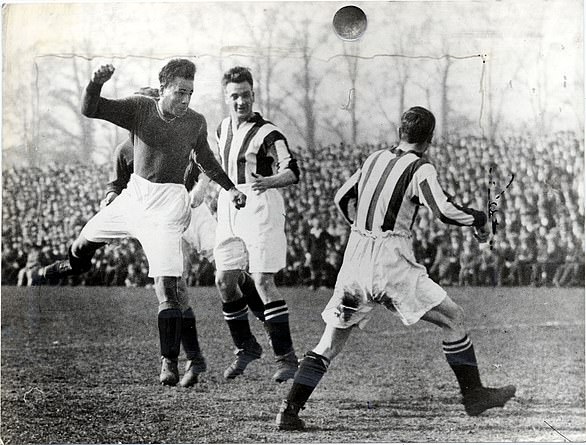 Leslie, left, who played for Plymouth Argyle from 1922 to 1934, was set to become the first black player to represent England until selectors were told withdrew his invitation

Cllr Evans said the city was proud of its naval heritage but the role of Elizabethan figures such as Sir John in the slave trade had perhaps been downplayed, and he understood the feelings of those who found the name offensive.

The square is in the Barbican district of Plymouth, where Sir John sailed from in 1562 with three ships, before kidnapping around 400 Africans in Guinea and taking them to the West Indies to be sold.

Mr Bamping has raised £60 in fees after mounting the legal challenge against the council to replace Sir John’s name.

‘Why would you want a square named after a slave trader? Imagine how some people feel walking past knowing their ancestors were involved with that person,’ she said.

‘The square could be renamed after a lot of people.

‘It just so happens someone started a petition for Jack Leslie and a lot of people signed it.

‘People who are against that are entitled to their opinion. They can start a campaign for another name if they want.’

District judge Jo Matson who heard the case said she would give her judgement on Friday, December 4.