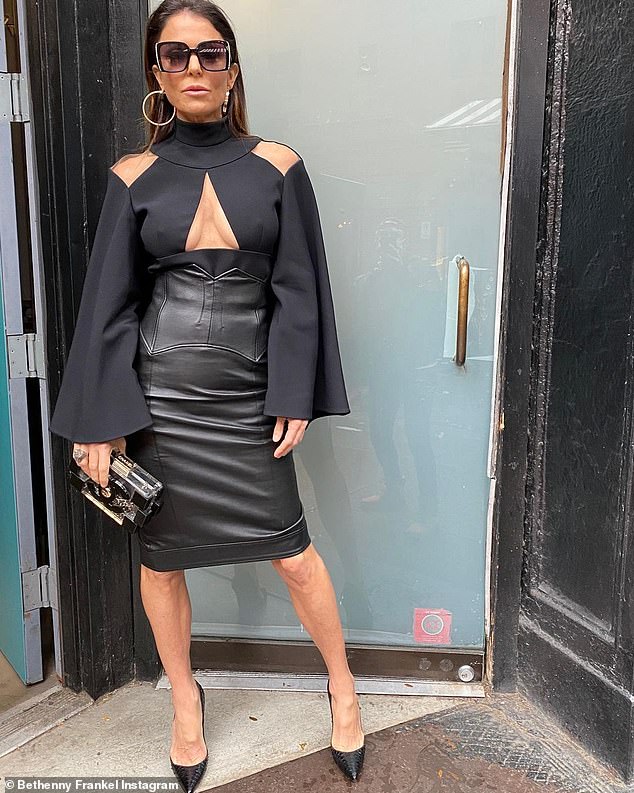 She’s the founder of the lifestyle brand, Skinnygirl.

And on Monday, one day after revealing she had been ‘feeling rundown and not feeling good,’ Bethanny Frankel stepped out dressed to impress in her hometown of New York City.

The Real Housewives of New York City alum showed off her lean curves and style when she posted a series of photos on Instagram decked out in a Tom Ford leather corset skirt.

Dressed to impress: Bethanny Frankel, 50, stepped out to the streets of New York City in a black leather corset skirt and a black cutout, long-sleeve top that gave a hint of her cleavage

Frankel paired the skirt with a black cutout, long-sleeve top by Balmain that gave a hint of her cleavage, while standing in an outside doorway,

Rounding out her ensemble, she rocked square Skinnygirl sunglasses, with Jennifer Fisher hoop earrings and pumps, according to Page Six. 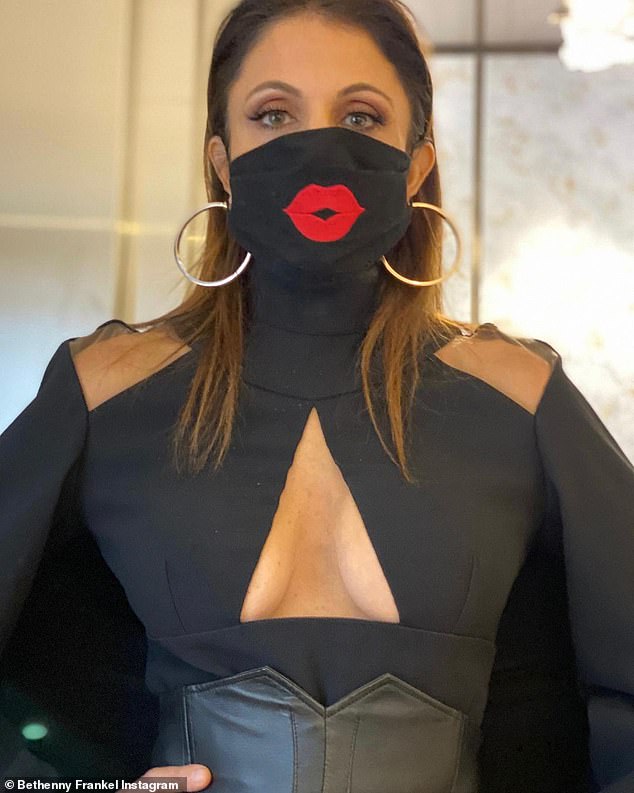 Safety with style: With the COVID-19 pandemic raging across the U.S., the Skinnygirl CEO also wore a black protective mask with big red lips on the front 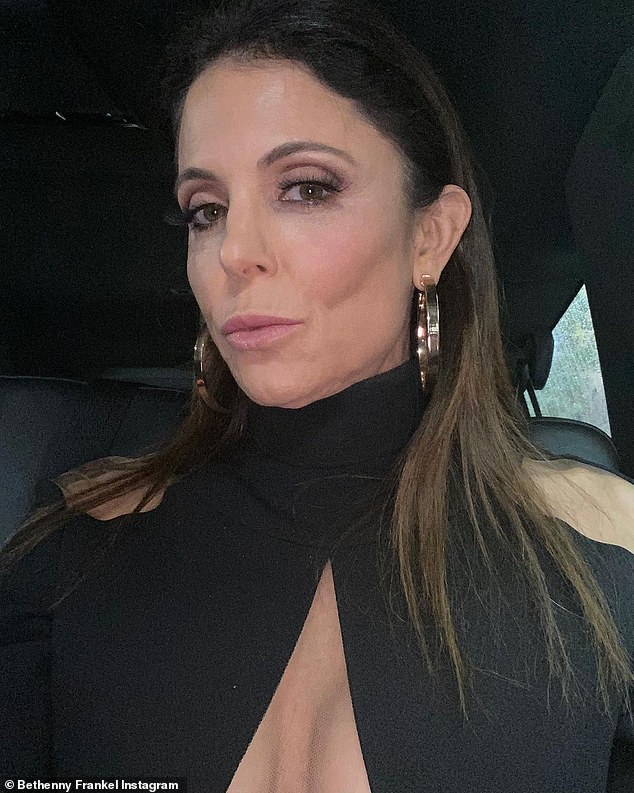 Lady in black: The Real Housewives Of New York City alum also struck a pose while being driven across town in NYC

It’s several years old. I buy and just sits with tags and waits,’ Frankel said of her outfit in the comments section.

The Skinnygirl CEO also shared a couple of close-up photos, including one where she donned a black protective mask with big red lips on the front.

She also struck a pose, maskless, while being driven across town.

Just before stepping out, the television personality and entrepreneur shared a headshot of herself wearing a mask with her image on it. 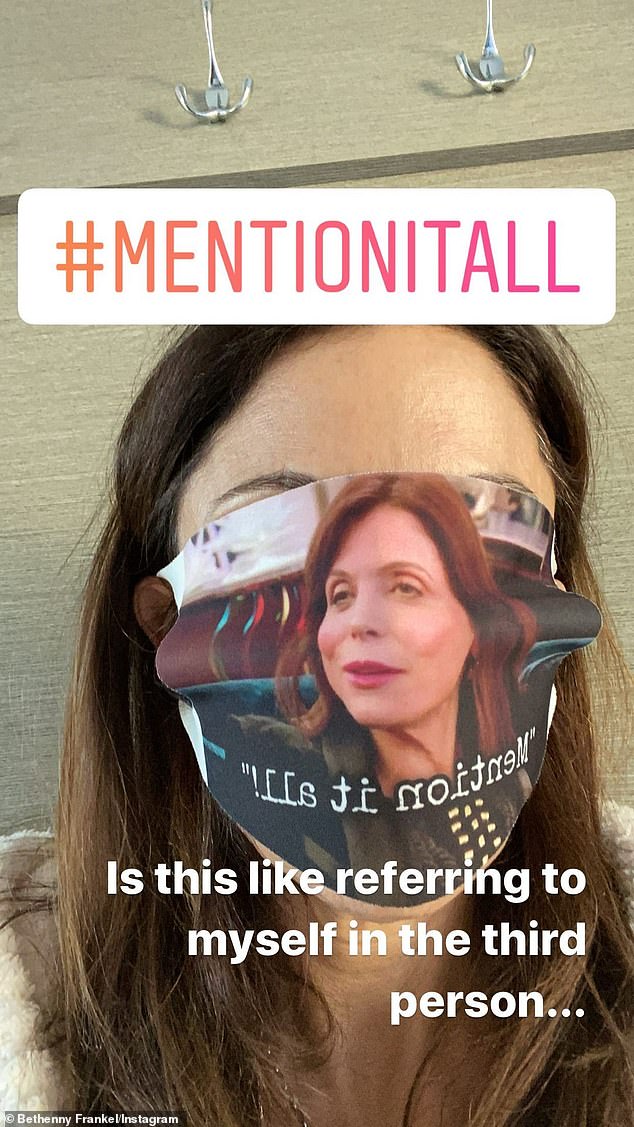 Homage to herself: The television personality and entrepreneur shared a headshot of herself wearing a mask with her image on it with ‘Mention it all’ written across it 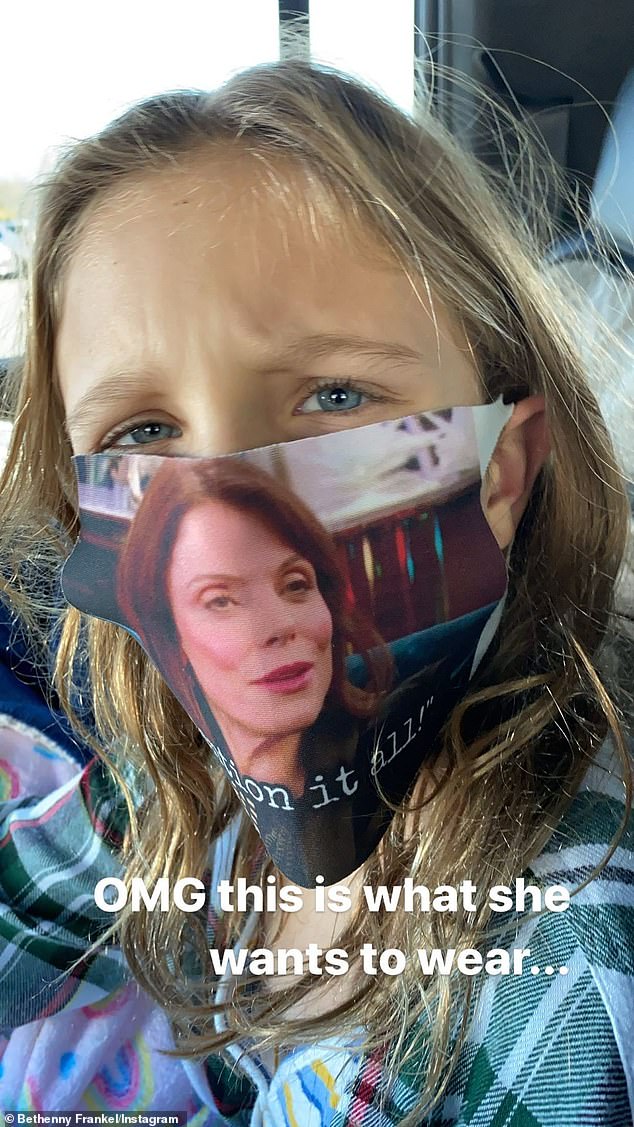 Like mother, like daughter: Even daughter Bryn, 10, donned the Bethanny mask, which is a reference to one of the unforgettable moments from Frankel’s time on RHONY

The mask also had ‘Mention it all’ written across it, which is a reference to one of the unforgettable moments from Frankel’s time on The Real Housewives of New York.

‘Is this like referring to myself in the third person,’ she joked across the bottom of the photo.

Her 10-year-old daughter Bryn followed suit and also donned a replica mask of her mother.

‘OMG this is what she wants to wear,’ Frankel commented on the pic.

Recently single, Frankel has been turning some of her focus to her new podcast, Just B With Bethanny Frankel, who most recently landed Hillary Clinton as a guest. 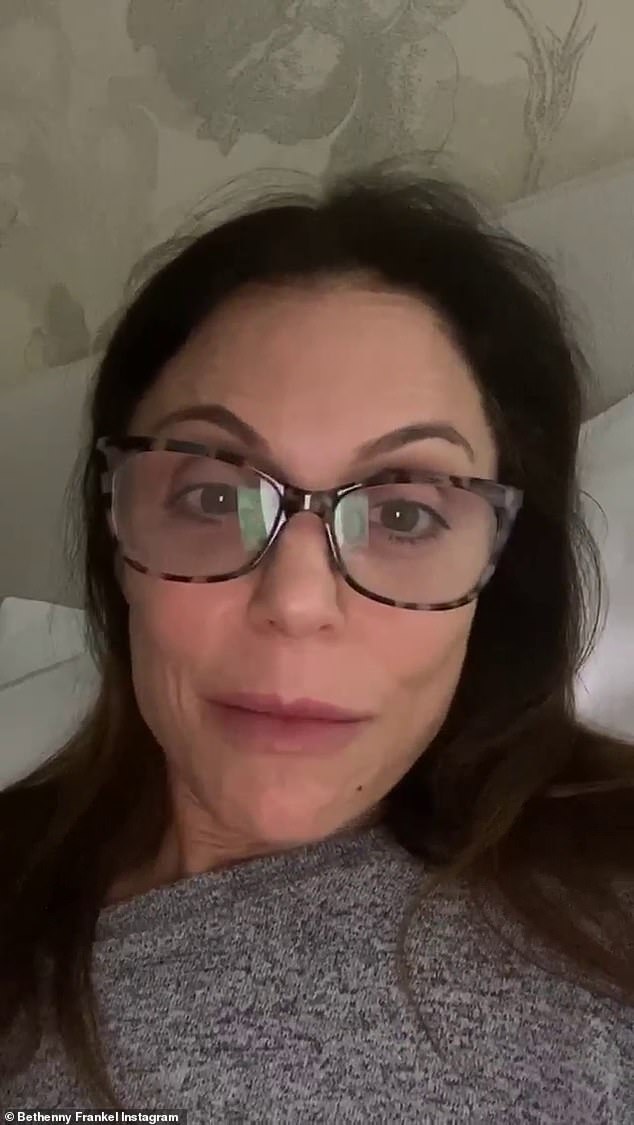 Confession: One day earlier, Frankel took to her Insta-Story and revealed she was ‘feeling rundown,’ in a video where she blasted people for assuming being ill is always COVID-related