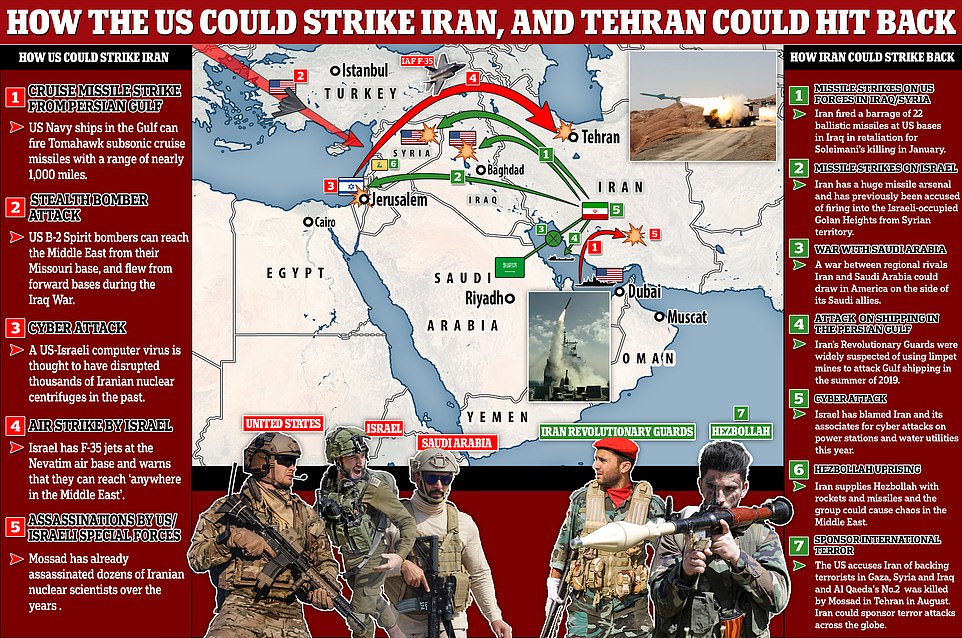 Iran warned today it would retaliate with ‘crushing’ force against the US if Donald Trump ordered a strike against the country’s nuclear facilities, after reports that he was considering it in the final weeks of his presidency.

Government spokesman Ali Rabiei warned that ‘any action against the Iranian nation would certainly face a crushing response’ after US officials told the New York Times that Trump had asked about ways to punish Iran for its nuclear build-up.

The Pentagon’s strike plans against Iran are thought to include missile attacks, cyber-warfare, and pre-emptive action by Israel, which has previously carried out a series of operations against Iran.

While Trump’s advisers talked him out of a military strike, he might still look at other ways to hit Iran, officials said – weeks before he is due to hand power to Joe Biden who wants to re-enter the 2015 nuclear pact with Tehran.

Trump’s Oval Office meeting came a day after inspectors said Iran had increased its stockpile of nuclear material and barred access to another site.

Donald Trump reportedly asked advisers for a list of options on how to take action against Iran, which could include a missile strike, a cyber-attack or an operation involving Israel. But Iran warned today that any US action would be met with a ‘crushing’ response. Tehran previously fired missiles at US bases in Iraq in retaliation for the killing of general Qassem Soleimani in January, and Iran is also suspected of being behind cyber-attacks and mysterious explosions on Persian Gulf shipping 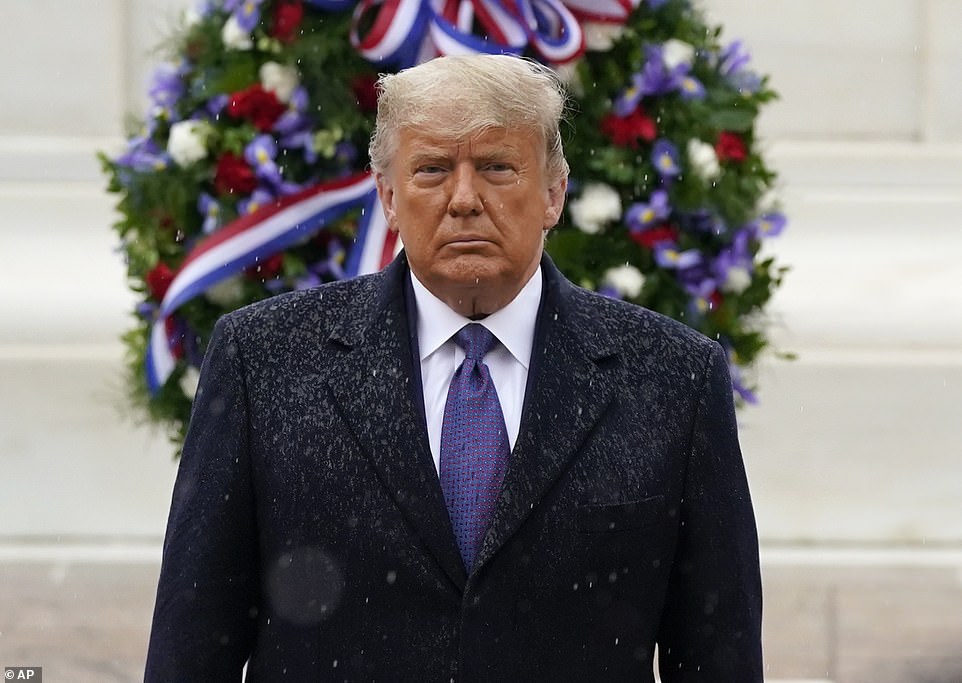 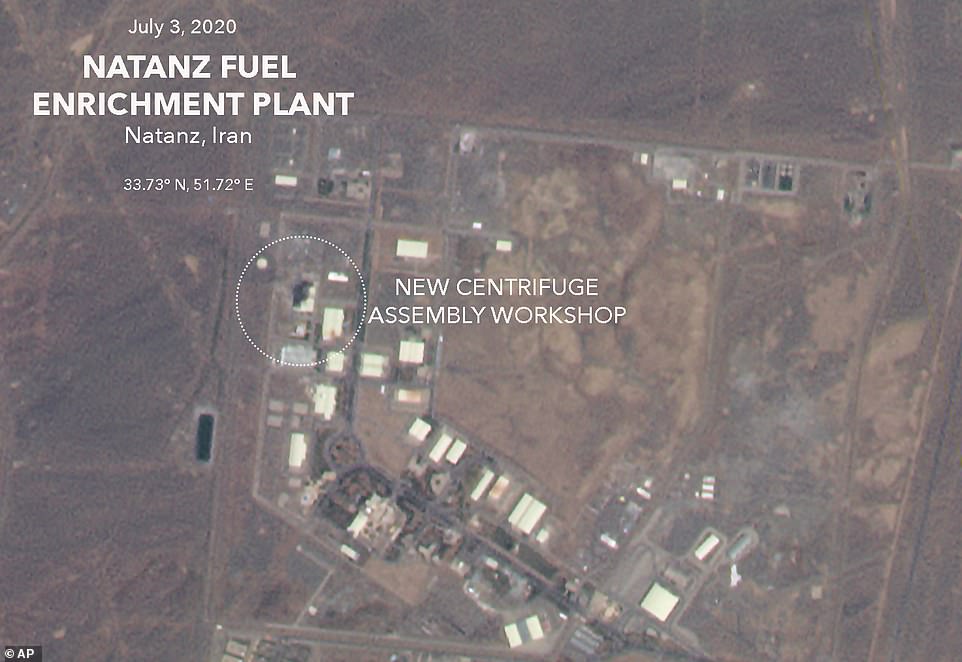 Trump’s advisers ultimately dissuaded him from launching a strike by warning that such action could trigger a wider conflict with Iran, the officials said.

A source confirmed the NYT’s account of the meeting to Reuters, saying: ‘He asked for options. They gave him the scenarios and he ultimately decided not to go forward.’

Any missile strike or cyber-attack would likely have targeted Iran’s main nuclear enrichment facility, Natanz, which Tehran insists is meant for peaceful purposes.

Most of the complex is underground and it is subject to monitoring by the International Atomic Energy Agency (IAEA) under the nuclear accord.

In its latest report, the IAEA said Iran’s uranium stockpile is now 12 times larger than the limit set under the Obama-era pact which Trump abandoned in 2018.

The agency said that as of November 2 Iran had a stockpile of around 2,440kg of low-enriched uranium, up from 2,100kg on August 25.

The limit under the deal signed with Britain, France, Germany, China and Russia is just over 200kg.

The IAEA also reported that Iran has also been continuing to enrich uranium to a purity of up to 4.5 per cent, higher than the 3.67 per cent allowed under the deal.

The UN watchdog said that Iran had barred its inspectors from accessing another site where there was evidence of past nuclear activity.

While Trump decided against a missile strike, he may still be looking into ways to strike Iranian assets and allies, including militias in Iraq, it is believed.

The US accuses Iran of backing terrorists in Gaza, Syria and Iraq, including a group who attacked the US embassy in Baghdad last December.

Trump’s policy of ‘maximum pressure’ has also seen the US military carry out cyber-attacks against Iran, which in turn has been linked to cyber-attacks on power stations and utilities in Israel during 2020.

The US was also behind an Israeli operation in Iran which killed al-Qaeda’s deputy leader Abdullah Ahmad Abdullah, according to a separate NYT report last week.

Abdullah, who went by the nom-de-guerre Abu Muhammad al-Masri. was secretly shot and killed in Tehran by Israeli operatives on a motorcycle at Washington’s behest, it is claimed.

The operation is said to have taken place on August 7 on the anniversary of the 1998 US embassy bombings in Tanzania and Kenya, which were carried out by al-Qaeda.

Iran denied the report of Abdullah’s killing, claiming on Saturday that it was ‘made-up information’ and blaming US policies for the emergence of al-Qaeda.

But Washington has previously accused Iran of harboring members of the terror group behind 9/11 and allowing them to pass through its territory. 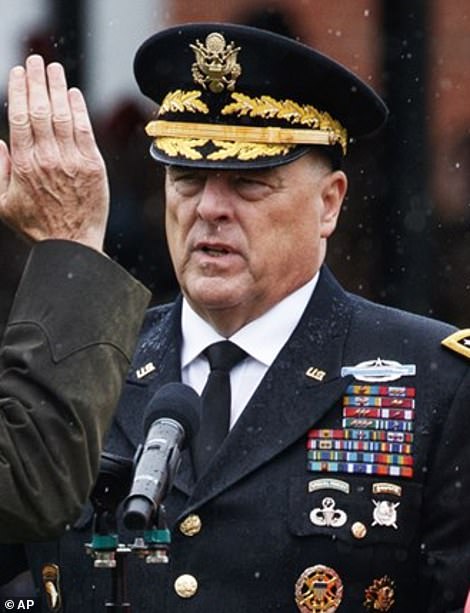 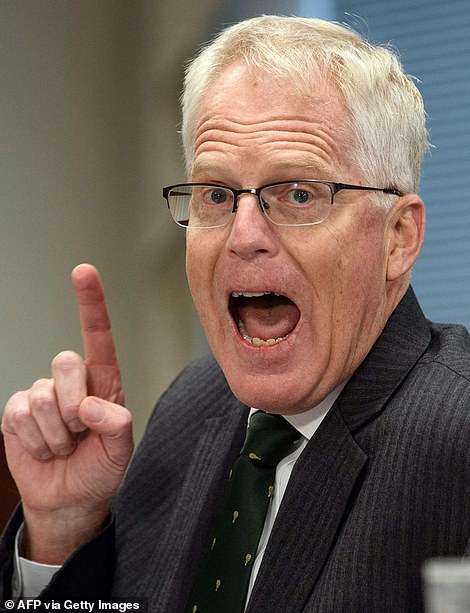 US president-elect Joe Biden has said he intends to revive the Iran nuclear accord when he takes office in January, but that plan could be thrown into jeopardy if tensions between the US and Iran escalate in Trump’s final weeks.

Pentagon officials and others are said to have grown increasingly concerned about the prospect of Trump taking action against Iran before the end of his term.

During the meeting last Thursday, Trump’s advisers reportedly acknowledged that Biden would be taking over the White House next year, even though Trump himself has refused to concede.

The advisers questioned whether the Trump administration should retaliate against Iran before Inauguration Day because of Biden’s intention to return to the nuclear accord, sources told Fox News.

Iran has openly announced all violations of the nuclear deal in advance, which have followed the decision by the US to pull out unilaterally in 2018.

Since the US withdrawal and imposition of new sanctions, Tehran has been putting pressure on European countries to come up with new ways to counter US sanctions.

At the same time, the Iranian government has continued to allow IAEA inspectors access to its nuclear facilities, which the remaining JCPOA countries argue is a reason to preserve the deal.

something the country insists it does not intend to do.

An analysis by the Washington-based Arms Control Association suggests that Iran now has more than double the material it would need to make a nuclear weapon.

However, IAEA director-general Rafael Grossi said in an interview last month that his agency does not share that assessment.

Before agreeing to the nuclear deal, Iran enriched its uranium up to 20 per cent purity, which is a short technical step away from the weapons-grade level of 90 per cent.

In 2013, Iran’s stockpile of enriched uranium was already more than 7,000 kilograms with higher enrichment.

In the quarterly report distributed to members last week, the IAEA said it still has questions from the discovery last year of particles of uranium of man-made origin at a site outside Tehran not declared by Iran. 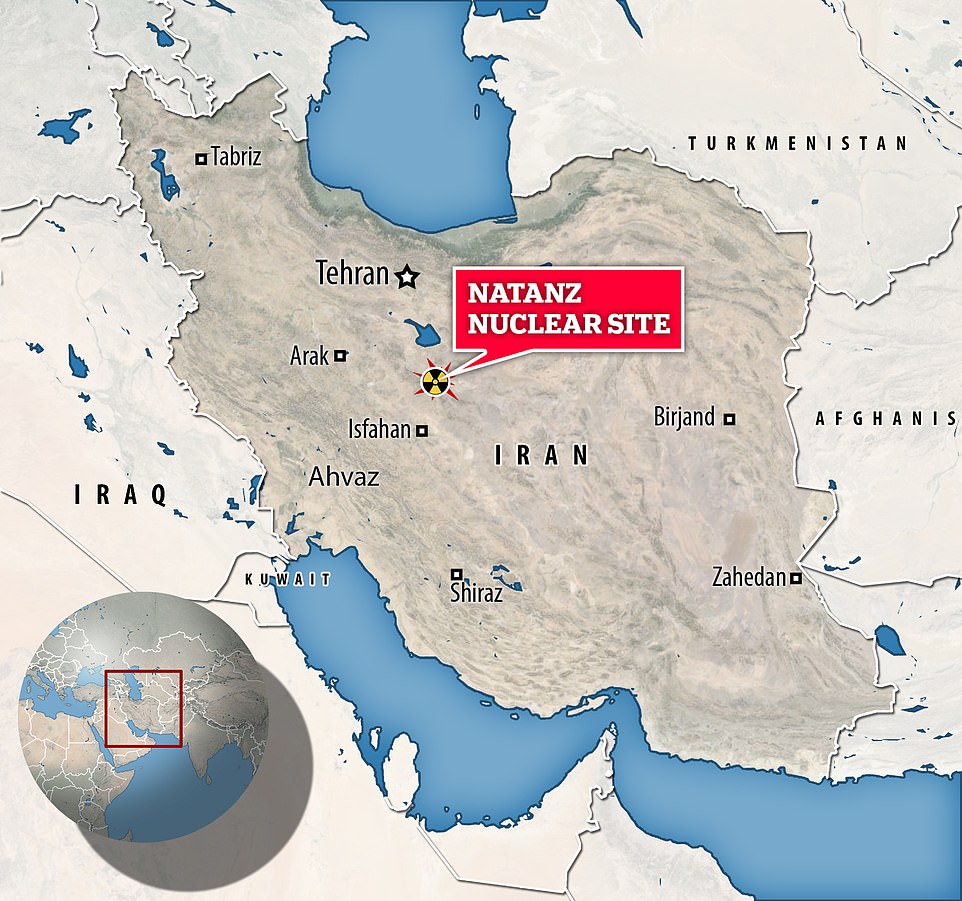 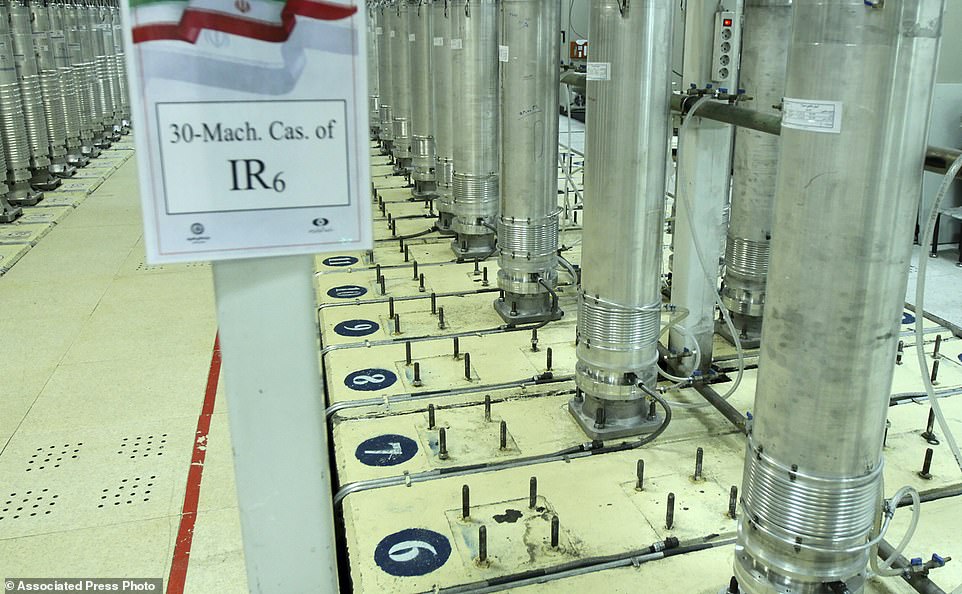 The United States and Israel had been pressing the IAEA for some time to look into the Turquzabad facility, which Israeli Prime Minister Benjamin Netanyahu described to the UN in 2018 as a ‘secret atomic warehouse’.

In the current report, the IAEA said the ‘compositions of these isotopically altered particles’ found there were ‘similar to particles found in Iran in the past, originating from imported centrifuge components’. It said it found Iran’s response to questions last month ‘unsatisfactory’.

‘Following an assessment of this new information, the agency informed Iran that it continues to consider Iran’s response to be not technically credible,’ the IAEA wrote last week. ‘A full and prompt explanation from Iran…is needed.’

Grossi, the IAEA director, told the UN general assembly last Wednesday that ‘evaluations regarding the absence of undeclared nuclear material and activities for Iran continue’.

Inspections have taken place and samples from the sites are being analysed, he said.

Iran’s UN ambassador, Majid Takht Ravanchi, told the assembly that ‘Iran and the agency have agreed to work in good faith to resolve these safeguards-related questions’.

Ravanchi also said it is ‘of utmost importance’ for the IAEA to consider available information on the nuclear activities of Saudi Arabia, its regional rival.

‘If Saudi Arabia is seeking a peaceful nuclear program, it should act in a very transparent manner and allow the agency’s inspectors to verify its activities,’ he said.

He said the IAEA also needs to take ‘an unbiased and professional approach’ toward Israel, which is not a party to the Nuclear Nonproliferation Treaty and is widely believed to possess nuclear weapons.

Natanz, also known as the Pilot Fuel Enrichment Plant, is one of Iran’s central nuclear enrichment facilities, located around 200 miles south of the capital in Tehran.

It became subject to monitoring by the UN watchdog International Atomic Energy Agency after Iran inked a nuclear accord with US, Germany, France, Britain, China and Russia in 2015.

Last week the IAEA released a report which found that Iran’s uranium stockpile at Natanz is now 12 times larger than the limit set under the nuclear accord.

The nuclear deal allows Iran only to keep a stockpile of 202.8 kilograms (447 pounds).

The IAEA report also acknowledged that Iran was building an underground advanced centrifuge assembly plant after its last one exploded in an apparent sabotage attack last summer.

Images released the same day as the report showed that construction had begun at Natanz.

Since August, Iran has built a new or regraded road to the south of Natanz toward what analysts believe is a former firing range for security forces at the enrichment facility, images from San Francisco-based Planet Labs Inc. show.

One of the images taken on November 9 shows the site cleared away with what appears to be construction equipment there, while an October 21 image from Maxar Technologies shows trucks, cars, backhoes and other vehicles at the cleared site.

Analysts from the James Martin Center for Nonproliferation Studies at the Middlebury Institute of International Studies say they believe the site is undergoing excavation. 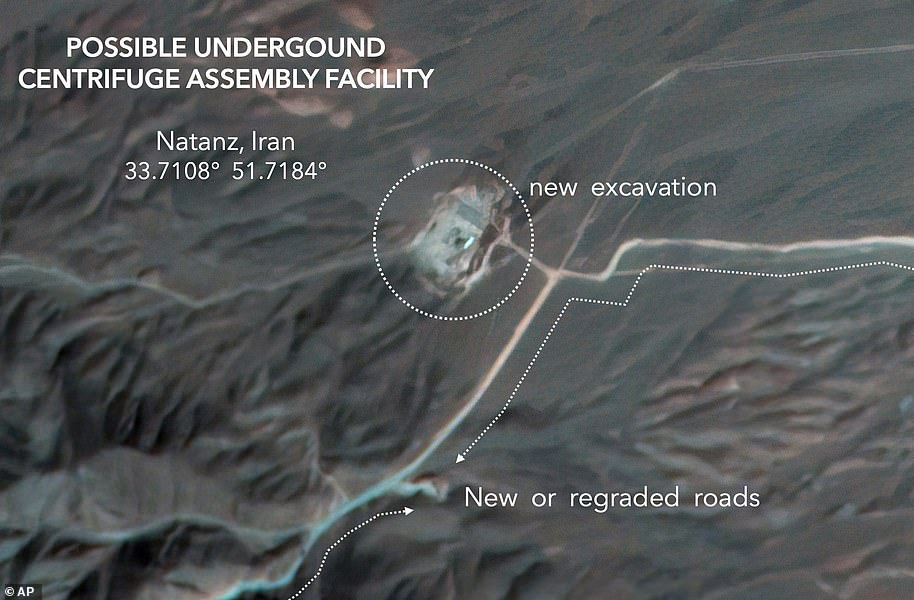 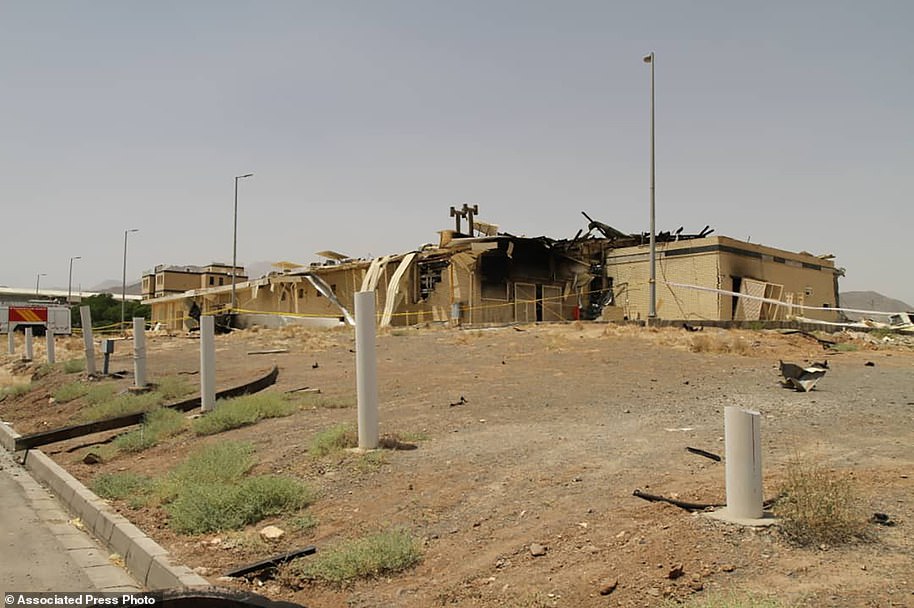