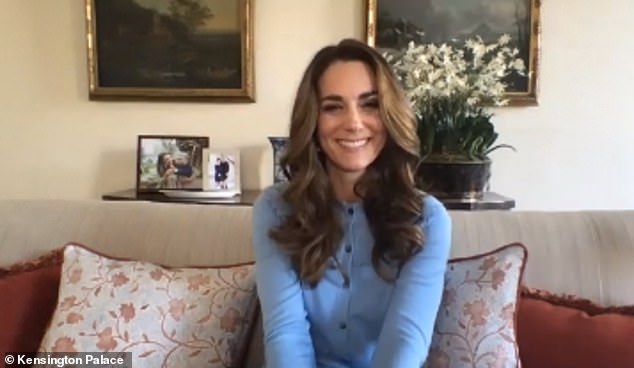 Kate Middleton has shown her support for the British high street this week by donning a baby blue cardigan from Boden as she marked the end of her Hold Still digital exhibition.

The Duchess of Cambridge, 38, released a new video message over the weekend to mark the end of her UK-wide Hold Still community exhibition with a message thanking everybody who submitted a portrait to the project.

The mother-of-three recycled a red Zara jacket for the call, and added a touch of glamour by wearing a new £285 ‘organic nature-inspired necklace’ from English female designer Alex Munroe.

Meanwhile Kate selected a £75 baby blue scalloped cardigan from British brand  Boden as she took part in the video call with one of the photographers, Johannah Churchill, from one of the sitting rooms in Apartment 1A, the four-storey Kensington Palace home she shares with husband William, 38, and their children George, seven, Charlotte, five, and Louis, two.

Kate Middleton, 38, showed her support for the British high street by donning a baby blue cardigan from Boden as she marked the end of her Hold Still digital exhibition 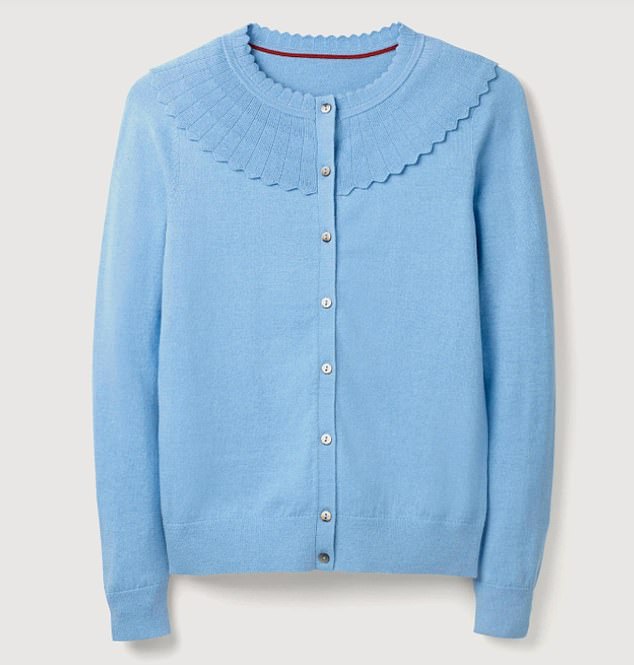 The natural beauty wore her hair in a bouncy blow-dry, and kept her make up natural for the occasion.

Perfect for the autumn to winter transition, Kate’s ‘frosted blue’ cardigan is described online as lightweight yet warm.

It features a scalloped collar and sophisticated gathered sleeves give it a feminine finish.

While known as a quintessentially British brand, it may also have been chosen by the Duchess for its credentials in sustainability. 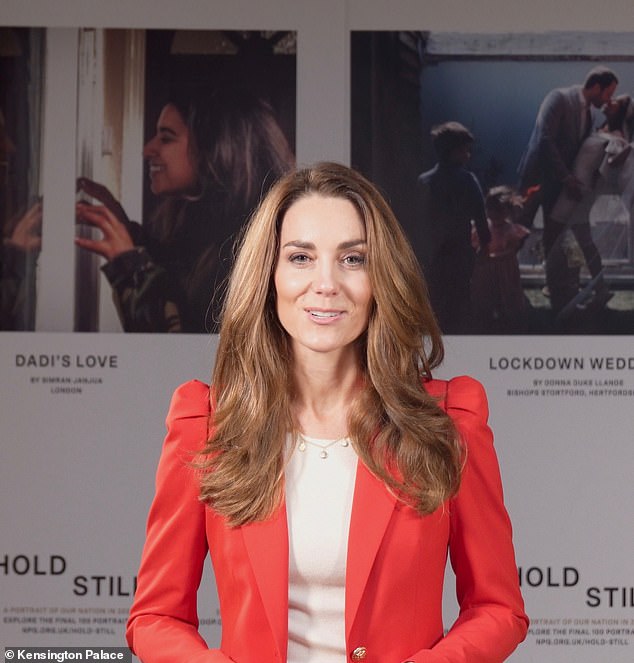 Meanwhile in a separate video message released to mark the end of the Hold Still community exhibition, she wore a £285 necklace from British designer Alex Munroe 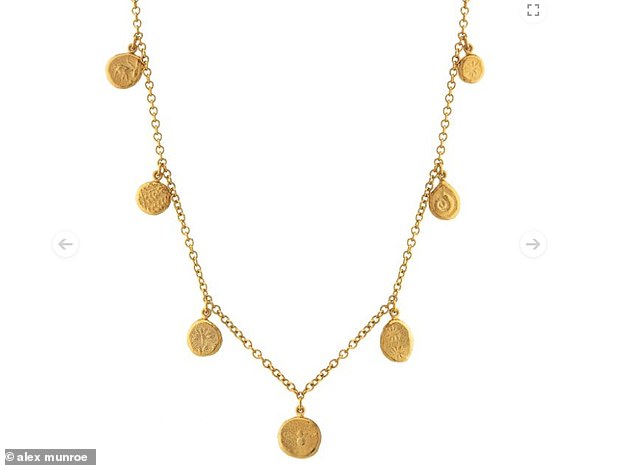 The gold ‘organic nature-inspired’ pendant, which costs £285, is described online as part of Alex Munroe’s Natural History collection, which could be a nod to Kate’s patronage the Natural History Museum

The brand has proved itself to be a favourite of the Duchess during the coronavirus pandemic.

In May, the royal selected a £120 baby blue wrap dress from the label for a virtual visit to a maternity ward.

Meanwhile in August, photographs were released of the Duchess wearing for a £112 green shirt dress from Boden as she made a private visit to a baby bank.

The cardigan is not the only British label the royal wore during the virtual appearance. 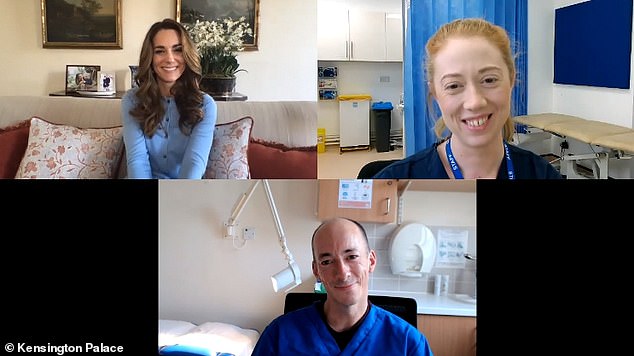 During the video call, Kate chatted with Johannah Churchill, whose portrait ‘Melanie, March 2020’ was recreated as a mural in Manchester, and her colleague Dr Edward Cole

The mother-of-three also supported independent jewellery designer Alex Munroe by opting for a dangling gold necklace from her brand.

The paleontology nugget necklace is described online as ‘detailed with fossilised nuggets etched with botanicals, animals and Alex’s iconic bumblebee’.

The piece is part of the ‘Natural History’ collection, which aims to ‘captures the breath-taking wonder of a first visit to a grand Museum’.

The choice could be seen as a nod from the Duchess to one of her other patronages, the Natural History Museum. 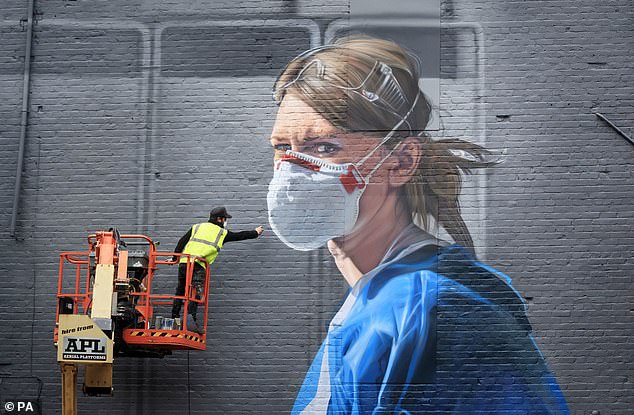 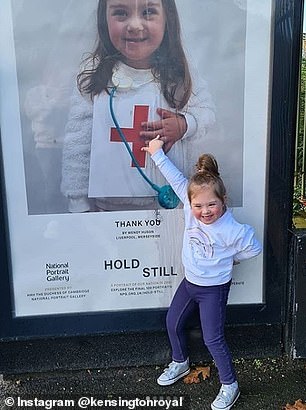 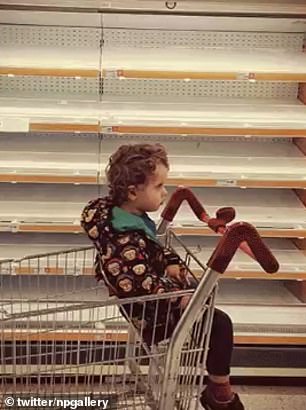 Amelia May, posing beside her own image, in which she’s dressed in a nurse’s uniform, entitled ‘Thank You’, in Merseyside (left). Another of the images chosen by the Duchess for her community photography project was a photograph of a young boy staring out at empty supermarket shelves (pictured)

During the video messages, which were released at the weekend, Kate said: ‘For me, the most powerful part of the project is that it has shown just how much people and communities have come together and how important we all are to each other.’

Earlier this week, the mother-of-three also spoke to Johannah, whose portrait ‘Melanie, March 2020’ was recreated as a mural in Manchester as part of the community exhibition of 100 photos, which has been viewed 5.2 million times online, as well as being displayed in 80 locations across the UK.

During the call, they discussed the important role the photograph has played in helping to represent the experiences of frontline workers across the nation as they continue to tackle the COVID-19 outbreak.

The Hold Still initiative, launched in May in collaboration with the National Portrait Gallery, aimed to capture and document ‘the spirit, the mood, the hopes, the fears and the feelings of the nation’ as the UK dealt with the coronavirus outbreak.