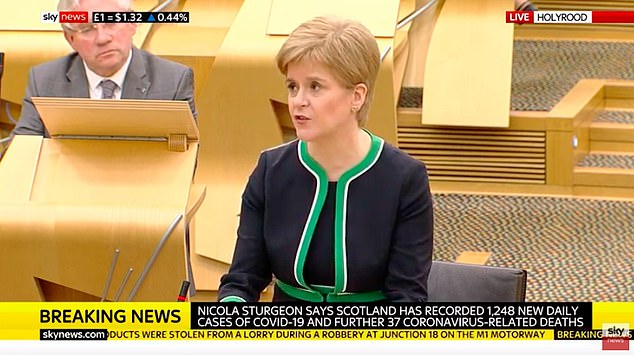 Nicola Sturgeon today announced 11 local authority areas will be moved into Scotland’s toughest coronavirus level at the end of the week as she warned infection rates are still ‘stubbornly’ high.

The First Minister said the 11 council areas, which includes the city of Glasgow, will be subject to level four restrictions from 6pm on Friday.

People living in the level four areas will be banned from meeting with other households indoors while only essential shops will be allowed to stay open.

Ms Sturgeon said her message to people in those areas is that they ‘should not be going out and about’ and that the measures will be in place for three weeks, lifting on December 11.

Ms Sturgeon said there was ‘grounds for continued and significant concern’ in all of the areas being moved into to Level Four.

As well as the 11 areas being elevated to level four, two areas are being moved from level three to level two while 19 will experience no change.

Ms Sturgeon said the move into Level Four is intended to be ‘short and sharp’ as she set out her hopes that the measures will result in a significant drop in infections which will pave the way for restrictions to be eased at Christmas.

The First Minister told MSPs: ‘I know people are frustrated that other restrictions have remained in place longer than planned.

‘But Level Four is intended to be short and sharp. And in this situation, it is specifically intended to have an impact in advance of Christmas and the most challenging winter period.

‘Lifting the Level Four restrictions then – as we will do – also means that they will not be in place for most of the Hanukkah period – so again, while celebrations may be different, there will be a greater degree of freedom.

‘We will assess nearer the time the level that will apply in each area when the Level Four restrictions end on December 11.’

East Lothian and Midlothian will move to Level Two after they recorded a ‘marked decline’ in the prevalence of the virus.

Ms Sturgeon said: ‘On that basis, assuming no significant deterioration before then, I can confirm that East Lothian and Midlothian will move from Level Three to Level Two from next Tuesday 24 November.

‘Between now and then, the local authorities will be able to undertake necessary environmental health and compliance checks, and work with NHS Lothian to minimise any risk of increased transmission that the move to Level 2 will bring.’

The announcements came as Ms Sturgeon said restrictions on household gatherings put in place in recent weeks have helped to control the spread of coronavirus.

She told MSPs the country had been on track to record 3,000 new cases per day if action had not been taken.

She said: ‘That has not happened. Daily case numbers are almost a third of that.

‘Prevalence in Scotland is also lower than in other UK nations.

‘So we have made progress, but the overall level of infection remains higher than we need it to be. And the national picture is masking significant regional variation.’

Ms Sturgeon also revealed that the total number of deaths from Covid-19 in Scotland will pass 5,000 this week.