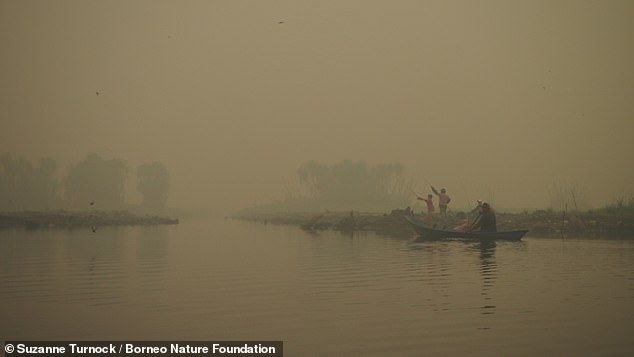 Protecting tropical peatlands, swamp-like areas in exotic parts of the world, could help prevent diseases jumping from animals to humans, a study claims.

Zoonotic diseases, including the coronavirus SARS-CoV-2 which causes Covid-19, are able to jump between species and thrive in more than one type of animal.

University of Exeter researchers found the high biodiversity in peatlands and habitat loss creates the perfect conditions for some pathogens to jump into people.

SARS-CoV-2 did not emerge in a tropical peatland, but other prominent epidemics, such as Ebola and HIV, originated in regions with lots of swampland.

Protecting tropical peatlands, swamp-like areas in exotic parts of the world, could help prevent diseases jumping from animals to humans, a study claims. Fires (pictured) are being used to clear the land for farming

Tropical peatlands are home to a large number of animal species, such as bats, rodents, pangolins and primates, which are known to act as stepping stones for emerging infectious disease (EIDs).

But they are also exploited for timber and other valuable products such as barks, resins and latex, with farmers regularly chopping down trees and burning land. 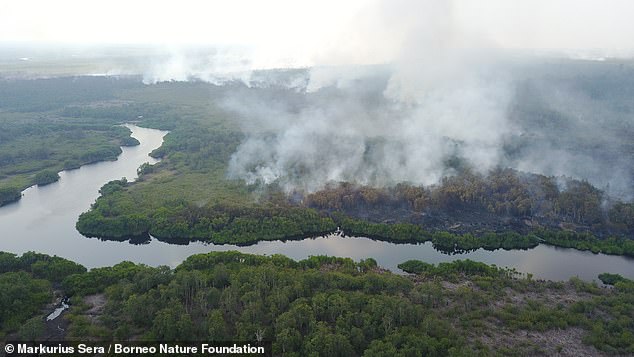 Pictured, a peatland fire in Indonesia spreads into forest. Researchers say protecting the swamps is crucial not only for conservation but for preventing future human pandemics

Dozens of domesticated animals at risk of coronavirus

Dozens of animals which regularly come into close contact with humans are susceptible to infection with the coronavirus, a study shows.

A total of 28 species were identified as being vulnerable to SARS-CoV-2, the same virus causing the Covid-19 pandemic in humans.

While it was already known dogs and cats are at risk of infection, the latest research also reveals so too are guinea pigs, rabbits and hamsters.

Outside of a domestic setting, researchers from the University College London (UCL) found animals in zoos (gorillas, polar bears and chimps) and on the farm (goats, donkeys and horses) can also be infected with the coronavirus.

The study found that most birds, fish, and reptiles do not appear to be at risk of infection, but the majority of the mammals could potentially be infected.

Lead author Dr Mark Harrison at the University of Exeter said: ‘We’re not saying tropical peatlands are unique in this respect.

‘But they are one important habitat where zoonotic diseases, those that jump from animals to humans, could emerge.

‘Exploitation and fragmentation of these habitats, as well as peat wildfires, ultimately driven by human activity, and wildlife harvesting bring more and more people into close contact with peatland biodiversity, increasing the potential for zoonotic disease transmission.’

Existing evidence was reviewed by researchers from countries with large tropical peatlands, including Indonesia, the Democratic Republic of Congo (DRC) and Peru.

The findings could explain why countries with large tropical peatlands have been so affected by COVID-19, the researchers say.

Co-author Dr Ifo Suspense from the Université Marien in the DRC said: ‘Many communities in these areas are remote, relatively poor, disconnected, have limited infrastructure, sub-standard or non-existent medical facilities, and depend heavily on external trade.

‘As a result, the direct and indirect impacts of COVID-19 may be particularly severe in these communities.’

The findings are published in the journal PeerJ.

ZOONOTIC DISEASES: THESE ARE VIRUSES USUALLY STARTED IN WILD ANIMALS THAT CAN PASS TO OTHER SPECIES AND SURVIVE

Zoonotic diseases are able to pass from one species to another.

The infecting agent – called a pathogen – in these diseases is able to cross the species border and still survive.

They range in potency, and are often less dangerous in one species than they are in another.

In order to be successful they rely on long and direct contact with different animals.

Common examples are the strains of influenza that have adapted to survive in humans from various different host animals.

H5N1, H7N9 and H5N6 are all strains of avian influenza which originated in birds and infected humans.

These cases are rare but outbreaks do occur when a person has prolonged, direct exposure with infected animals.

The flu strain is also incapable of passing from human to human once a person is infected.

A 2009 outbreak of swine flu – H1N1 – was considered a pandemic and governments spent millions developing ‘tamiflu’ to stop the spread of the disease.

Influenza is zoonotic because, as a virus, it can rapidly evolve and change its shape and structure.

There are examples of other zoonotic diseases, such as chlamydia.

Chlamydia is a bacteria that has many different strains in the general family.

This has been known to happen with some specific strains, Chlamydia abortus for example.

This specific bacteria can cause abortion in small ruminants, and if transmitted to a human can result in abortions, premature births and life-threatening illnesses in pregnant women.