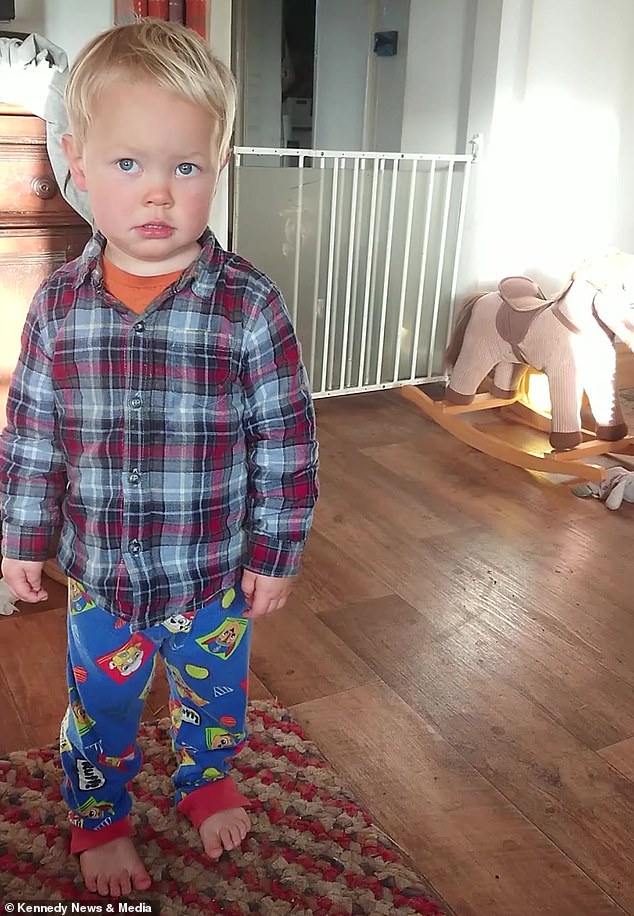 A toddler who has become a natural at breaking out of playpens and car seats has now been caught on camera using his rocking horse to escape from behind the bars of his baby gate.

Bill, who is just 20-months-old, had left his mother Helen Holbrock, 31, confused after repeatedly escaping from the family living room in Bath, Somerset.

Helen had blamed the escapes on her four-year-old son Arran who she believed had helped Bill in his breakout.

Bill Holbrock, 1, (pictured) was filmed executing a well-thought out escape plan at his home in Bath, Somerset

However, on November 2 Helen recorded footage of another escape attempt and realised that Bill was acting under his own steam and had made it into the kitchen by himself.

She watched in amazement as Bill moved his wooden rocking horse across the room before positioning the back rungs underneath the bottom of the gate.

In the footage recorded for Helen’s husband Ryan, 31, Bill climbs back onto the horse and rocks it forwards, using the leverage to life the baby gate out of its latch.

Giggling with pride, Bill then pushes the gate wide open to complete his escape. 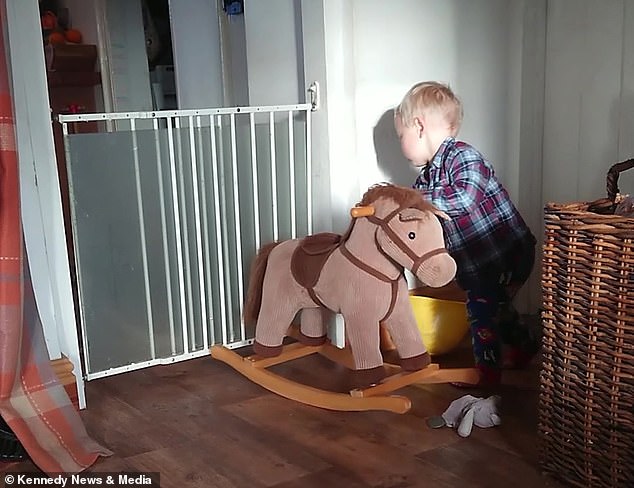 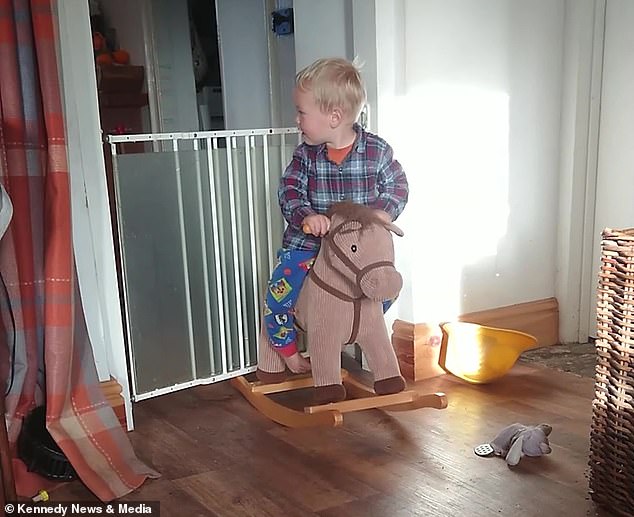 Although Helen will take Bill’s rocking horse away from him, she fears it will only be a matter of time before he devises another escape plan.

She said: ‘I was just astounded. I’d been trying to work out for weeks how he’d been getting out of the gate.

‘I just happened to spot Bill by chance moving his rocking horse and I couldn’t get over how intentionally he had placed the rungs underneath the gate.

‘He’d obviously thought long and hard about how to do it. I just couldn’t believe it. 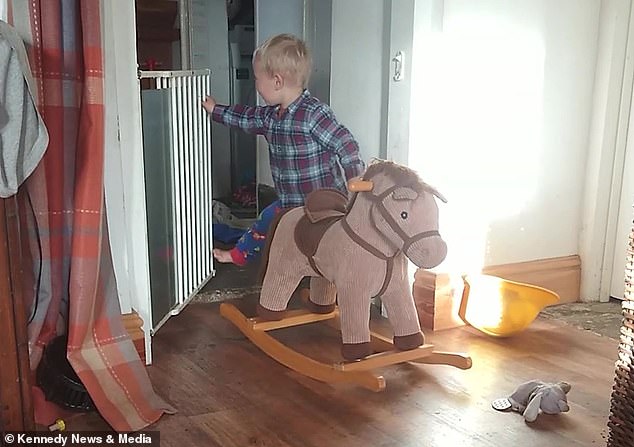 With a confident rock forwards he is able to generate the leverage required to lift the gate free of its fixings, allowing him to easily push it open 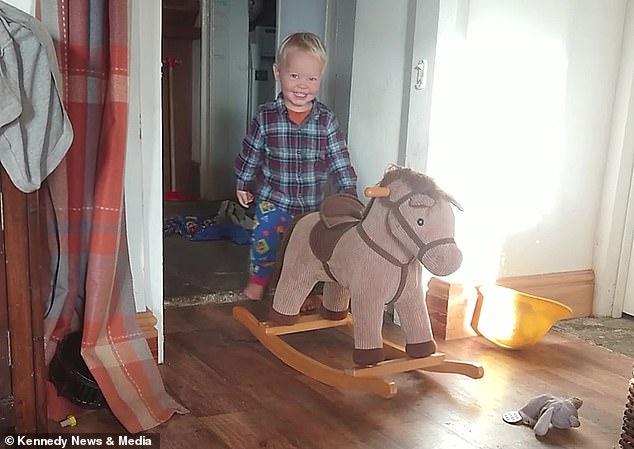 ‘The living room is the most baby proof room in the house so I’d felt comfortable leaving him for a minute to let the dogs out or grab something from upstairs.

‘Then I started finding him in the kitchen grabbing a piece of fruit or opening the fridge so I had to watch him like a hawk all the time.

‘He clearly knew he needed the leverage as the gate is quite stiff and he was just so purposeful with the way he set it up. I was gobsmacked that he had worked it out.

‘He knew he had to have it facing a certain way because I saw him try it later on and he had to move it around as the head was closer to the gate and he wouldn’t have had enough anchorage. 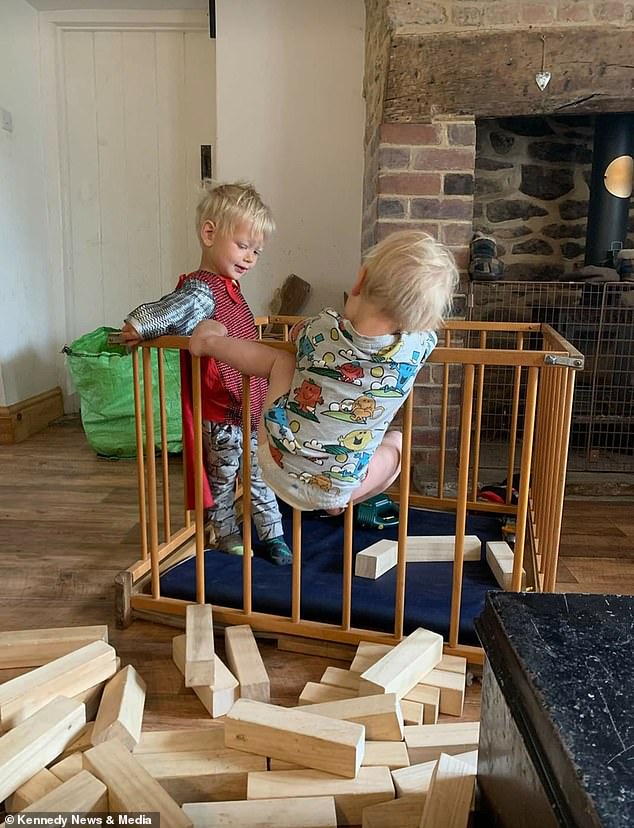 Helen said she wasn’t too surprised that her son had found a way to escape the living room because he had been trying to free himself from baby gates and car seats since he was born. Pictured: Bill (right) and brother Lochlan (left)

‘He’d obviously gone through a lot of trial and error and was well practiced. I knew I had to film it to show Ryan because I thought he wouldn’t believe me.’

Although stunned at the complexity of her young son’s escape method, Helen said she wasn’t surprised that he had found a way out.

She said: ‘He’s been an escapologist since he was born. Bill used to climb out of his playpen all the time when he was younger. He will not be denied his freedom.

‘We’ve had to find ways to keep him in his car seat too because he’s worked out how to squeeze out of that. 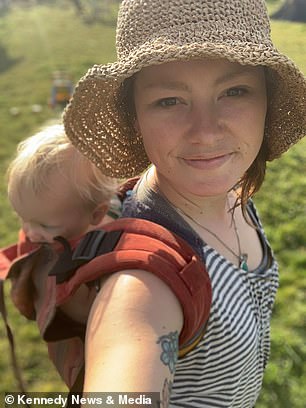 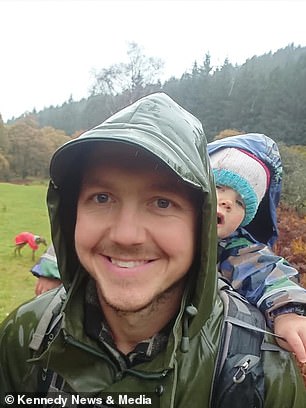 Helen (left) filmed the escape attempt so she could show her husband Ryan, 31, (right) 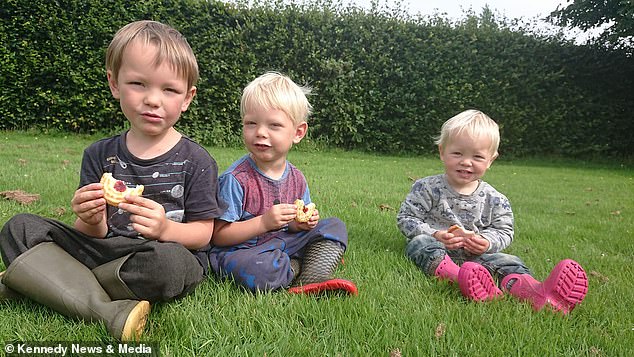 The Holbrock boys: Arran, 4, (left) who was accused of helping his brother of escaping, Lachlan, 3, (middle) and Bill, 1, (right)

‘We’ve put a dog collar around the top of his straps to keep them together. He is not keen on being restrained.

‘Ryan thought it was hilarious. It’s partly a relief knowing how he’s been getting out but it has made me think that I’ll need to up my game trying to keep him safe.’