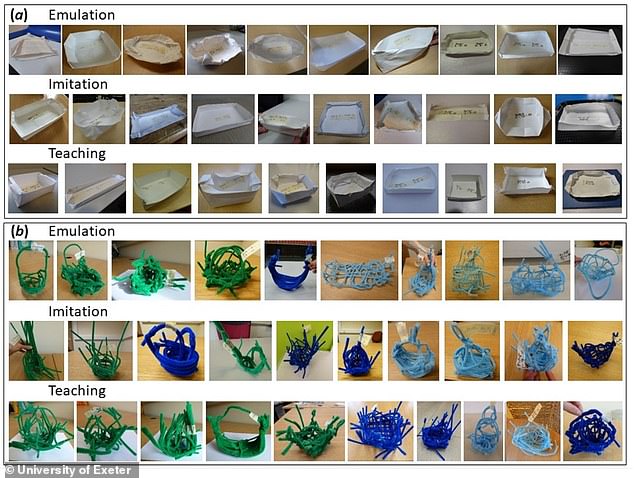 The ability of ancient humans to master tools coincided with their ability to teach others, a new study says.

UK researchers conducted experiments designed to replicate the evolution of human-made tools over several hundred years with pipe cleaners and bits of paper.

The experts found that participants who taught each other made the most rapid progress, compared with those who had to merely imitate others or learn by themselves.

The improvement of technologies and tools across generations, known as ‘cumulative cultural evolution’ (CCE), has been key to our success as a species.

But the origins of CCE, which have led to world-changing inventions such as the internet, aviation and human spaceflight, are difficult to trace.

Once humans invented teaching, we likely made the first steps towards humanity developing the incredible modern-day technologies we know today, researchers suggest.

What we now know as CCE was alluded to by English physicist Isaac Newton – a prominent figure of the scientific revolution of the 17th century – when he famously said: ‘If I have seen further it is by standing on the shoulders of giants.’

Cumulative cultural evolution (CCE) is the social-learning process through which adaptive modifications accumulate over historical time.

CCE involves sequential improvements in the performance of an innovation over successive rounds of cultural transmission.

It’s recognised as a powerful evolutionary force and has allowed technological inventions to exist.

CCE was alluded to by English physicist Isaac Newton – a prominent figure of the scientific revolution of the 17th century – when he famously said: ‘If I have seen further it is by standing on the shoulders of giants.’

Newton meant that he was able to build on generations of research by those that came before him to make his achievements – including discovering the the laws of gravity and motion – even possible.

This new study suggests that, as early humans developed more complex tools, natural selection began to favour those with the brains to be able to teach others.

‘Humans have an unrivalled ability to pass knowledge down the generations,’ said study author Dr Alex Thornton at the the University of Exeter.

‘Traditional theories assumed that CCE requires specialised processes, like teaching, to transmit information accurately, but this cannot explain why these processes evolved in the first place.

‘Our aim in this study was to test the hypothesis that these processes gradually co-evolved with an increasing reliance on complex tools.’

As part of the study, researchers recruited 600 people to form ‘transmission chain’ groups, each comprised of 10 individuals.

Both tools had to be judged on their ability to carry marbles and success was measured by the number of marbles each tool carried.

Each chain involved 10 ‘generations’, where 10 versions of the tools were created, with improvements made across each generation by each person in the chain.

Each chain was also given one of three social learning conditions to adhere to as they worked – ’emulation’, ‘imitation’ or ‘teaching’. 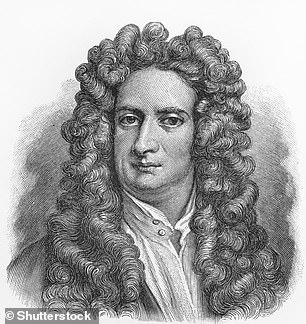 CCE was alluded to by Isaac Newton (pictured) when he famously said: ‘If I have seen further it is by standing on the shoulders of giants.’

In the teaching chains, meanwhile, each person spoke to the previous tool-maker in the group about how they attempted to make the tool.

In addition, researchers ran an ‘asocial learning’ condition for another 24 participants, who had to build 10 successive versions of the tools with no opportunity to learn from others.

Both the waterproof boat and the more complex pipe cleaner basket improved as new versions were made, the researchers found.

However, teaching only provided an advantage for the more complex tool – the pipe cleaner basket.

And while the simple waterproof boat tended to converge on a common design, the complex tools maintained a diversity of designs. 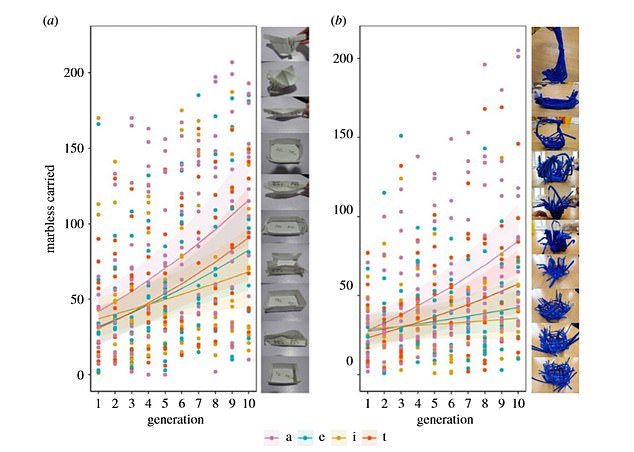 Slopes of improvement in (a) paper and (b) pipe-cleaner tools across conditions: a, asocial learning; e, emulation; i, imitation; t, teaching. Images show examples of transmission chains from generation one (top) to generation 10 (bottom) in the teaching condition

‘Simple and complex tools generally improved down the generations, and for simple tools this improvement was about the same in all three study conditions,’ said study author Dr Amanda Lucas at the University of Exeter.

‘With complex tools, teaching consistently led to more improvement compared to other conditions.

‘Teaching seemed to be particularly useful in allowing new, high-performing designs to be transmitted.’

Teaching provided ‘important advantages’ in the production of the complex tools – however, simply having the opportunity to inspect tools made by others was also enough to generate improvements over other ‘generations’, fulfilling the ‘core criteria for CCE’, the team said.

‘The effects we found were gradual – but the idea here was to look at the origins of cumulative cultural evolution, and over many generations these gradual improvements would add up,’ said Dr Thornton.

‘Our findings point to an evolutionary feedback loop between tool-making and teaching.

‘This suggests that our ancestors could have started to make modest cumulative improvements to simple tools without the need for teaching, but as tools became more complex, teaching started to become advantageous.

‘The evolution of improved teaching skills would in turn allow the production of even more complex and effective tools.’

The findings are published in the journal Proceedings of the Royal Society B.