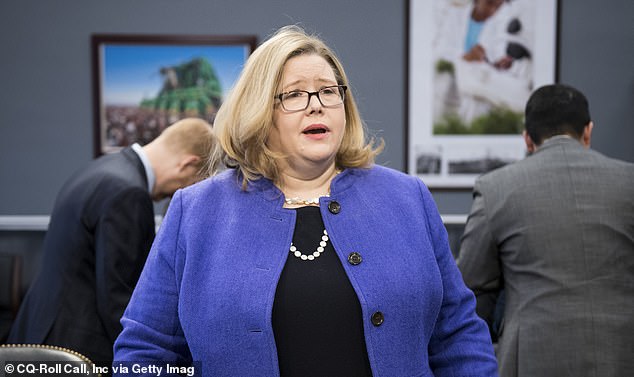 General Services Administration chief Emily Murphy is looking to the White House for cues to act when it comes to certifying the presidential election for Joe Biden instead of Donald Trump.

And she fears Trump will fire her if she crosses him, a senior administration official told The Washington Post.

President Trump ‘does not want a transition,’ the official said. ‘He’s made that very clear, and we are following orders.’

‘Absolutely not,’ she said during her press briefing. ‘GSA will make the determination of ascertainment at the right moment. There’s a constitutional process.’

Murphy is telling people she feels extreme pressure and has suggested ‘ascertainment’ could be weeks away.

‘She wants to see what happens with all of the states, and she is looking for cues from the White House,’ the official told The Post. ‘She doesn’t want to be disloyal to the administration that hired her.’ 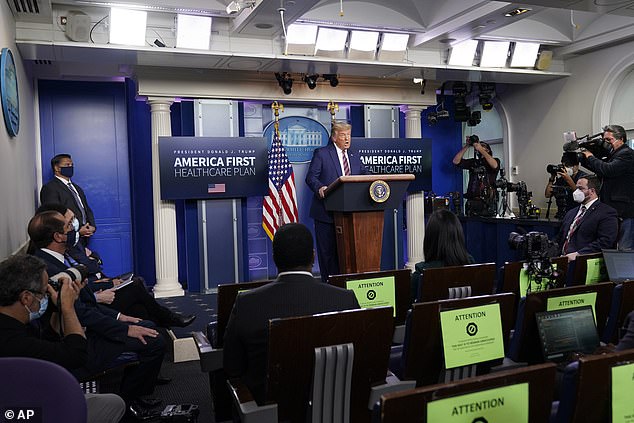 Murphy is said to be considering several options when it comes to ‘ascertainment’ – ones which would give her political cover.

Speaker Nancy Pelosi was asked at her weekly press conference on Friday if the House will have an expanded role if Trump continues to derail Biden transition.

‘Yes,’ Pelosi responded. ‘I’m not one to show my hand, but nonetheless, we’re ready.’

‘It is totally mystifying that the GSA refuses to make the statement necessary from the transition to happen in an orderly fashion,’ she noted.

Two powerful House Democrats – House Oversight Committee Chairwoman Carolyn Maloney and House Appropriations Chairwoman Nita Lowey – wrote to Murphy on Thursday night to demand an in-person briefing on the situation and warned her answers will determine whether or not they will haul her to Capitol Hill for a public hearing.

‘We have been extremely patient, but we can wait no longer,’ Maloney and Lowey wrote. 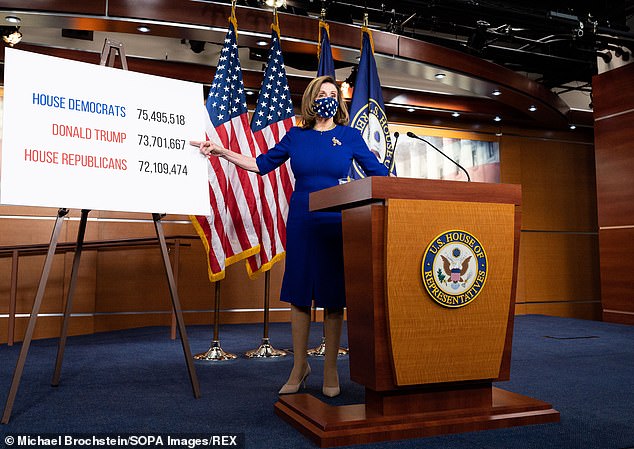 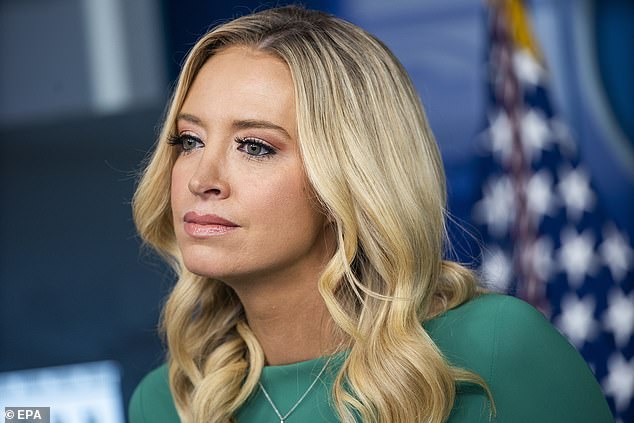 President Trump continues to call himself the winner of the 2020.

‘I won,’ he said Friday during an announcement about prescription drug prices at the White House.

He and his legal team are trying to overturn the election in the battleground states Biden won but most of their legal challenges have failed. Georgia, on Friday afternoon, certified its electoral votes for Biden, making him the first Democrat to carry the state since 1992.

Trump has offered praise to Murphy – for her work with veterans.

‘Great job Emily!’ he tweeted Sunday, retweeting a 10-day-old appeal from Murphy to disabled veterans to apply for federal contracts.

Murphy’s friends and allies told CNN she never thought she would be in such a situation and that she has been receiving death threats.

They also argued she is not a hard-line Trumper but is loyal to the Republican Party.

‘She absolutely feels like she’s in a hard place. She’s afraid on multiple levels. It’s a terrible situation,’ one friend and former colleague of Murphy’s told CNN. ‘Emily is a consummate professional, a deeply moral person, but also a very scrupulous attorney who is in a very difficult position with an unclear law and precedence that is behind her stance.

They described her as a policy wonk and said, despite her being a political appointee, she was not an avid Trump supporter or loyalist.

‘She’s going to be really thoughtful about both the letter of the law, any guidelines, explicit guidance, any precedence, as well as the overall intent. She comes out of contracts, where that is the whole nature of the work,’ a former colleague said. 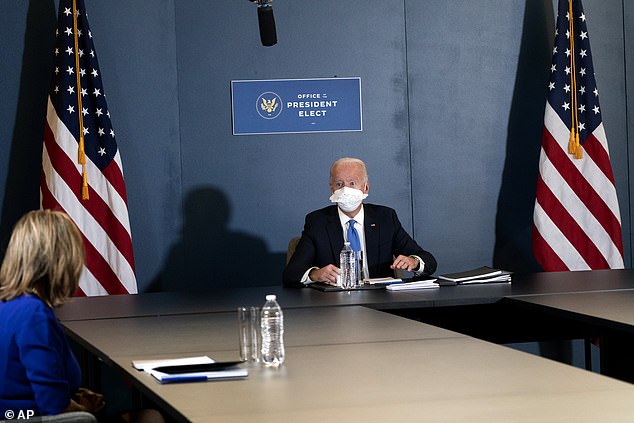 Meanwhile, Biden said Monday the delayed transition process is slowing down his ‘war’ on COVID.

Biden, in a virtual briefing with frontline healthcare workers, said that is hampering his ability to fight the pandemic, which has killed more than 250,000 Americans.

‘This is like going to war,’ he said of combating the coronavirus.

‘I am optimistic, but we should be further along’ in the transition process, he noted.

The president-elect specifically called out the GSA for not allowing the formal transition process to begin – part of a public pressure campaign he and his team are waging on Murphy to sign off on the process.

‘One of the problems that we’re having now is the failure of the administration to recognize – the law says that the General Services Administration has a person who recognizes who the winner is,’ Biden said, referring to Murphy’s power to set the wheels of change in motion.

‘That’s the only slow down right now that we have. We put together, I think, a first-rate team that you would all be proud of. And we’re all ready to go and doing an awful lot of work right now,’ he said.

But, Biden said, the delay means ‘we’ve been unable to get access to the kinds of things we need to know about’ including stockpile details. 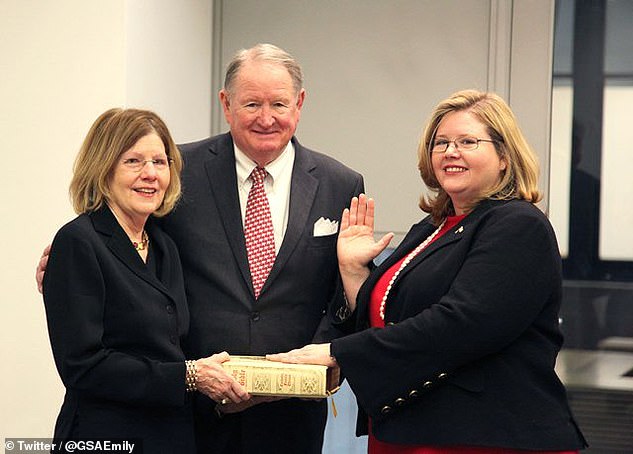 Emily Murphy being sworn in as GSA administrator in December 2017

Murphy, who went to law school at the University of Virginia and worked for years as a Republican staffer on Capitol Hill and in the executive branch, leads one of the most obscure yet powerful federal agencies.

‘I am not here to garner headlines or make a name for myself,’ Murphy said at her Senate confirmation hearing in October 2017. ‘My goal is to do my part in making the federal government more efficient, effective and responsive to the American people.’

She became GSA chief in December 2017 after the Senate confirmed her, taking the lead in the 12,000-person agency that manages the government’s real estate and its shopping list: the GSA runs all federal buildings and procures supplies for the executive branch.

Its task range from cleaning the West Wing of the White House to managing the federal government’s 215,000 vehicle motor pool to negotiating multi-million dollar contracts.