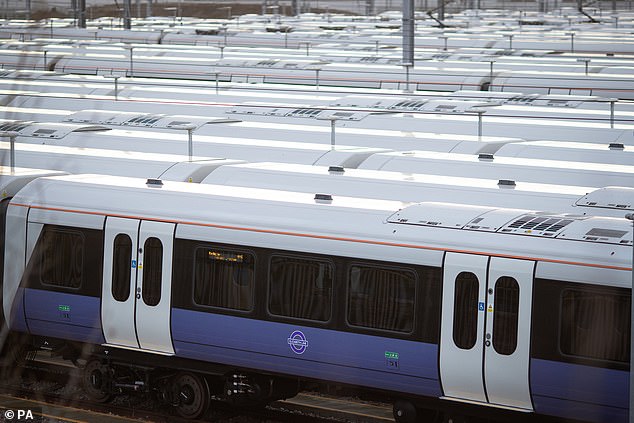 The beleaguered Crossrail project reportedly risks being ‘mothballed’ if further financial support is not provided soon by the Government, transport bosses have said.

According to Sky News, Transport for London (TfL) boss Andy Byford has written to the Department for Transport (DfT) warning that an agreement was needed to avoid a ‘Doomsday scenario’.

The troubled line, from Berkshire to Essex via central London, was originally expected to open in December 2018 but repeated delays have pushed it back.

The troubled line, from Berkshire to Essex via London, was originally expected to open in December 2018 but repeated delays have pushed it back (pictured, new Elizabeth Line at Woolwich station, London)

An update from Crossrail Ltd at the end of August said the opening of the railway, which will be called the Elizabeth Line, was now not expected until the first half of 2022.

In the letter, Mr Byford said: ‘If agreement is not reached this week, we will have no option but to mothball the project and to seek alternative governance for its eventual completion.

‘I sincerely hope that we can avoid such a Doomsday scenario.’

Mayor of London Sadiq Khan strongly advocated the suspension of construction projects, including Crossrail, during the first national lockdown in April to stop the spread of coronavirus.

A Government spokesperson said: ‘The Government remains committed to the efficient completion of the project, in a way that is fair to UK taxpayers, and that ensures London – as the primary beneficiary of Crossrail – bears the additional costs.

‘We are working with the Greater London Authority and Transport for London to develop a funding solution to see Crossrail’s completion.

‘It is unfortunate, in contrast to other construction projects, the Mayor chose to unnecessarily halt work on Crossrail during the pandemic.’

Following the speculation over further delays, the National Union of Rail, Maritime and Transport Workers (RMT) has demanded that Government stop using TfL and its workers as a ‘political football’.

RMT general secretary Mick Cash said: ‘What’s happening between the Government and TfL is nothing short of a disgrace.

‘As we approach next year’s London Mayoral Election it’s clear the Government are using TfL and our members as a political football.

‘Rather than stick to their pledge of ‘Building Back Better’, they’re starving TfL of vital funds and playing games with workers’ livelihoods.

‘London transport and its workforce are vital to the economic recovery from Covid-19 and RMT will not be afraid to do whatever is necessary to protect our members’ jobs and livelihoods.’

A spokesperson for TfL said: ‘TfL, the GLA and Government all continue to have discussions around the additional funding needed to complete the Crossrail project.’