For some time now, the exclamation mark has been going out of fashion. Perhaps we are all more wary and less excitable than once we were. So it’s good to see Cliff Richard refusing to stint on the exclamation marks in this, his most recent volume of autobiography.

You can measure out his life in exclamation marks. There are at least two or three on every page. Aged 17, he meets a man in a pub who says: ‘I can make you a star!’ When he plays the Gaumont Theatre in Shepherd’s Bush, girls scream at him.

‘I was absolutely thrilled. A very, very major part of my dream was coming true!’ For the next few days he has only one topic of conversation: ‘I’ve been screamed at! People screamed at me!’ 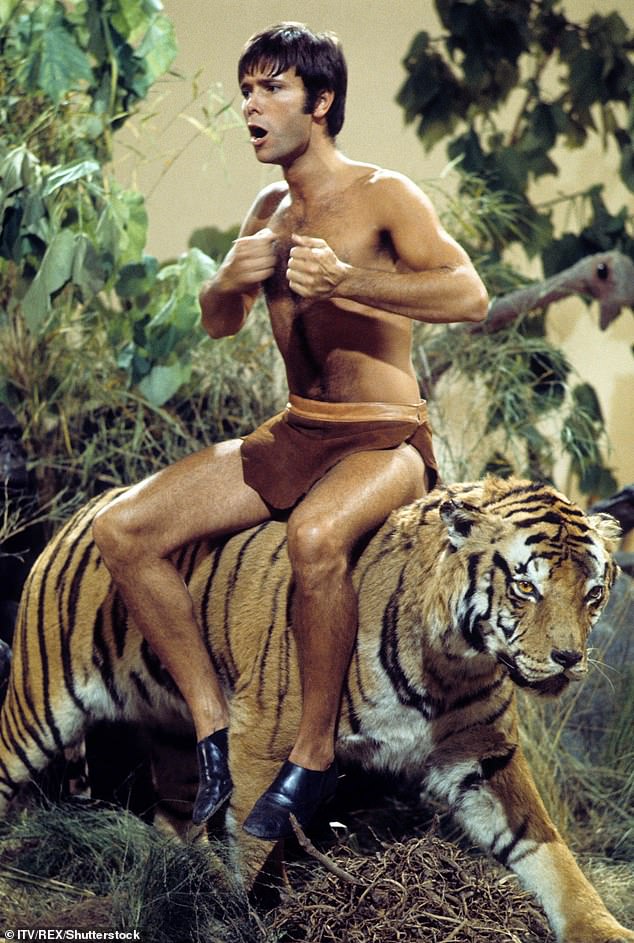 Cliff goes into the studio for the first time. ‘WOW! We had a record deal, and we were making a single!’

The headline in Disc magazine reads: ‘THIS BOY IS REALLY TERRIFIC!’ His first single, Move It, goes into the Top 20 at number 12, or, as he puts it: ‘Number 12!’

He goes on the TV show Oh, Boy! and becomes famous. ‘I was a star! What a dream!’ With fame comes responsibility. ‘And everybody… everybody!… wanted autographs.’ At this point, a footnote at the bottom of the page tells us that Cliff has now written so many autographs in his life that he can do them with his eyes closed, ‘but at least I do them all myself and don’t have someone forging them for me, as I hear some artists do!’

This was in 1958, which means that Cliff has been famous in the UK for a remarkable 62 years, a figure exceeded only by the Queen and Prince Philip and Sooty and Sweep.

He was born in India – ‘a fact that everybody knows about me’. His grandfather had gone out there as an engineer at the height of the Raj. Cliff’s dad was an area catering manager for Indian railway restaurants. 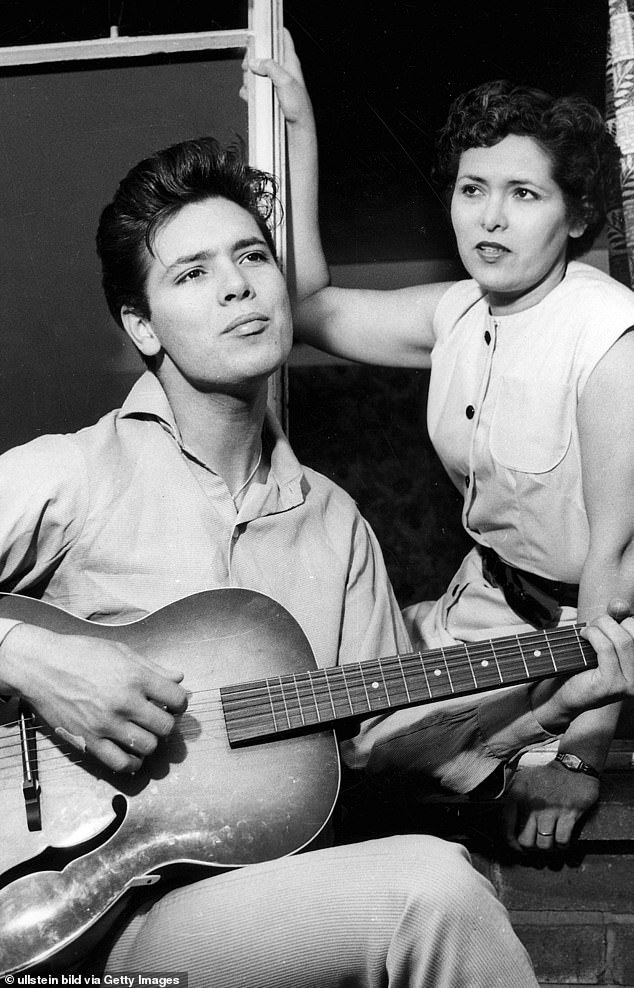 Cliff (above, aged 20, with his mother Dorothy in 1960) was born in India – ‘a fact that everybody knows about me’. His grandfather had gone out there as an engineer

The family returned to England in 1948, when Cliff was seven. At school in Carshalton, the other boys laboured under the misapprehension that he was a ‘Red Indian’, and bullied him.

‘I’ve always had this public image of being a wet Goody Two-Shoes, but I was tough at school. I had to be. If the other boys went for me, I would get them on the floor and punch them until the blood flowed. In fact, I don’t remember ever losing a fight.’

His father was a disciplinarian. When Cliff was caned at school, and complained how much it hurt, his father caned him again. Cliff described this episode in his previous autobiography, My Life, My Way, published in 2008, though he told it slightly differently.

In the 2008 book, his father picked up a cane and whacked him once. In this book he grabs a wooden ruler and whacks him three times.

Playing Ratty in Toad Of Toad Hall, Cliff is made to sing. He finds he loves performing and the applause it brings. Adolescence strikes. Like John Lennon – five days his senior – he plasters his bedroom wall with photographs of a scantily clad Brigitte Bardot. 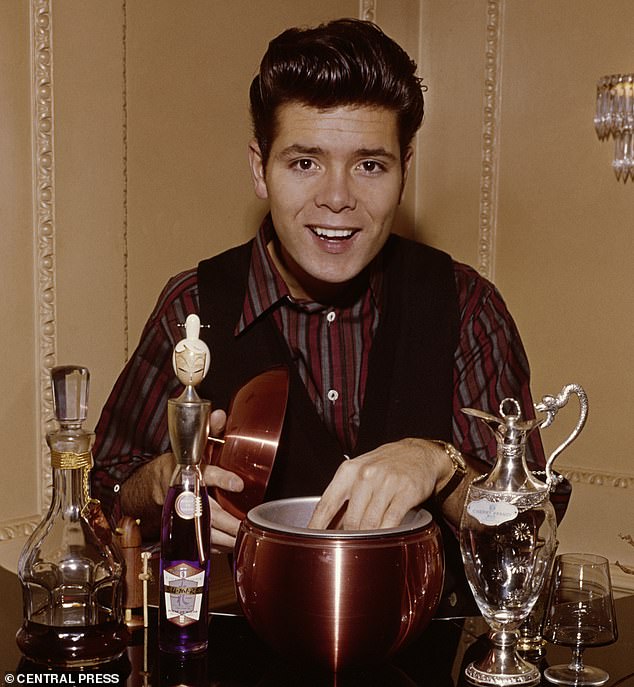 Playing Ratty in Toad Of Toad Hall, Cliff (above, at home in 1964) is made to sing. He finds he loves performing and the applause it brings. Adolescence strikes

Aged 15, he falls under the spell of Elvis Presley and buys his LP. ‘It was amazing!’ He attributes his obsession with Elvis to his failure to get more than one O-level. But he has already set his sights on being a star.

When the singer in a local skiffle group is called up for national service, Cliff steps in to replace him. With his friend Terry he forms a breakaway band, dedicated to playing rock and roll.

Thinking that his real name, Harry Webb, lacked glamour, he toyed with alternatives: Russ Clifford, Cliff Russard, and so on. Once again, seasoned Cliff theologians will wish to compare the slightly differing accounts in his past and present autobiographies.

In 2008 he remembered a friend suggesting ‘two Christian names, Cliff and Richard, which is unusual so people will remember it’. But in the new one, the same friend suggested that ‘Cliff Richard’ is good because ‘they are bound to call you “Cliff Richards” and you can correct them.

It means they will say your name twice and it will stick in people’s minds’.

Am I losing you? Anyway, though New Musical Express condemned his hip-swinging as ‘revolting, and not the sort of performance any parent would want their child to witness’, Cliff himself remains adamant that ‘I never tried to be suggestive’.

Instead, he was just imitating Elvis’s suggestive moves, which, he insists, is not the same thing. ‘I knew that I wasn’t a rebel… what I loved about early rock and roll was that it was fun… I simply wasn’t an angry rebel without a cause.

It wasn’t me and it has never been.’

Yet, in the past he has grown peevish when others have made the same point. For instance, in 1992 he told an interviewer for Q magazine ‘Oh, but I was a rebel, you see’, adding that, unlike The Beatles, ‘when it came to rebellion, we were far more the rebellious crowd.

Well, yes and no. For all his devotion to exclamation marks, Cliff can be surprisingly prickly. At every mention of The Beatles, for instance, he grows somewhat snarky, particularly at their success in America.

‘When the band flew into JFK airport at the start of ’64, Brian Epstein – it is rumoured – paid thousands of girls to scream at them.’ Later, he admits that he has always preferred the Bee Gees, ‘my all-time favourite band bar none’.

Congratulations! Cliff Richard is one of a few UK singers to have done the Eurovision Song Contest twice. He came second in 1968 and third in 1973.

Unlike The Beatles, Cliff has never cracked America. In his 2008 autobiography he admitted: ‘If I could make it in America, I would give up the pleasures of being anonymous there tomorrow.

It’s the one bugbear in my life that I have never been big in the fatherland of rock ’n’ roll.’ Twelve years on, he has changed his tune. ‘The strange thing is, now that I’m older, I’m kind of pleased that I never did break America.

It means it is the one place I’m still able to go and have something approaching a normal life.’

Though he has called this autobiography The Dreamer, he seems to have been anything but. Instead, he has devoted his life to his career. In the early days he had walk-outs with several young women, but ‘I was totally focused on my career’, so there is either ‘no question of any romance’, or he is obliged to call it off, for fear of jeopardising his ‘Bachelor Boy’ status with his fans.

After two-and-a-half years with a dancer called Jackie, he asks his manager what effect marriage would have on his career. His manager estimates he might lose ‘between ten and 25 per cent’ of his fans, so, with a flurry of exclamation marks – ‘Wow! I didn’t like that estimate at all!’ – he calls it off.

Throughout the book he seems markedly less interested in people than in chronicling record sales and chart positions. His impressions of other people are bland, to say the least.

The Queen is ‘as gracious as you would expect’ and Jerry Lee Lewis was ‘friendly’. The caddish actor Laurence Harvey was ‘a sweet guy’; the busty actress Jayne Mansfield ‘perfectly sweet’; Robert Morley ‘a real sweetheart’, and so on.

Even Elvis Presley’s bullish manager Colonel Parker was ‘a lovely man’. The only two characters to get the Cliff thumbs-down are Jimmy Savile, ‘a very weird man’, and Johnny Rotten, ‘certainly well-named when it came to his singing!’

Most of Cliff’s life was covered in his earlier autobiography, so there is little need for this new one. The only major event in his life since then was the appalling police raid on his home, and the subsequent investigation for crimes of which he was, quite clearly, wholly innocent.

When he says ‘my world collapsed’ you believe him, but though the pages dealing with his ordeal are gruelling, they are also strangely distant.

His gruesome ordeal might have made this autobiography less open and more snappy than its predecessor, particularly in regards to his sexuality. ‘It’s been well documented that I had an inappropriate relationship with Carol,’ he writes of a girlfriend from the late 1950s.

‘It’s not a topic that I want to revisit here: should people wish to read about it, they can do so elsewhere.’ All in all, The Dreamer might have been more aptly titled Trespassers Will Be Prosecuted.