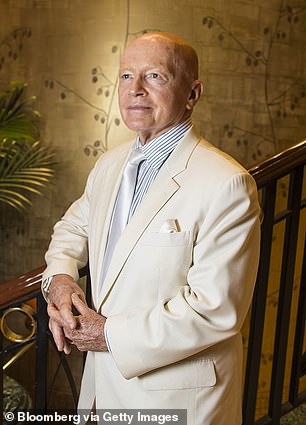 Veteran investor Mark Mobius has warned that the US stock market faces a sharp drop because of President-elect Joe Biden’s plans to hike taxes.

Mobius, one of the best-known investors globally, said that taxes could go up ‘radically’ under Biden for individuals and businesses.

‘If he’s able to get these tax changes through Congress, that would not be good for the US stock market, and you’ll probably see a correction,’ Mobius said.

The US market has had a tumultuous year. The S&P500 index of the largest American companies started the year at 3,258, before crashing to 2,237 in late March as Covid-19 gripped the West.

The index – which is led by technology giants including Apple, Microsoft, Amazon, and Facebook – has since rocketed to 3,558 even as the virus spread across the US.

Biden’s plans released before the election include raising taxes on people with income above $400,000, and increasing the corporate income tax rate. The plan would raise $3.3trillion over the next decade, according to the Tax Foundation think-tank.

‘If you see an American economy moving more towards a socialist structure, then the outlook is not that good,’ Mobius said.

Mobius was hired in 1987 by Sir John Templeton, an investor who died in 2008, to launch one of the first funds focusing on emerging market stocks.

A German citizen, he became known as Mr Emerging Markets and the trailblazer stayed with the US fund group Franklin Templeton until 2018 when he set up fund company Mobius Capital Partners.

He said the weakening of the US dollar means emerging economies now ‘look pretty good’ after a rocky ride over the past decade.

The MSCI Emerging Markets index was up 18 per cent last year – far less than the 29 per cent rise in the S&P500.

Mobius, 84, who has invested in emerging markets for more than four decades, said some emerging economies look more like a ‘safe haven’ for stashing money than the West.

‘So in that sense, if you’re looking for a place to put your money where you want to see growth, then these are the places you want to be in, it is sort of a safe haven.’

Mobius also believes tense relations between the US and China will thaw under Biden.

Relations between the world’s two biggest economies soured under Trump as they fought over trade tariffs and technology.

‘I would say the winners of this election were China and Iran, because Biden will be wearing a soft glove with China…the Trump rhetoric will be missing, and that means a lot,’ said Mobius.

‘And that will be sort of a step in the right direction.’