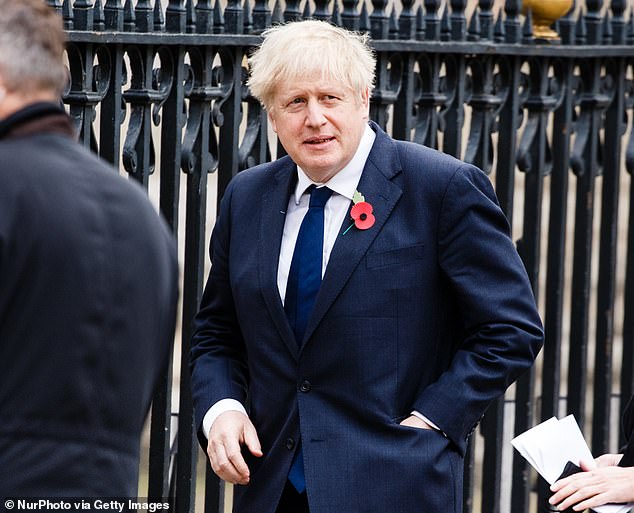 Boris Johnson’s election pledge to pay newly qualified teachers £30,000 is in doubt despite unions threatening industrial action and warning of an ‘exodus’ from the profession.

Rishi Sunak is preparing a ‘pay restraint’ across the public sector, despite the £6,000 pay rise being a key policy in the 2019 Tory manifesto.

Johnson had pledged to make teaching one of the ‘most competitive’ jobs for graduates but his plans are now looking uncertain.

The Chancellor is setting out his one-year spending review next week in which he is reportedly preparing to announce a wage freeze for millions of teachers, police, council staff, civil servants and other public servants.

He is hoping to plug the black hole in the public finances caused by the worldwide economic shutdown this year.

The Chancellor believes it would be ‘unfair’ for more than five million public sector workers to keep getting inflation-busting pay rises while many private sector counterparts face wage freezes or redundancy, Government sources said.

Public sector debt rose to more than £2trillion in October, with Government borrowing rising to £215billion in the first seven months of the financial year.

One head teachers’ union leader described the reports of a possible pay cap as a ‘huge kick in the teeth’ for school staff, adding that it was ‘an insult’ in light of the profession’s efforts during the coronavirus crisis.

Education unions have said it would be a ‘slap in the face’ for the profession if the Government imposes a cap on the pay of public sector workers. 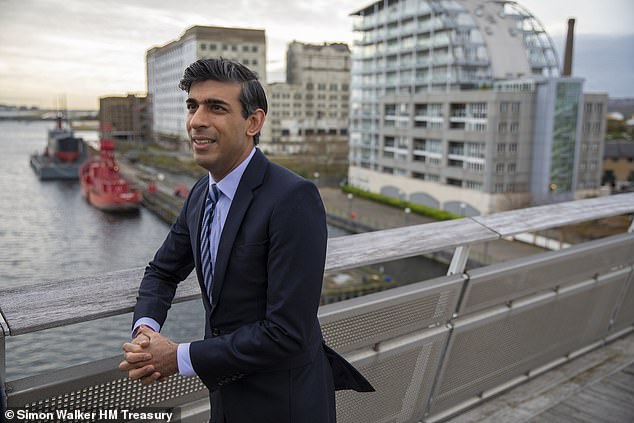 Rishi Sunak is preparing a ‘pay restraint’ across the public sector, despite the £6,000 pay rise being a key policy in the 2019 Tory manifesto

Geoff Barton, general secretary of the Association of School and College Leaders (ASCL), said: ‘For many experienced teachers and leaders the prospect of a pay freeze will be the final straw and we are extremely concerned that it will lead to an exodus from the profession.’

He added: ‘There is only so much that people can take. If the Government goes down the road of imposing a pay freeze on top of everything else, it is in danger of precipitating a crisis in which many teachers and leaders decide enough is enough.’

Meanwhile Mark Serwotka, general secretary of the Public and Commercial Services union, told The Telegraph that ‘industrial action cannot be ruled out.’

Paul Whiteman, general secretary of school leaders’ union NAHT, said the reports ‘will be seen as a huge kick in the teeth for millions of school staff.’

He added: ‘The civic response to Covid has been characterised by the willingness of public sector workers, school staff included, to go the extra mile. Public sector workers have been critical to the national effort. They have also endured personal losses and tragedies.

‘It is entirely wrong for the Government to expect dedicated public servants, some of them often on low rates of pay already, to be the ones to shoulder the responsibility of paying for the costs of Covid incurred by the Treasury. 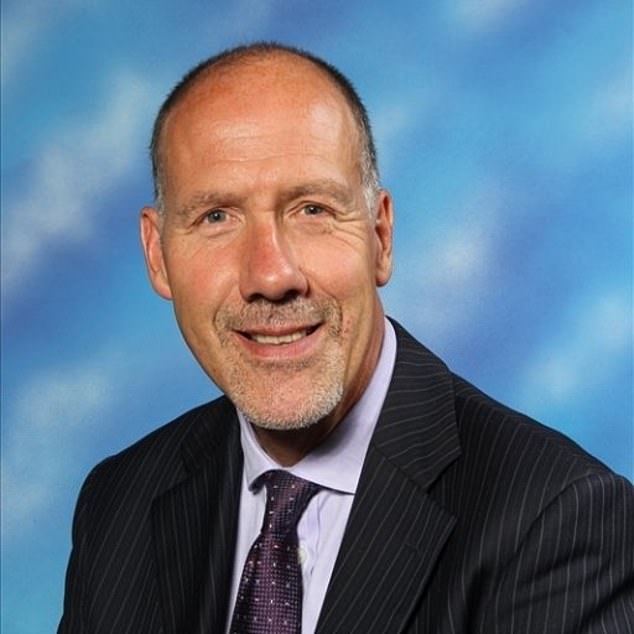 Geoff Barton, general secretary of the Association of School and College Leaders (ASCL), said there could be an ‘exodus from the profession’

‘Another slap in the face on pay, after years of pay freezes and an unbelievably challenging 2020 is an insult that many school staff will be absolutely stunned by.’

Public sector debt hit a new high of £2.08trillion at the end of October as the Government’s coronavirus borrowing surged to almost £215billion in just seven months.

Data published this morning by the Office for National Statistics (ONS) showed the UK’s overall debt has now reached 100.8 per cent of gross domestic product. 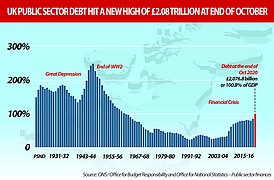 That is the highest it has been since the early 1960s when Britain was still wrestling with the economic fall out from the Second World War.

The numbers represent a major headache to Chancellor Rishi Sunak as he prepares to announce the Government’s spending review next week.  The coronavirus crisis has seen Government borrowing surge in every month since March, and October was no different.

Borrowing for the first seven months of the financial year has been estimated at some £214.9billion. That is the highest amount of borrowing ever recorded in any April to October period and almost £170billion more than in the same period last year.

Public sector net debt has increased by £276.3billion in the first seven months of the financial year, reaching £2.076trillion at the end of October.

Experts said it leaves the Chancellor facing a difficult balancing act ahead of the Spending Review on November 25, with the end of the post-Brexit transition period also looming at the end of the year and the UK and the EU yet to agree a trade deal.

‘As children and young people try to recover from the impact of the pandemic, they need more than ever the expertise of experienced and qualified teachers in the classroom.’

Kevin Courtney, joint general secretary of the National Education Union (NEU), said: ‘This isn’t about fairness at all. This is a con job. The Government will argue this is about holding down public sector pay because private sector pay has gone down, but it makes no sense economically.’

He added that a pay freeze would mean that ‘recruitment problems will be back with a vengeance’ after the pandemic.

Mr Courtney said: ‘If Rishi Sunak does end up saying to school staff that their pay will be held down, then it is entirely the wrong moment to say it. This is not levelling up, but levelling down.’

The Treasury said it did not comment on speculation, but said public sector pay restraint was mentioned by Mr Sunak in July when the spending review was launched.

A report by the Centre for Policy Studies think-tank suggests a three-year public sector pay freeze would save as much as £23billion.

Government sources said it would not affect settlements already awarded to nurses, doctors and other key workers this year.

But millions of public sector staff will face pay curbs in future years. The Unite union last night described the prospect of an effective pay freeze as an ‘insult’.

Annaliese Dodds, the shadow chancellor, said: ‘Workers on the front line have kept our country going through this pandemic. Thousands of them have lost their lives in the process.

‘Now – in the middle of a deadly second wave – the Chancellor wants to reward them with a pay freeze. Irresponsible. Unacceptable. Wrong.’

The head of the body representing rank-and-file police officers also hit out at the idea of pay restraint today.

John Apter, national chairman of the Police Federation of England and Wales, John Apter, said it would be ‘unforgiveable and a betrayal’ of officers.

‘Given the personal sacrifices made by public sector workers during this pandemic and following years of public sector pay freezes, such a move would be morally bankrupt. My colleagues deserve much more,’ he said.

‘During the pandemic, Government ministers have thanked and celebrated key workers in the public sector, even clapping on doorsteps to show their support. To freeze their pay and penalise these same workers would be complete hypocrisy.’

However, a Government source said the Chancellor believed it was vital to retain a sense of balance between the public and private sectors.

‘The Chancellor’s view is that there is an issue of fairness,’ the source said.

‘Many people in the private sector are facing pay freezes or worse and it is simply not fair to have settlements in the public sector that don’t reflect that.’

Treasury sources pointed to official figures showing that public sector wages rose by an average of 4.8 per cent year-on-year in May.

Those in the private sector fell by 2.6 per cent.

This year’s changes come on top of a public sector ‘earnings premium’, which the Office for National Statistics estimated last year at seven per cent.

Mr Sunak faces a monumental task in trying to stabilise public finances wrecked by the pandemic. 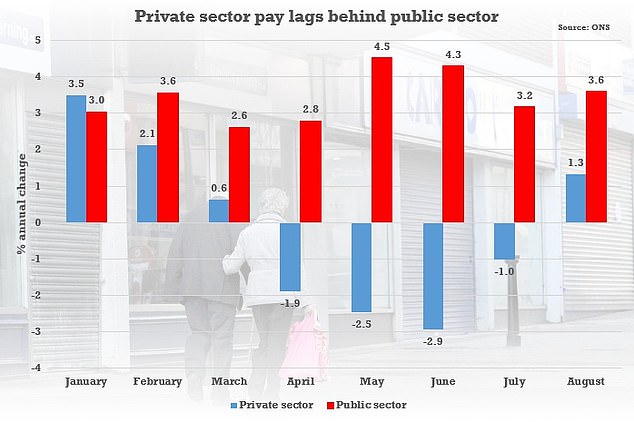 The Chancellor believes it would be ‘unfair’ for more than five million public sector workers to keep getting inflation-busting pay rises while many private sector counterparts face wage freezes or redundancy. Pictured: ONS data shows private sector pay is lagging behind that of the public sector 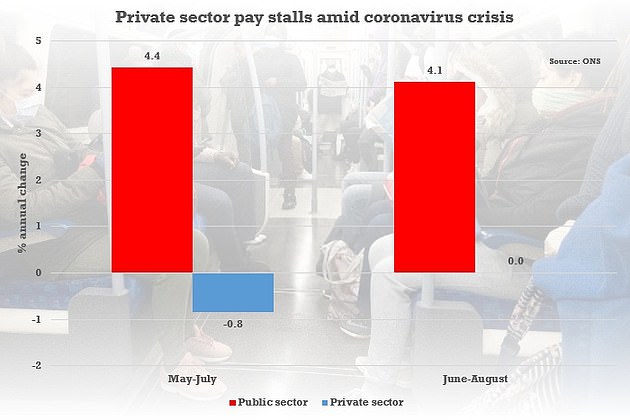 According to the ONS, regular pay in the public sector was 4.1 per cent higher in June to August than the same period last year, while the private sector flatlined

Sir Tom Scholar told MPs: ‘We’ll get the precise numbers next week but, in their monthly estimate in August, the [Office for Budget Responsibility] were projecting borrowing this year of something like £370billion, or 19 per cent of GDP.’

The Coalition government imposed pay restraint on the public sector in the wake of the financial crash.

It lasted for eight years and consisted of a two-year pay freeze followed by six years in which pay rises were capped at 1 per cent.

That ended two years ago. Doctors received a 2.8 per cent award this year, while teachers got 3.1 per cent and police and prison officers received 2.5 per cent. 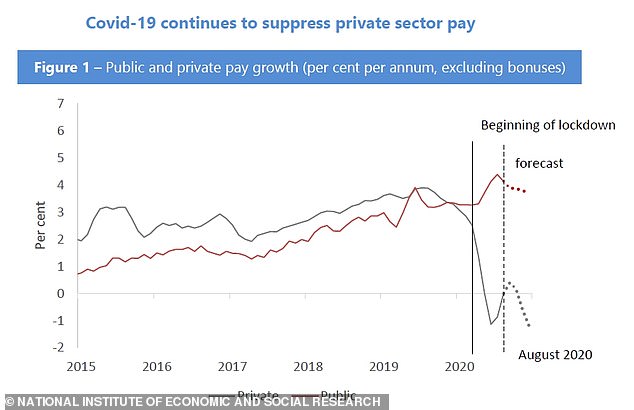 This graph from the National Institute of Economic and Social Research shows public and private pay growth (per cent per annum, excluding bonuses)

Nurses are already covered by a three-year pay deal worth 6.5 per cent, which ends next year. All the increases were well above the CPI inflation rate, which stood at 0.9 per cent last month.

Mr Sunak hinted at fresh pay curbs in a letter to Cabinet ministers in July. Launching the spending review, he said: ‘For reasons of fairness we must exercise restraint in future public sector pay awards, ensuring that… public sector pay retains parity with the private sector.’

The prospect of a pay freeze sparked an angry response from Unite last night. Assistant general secretary Gail Cartmail said: ‘In the spring, the Prime Minister was praising NHS staff for saving his life.

‘Now, in the autumn, he needs to ensure that his Chancellor turns those warm words into hard cash for those that ensure the efficient running of the NHS, schools and colleges, and the myriad services provided on a daily basis by local councils.’ 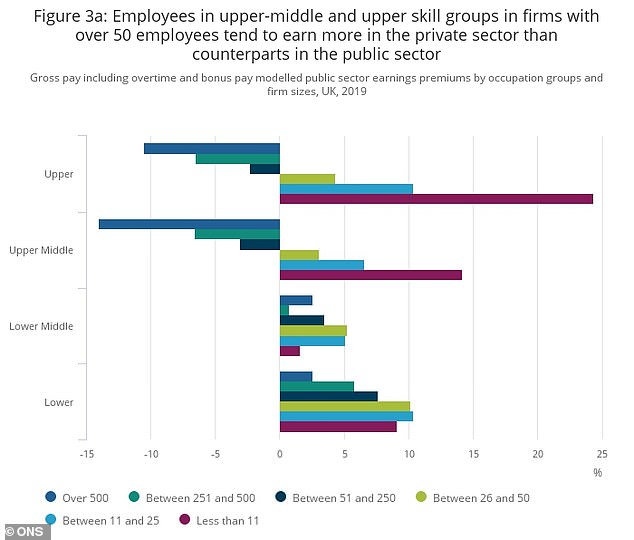 The graph above shows the percentage difference between public and private sector workers employed by companies/organisations of varying sizes. The greatest earnings difference was in the ‘upper-skilled’ occupations of the smallest firms – employing 10 or fewer staff – where public sector workers earned 24 percent more than their private counterparts.

The Centre for Policy Studies report, however, argues that a pay freeze would be justified.

The centre-Right think-tank warns that without action to curb pay, the Government will face a sharply rising public sector wage bill at a time of raised borrowing due to the pandemic.

It argues that private sector workers have suffered far more in the pandemic and that measures are needed to ensure the labour market is not unfairly weighted towards the public sector.

The report says a three-year freeze across the public sector would save £23billion. Even if the entire NHS was excluded, the move could save £15.3billion over three years.

Alternatively, it said that an annual 1 per cent pay rise cap would save £11.7billion over the period – or £7.7billion if it did not apply to healthcare workers.

The think-tank’s director, Robert Colvile, said: ‘The economic impact of the pandemic has been severe but the pain has not been shared equally.

‘Healthcare workers aside, it is difficult to justify generous pay rises in the public sector when private sector wages are actually falling.

At the same time, there is a need to control public spending and reduce the structural deficit which the pandemic is likely to have opened up.’

The Treasury declined to comment on the details of the new pay squeeze.