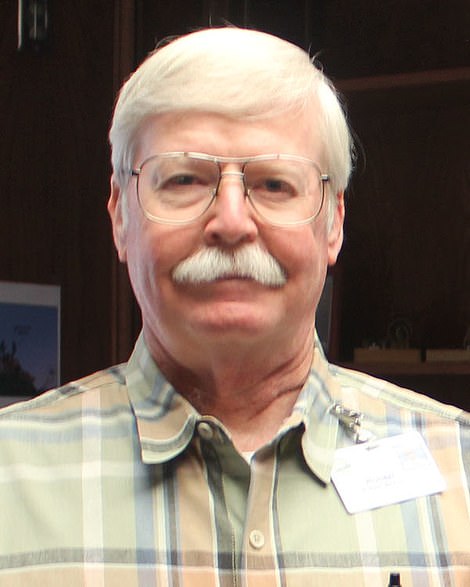 Robert Brady, the chief clerk of the Floyd County Board of Elections, was fired on Thursday after 2,600 uncounted ballots were discovered during a statewide audit

A Georgia county’s board of elections voted to fire its chief clerk on Thursday after 2,600 uncounted ballots were discovered just before the district initially certified the results.

Meanwhile, supporters of President Trump gathered on the steps of the State Capitol building in Atlanta and staged a ‘stop the steal’ rally for the third straight day.

The Floyd County board met for about an hour on Thursday in a special session that ended with a vote to terminate Brady, according to Fox 5 Atlanta.

Brady was fired after receiving at least two reprimands in the past six months.

‘It really is a matter of human error not of some big fraud or conspiracy and people make mistakes, but unfortunately I think this one falls at the feet of our elections director who I’ve been critical of this entire elections cycle,’ Wendy Davis, the Rome City Commissioner, told Fox 5.

During a statewide audit earlier this week, election officials found some 2,600 ballots that were not counted in the earlier totals.

Election officials discovered that they failed to upload a memory card containing electronic counts of those votes on Election Day, according to the Athens Banner-Herald.

As a result of the discovery, election officials had to rescan more than 8,000 ballots to make sure there were no other discrepancies.

‘There weren’t the right double and triple checks right before certification to realize we hadn’t counted as many numbers as the people that early voted,’ Davis said.

President Trump lost Georgia to Biden by some 12,670 votes, so the undiscovered ballots in Floyd County would not have affected the final outcome. 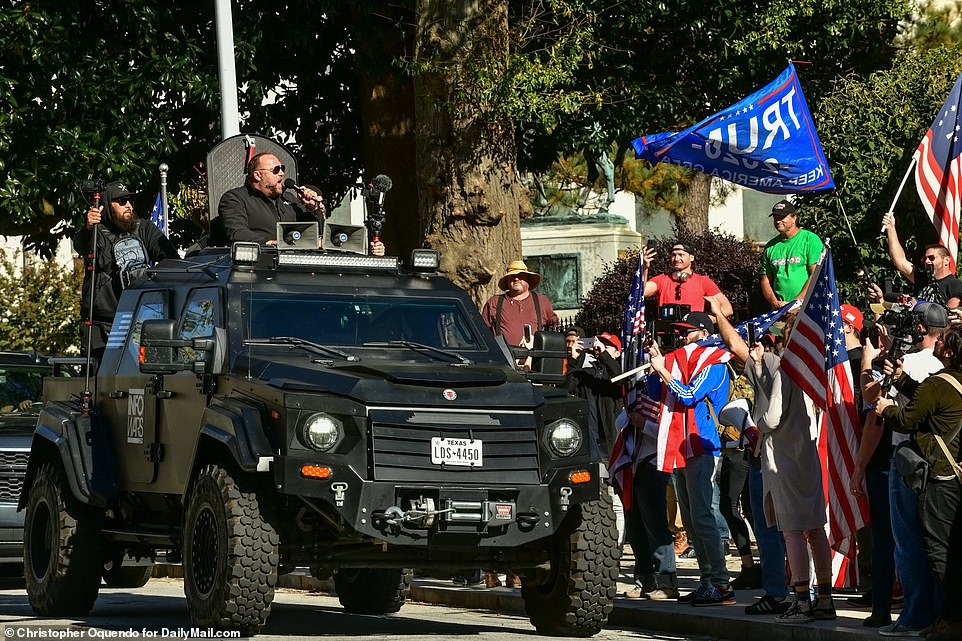 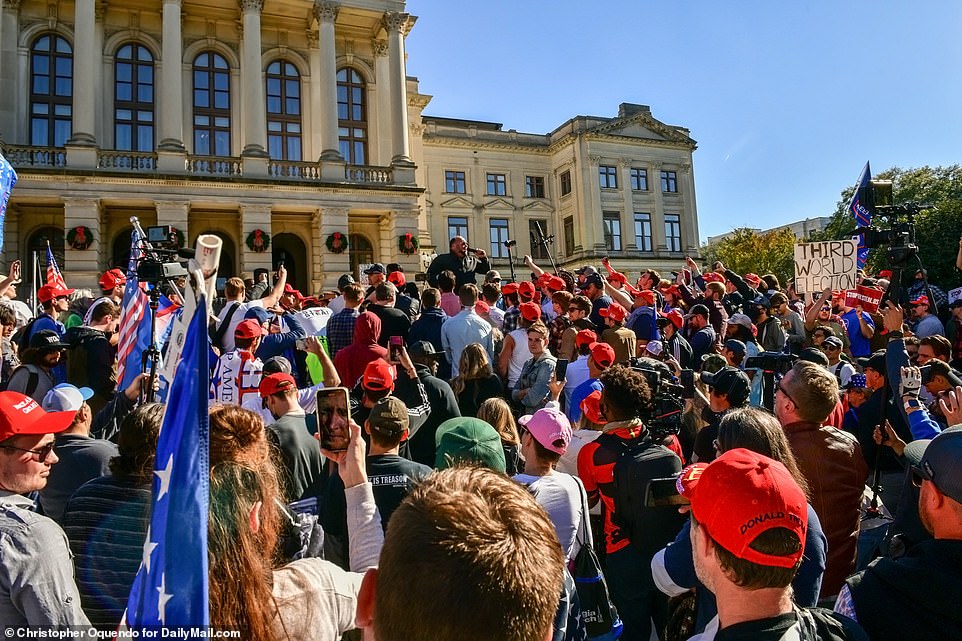 Alex Jones, the conspiracy theorist and internet media personality, is seen speaking to Trump supporters on the steps of the State Capitol in Atlanta for the third day in a row during a ‘stop the steal’ rally on Friday 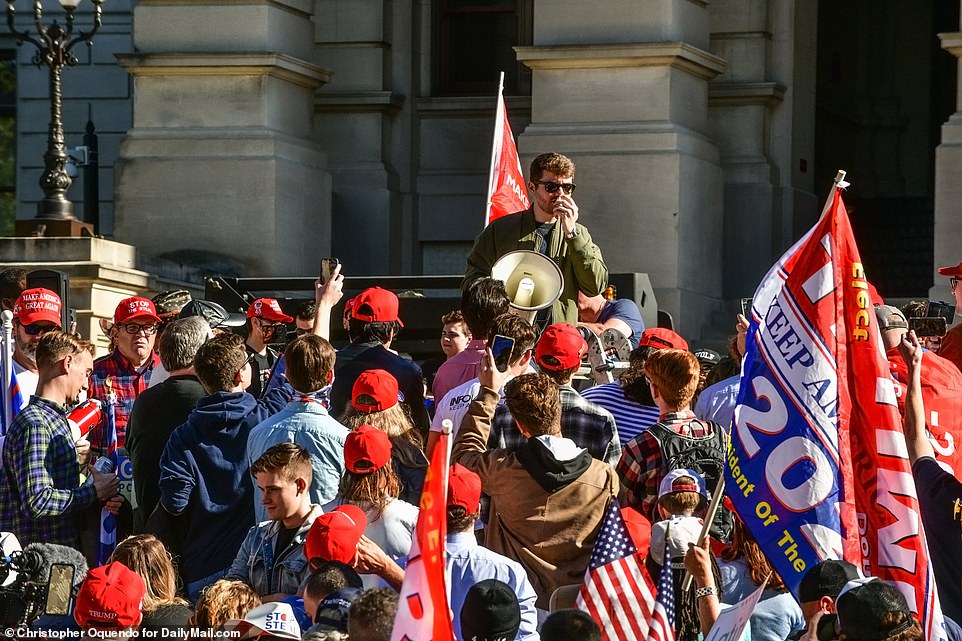 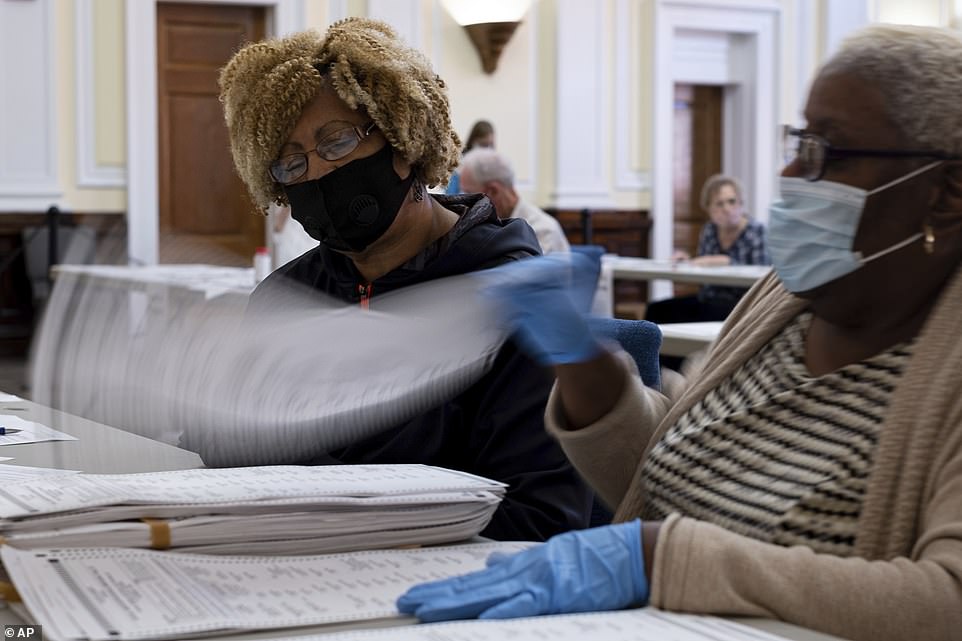 President Trump lost Georgia to President-elect Joe Biden by some 12,670 votes, so the undiscovered ballots in Floyd County would not have affected the final outcome. The above image shows officials sorting ballots during an audit at the Floyd County administration building in Rome, Georgia, on November 13 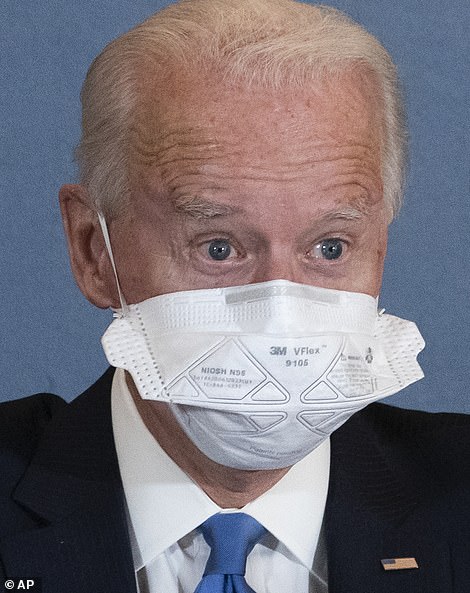 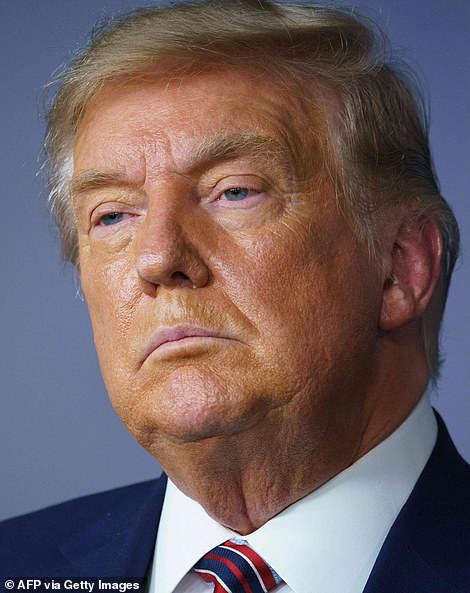 Of the 2,600 discovered ballots in Republican-leaning Floyd County, most of them went for Trump (right). The new batch of ballots slashed Biden’s (left) lead over Trump by some 800 votes – still not enough to overcome the Democrat’s advantage 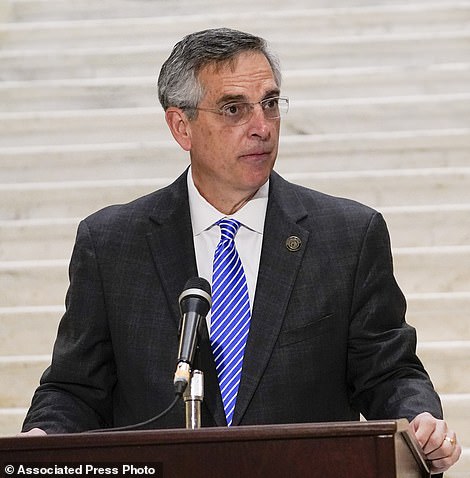 Of the 2,600 discovered ballots in Republican-leaning Floyd County, most of them went for Trump.

The new batch of ballots slashed Biden’s lead over Trump by some 800 votes – still not enough to overcome the Democrat’s advantage.

Trump and his supporters have alleged that widespread voter fraud cost him the election and that he is the real winner.

But his lawyers have been unable to prove the claims in court.

Democrats and Republicans agreed that Brady should have been fired and that the uncounted ballots were a result of human error rather than a deliberate attempt to sabotage a free and fair election.

Meanwhile, Georgia’s top elections official said on Friday that he will certify that Biden won the state’s presidential election after a hand tally stemming from a mandatory audit affirmed the Democrat’s lead over Trump. 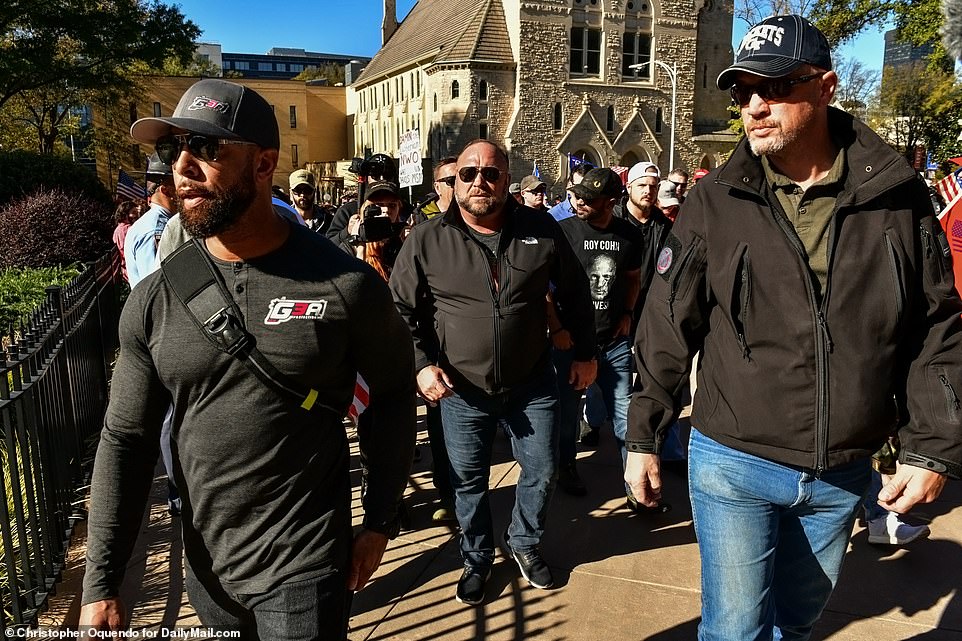 Jones is seen above (center) arriving at the State Capitol on Friday. Some of the Trump supporters were seen carrying long rifles 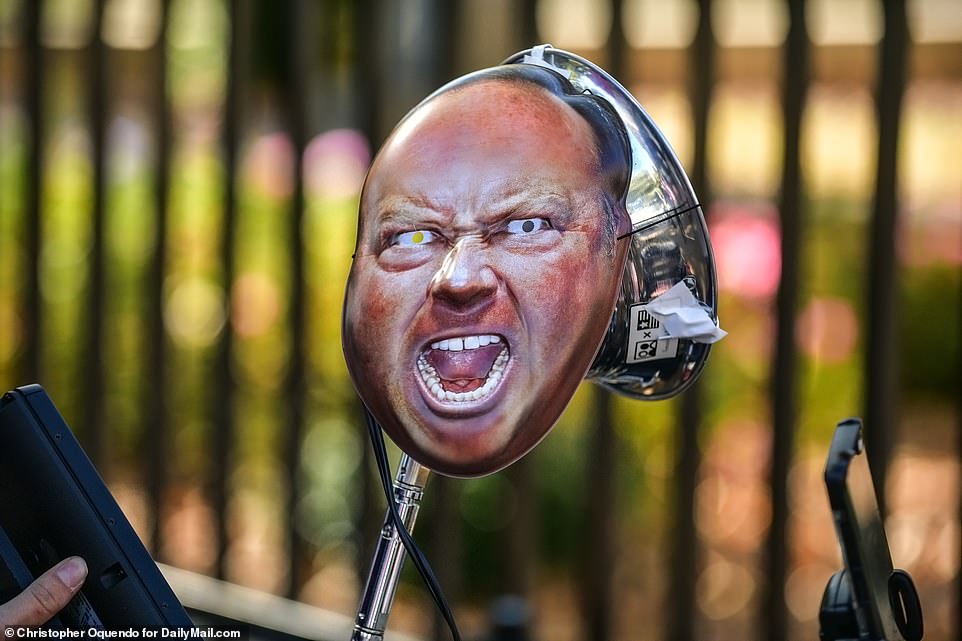 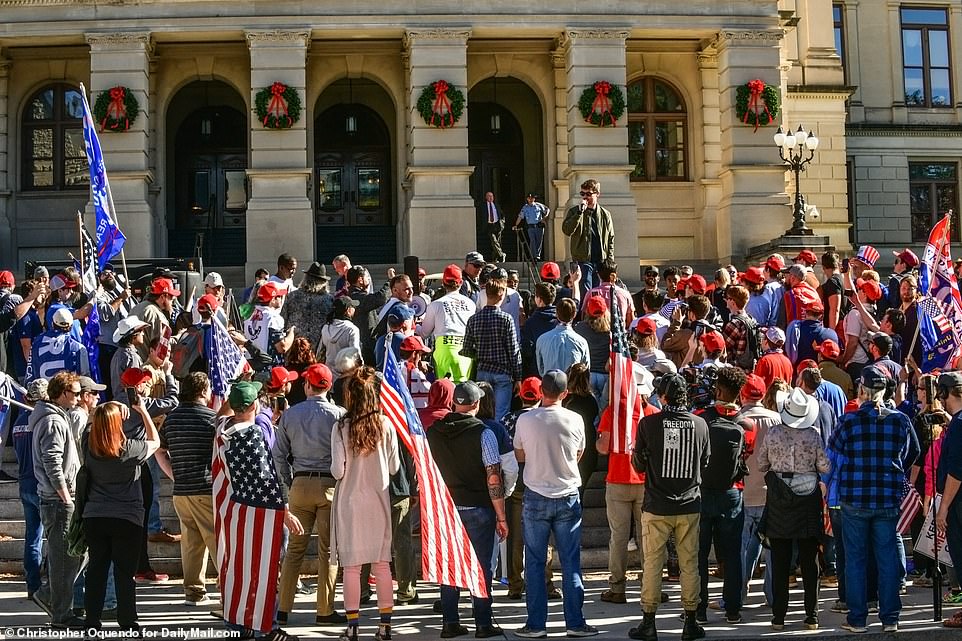 Another conspiracy theorist, Nick Fuentes, is seen above addressing the crowd of Trump supporters in Atlanta on Friday 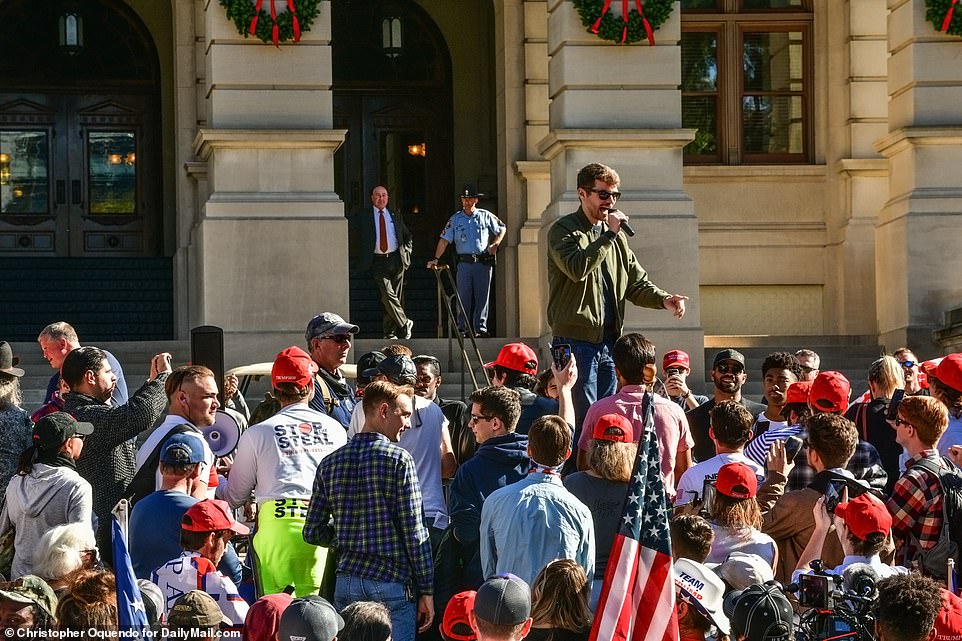 Trump supporters waved banners and flags rally for the third day in a row as they held a ‘stop the steal’ protest outside the State Capitol in Atlanta, Georgia, on Friday 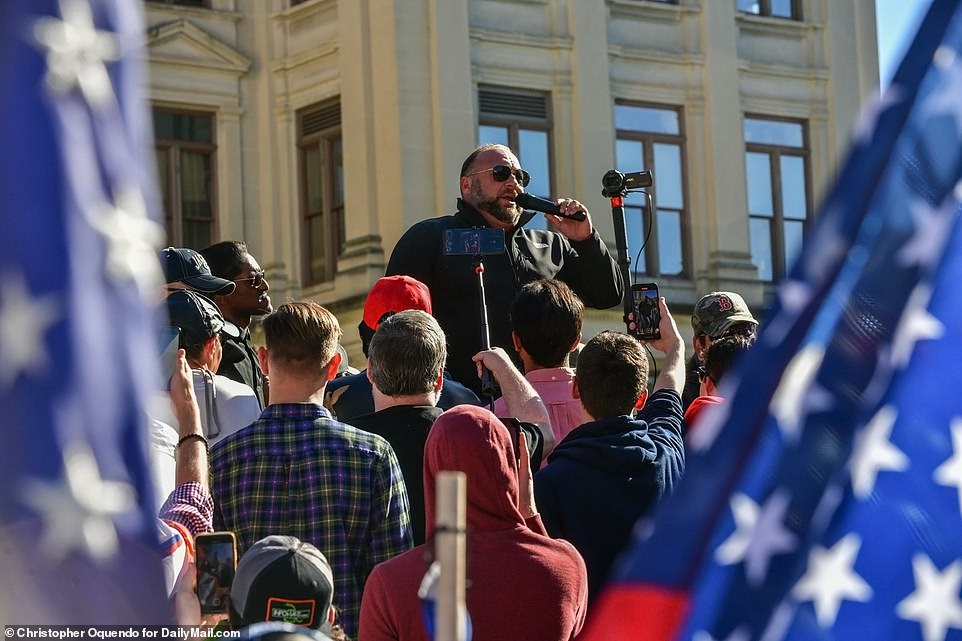 ‘I believe that the numbers that we have presented today are correct. The numbers reflect the will of the people,’ Georgia Secretary of State Brad Raffensperger, a Republican, said.

The hand count showed Biden won by more than 12,000 votes out of about 5 million cast, according to data released by Raffensperger’s office Thursday.

‘Working as an engineer throughout my life, I live by the motto that numbers don’t lie,’ Raffensperger said during a news conference at the state Capitol.

State law requires Raffensperger to certify the election results by 5pm on Friday. Then, Governor Brian Kemp has until 5 pm on Saturday to certify the state’s slate of 16 presidential electors.

Kemp announced a news conference for Friday at 5pm.

The Republican governor hasn’t stepped forward to defend the integrity of this year’s elections amid attacks by Trump and other members of his own party, who claim without evidence that the presidential vote in Georgia was tainted by fraud.

Kemp has neither endorsed Trump’s fraud claims nor backed Raffensperger in his assertion that the election was conducted fairly.

CNN reported Kemp will certify the results at his press conference. 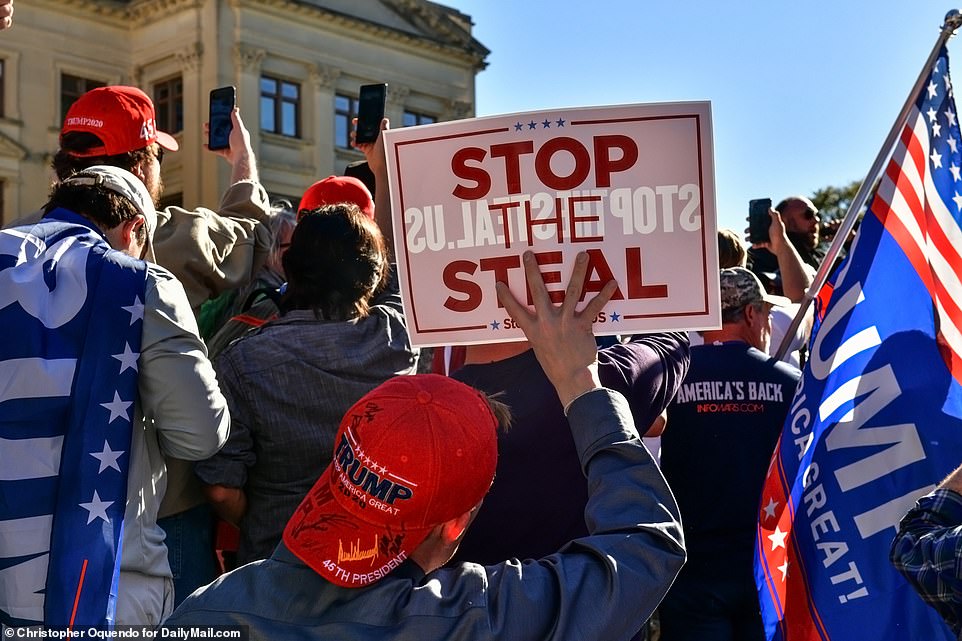 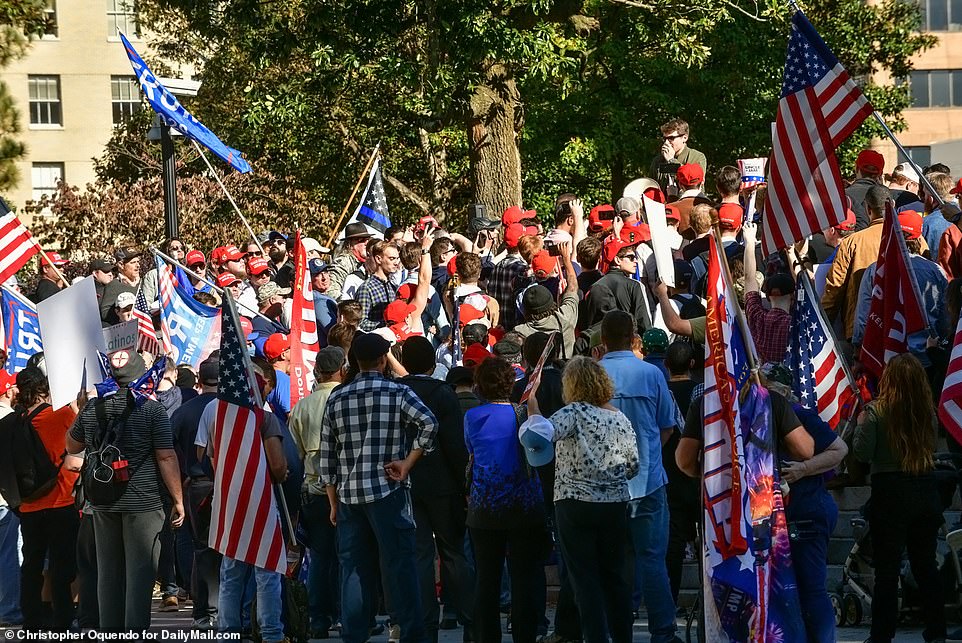 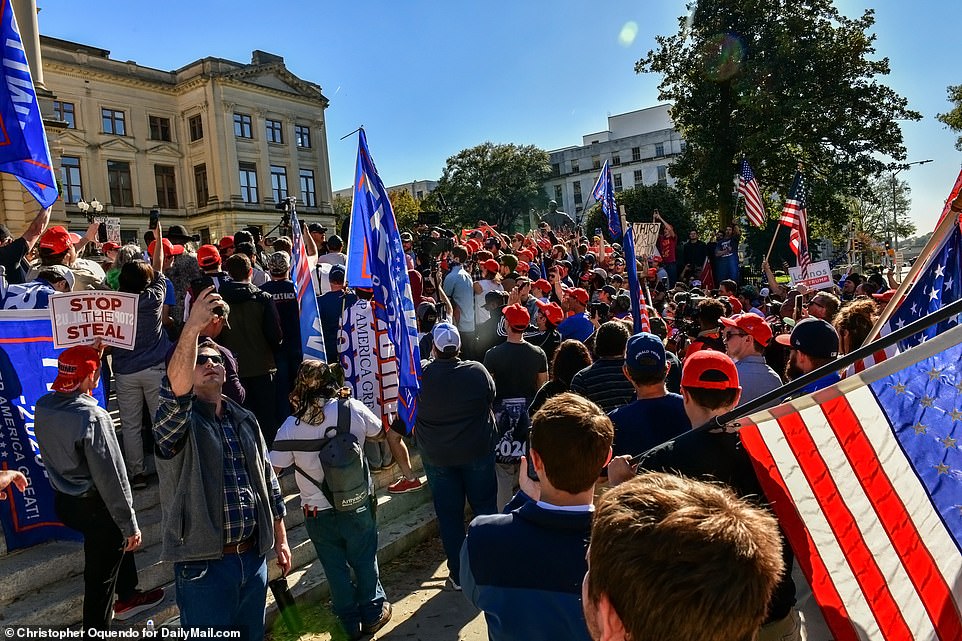 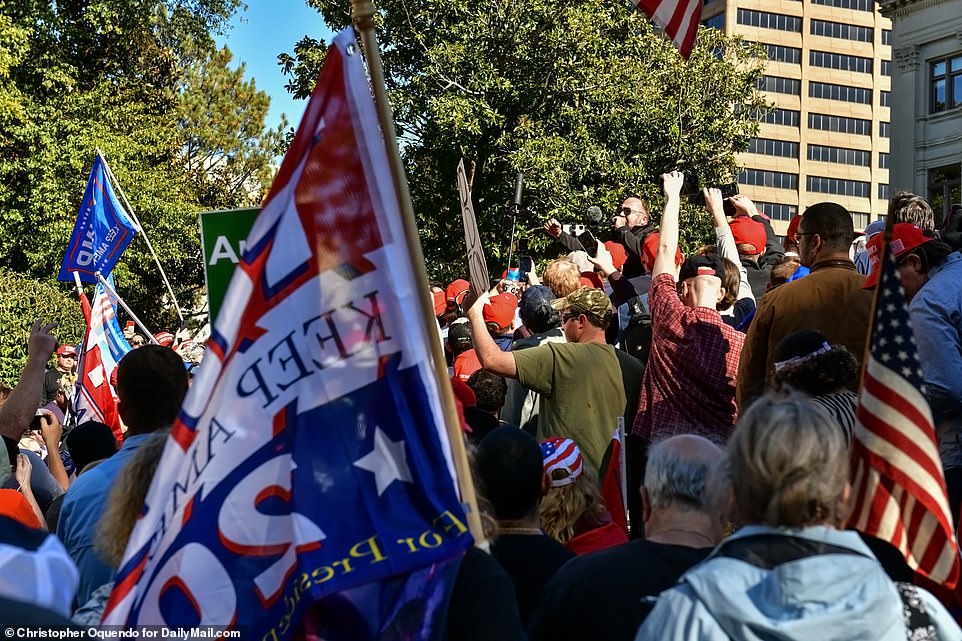 Biden shocked the political world by defeating Trump in Georgia, which has been a state that is historically friendly to Republicans 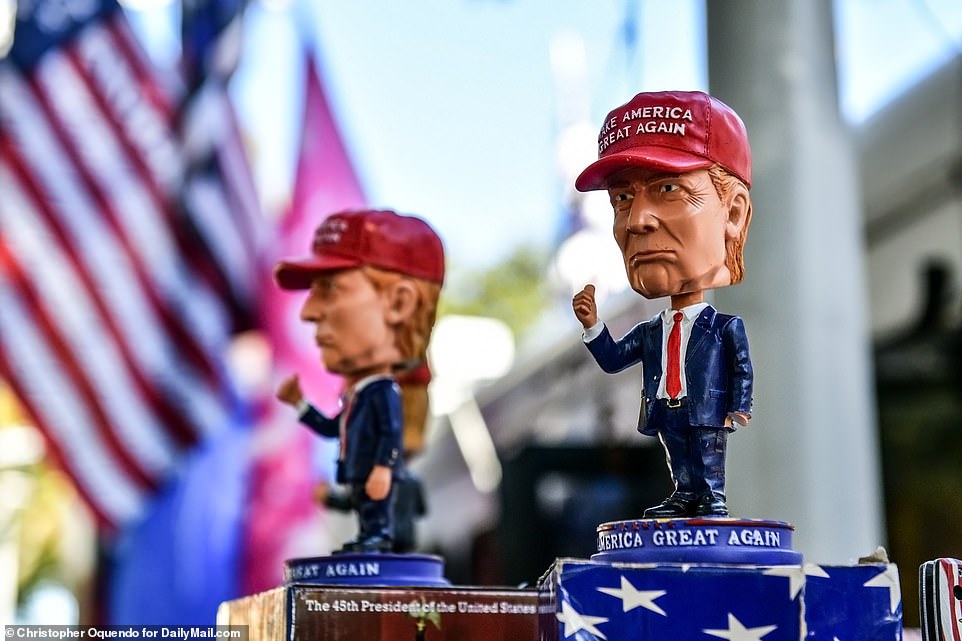 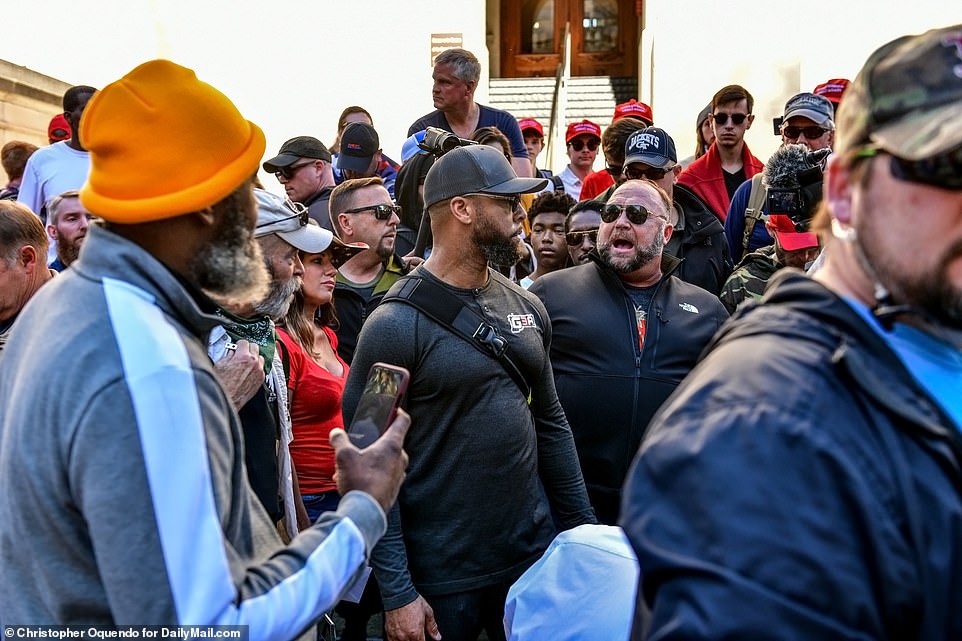 Despite the allegations by Trump and his supporters, no evidence indicating a conspiracy to fix the election for Biden has been uncovered

President Trump has pressured Kemp to certify the contest in his favor.

‘The Governor of Georgia, and Secretary of State, refuse to let us look at signatures which would expose hundreds of thousands of illegal ballots, and give the Republican Party and me, David Perdue, and perhaps Kelly Loeffler, a BIG VICTORY,’ he tweeted on Friday, adding ‘Why won’t they do it, and why are they so fast to certify a meaningless tally?’

Trump has also tried to use his powers of persuasion on local elected officials in Michigan, another key swing state that Biden won.

The top Michigan Republican legislative leaders who met with Trump at the White House as part of the president’s extraordinary move to try to overturn Biden’s popular vote win in the state said on Friday evening they will ‘follow the law.’

The lawmakers, Senate Majority Leader Mike Shirkey and House Speaker Lee Chatfield, issued a joint statement after flying to Washington to meet with the president – on a day Trump claimed he ‘won’ the election, despite trailing Biden by 6 million votes.

But the lawmakers said they have not seen anything that would ‘change the outcome’ of the race – despite Trump’s lawyers repeatedly claiming a ‘massive’ fraud had occurred. Their statement, however, also included language saying fraud should be ‘taken seriously’ and be prosecuted if uncovered.

‘We have not yet been made aware of any information that would change the outcome of the election in Michigan and as legislative leaders, we will follow the law and follow the normal process regarding Michigan’s electors, just as we have said throughout this election,’ Shirkey and Chatfield said in a statement.

It came after they got hounded by protesters upon arriving in Washington. They say they got invited to the White House Wednesday night.

‘The Senate and House Oversight Committees are actively engaged in a thorough review of Michigan’s elections process and we have faith in the committee process to provide greater transparency and accountability to our citizens,’ they said.

They also made a comment that echoed Trump’s complaint that two county election officials had faced harassment when certifying Biden’s win in Wayne County. They ultimately certified the results after getting blasted in a zoom session, then issued an affidavit seeking to ‘rescind’ it after certification.

‘Michigan’s certification process should be a deliberate process free from threats and intimidation. Allegations of fraudulent behavior should be taken seriously, thoroughly investigated, and if proven, prosecuted to the full extent of the law. And the candidates who win the most votes win elections and Michigan’s electoral votes. These are simple truths and should provide confidence in our elections,’ they said.

Biden is the first Democratic presidential candidate to carry Georgia since 1992.

Trump is trying to overturn the results of the election to his favor. His legal team has claimed massive voter fraud but has shown no proof of any.

Trump is running out of time. In just a matter of days, Michigan and Pennsylvania will certify their results. His lawsuits are going no where.

Raffensperger’s office stumbled earlier in the day when it prematurely announced the certification while it was still unfinished.

Forty minutes later, a corrected news release was sent out saying that the results would be released later.

The momentary slip was yet another moment of drama in a race that has been fraught with accusations.

Once Raffensperger certifies the results, Trump’s campaign will have two business days to request a recount since the margin is within 0.5 per cent.

That recount would be done using scanning machines that read and tally the votes and would be paid for by the counties, the secretary of state’s office has said.

The hand tally stemmed from an audit required by a new state law and wasn’t in response to any suspected problems with the state’s results or an official recount request.

The audit was meant to confirm that the voting machines correctly tabulated the votes.

The hand count produced some slight differences from the previous machine tally, but no individual county showed a variation in margin larger than 0.73 per cent, and the variation in margin in 103 of the state’s 159 counties was less than 0.05 per cent, the secretary of state’s office said.

During the audit, several counties discovered previously uncounted ballots and were recertifying their results.

Raffensperger also said Friday that he plans to propose legislative changes aimed at increasing trust in the results, including allowing state officials to intervene in counties that have systemic problems in administering elections, requiring photo ID for absentee voting and adding stricter controls to allow for challenges to voters who might not live where they say.

‘These measures will improve the security of our elections, and that should lead to greater public trust,’ he said.

Raffensperger, a self-described ‘passionate conservative,’ has endured criticism and insults from fellow Republicans – from the president to the chair of the state Republican Party – over his handling of the election. He acknowledged their feelings on Friday.

But Raffensperger, as he had repeatedly done before, defended the integrity of the process and the results.