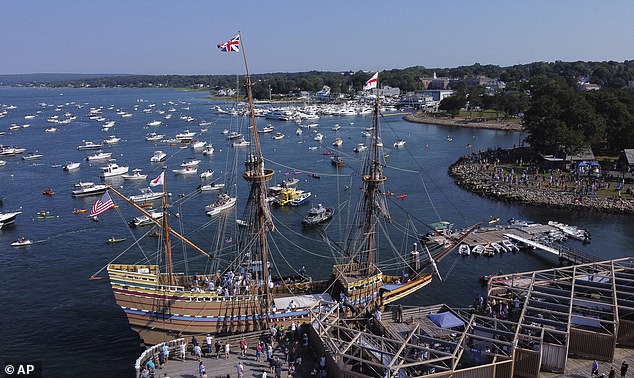 Like nearly every holiday or commemorative event in 2020, celebrations for the 400th anniversary of the historic Mayflower voyage were canceled or postponed this year due to the coronavirus pandemic.

The nation this month was set to mark the anniversary of arguably one of the most important dates in American history, the day the first Pilgrims arrived from England to what we now know as Plymouth, Massachusetts on November 21, 1620.

Dozens of events had been planned by Plymouth 400, Inc, a nonprofit in charge of organizing celebratory programs, before being pushed back to 2021 earlier this year.

The renovation and subsequent trans-Atlantic voyage of the Mayflower II, a replica of the 17th century ship, has been also delayed until next year.

Yet, the anniversary of what many would argue marked the founding of the nation, has been met with little fanfare elsewhere, during a year marred not only by a pandemic but by nationwide unrest over systemic racism.

November 21, 2020 is the 400th anniversary of the day the Mayflower arrived at what we now know as Plymouth, Massachusetts. (Pictured: The Mayflower II) 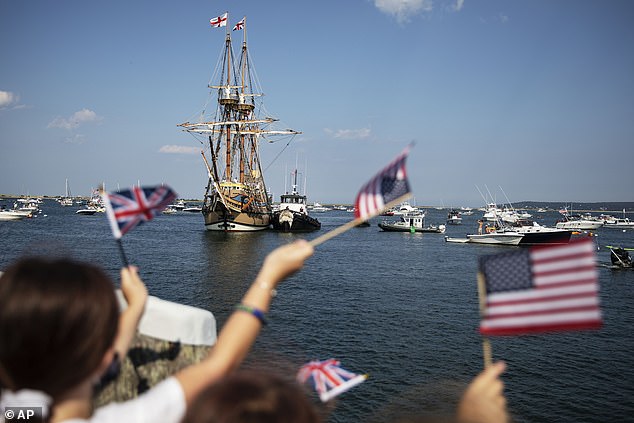 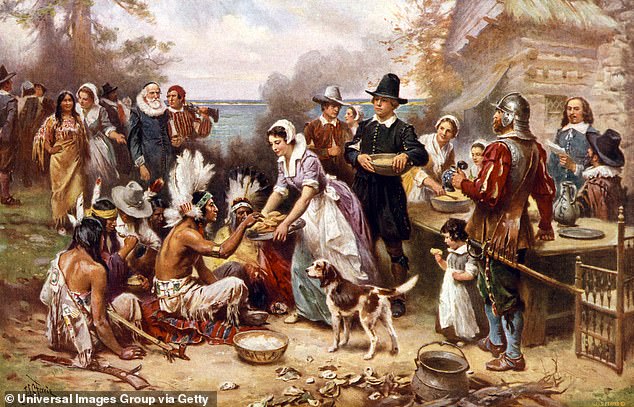 America’s reckoning on race has reignited a national conversation about social injustice as well as the country’s problematic history of slavery and colonialism.

The 1619 Project began as an essay published in a NYT Magazine special issue in August 2019.

The issue focused on the 400th anniversary of the first enslaved Africans being brought to the U.S. and slavery’s enduring legacy.

Journalist and creator Nikole Hannah-Jones was awarded the 2020 Pulitzer Prize for Commentary for the piece.

The project ‘aims to re-frame the country’s history by placing the consequences of slavery and the contributions of black Americans at the very center of the national narrative’, according to the website.

Its claims have been criticized and challenged by historians and conservative politicians.

The longstanding narrative of how the pilgrims came to establish the original 13 Colonies and their conquest of the land’s native people has been reexamined and debunked in recent years.

Most American children grow up with the feel-good story of the Pilgrims: How Native Americans extended the hand of friendship to the English settlers, helping them survive their first winter on these shores, and later joining them for the first Thanksgiving feast.

But modern day revisions show there is a darker side to that tale.

Critics have dismissed the portrayal of pilgrims as rugged pioneers and say they were actually colonizers who took part in a slow-motion genocide of Native Americans.

The counter-narrative of America’s dark past is perhaps most prominently promoted in The New York Times’ 1619 Project, launched in 2019, which ‘aims to re-frame the country’s history by placing the consequences of and the contributions of black Americans at the very center’.

The title refers to the year the first ship arrived on American soil carrying the first enslaved Africans – notably one year before the Mayflower arrived.

The project has been heavily criticized by many conservatives including President Trump who earlier this year announced plans to launch a counter-initiative dubbed the ‘1776 Commission’.

Fellow Republican Senator Tom Cotton last week also blamed the writers of the project for the lack of attention surrounding the Mayflower anniversary, accusing them of trying to rewrite history.

‘Regrettably, we haven’t heard much about this year’s anniversary because the Pilgrims have fallen out of fashion in elite circles,’ Cotton said in a speech on the Senate floor. 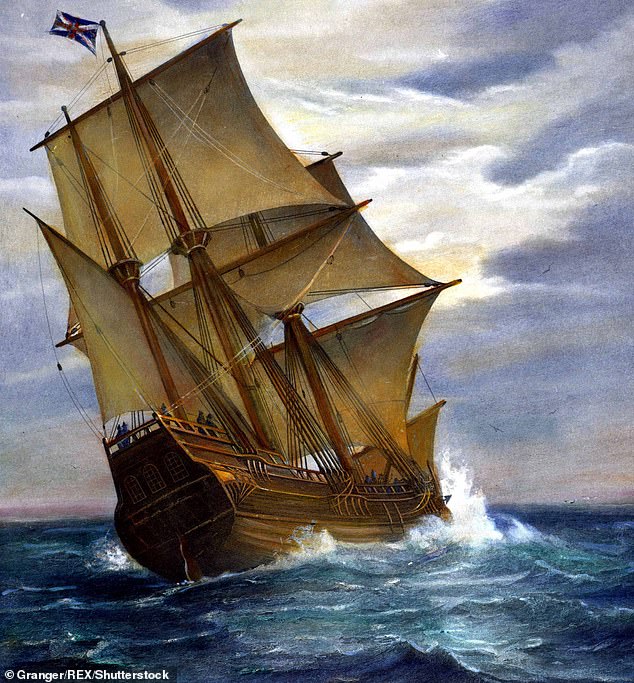 The story of how the Pilgrims came to establish the original 13 Colonies and their conquest of the land’s native people has been reexamined in recent years. 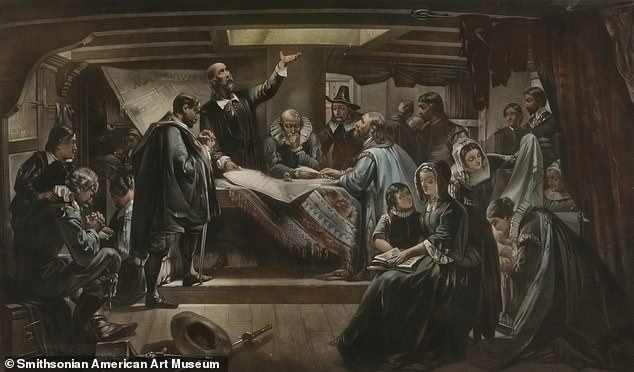 He then took aim at the New York Times over a recent article challenging the traditional story of the Pilgrims and the first Thanksgiving.

‘Just today for instance The New York Times called the [Pilgrims’] story a myth and a caricature. In the Food Section, no less,’ he said.

‘Maybe the politically correct editors of the debunked 1619 Project are now responsible for pumpkin pie recipes at the Times as well.’

Cotton went on to attack them as ‘revisionist charlatans of the radical left’ who have claimed the previous year as America’s true founding.

The senator reiterated his attack on Saturday in an essay published by Fox News. 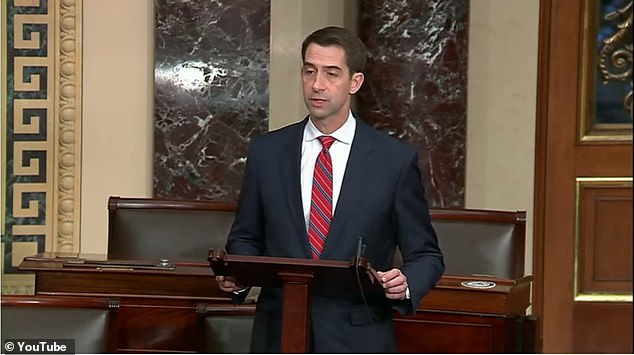 ‘In place of these so-called “myths,” the liberal newspaper seeks to substitute its own, claiming the history of our nation is an unbroken tale of conflict, oppression and misery,’ Cotton wrote.

‘But that’s a lie about our country and its founders. No matter what the revisionist historians at the Times cook up, the truth about the Pilgrims is more remarkable than any story or holiday special.

‘The story of the Pilgrims is not a myth or a caricature — it’s the living truth of history. What’s more, the faith, bravery and wisdom of the Pilgrims places them in the American pantheon. Alongside the patriots of 1776, the Pilgrims of 1620 deserve the honor of America’s founders,’ he said.

Cotton’s remarks  drew criticism by Democrats who accused him of perpetuating an elementary school narrative that does not exist.

‘When your sense of history doesn’t go beyond your 3rd grade coloring books and actual history terrifies you,’ Rep Ilhan Omar said on Twitter, in response to his speech.

‘I see Tom Cotton and I had the same third grade teacher. Somehow, between then and HARVARD, he managed to never get the rest of the story,’ journalist Stephen Holder tweeted.