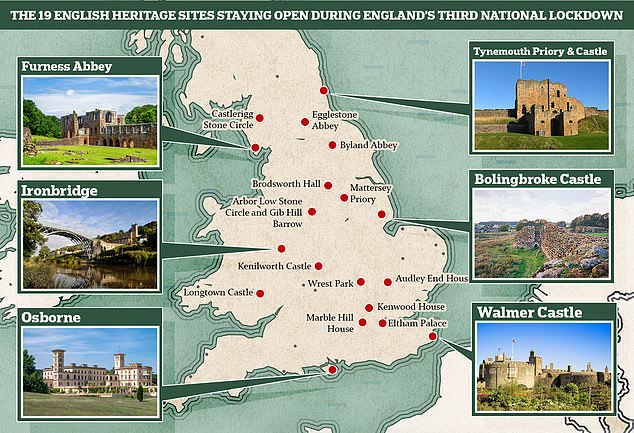 English Heritage today revealed 19 major castles, houses and monuments it will keep open during the country’s third national lockdown for people to use for exercise.

The grounds of sites such as Kenilworth Castle in Warwickshire, Walmer Castle in Kent and Longtown Castle in Herefordshire will be remaining open to the public.

Londoners will be allowed to stroll through the grounds of Eltham Palace near Greenwich, Kenwood House in Hampstead and Marble Hill House in Twickenham.

Those living in other parts of South East England can go to the gardens at Audley End in Essex, Osborne House on the Isle of Wight and Wrest Park in Bedfordshire.

The announcement comes as the Government revealed people will still be able to visit public gardens and the grounds of a heritage site during the new lockdown. 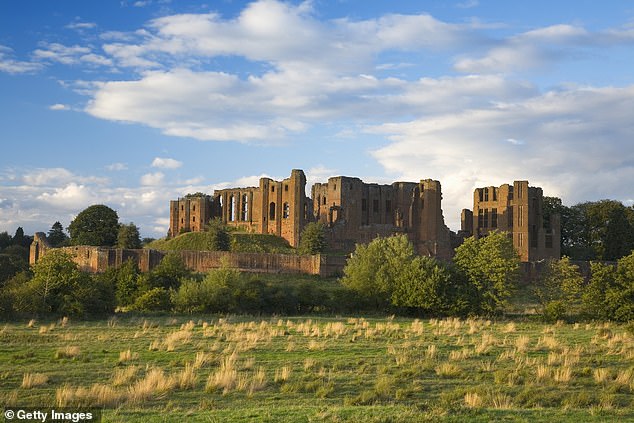 Kenilworth Castle in Warwickshire has existed for 900 years and went from medieval fortress to Elizabethan palace. The site features a mighty Norman keep and a majestic Great Hall

They will be allowed to visit with members of their household or support bubble, and can attend with one person from another household if they are on their own.

Other sites remaining open include Arbor Low Stone Circle and Gib Hill Barrow in the Peak District, Bolingbroke Castle in Lincolnshire and Iron Bridge in Shropshire.

Also on the list are Mattersey Priory in Nottinghamshire, Byland Abbey in North Yorkshire and Castlerigg Stone Circle in Shropshire.

Further sites include Egglestone Abbey in County Durham, Furness Abbey in Cumbria, the grounds of Brodsworth Hall in South Yorkshire and Tynemouth Priory and Castle in Tyne and Wear.

A total of 200 free-to-enter English Heritage sites will remain open, with the 19 major ones highlighted today.

English Heritage car parks will generally be closed if the site is shut, although some are operated by local councils so they may still be open.

All members and other visitors must book tickets in advance to staffed sites with limitations placed on numbers.

English Heritage has also reminded people that Government rules state they should not travel outside their ‘local area’ when visiting any of their sites.

An English Heritage spokesman said today: ‘We are keeping a selection of sites open for local people to use for exercise during the lockdown period.

‘All these sites have plenty of outdoor space for safe social distancing. As before, visits to staffed sites must be booked in advance and numbers will be limited.

‘Please stay local, bear in mind the government’s latest advice, and be aware that you should not travel outside of your local area.’

Staff urged people to avoid visiting if they or anyone in their household are displaying symptoms of Covid-19.

They also asked visitors to follow government and site guidelines on social distancing and hygiene, queue alone if they can and keep an eye on children.

However some local residents near open sites have raised concerns that people will travel long distances to visit them despite the rules on local-only travel.

Julie McGrory, of Silsoe in Bedfordshire, where Wrest Park is located, asked English Heritage on Twitter: ‘Are you able to confirm you’ll be checking it’s only local people booking tickets in their relevant village? In Silsoe our residents remain concerned people will travel to us despite the rules on travel.’ 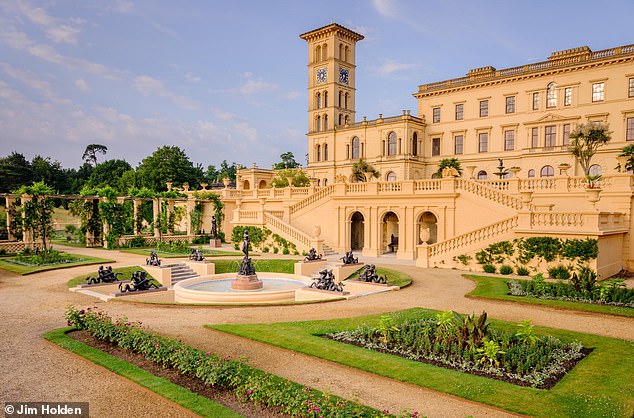 Osborne House on the Isle of Wight is the palatial former holiday home of Queen Victoria and Prince Albert, which features a colourful walled garden and a shaded woodland walk 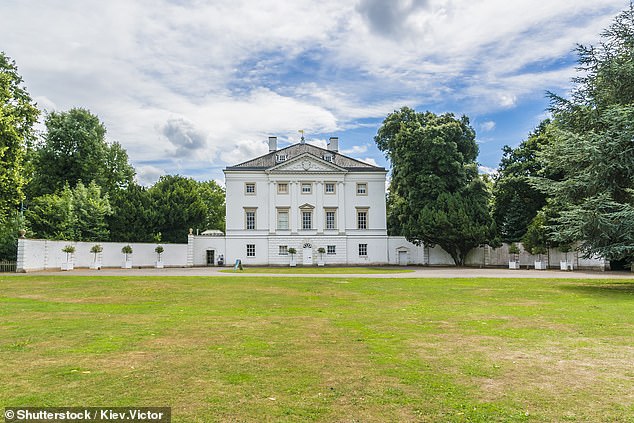 Marble Hill House in Twickenham, South West London, is set in 66 acres of riverside parkland. It was built for Henrietta Howard, mistress of King George II when he was Prince of Wales

Another Twitter user asked: ‘It’s a good point – what also constitutes as local? Kenilworth Castle is 10 miles away from me – is that local?’

And English Heritage replied: ‘We’re asking everyone to follow government guidance before planning a visit. The government hasn’t defined what counts as a local visit, so unfortunately we’re not able to advise on how far you should travel.’

English Heritage replied: ‘We understand your concerns and we’re opening Wrest Park for local people for exercise only. We’re asking everyone to kindly follow the government guidance when planning a visit.’

Just before the first lockdown began last year, English Heritage initially closed all its sites from March 18 until May 1.

This was then extended as the lockdown continued, before it opened six sites across the country on June 13. 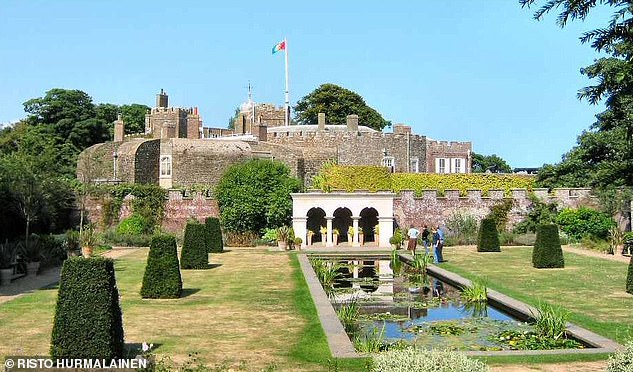 Walmer Castle in Kent features eight acres of award-winning gardens and was once a Tudor artillery fortress. It became a stately-home for the Lords Warden of the Cinque Ports 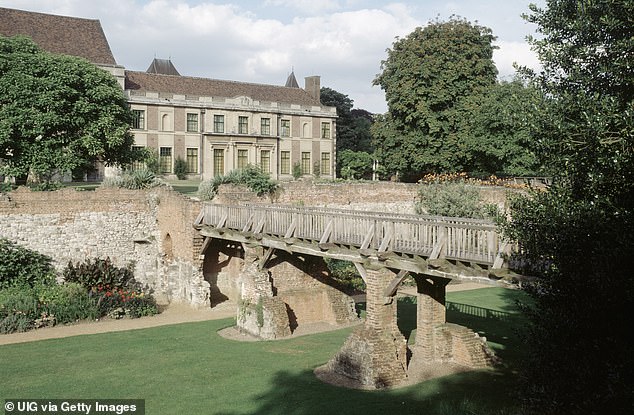 Eltham Palace near Greenwich in South East London features 19 acres of gardens and a striking Art Deco mansion. It was once a favoured medieval palace and then a Tudor royal residence

A further 45 sites were opened at the start of July, with most of the rest opening by August, although some stayed shut.

The National Trust has confirmed its gardens, parks and countryside in England will remain open during the lockdown for local people to exercise.

Its shops will close but some cafes will offer takeaway, and a booking system remains in place to restrict capacity and help with social distancing.

In Wales, all National Trust places are currently closed in line with the country’s rules, while houses, shops and visitors centres in Northern Ireland are also shut. 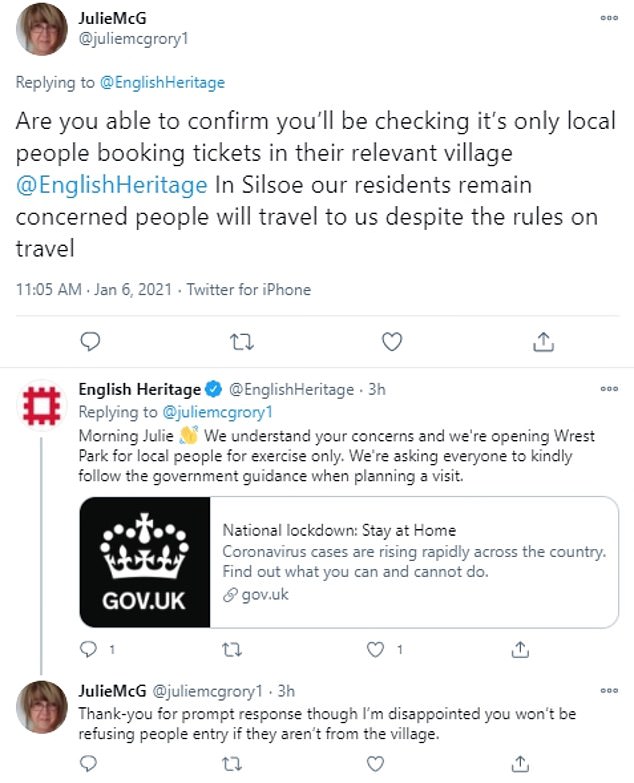 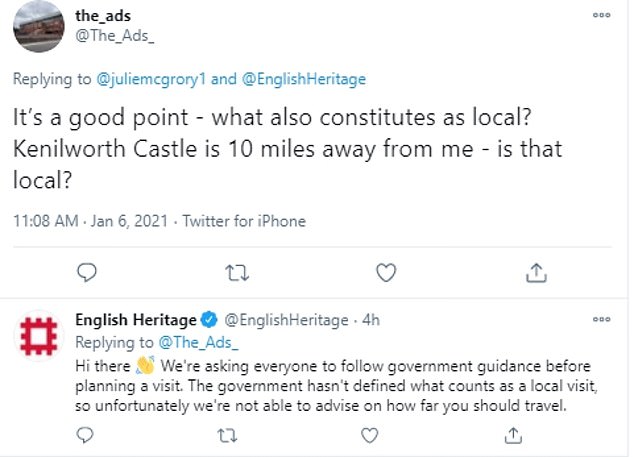 During the first lockdown, the National Trust began its phased reopening of some gardens and parklands in England on June 3, with 29 sites opening their gates.

Heritage organisations have seen their income plummet during the pandemic with the Government giving them a financial boost last October to help.

The £103million funding supported 445 organisations to carry out repair and maintenance work on cherished heritage sites to keep the venues running.