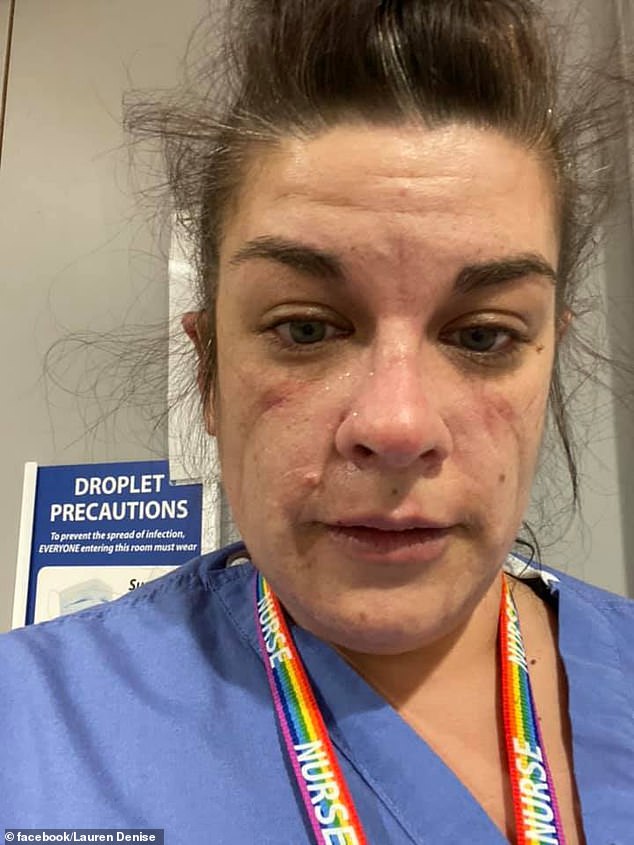 ‘This was my breaking point’: Nurse posts selfie of her sore and exhausted face after harrowing shift in full PPE as she tells people ‘do what we are told – just so we can be with each other safely again’

A nurse has posted a selfie showing her sore and exhausted face after a harrowing shift in full PPE.

Lauren Morrisroe, a nurse in Northampton, asked people to follow the Government lockdown guidance ‘just so we can be with each other safely again’.

She revealed she reached ‘breaking point’ after a patient lashed out while being transferred between wards.

Hospital porters were not able to help move patients hooked up to  continuous positive airway pressure (CPAP) machines, she said.

‘Last night I got dressed in PPE, whilst the porters closed off all the corridors to a ward. I went into the patients room to put all the attached machine on the trolley ready to transport.

Lauren Morrisroe (pictured), a nurse in Northampton, asked people to follow the Government lockdown guidance ‘just so we can be with each other safely again’

‘I waited for the ok to take the patient out the room, and off I went. I had to push the patient on the trolley, along with all the machines as the porters can’t take patients on CPAP to the ward.’

She went through the corridor, into a lift, through another corridor and into another lift before a staff member in full PPE could help her.

‘Staff on the ward all had to move out of the way except one that was also ready in PPE,’ she said. ‘We went into the room, me, another nurse with the patient and carefully took the monitoring off the patient, careful not to pull at the attached wires, we were then ready to slide them onto the bed from the trolley.’ 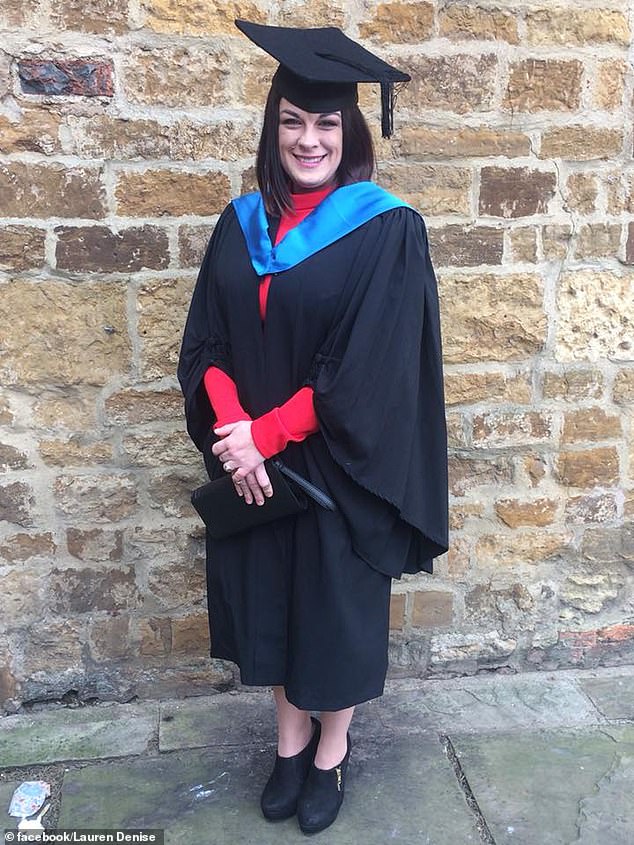 She revealed she reached ‘breaking point’ after a patient lashed out while being transferred between wards. Pictured, on her graduation day

As the patient regained consciousness they started to ‘swing punches and grab’ at the nurses who had to lift them onto a hospital bed.

‘It was this point they woke up very confused and disoriented and began to swing punches and grab at me and the other nurse, not their fault as they had no clue what was happening,’ she said.

‘We slid the patient onto the bed that weighed more than me and the other nurse combined.’

After the difficult transfer Ms Morrisroe left the room to remove her PPE and took out her phone to check her ‘sore’ face.

‘This was what was staring back at me,’ she said. ‘This was my breaking point.’ 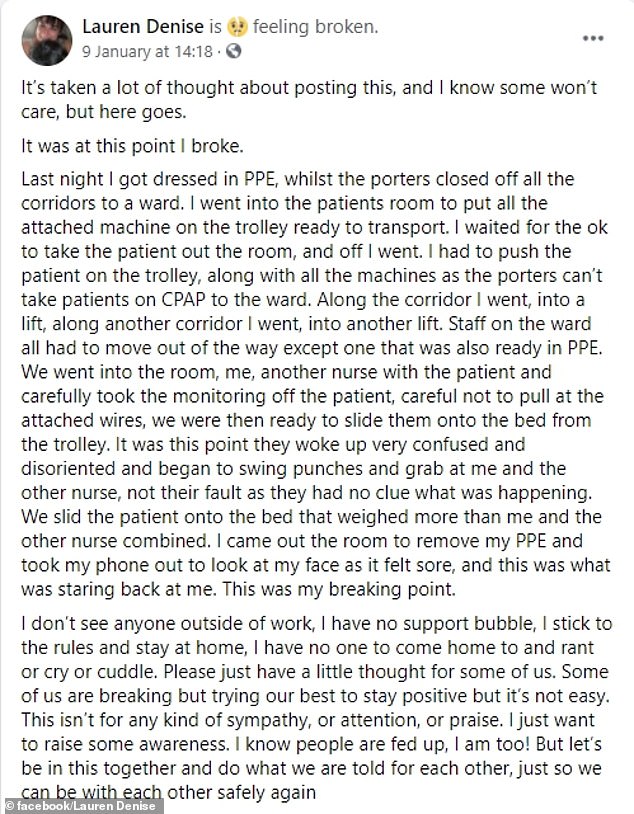 Ms Morrisroe revealed she doesn’t have a support bubble and sees no one outside of work, adding: ‘I stick to the rules and stay at home, I have no one to come home to and rant or cry or cuddle. Please just have a little thought for some of us.

‘Some of us are breaking but trying our best to stay positive but it’s not easy. This isn’t for any kind of sympathy, or attention, or praise.

‘I just want to raise some awareness. I know people are fed up, I am too! But let’s be in this together and do what we are told for each other, just so we can be with each other safely again.’

It comes as the country recorded a further 529 Covid deaths on Monday – marking a 30 per cent rise on the 407 reported on the same day last week.

It was the deadliest Monday since April 20 when 570 people lost their lives and it marked the worst week for deaths in Britain since the pandemic began.

An average of 931 people have lost their lives on each of the past seven days, compared to the highest seven-day average of 920 in April’s first wave.

But, in a positive sign that the UK’s soaring case load may be leveling out, 46,169 people tested positive for the virus – down 20 per cent in a week.