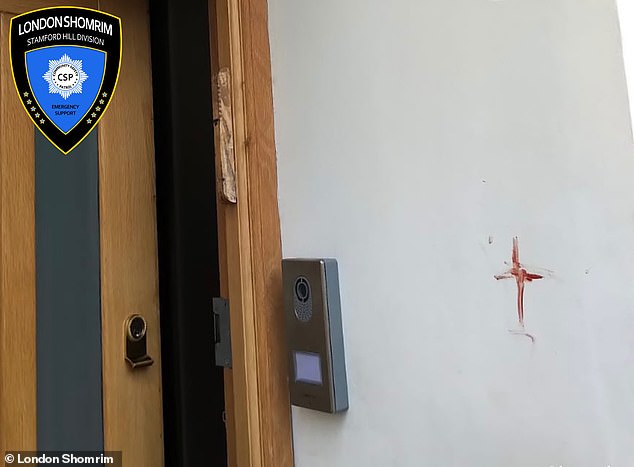 The doorways of several Jewish homes have been smeared with blood in the shape of a cross in a suspected anti-Semitic hate crime.

The homes are in Stamford Hill, east London, an area inhabited by around 15,000 members of the ultra orthodox Jewish community.

Hackney Police are investigating the crime, which has been likened by members of the Jewish community to the actions of the Klu Klux Klan.

No arrests have been made concerning this incident, but police say they believe the culprit could be a local resident with ‘mental health’ issues.

Shomrim – the volunteer based force that protects the area – tweeted about the attack on Sunday.

They wrote: ‘Hate Crime and Antisemitism 2am, several Jewish houses had crosses daubed onto their homes, offender appears to have used blood.’

Three homes were daubed with blood in the shape of a crucifix in east London’s Stamford Hill, an area home to  around 15,000 members of the ultra orthodox Jewish community

Three homes were left with the mark on the doors of their home, the Metropolitain Police confirmed.

President of Shomrim, Rabbi Herschel Gluck OBE said: ‘This attack bears similarities and invokes comparisons with actions by the KKK.

‘It has a deep and profound meaning – the smearing of blood in this manner is deeply troubling for our community and invokes traumatic memories of pogroms and murders.

‘When a person chooses to specifically place these daubing’s on three Jewish homes, he is probably aware of its traumatic effect.’

Homes belonging to religious Jews are easily recognisable due to a commandment to have an encased parchment – known as a mezuzah – fixed to the doors. 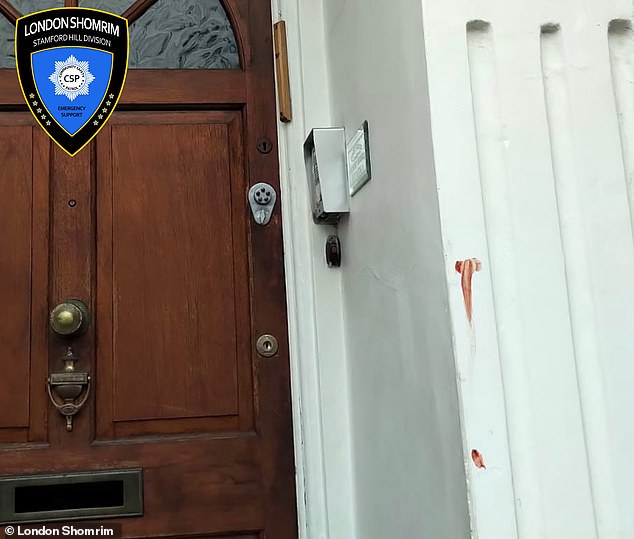 Police confirmed they are investigating the suspected anti-semitic hate crime, which members of the Jewish community likened to the anti-semitic actions of the Klu Klux Klan 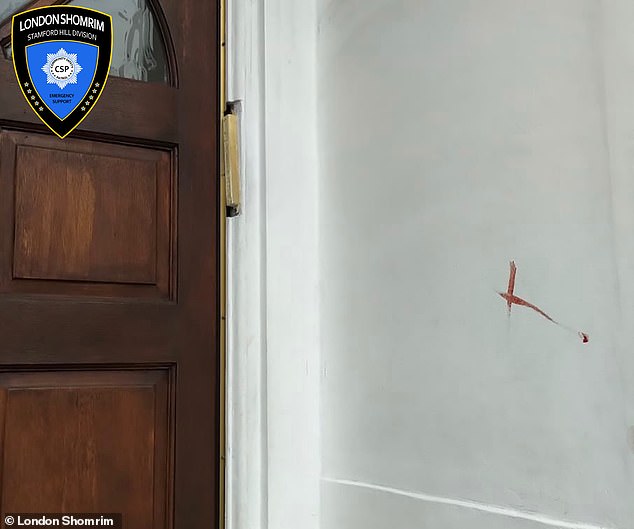 A Shomrim spokesman said that the families affected were ‘shocked’ and were being supported.

They added that they hoped to catch the culprit through DNA samples and were looking at obtaining CCTV.

One Stamford Hill resident said: ‘Some guy was knocking on doors in the middle of the night.

‘No one answered, they didn’t take notice. The next morning there was real blood on the wall like a cross, drawn from real blood.’

The resident added that no one saw the culprit and it is unknown if it was an individual or a group.

The Shomrim spokesman added: ‘The families involved are shocked to wake up to find a cross drawn in blood.

‘As a whole, the community has seen a sustained growth in antisemitic hate crime over the last few years.

‘Shomrim are supporting the victims and have asked police to take DNA samples of the blood before it is removed.

‘Currently the culprits are unknown and Shomrim are making CCTV enquiries.

‘The homes targeted all had a prominent Mezuzah and the crosses were daubed onto the homes near the Mezuzah.’

Rabbi Gluck added: ‘Over the past four months, antisemitic attacks have risen exponentially and there hasn’t been any proportionate and resolute action by the police to counter this.

‘This feeds into the racist mindset that Jews are a soft target, which is of profound concern to us.’

It is understood no arrests have been made concerning this incident, but police say they believe the culprit could be a local resident with ‘mental health’ issues.

The Metropolitan Police spokesman said: ‘On the evening of Sunday, 10 January police were informed that during the previous night, small crosses had been daubed on the walls of three homes in Portland Avenue, Stoke Newington.

‘Officers attended to speak to the residents of the three properties and ascertained that the person believed to be responsible was a local resident who is well known to people in the area but who suffers with mental ill health.

‘Local officers have been made aware and will ensure that the incident is addressed in the most appropriate way.’