Sarah Michelle Gellar is a Hollywood veteran with hit movies like Cruel Intentions and the TV series Buffy The Vampire Slayer behind her.

But the 43-year-old actress does not seem to age.

On Sunday the wife of actor Freddie Prinze Jr shared a swimsuit photo where she looked as if she was in her thirties.

A pinup: Sarah Michelle Gellar is a Hollywood veteran with hit movies like Cruel Intentions and a TV series (Buffy The Vampire Slayer) behind her. But the 43-year-old actress does not seem to age

The star resembled a Golden Age Hollywood bombshell as she wore a one piece, one strap black swimsuit that made the most of her small waistline and lean legs.

She smiled and held up a drink while her blonde hair was down and she had sunglasses on.

And the location was just as dreamy: Sarah was sitting on the bar that separated the hot tub and swimming pool. 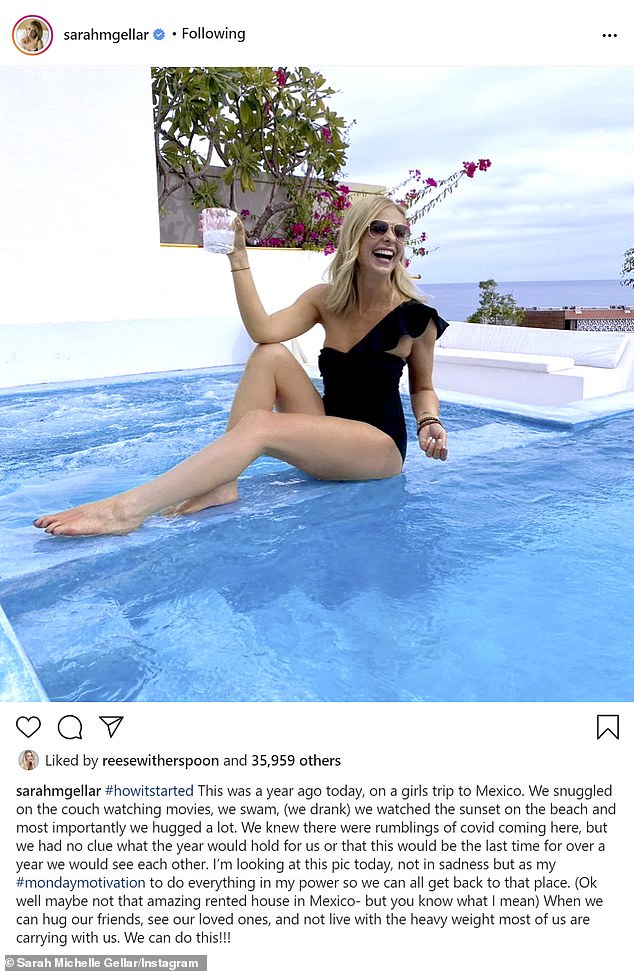 The girl has legs: The star resembled a Golden Age Hollywood bombshell as she wore a one piece black swimsuit that made the most of her small waistline and lean legs

The building was white and had a breathtaking view of the ocean below.

She said she was in Mexico and the image was a flashback photo from one year ago.

‘This was a year ago today, on a girls trip to Mexico. We snuggled on the couch watching movies, we swam, (we drank) we watched the sunset on the beach and most importantly we hugged a lot. We knew there were rumblings of covid coming here, but we had no clue what the year would hold for us or that this would be the last time for over a year we would see each other,’ said Gellar.

‘I’m looking at this pic today, not in sadness but as my #mondaymotivation to do everything in my power so we can all get back to that place. (Ok well maybe not that amazing rented house in Mexico- but you know what I mean) When we can hug our friends, see our loved ones, and not live with the heavy weight most of us are carrying with us. We can do this!!!’ 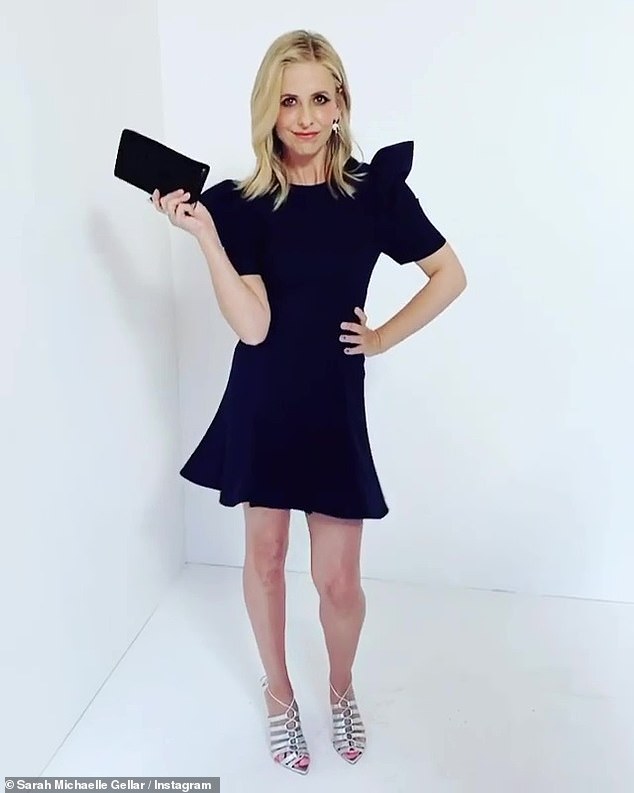 Before New Year’s: She was dressed in a nifty black dress with silver heels

On New Year’s Eve she posted multiple pictures to her Instagram account and story depicting her flipping off the camera.

Like many other celebrities, the star has been fed up with the circumstances that the coronavirus pandemic has forced on everyone and made her feelings known with a cathartic selfie.

The actress could be seen wearing a burgundy hoodie featuring a graphic for the band Def Leppard emblazoned across its front; she also kept her flowing blonde hair tied back for the snap.

Gellar also wrote a lengthy caption in which she discussed the changes that were forced on her life due to the ongoing state of the pandemic.

The caption began with a straightforward message regarding the end of the year, as she stated: ‘This is my goodbye to 2020. I have hope for 2021.’

The I Know What You Did Last Summer actress went on to list the things that she and her loved ones had not been able to do for an extended period of time. 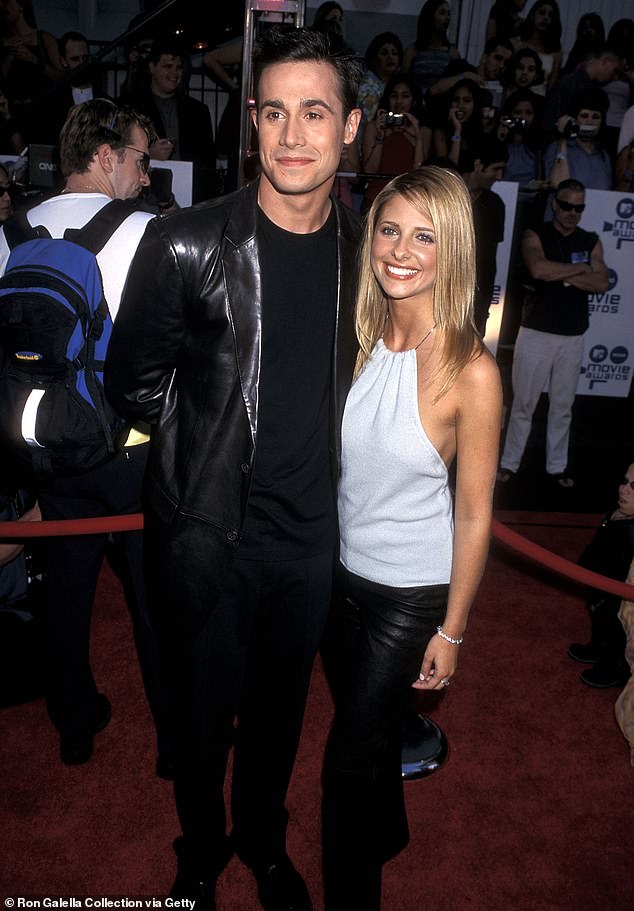 She added: ‘I hope my children can step foot in a classroom for the first time since March. I hope to hug my friends back home in NYC that I haven’t seen since March.’

After speaking about the difficulties that she personally experienced and the sympathy that she had for frontline workers, Gellar then elaborated on what the extended period of quarantine did to her relationship with her family.

The actress wrote: ‘This year was the hardest I can remember. But it also had its beauty. Never in my life would I have ever been afforded this kind of quality time with my kids and my husband.’

The Cruel Intentions actress then affirmed her dedication to keeping up with whatever new rules would be mandated in order to slow the spread of the coronavirus.

‘I would love to find myself in new places, exploring new surroundings, but I will continue to choose to be part of the solution and follow the guidelines,’ she added. 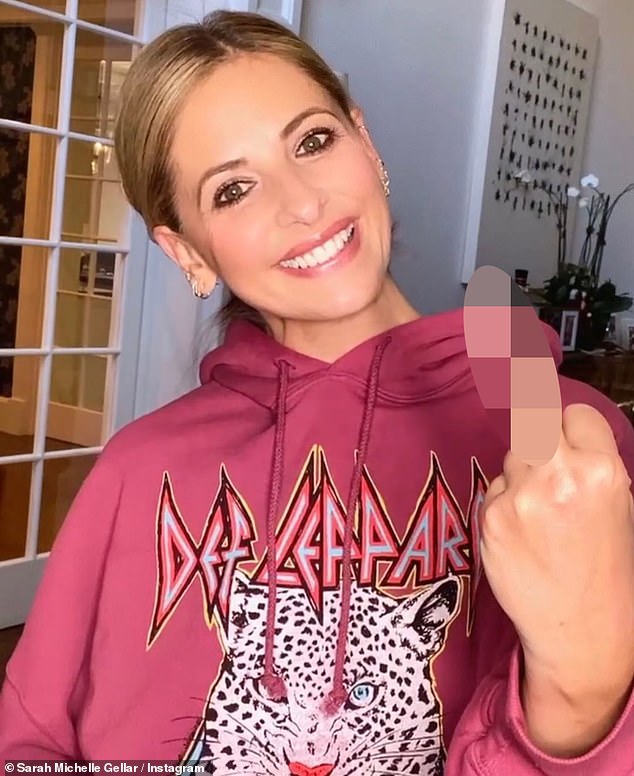 Ready for it to end: Gellar posted multiple photos to her Instagram account and story on Thursday depicting her flipping off the camera in celebration of the final day of 2020

Gellar finished her message by opining that she would be fine with losing one year of celebrations if she was ensured that the rest of them would be safe and healthy.

She ended with: ‘I will gladly give up this holiday season in exchange for a lifetime of them, for me, my loved ones, and everyone sacrificing. Thank you to everyone doing the same. Peace out 2020 (I won’t miss you).’

After posting the selfies, the Scooby-Doo actress took a walk to go drop some documents off at her local post office in Santa Monica.

The actress was depicted looking down at her phone as she took a small stroll.

In addition to the aforementioned hoodie, the Scream 2 actress wore a pair of black athletic leggings which were contrasted with white running shoes, and accessorized with a pair of aviator sunglasses.

Gellar took no chances with her health and wore a leopard print face mask during her trip.

You can watch Buffy the Vampire Slayer on Stan in Australia