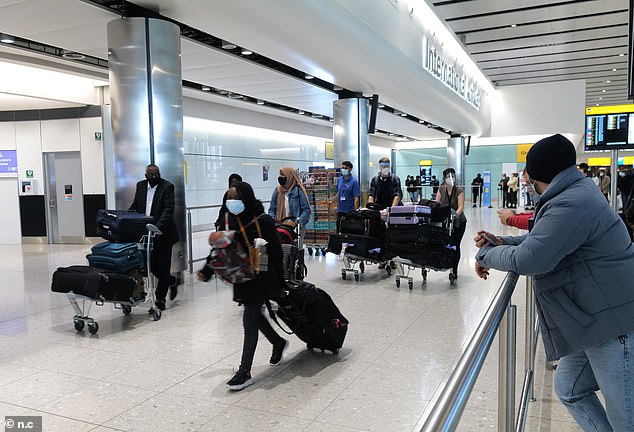 Ministers will allow UK arrivals without a negative Covid test into the country this weekend after their plan for tighter border controls sparked passenger panic.

The Government was preparing to enforce a stricter regime requiring tests 72 hours pre-departure from 4am on Friday, but this has now been pushed back to Monday.

The delay came after passengers booked on long-haul flights scrabbled to find tests in time and feared they would incur £500 fines if unable to access one.

Airlines also hit out at the Government for a lack of clarity over which types of tests would be accepted.

Late Wednesday night the Department for Transport fleshed out the details of the new policy and confirmed that even rapid-result lateral flow tests would be fine.

Ministers will allow UK arrivals without a negative a Covid test into the country this weekend after their plan for tighter border controls sparked passenger panic. Pictured: Heathrow airport today 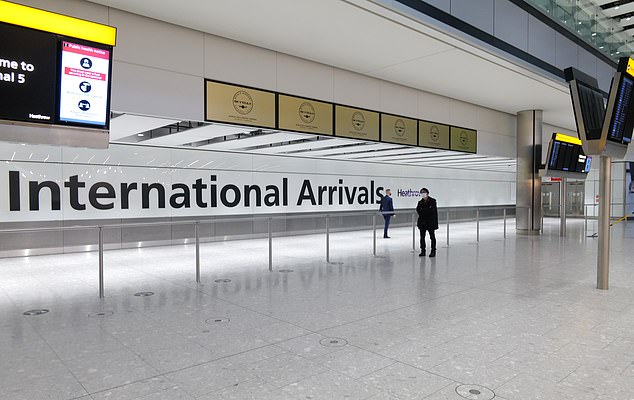 Transport Secretary Grant Shapps tweeted: ‘To give international arrivals time to prepare, passengers will be required to provide proof of a negative COVID-19 test before departure to England from MONDAY 18 JANUARY at 4am.’

Guidance published by the department said travellers arriving before this deadline ‘are under no legal obligation to get a test before you travel’.

‘You should not be denied boarding for failing to provide proof of a negative test result, and will not be fined on arrival into England.’

Passengers were nevertheless still urged to produce a negative test result anyway, although failure to do so will not be punished with fines until Monday.

Airlines will then also liable for up to £2,000 penalties per passenger if they fail to enforce the law.

All tests must meet performance standards greater than 97 per cent specificity and 80 per cent sensitivity.

The DfT also published a list of jobs exempt from the testing regime, including hauliers, defence staff, and travel crew. 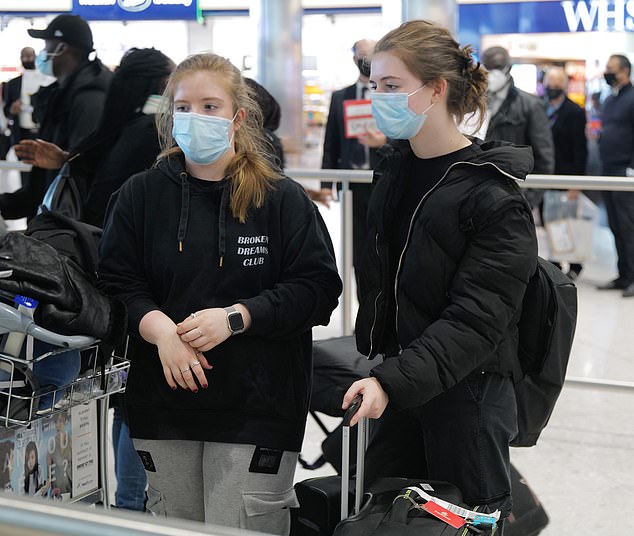 It came as Boris Johnson was grilled today on measures being put in place to insulate the UK from a new Brazilian strain of coronavirus.

Home Affairs Committee chairwoman Yvette Cooper subjected the Prime Minister to intense questioning over border measures saying the nation could have ‘stronger quarantine and stronger checks like very many other countries do’.

‘We were warned about the Brazil variant three days ago, we don’t know yet whether that will potentially undermine the vaccination programme so why aren’t you taking immediate action on a precautionary basis?’ she asked.

Ms Cooper asked: ‘Are you, that’s a new announcement?’

‘No sorry I said what we were looking at was the question of whether or not the Brazilian variant is immune resistant,’ he said.

Pressed on whether this means a new travel ban being imposed on Brazil, he said: ‘We are taking steps to ensure that we do not see the import of this new variant from Brazil.’

Ms Cooper repeatedly pressed on what those steps exactly are, to which Mr Johnson cited the incoming plans for negative tests before departure being needed.