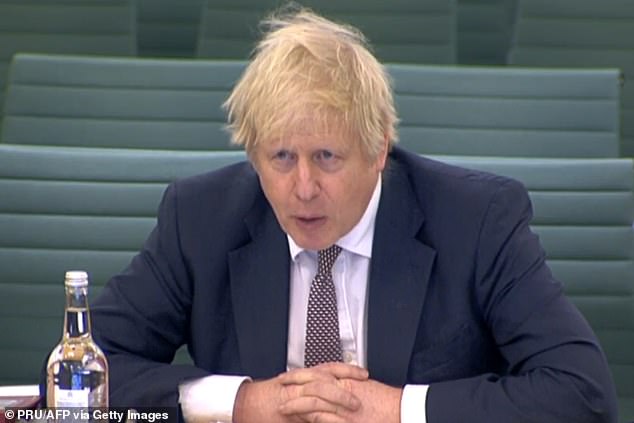 Boris Johnson warns a THIRD Covid strain could be heading to the UK: PM says No10 is ‘taking steps’ to stop Brazilian variant which experts fear is similar to highly contagious Kent and South African strains

Boris Johnson today claimed No10 is ‘taking steps’ to protect the UK from a Brazilian Covid variant which experts fear is similar to the highly contagious Kent and South African strains.

The Prime Minister revealed officials were looking at ways to stop the variant found in travellers from Brazil — but dodged questions about whether Britain would adopt a travel ban.

Speaking to MPs this afternoon, he said: ‘We are concerned about the new Brazilian variant.

‘We already have tough measures, as you know, to stop from new infections come from abroad. We are taking steps to do that in response to the Brazilian variation.’

Scientists working in Britain have not yet announced any coronavirus cases caused by the variant on UK soil.

It is normal for viruses to mutate and early signs don’t suggest that any of the new variants of coronavirus are more deadly than others, but in some places it is evolving to be able to spread faster.

If the virus is faster spreading it will inevitably lead to more cases which will in turn lead to a higher death count, even if the strain itself isn’t more dangerous.

The variant that emerged in Kent, now estimated to be around 56 per cent more transmissible than its predecessor, has quickly become the dominant form of the virus in England and has led to the country’s longest and toughest lockdown since March 2020.

The mutant strain of coronavirus was discovered in Japan last week in four people who had arrived on a flight from Brazil.

Scientists said it had similarities to that of the highly contagious variants in Britain and South Africa.

Namely, it has a genetic mutation called N501Y, which changes the shape of the spike proteins found on the outside of the virus.

This mutation makes the virus more able to latch onto the receptors inside the body that it targets, essentially meaning it successfully makes it past the body’s natural defences more often.

Therefore people who are exposed to the virus become infected more often than they would if the other person was infected with an older, less contagious strain.

A World Health Organization report on the variant last week said: ‘The variant was identified when whole-genome sequencing was conducted on samples from 4 travellers from Brazil who were tested at the airport…

‘Through our regional offices, we are working with both Japanese and Brazilian authorities to evaluate the significance of these findings.

‘We are also working with our Viral Evolution Working Group to assess the significance of this, and if this variant as well as others identified in recent months result in changes in transmissibility, clinical presentation or severity, or if they impact on countermeasures, including diagnostics, therapeutics and vaccines.’

It added: ‘The same comprehensive approach to controlling Covid-19 works against these variants.

Speaking in this afternoon’s Liaison Committee meeting, Boris Johnson said: ‘We are concerned about the new Brazilian variant.

‘We already have tough measures… to protect this country from new infections coming in from abroad.

‘We are taking steps to do that in respect of the Brazilian variant.’

He added: ‘There are lots of questions we still have about that variant, we don’t know for instance, any more than we know whether the South African variant is vaccine resistant.’