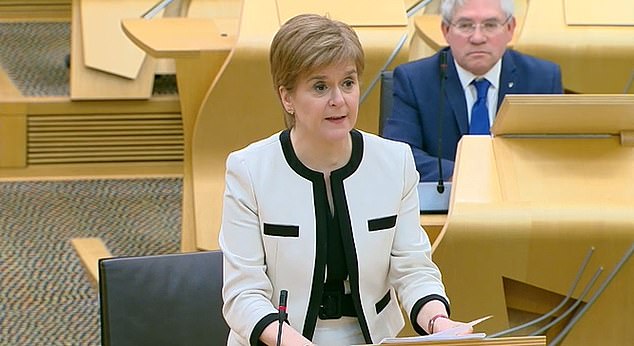 From Saturday people picking up takeaway meals will be barred from entering eateries, instead having to wait outside, she told the Scottish Parliament.

And new laws will be brought in to put a legal requirement on businesses to force them to allow staff to work from home if they can do so.

Addressing MSPs at Holyrood she said new lockdown restrictions appear to be having an effect, with the rise in new daily cases seen around the turn of the year slowing down.

However, she said there is ‘no room for complacency’, adding: ‘It is too soon to be entirely confident that the situation is stabilising.

‘Even if it is, this will only be because of lockdown – it is not, unfortunately, an indication that it is safe to ease it yet in any way.’

Pressure on the NHS, Ms Sturgeon said, was likely to continue ‘for some time’ as she urged people to continue to adhere to the new regulations.

Alcohol consumption outdoors in all Level 4 areas of Scotland will be banned, under new regulations, meaning anyone who buys takeaway alcohol must consume it in their own home.

Ms Sturgeon’s decision is likely to pile the pressure on Boris Johnson who is also thought to be considering tightening the rules in England.

Only retailers selling essentials, such as clothing, baby equipment and books, will be able to offer collection services in Scotland from this weekend.

From Saturday people picking up takeaway meals will be barred from entering eateries, instead having to wait outside, she told the Scottish Parliament. 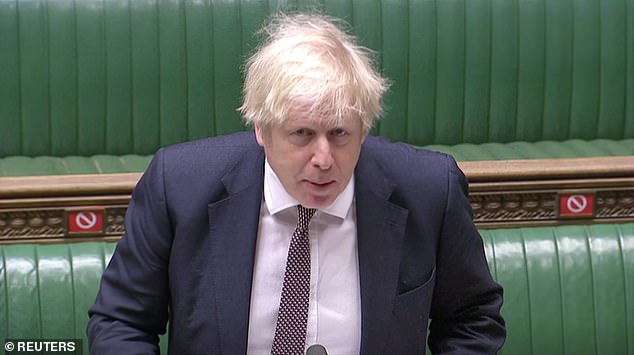 What is classed as an ‘essential item’ for click-and-collect?

Nicola Sturgeon today set out in the Scottish Parliament that click-and-collect would be limited to a range of essential items. They include:

For those allowed to continue, the First Minister said ‘staggered appointments’ will be needed to end queuing, as well as not allowing people inside premises.

The First Minister said: ‘I know that businesses affected by this change will be disappointed and that many have gone to great lengths to make services as safe as possible.

‘But we must reduce as far as is possible the reasons people have just now for leaving home and coming into contact with others.

‘I welcome the actions of those businesses that have voluntarily suspended click and collect and tightened their procedures in relation to face coverings.’

Scotland has recorded 79 deaths of coronavirus patients and 1,949 new cases in the past 24 hours. It’s coronavirus death toll now stands at 5,102.

The Scottish Government will seek to close a loophole allowing people to do non-essential things during lockdown.

The First Minister told MSPs regulations would be changed, forbidding people from leaving home for an essential purpose and then doing something considered not to be essential after they have left the house.

While the list of essential reasons for leaving home will not change, the First Minister said: ‘It does mean that if the police challenge you for being out of the house doing something that is not essential, it will not be a defence to say you initially left the house to do something that was essential.’

Mr Johnson today hailed ‘early’ signs that the brutal lockdown is bringing coronavirus under control in England as he clashed with Keir Starmer at PMQs – but refused to rule out tightening the rules there further.

The premier insisted the measures in England were being kept ‘under constant review’ as the Labour leader demanded to know why they were looser than last spring despite cases being higher.

He also angrily denied dragged his heels over introducing the national squeeze before Christmas, with Sir Keir swiping that 17,000 people had died since then and another million people been infected.

But Mr Johnson sounded a notably optimistic tone about the emerging impact of the restrictions.

Although he said the situation was ‘troubling’ and accepted the NHS was under huge pressure, the PM said that the country was ‘now starting to see the beginnings of some signs’ that the crackdown was having an effect in parts of the country. He stressed it was ‘early days’ and urged people to ‘keep their discipline’.

Tracy Black, director of CBI Scotland Director, said: ‘Following the First Minister’s announcement, businesses have a clear responsibility to help all employees who can work from home to do so.

‘Firms have worked relentlessly to keep their shops, offices and factories Covid secure.

‘Click and collect is a lifeline to many businesses, particularly smaller firms, as one of their few remaining revenue streams. When well organised, click and collect services instinctively feel like a safe way for firms to keep trading.

‘Of course, firms can choose to suspend click and collect if that makes sense for them, but for many others it could mean the difference between business survival or not.

‘It’s really important that the Scottish Government sets out compelling evidence that these services are a source of transmission and provides additional, urgent support to compensate for what would be a further loss of revenue in increasingly challenging times.’ 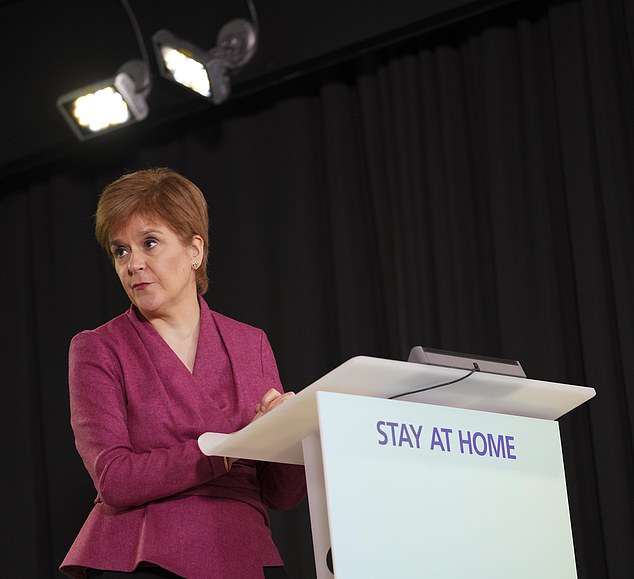 The Scottish First Minister said yesterday that bolstered restrictions are being looked at in a number of areas amid concerns people are still mixing too much in person.

She suggested takeaway restaurants could be instructed to change the way they serve customers to prevent mixing indoors while click and collect could be restricted to only essential services.

Ms Sturgeon has repeatedly beat Mr Johnson to the punch throughout the pandemic, often announcing policy shifts just hours or days before the PM.