Simon Cowell showed off his svelte frame as he pumped iron aboard a boat in Barbados on Wednesday, accompanied by his partner Lauren Silverman.

The X Factor mogul, 61, who has made an impressive recovery after breaking his back last year, worked on his health and fitness as he lifted weights while soaking up the sun.

Simon showed off his honed midriff after losing more than four stone on a vegan diet, as he worked on his biceps during his annual Caribbean break, while clad in a pair of blue and white patterned trunks. 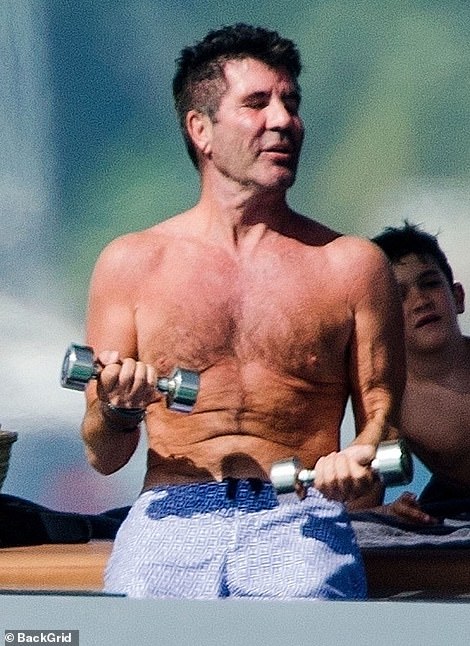 Looking good: Simon Cowell showed off his svelte frame as he pumped iron aboard a boat in Barbados on Wednesday, accompanied by his partner Lauren Silverman

Keeping himself occupied during the day, the BGT judge was also seen taking a quick phone call, chatting with friends and his son Eric, six, jetskiing and spending quality time with Lauren, 43.

Lauren showed off her incredible figure in a gorgeous navy and white polka dot bikini which revealed her ample cleavage and taut midriff.

The beauty also showcased her endless legs as she happily spent the day with loved ones. 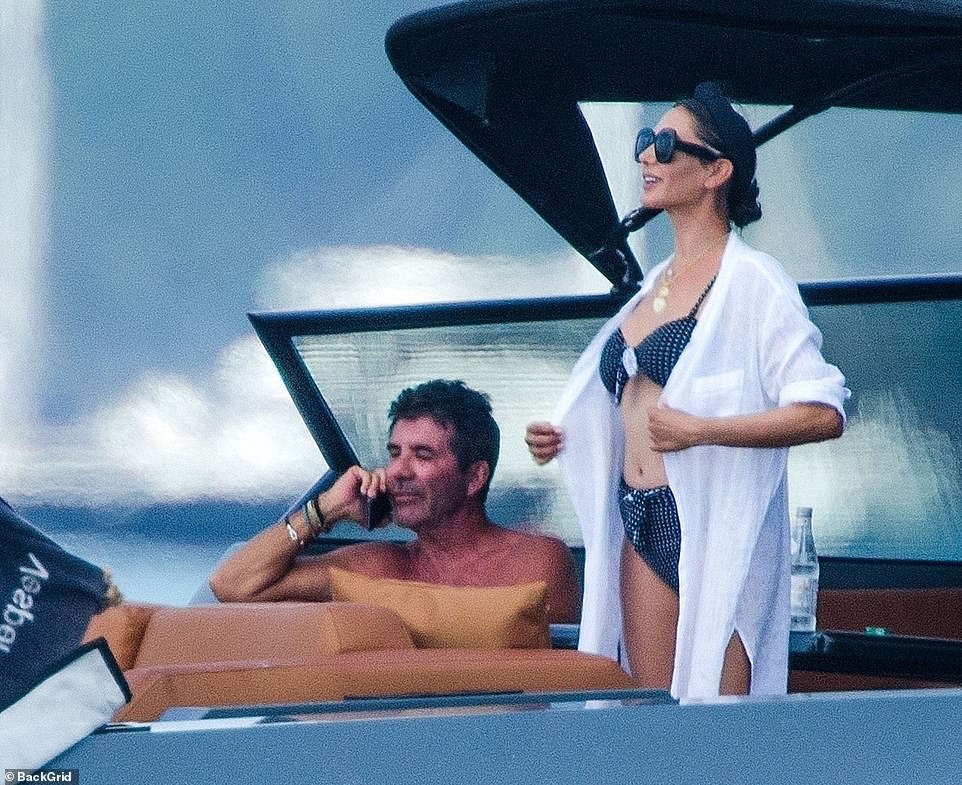 Wow: Simon’s partner Lauren, 43, showed off her incredible figure in a blue and white polka dot bikini as she relaxed on the boat 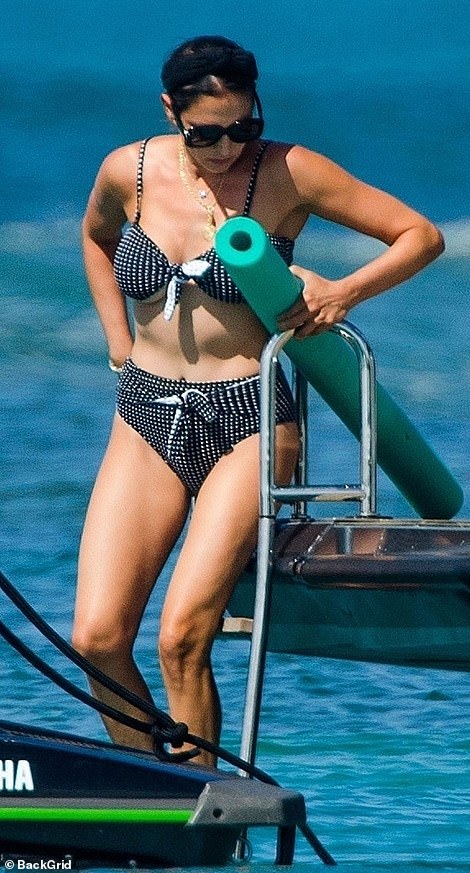 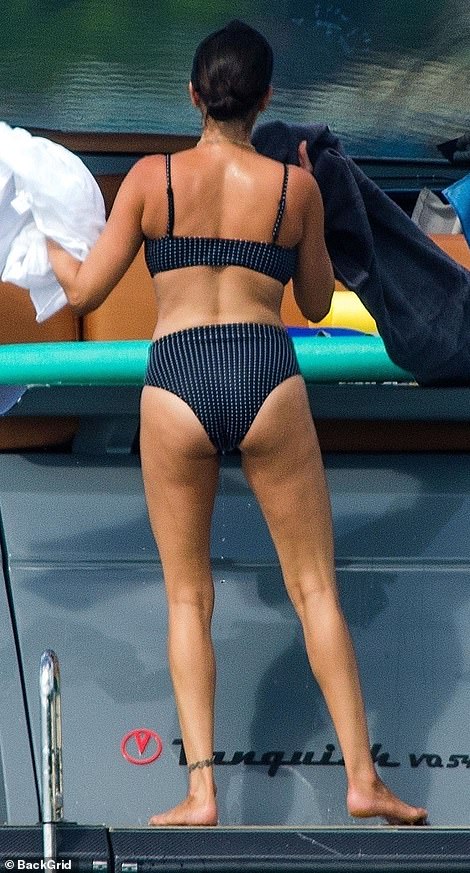 Toned: Lauren looked toned to perfection as she spent the day aboard the boat during her break 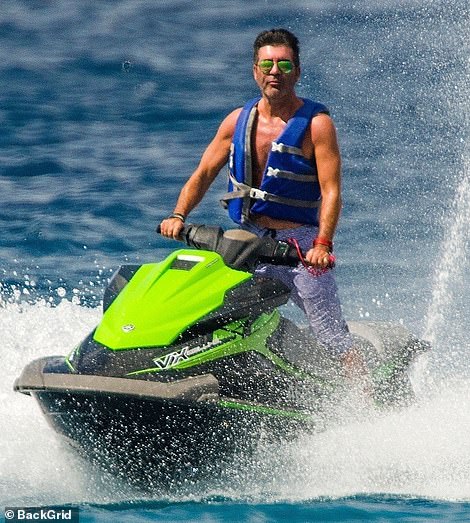 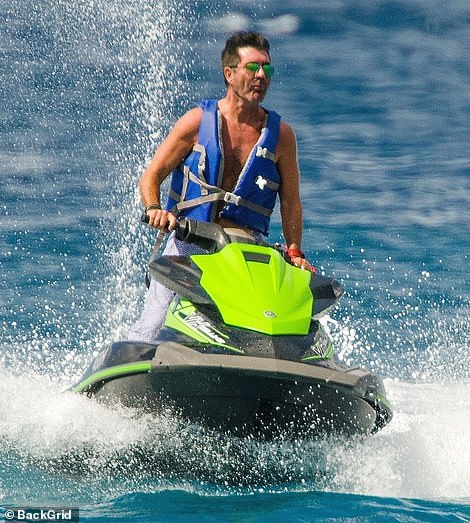 Off he goes: Simon zipped along on a jetski as he made the most of his time abroad

Lauren wore her brunette tresses in an elegant updo with a hairband and accessorised with chic shades and a white cover-up.

Simon is said to have made a full recovery from the broken back he sustained from a fall from his e-bike back in August,  and had planned to return to Britain’s Got Talent this year – however, the show has been scrapped amid the coronavirus pandemic.

In a statement, ITV said they’re hopeful the show will return later this year, but have delayed plans to start auditions later this month due to government restrictions. 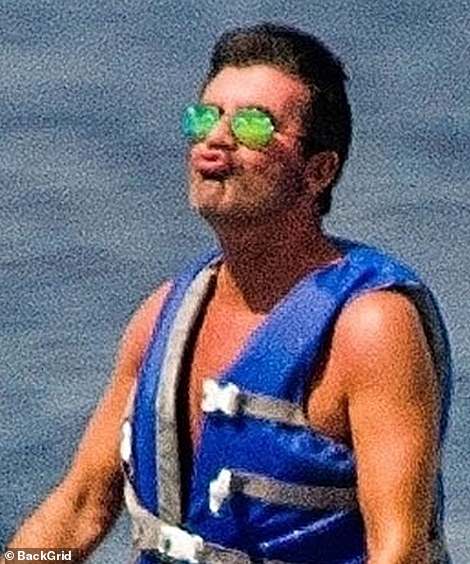 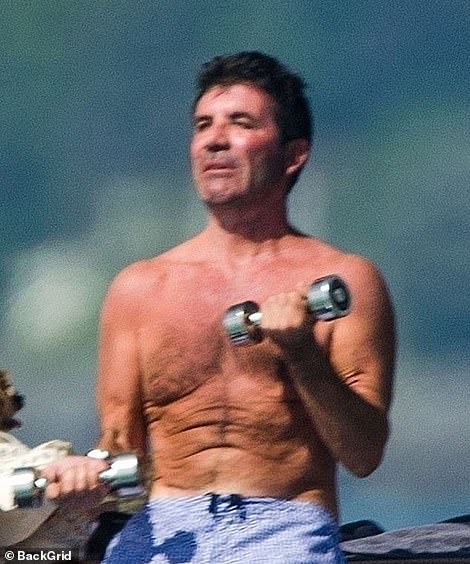 Animated: Simon playfully puckered up his lips after doing some weights aboard the boat

Smoke break: Lauren smoked a cigarette as she and Simon relaxed onboard the boat 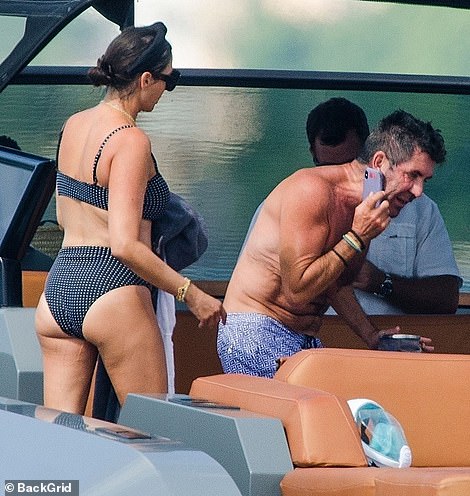 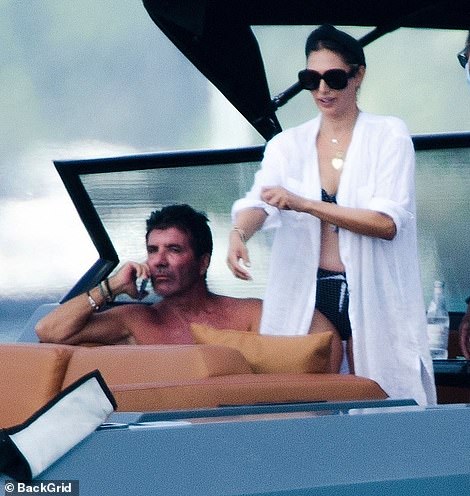 Couple: The happy couple were seen enjoying the day together aboard the boat as Simon took a quick call 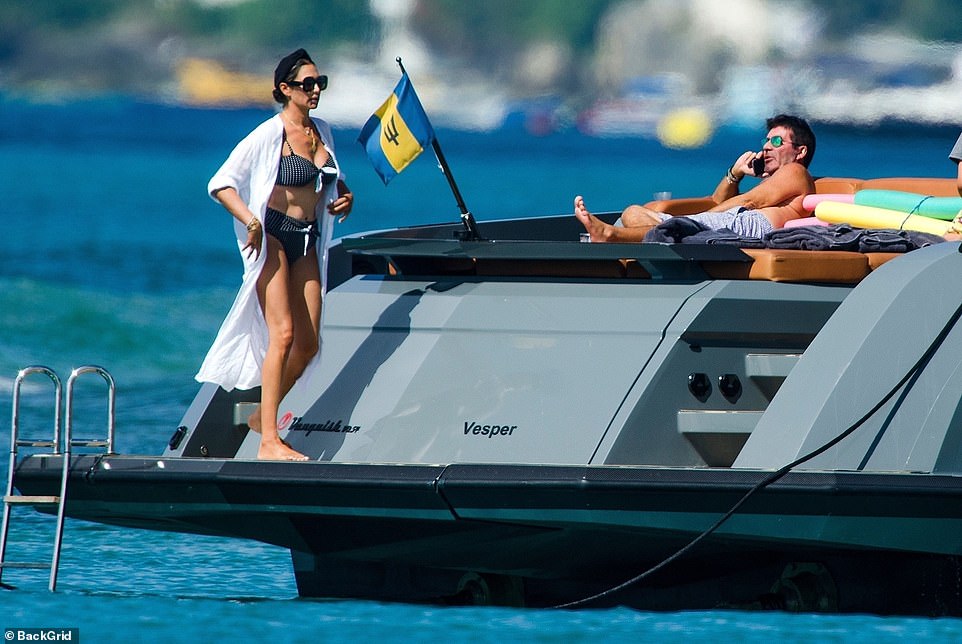 Basking: Simon soaked up the sun on the boat desk as Lauren showed off her incredible bikini body

They said: ‘The filming for the 15th series of Britain’s Got Talent has been postponed from its proposed record dates in late January.

‘With the announcement of the latest Government health guidelines and with our priority of safeguarding the well-being of everyone involved in our programmes we, together with the production teams at Thames and Syco, have taken the decision to move the record and broadcast of the forthcoming series.

‘We will confirm revised dates in due course.’

It had been reported that bosses decided to delay auditions as they would be unable to film auditions with a live audience during current restrictions. 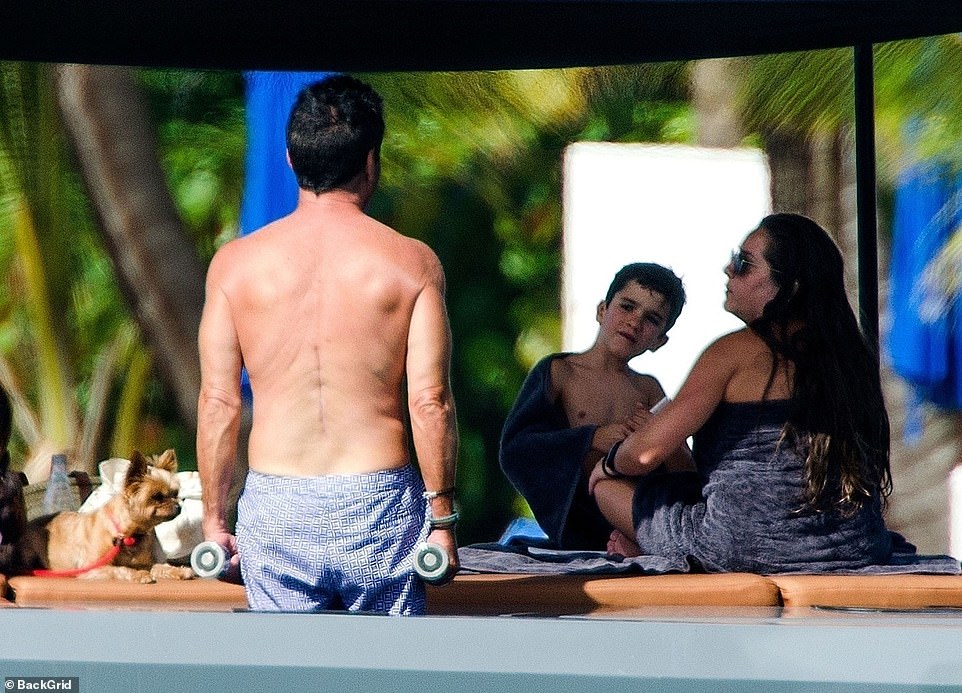 Family: Simon was seen chatting to his adorable son Eric as the family enjoyed the day at sea 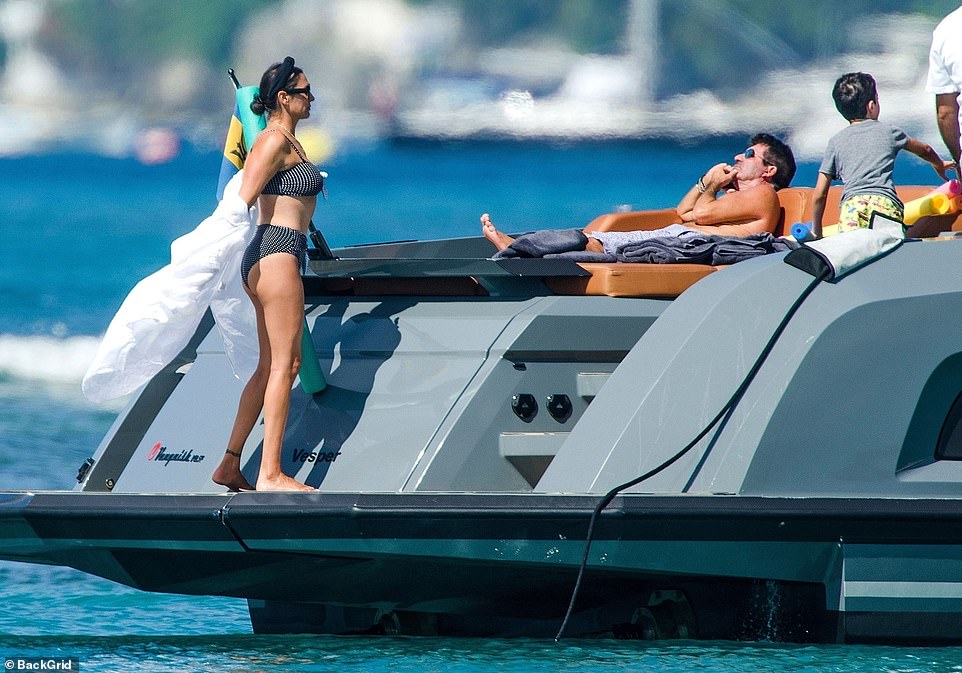 Looking good: Simon couldn’t take his eyes off Lauren as the pair soaked up the sun 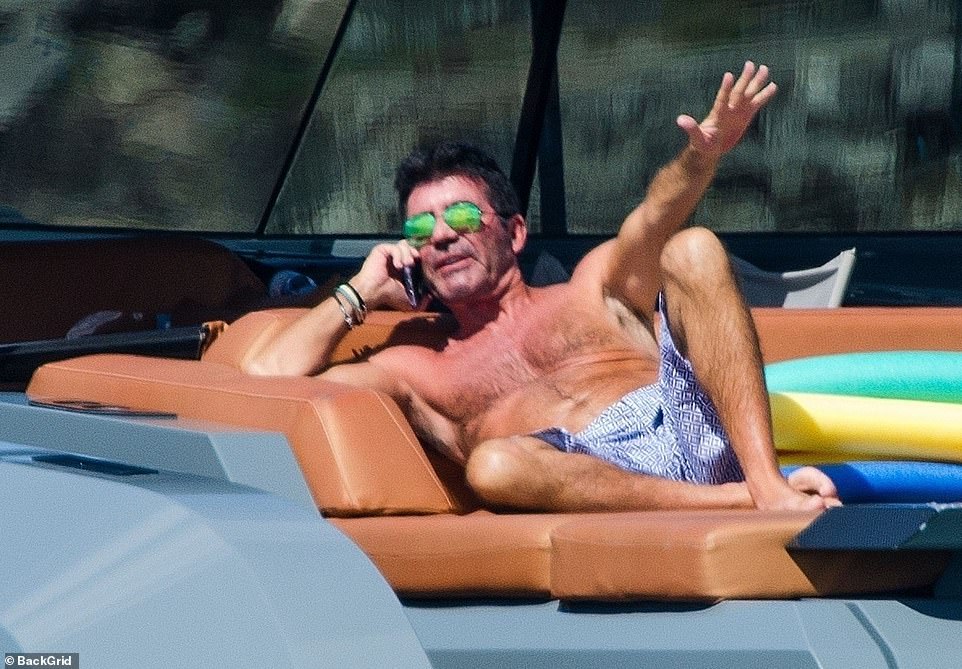 Call: Simon was seen taking a quick phone call as he slipped on some trendy mirrored shades

Sources also claimed that a vast production, with acts travelling from across the world to take part, wasn’t viable even though other TV productions have continued.

Musician Sinitta, 52, who once dated Simon, previously disclosed that he is now walking a gruelling five miles a day amid his continued recovery.

The singer told The Sun: ‘Simon has worked hard at his recovery and told me he’s walking 10,000 steps a day that’s around five miles – way more than he was before the accident. He’s got one of those watches that measures every step.’ 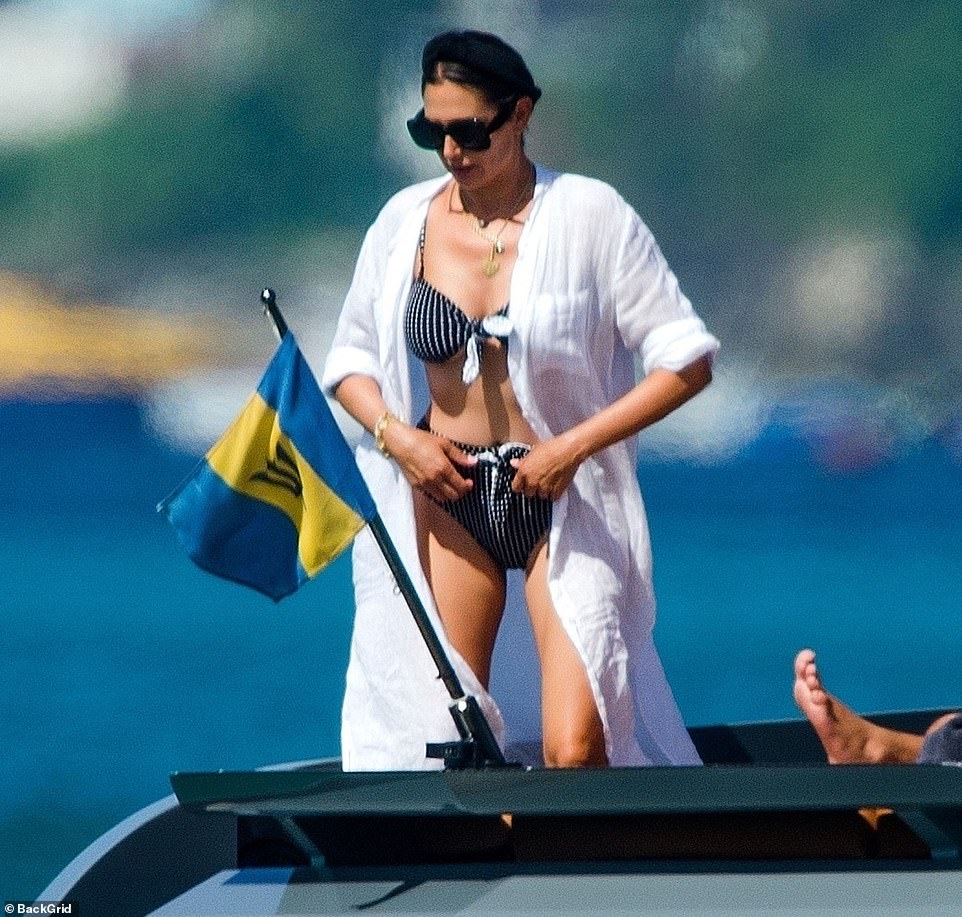 Stylish: Lauren looked every inch the bombshell as she relaxed onboard the boat in her bikini 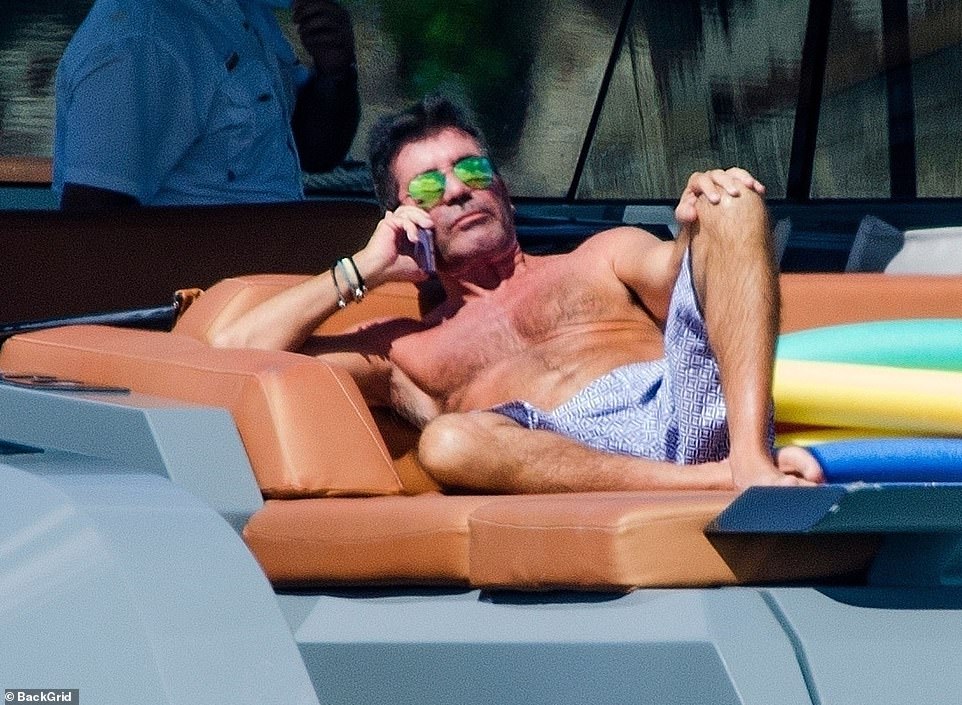 Kicking back: Simon enjoyed a rare break from his hectic schedule as he relaxed at sea with his family 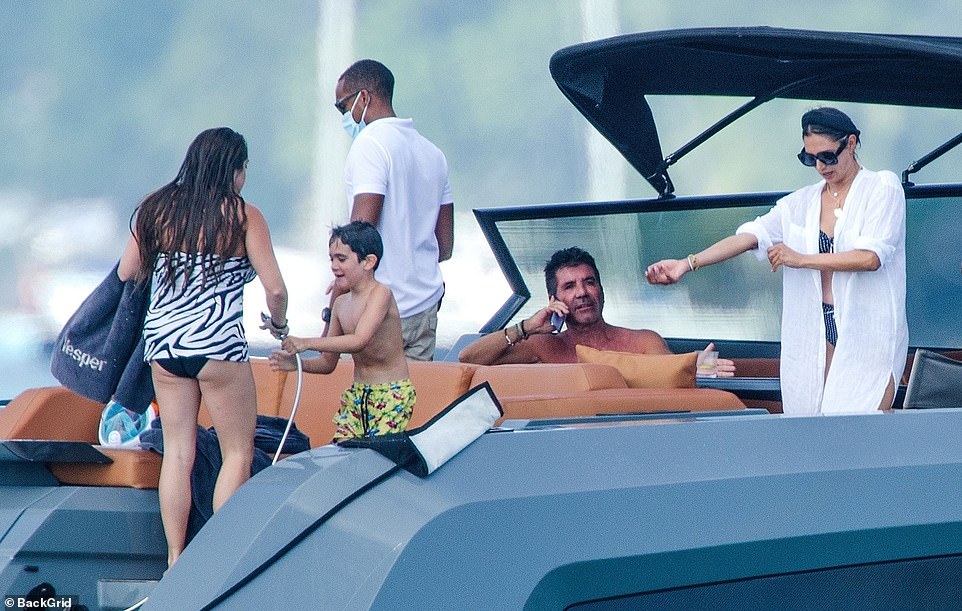 Beach break: Eric was seen having fun aboard the boat as his parents watched on in Barbados

Meanwhile, sources recently claimed the TV star was considering legal action against the manufacturers of his electric bike following his injury.

Simon and his team are said to be ‘weighing up’ their options and have been ‘pressing’ the manufacturers, Swindon Powertrain.

One lawyer claimed that a successful lawsuit could see Simon get up to £10million for medical bills and loss of earnings, the publication reported.

But a whistleblower from the manufacturers reportedly claimed the £20,000 electric bike an ‘accident waiting to happen’ due to Simon’s lack of training. 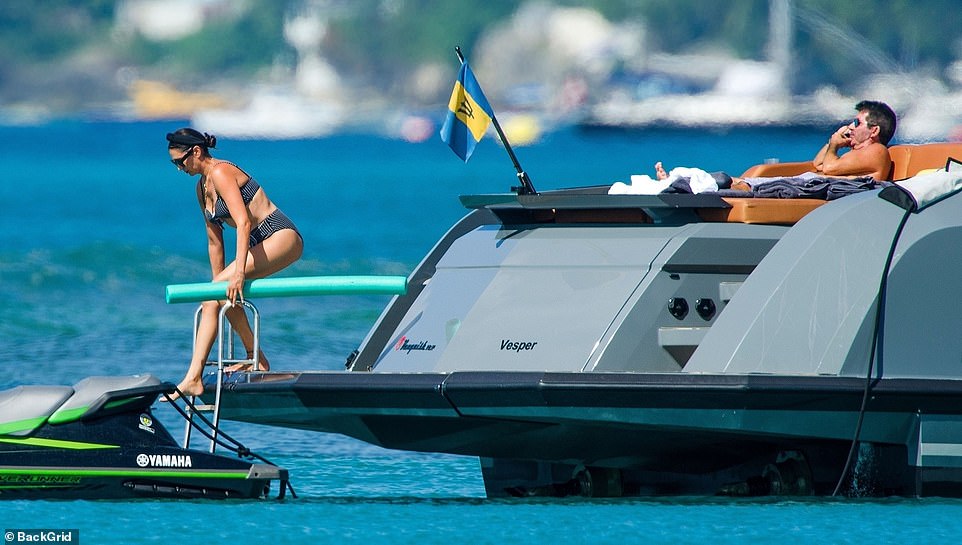 Glow: Lauren looked sensational in her bikini which showcased her lithe frame as she prepared to dive in 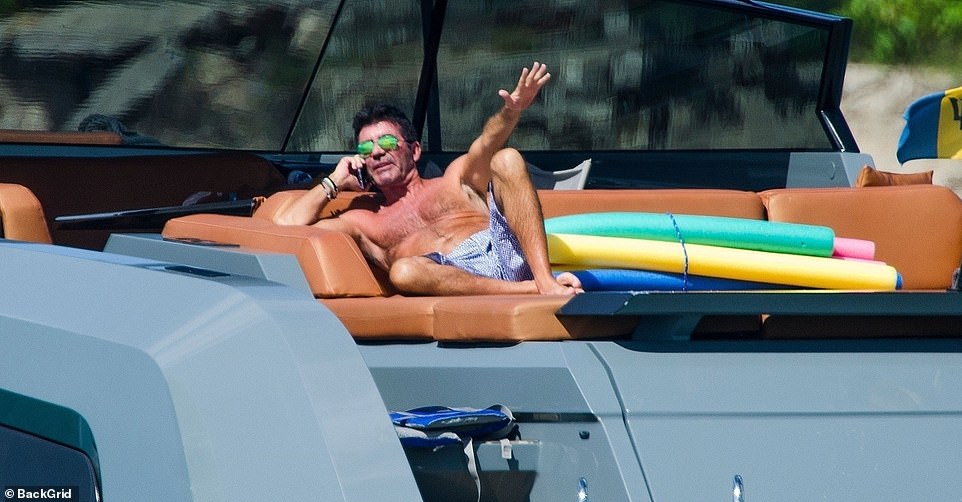 Chatty: Simon took a quick call as he relaxed on a luxurious seat aboard the boat 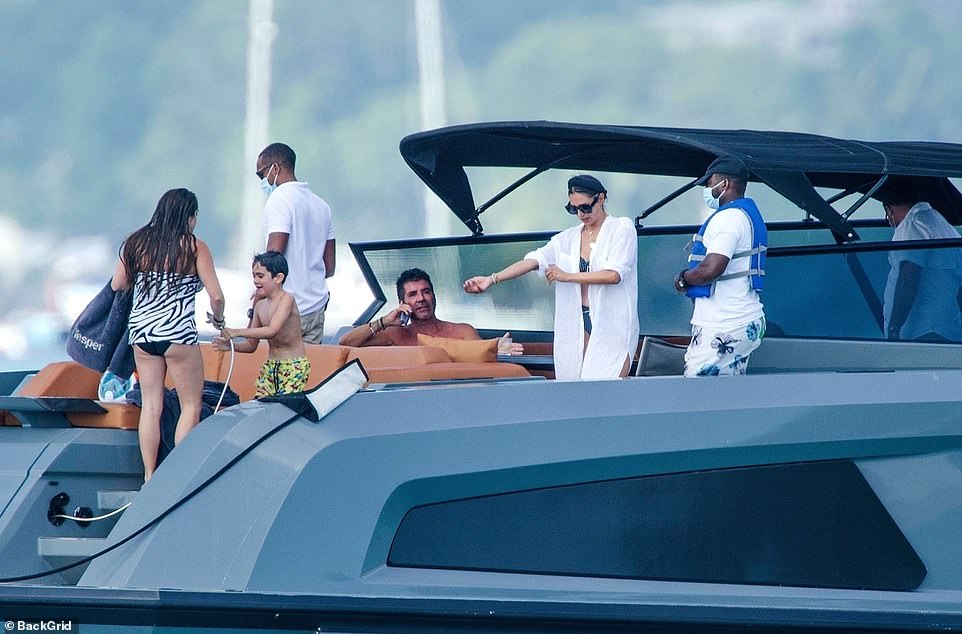 Conversation: Simon looked relaxed as she took a call aboard the boat while taking in the sights 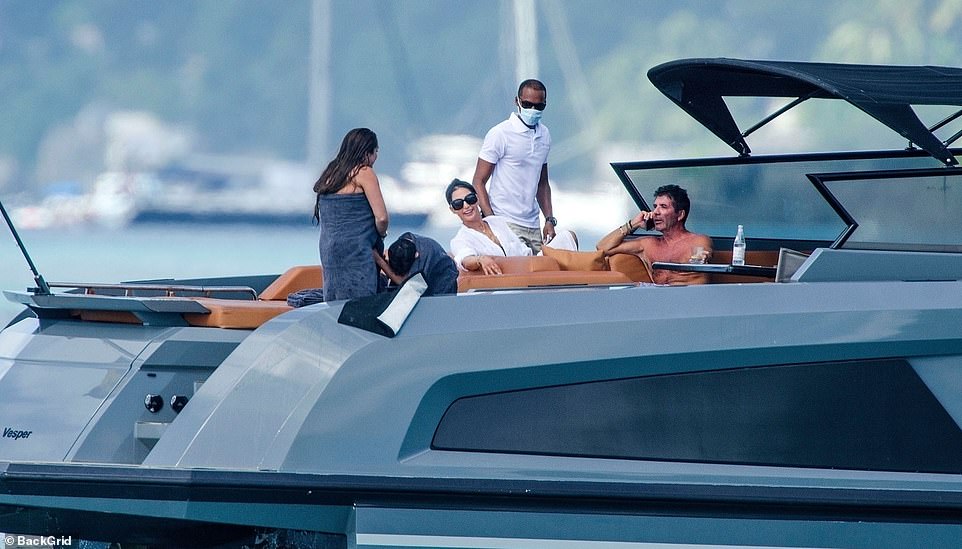 Smile: Lauren looked in great spirits as she relaxed with her family during their annual Barbados trip

They told the publication: ‘It should never have been sold to Simon without him being taught how to use it.’

The former employee claimed the Swind EB-01 bike, which can reach up to 60mph and is banned on public roads in the UK, should not be used without specialist training.

The source continued: ‘I said to my boss, “Are you showing Simon how to use this?” He said he was just dropping it off and I said, “Are you serious?”‘

A spokesperson for Simon told MailOnline: ‘Simon is understandably extremely concerned for other peoples’ safety in relation to this bike. 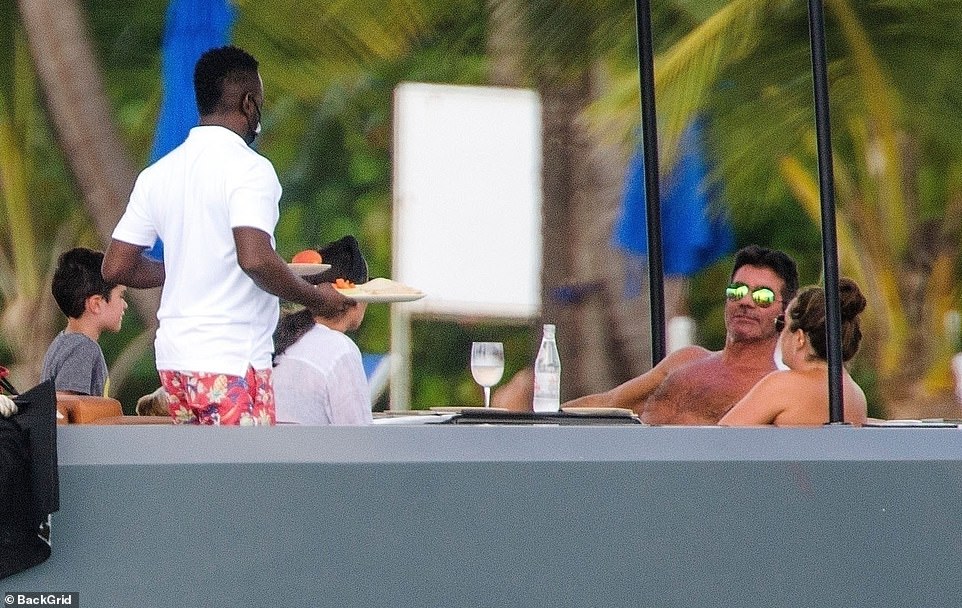 Snack time: The group looked happy as they enjoyed a brief spot of lunch aboard the boat 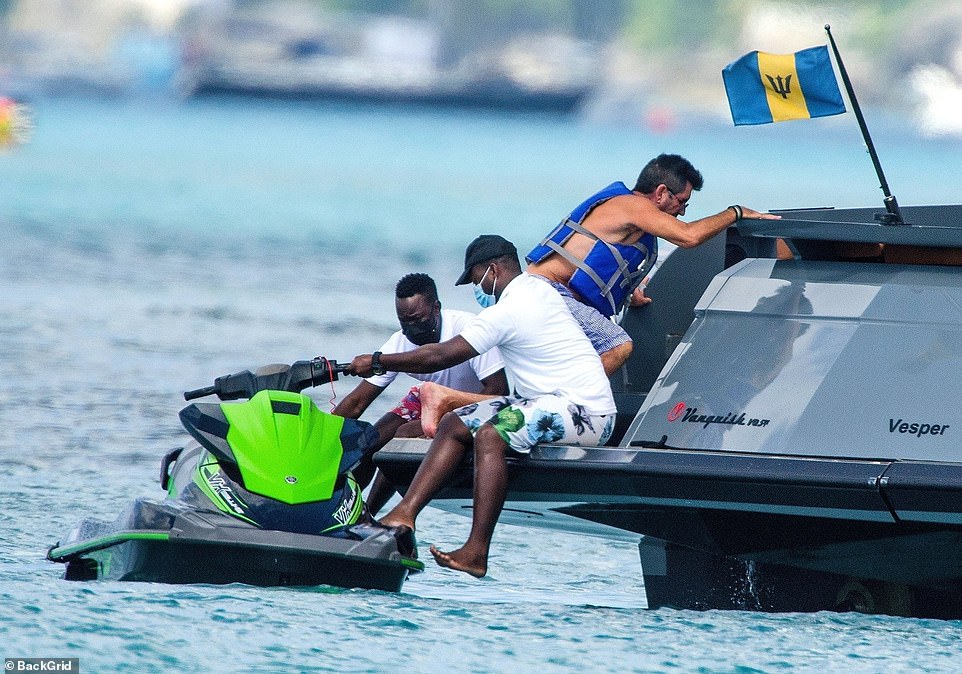 Back on the boat: Simon climbed back onto the boat after his jetskiing session in the sun

‘We have been pressing the manufacturers about this and will continue to press them, including in relation to the claims of the former member of staff.’

A spokesperson for Manufacturers Swindon Powertrain told MailOnline: ‘With any device, it is important to read the user manual before attempting to operate, acknowledged by Mr Cowell himself.

‘The EB-01 user manual includes a detailed process of how to familiarise oneself with the performance features and procedures to follow.’

They added that they are ‘in contact with Mr Cowell’s aides to progress this’, noting, ‘the company has acted in good faith at all times.’ 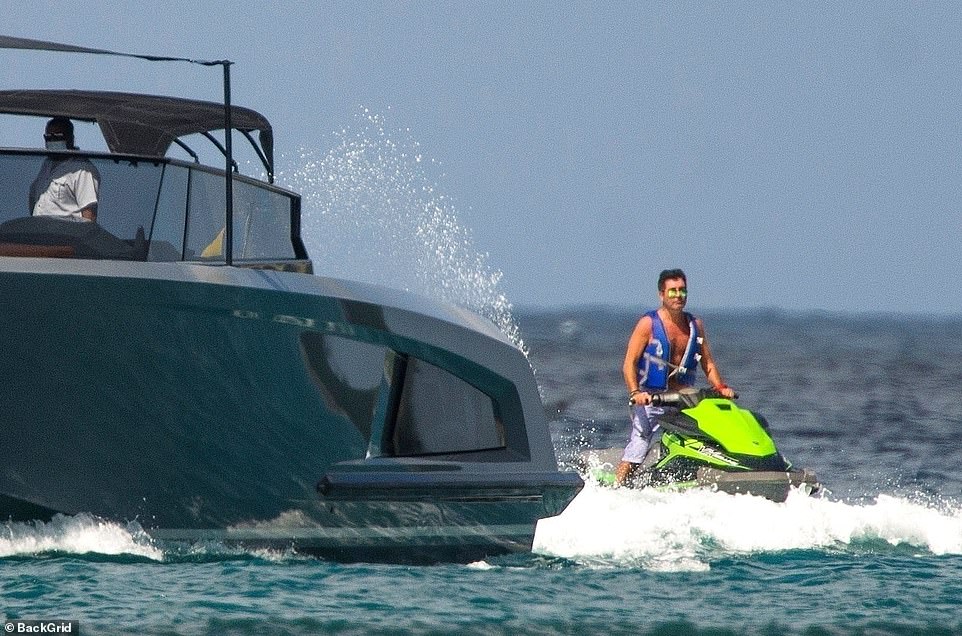 Making a splash: Simon looked cool and confident as he whizzed along his jetski before rejoining his loved ones 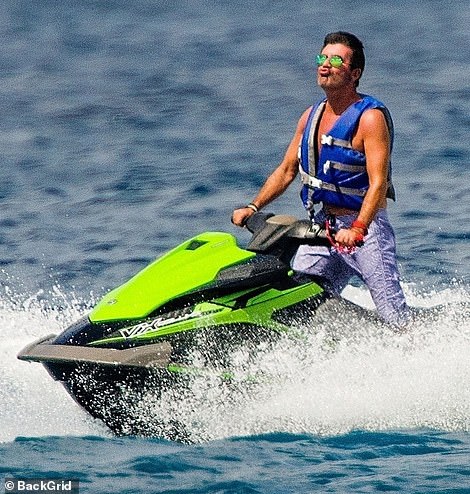 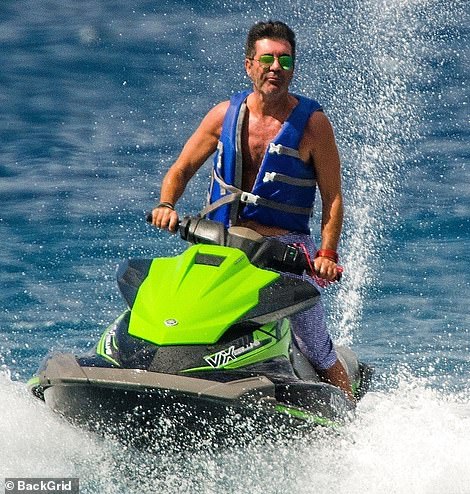 Soaking it up: The star looked in his element as he zipped through the waves on his jet ski