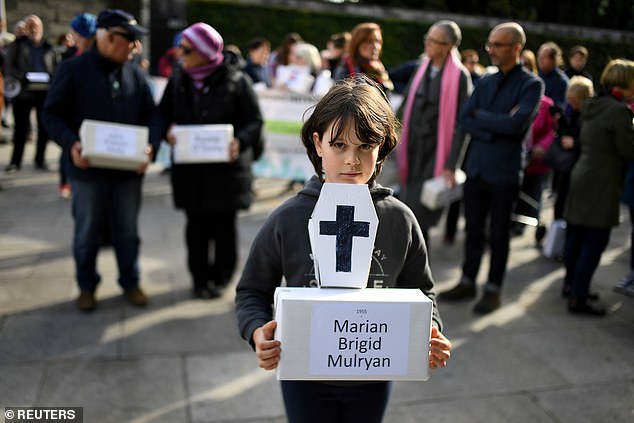 Irish campaigners have called for criminal consequences after a report found that 9,000 children had died in the country’s ‘mother and baby homes’ over more than seven decades – with churches now facing calls to pay reparations.

Lawmaker Brid Smith demanded ‘justice for the thousands of victims and survivors’ and called for a ‘full criminal investigation’ after the publication of the 2,865-page report into the homes for unmarried women and their illegitimate babies.

One survivors’ group said the report was a ‘cop-out’ and accused authorities of shifting the blame to misogynistic attitudes in Irish society at large rather than the churches and governments which ran the homes.

Irish premier Micheal Martin is among those calling for financial reparations from churches, saying it was ‘appropriate that there is a significant contribution from religious organisations’.

The Taoiseach is expected to offer a public apology in Dublin later today – but critics say the official acknowledgement is ‘not enough’. 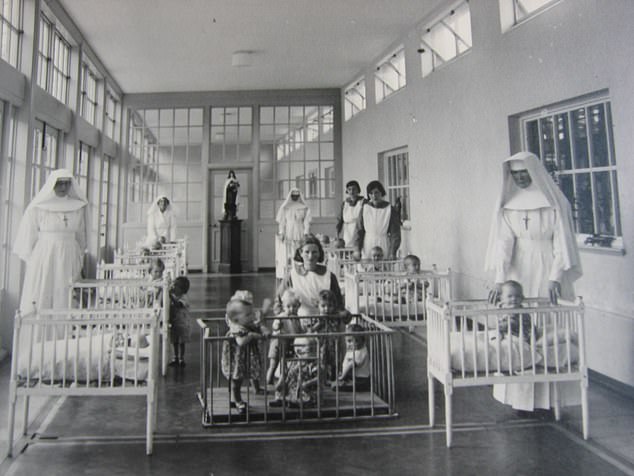 The Bessborough Mother and Baby Home was among those scrutinised by the report, which has been criticised as ‘incomplete’ by campaigners

Mr Martin said the report had been sent to Ireland’s director of public prosecutions to consider any criminal consequences that could arise from it.

But the long timespan covered by the report – which looked at the period from the foundation of the Irish state in 1922 until 1998 – means this may be difficult.

‘Obviously, there’s a length of time that has elapsed for quite a significant degree of the issues contained in the report,’ Mr Martin said.

‘But nonetheless, the Gardai can obviously pursue some of these issues and deal with the others.’

Breeda Murphy, a volunteer with a survivors’ group, told the Irish Examiner that it would take months to unpick the report’s findings.

‘I wish I could say it is a sense of relief but it’s not, it’s overwhelming in the darkness that we hoped would lift,’ she said.

Another group, the Coalition of Mother And Baby Home Survivors, said the report was ‘truly shocking’ but ‘fundamentally incomplete’.

The group said it was a ‘cop out’ to blame what happened on the prevailing social attitudes at the time, saying the government and church should be held responsible.

Mr Martin had said that the report ‘opens a window onto a deeply misogynistic culture in Ireland over several decades’.

‘What has been described in this report wasn’t imposed on us by any foreign power. We did this to ourselves, as a society,’ he said.

‘We had a completely warped attitude to sexuality and intimacy, and young mothers and their sons and daughters were forced to pay a terrible price for that dysfunction.’ 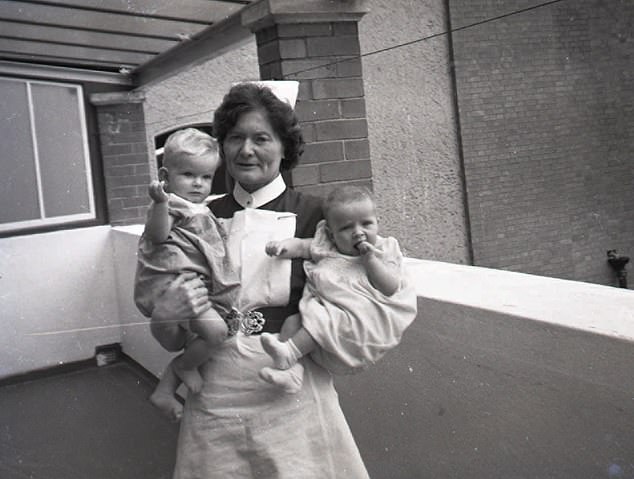 An archive photo from a Dublin ‘mother and baby home’, an institution which Irish premier Micheal Martin said was a product of misogynistic attitudes at the time 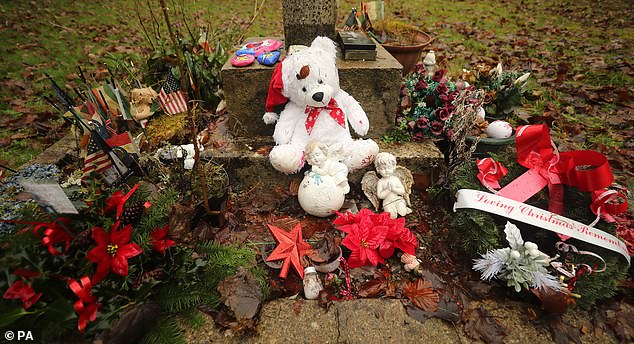 An infants’ graveyard at Sean Ross Abbey in Tipperary, at the site of a mother and baby home which was operated by a religious order from 1930 to 1970

Another group, Irish First Mothers, said the report ‘absolved both the Church and state of any systemic responsibility for what it admits is the effective incarceration of pregnant mothers’.

Politician Brid Smith said a state apology was ‘just not good enough’ and called for the institutions responsible to have their assets seized to help survivors.

‘We’ve heard apologies many times before, but what’s needed now is action,’ she said.

‘There are tens of thousands of babies that were abused, and there are thousands and thousands whose bodies are lying in the grounds of institutions all over this country,’ she said.

‘Something went horribly and criminally wrong, and that needs to be investigated,’ she said.

Amnesty International has also called for a criminal probe, saying it was ‘the state, not wider society, that was primarily responsible’ for the abuses.

‘The level of infant mortality in these institutions compared to wider society at the time and the number of unregistered deaths and burials are shocking to the extreme,’ the charity said

‘We support calls for this, and other serious abuses, to be referred for criminal investigation.’

The Commission of Investigation into Mother and Baby Homes (CIMBH) found ‘disquieting’ levels of infant mortality at the institutions, which operated as recently as 1998.

Children born in the institutions would often be separated from their mothers and put up for adoption, severing all family ties. 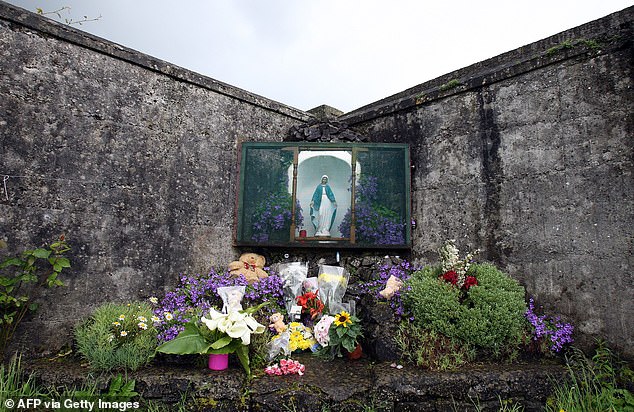 A shrine in Tuam, County Galway, which was put up in memory of up to 800 children who were apparently buried at the former home for unmarried mothers

The report said that many women had suffered ’emotional abuse’ at the homes, with some evidence of physical abuse.

‘It appears that there was little kindness shown to them and this was particularly the case when they were giving birth,’ the report said.

‘The large institutions were regimented and they were inadequately staffed until the later decades. The atmosphere appears to have been cold and seemingly uncaring.’

Studying the homes over a 76-year period through 1998, the CIMBH determined that 9,000 children died in them, or 15 percent of those who passed through.

The report says 56,000 unmarried mothers and 57,000 children passed through the homes examined.

Many of the women received little or no ante-natal care.

The report gave no single explanation for the deaths, but said ‘the major identifiable causes… were respiratory infections and gastroenteritis.’

It also highlighted a total of seven unethical vaccine trials on children in the institutions between 1934 and 1973.

Meanwhile women of the period who gave birth outside marriage were ‘subject to particularly harsh treatment’ at the hands of families and partners.

The CIMBH was established in 2015, after an amateur historian uncovered evidence of a potential mass grave of infants at one such home in the town of Tuam.