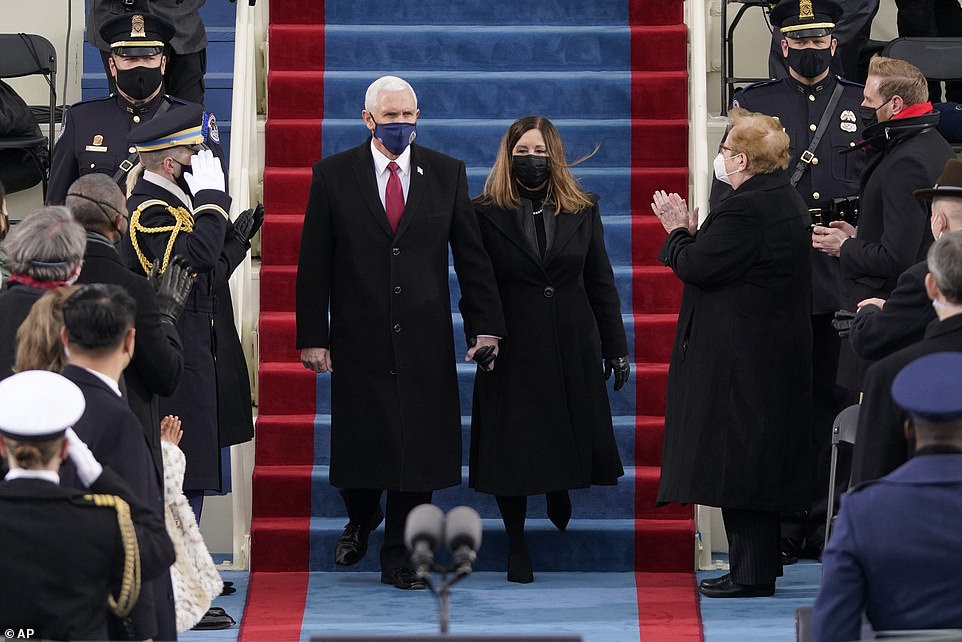 Mike Pence did what Donald Trump refused to do Wednesday, attending Joe Biden’s inauguration and setting a new tone for his own political future.

Trump’s VP’s ugly public split with Trump was put on full display as he returned to the Capitol where two weeks ago a baying MAGA mob chanted: ‘Hang Mike Pence.’

Trump and Pence are only known to have spoken once since the January 6 riot but the outgoing president tried to make some gesture of public reconciliation on Wednesday morning as he thanked Pence for his service during his farewell speech at Joint Base Andrews.

‘I want to just, in leaving, thank our Vice President Mike Pence and Karen,’ Trump said to a crowd of his supporters.

Pence was not there to witness it however, and instead he went with his wife Karen to the Capitol about an hour after Trump spoke.

He set a glaringly different tone to his former boss: saluted as he walked in hand-in-hand with second lady Karen, he spoke to Kamala Harris, his successor, and to a list of Trump’s enemies: he chatted with Nancy Pelosi and greeted George W. Bush.

The display of civility and respect for the transfer of power puts Pence’s future sharply in focus.

With a shattered Republican party deeply divided by Trump’s desperate campaign to overthrow the election and now his second impeachment, Pence’s presence at the inauguration after years of deep loyalty to Trump may let him straddle both wings. 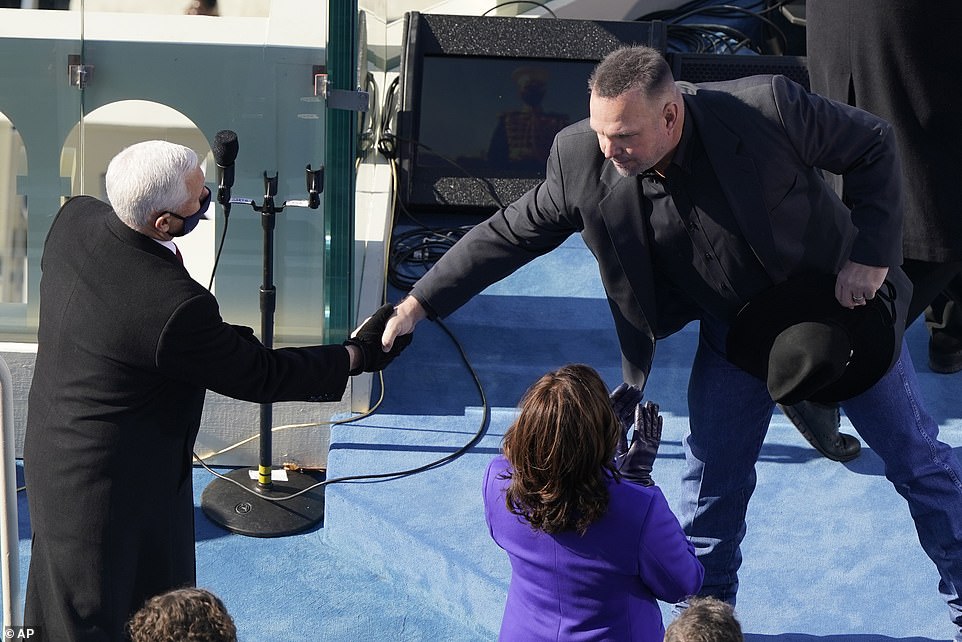 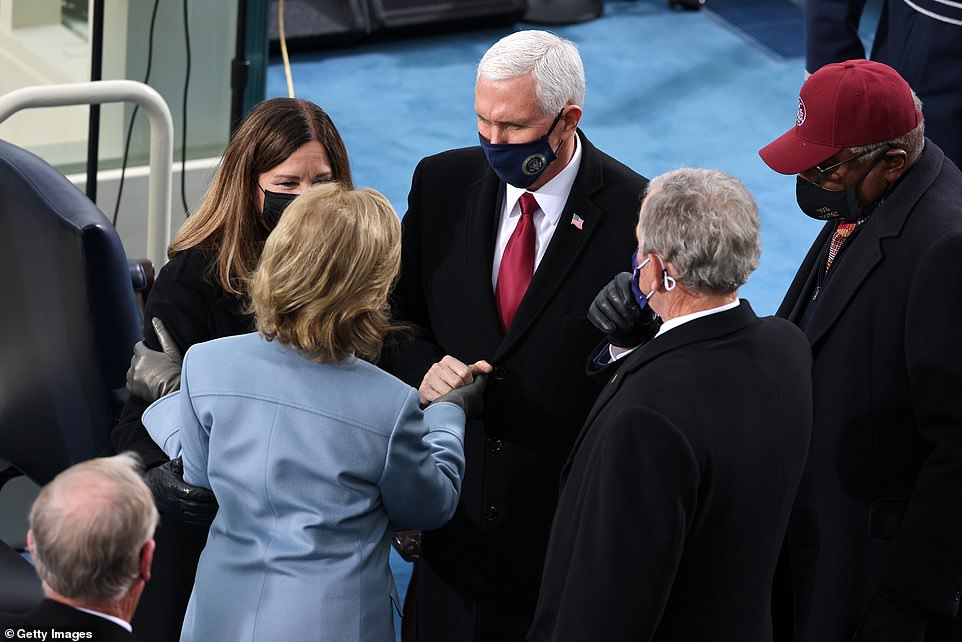 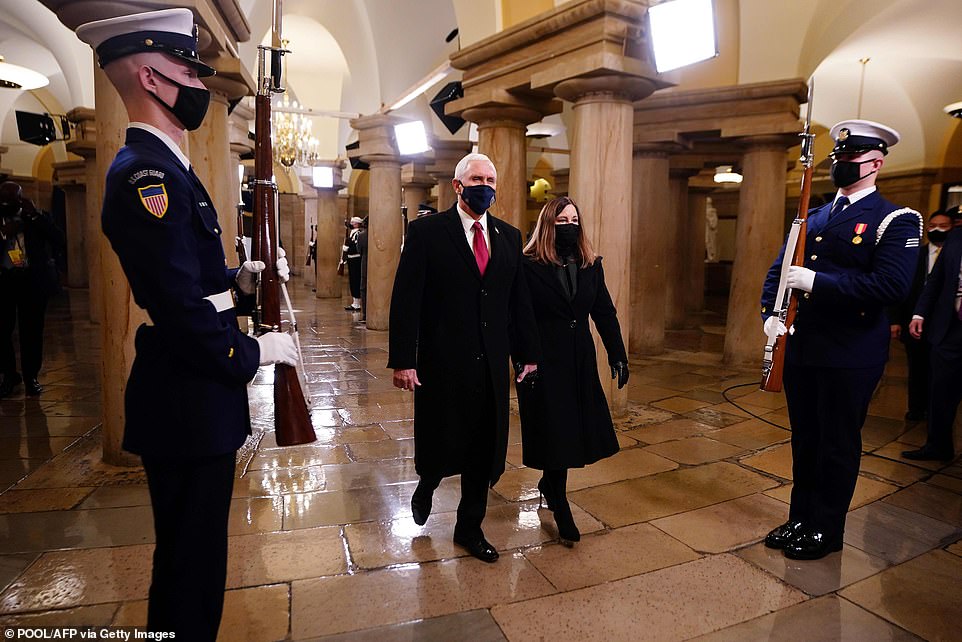 Pence, in his final moments as vice president, walks through the Capitol with his wife Karen as they arrived at the inauguration of Biden as the 46th President of the United States 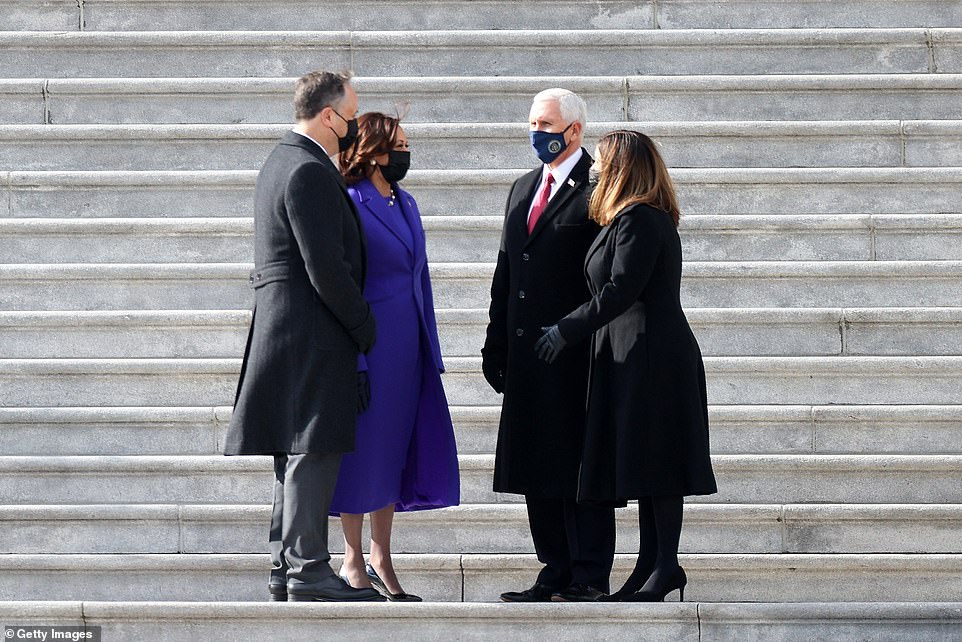 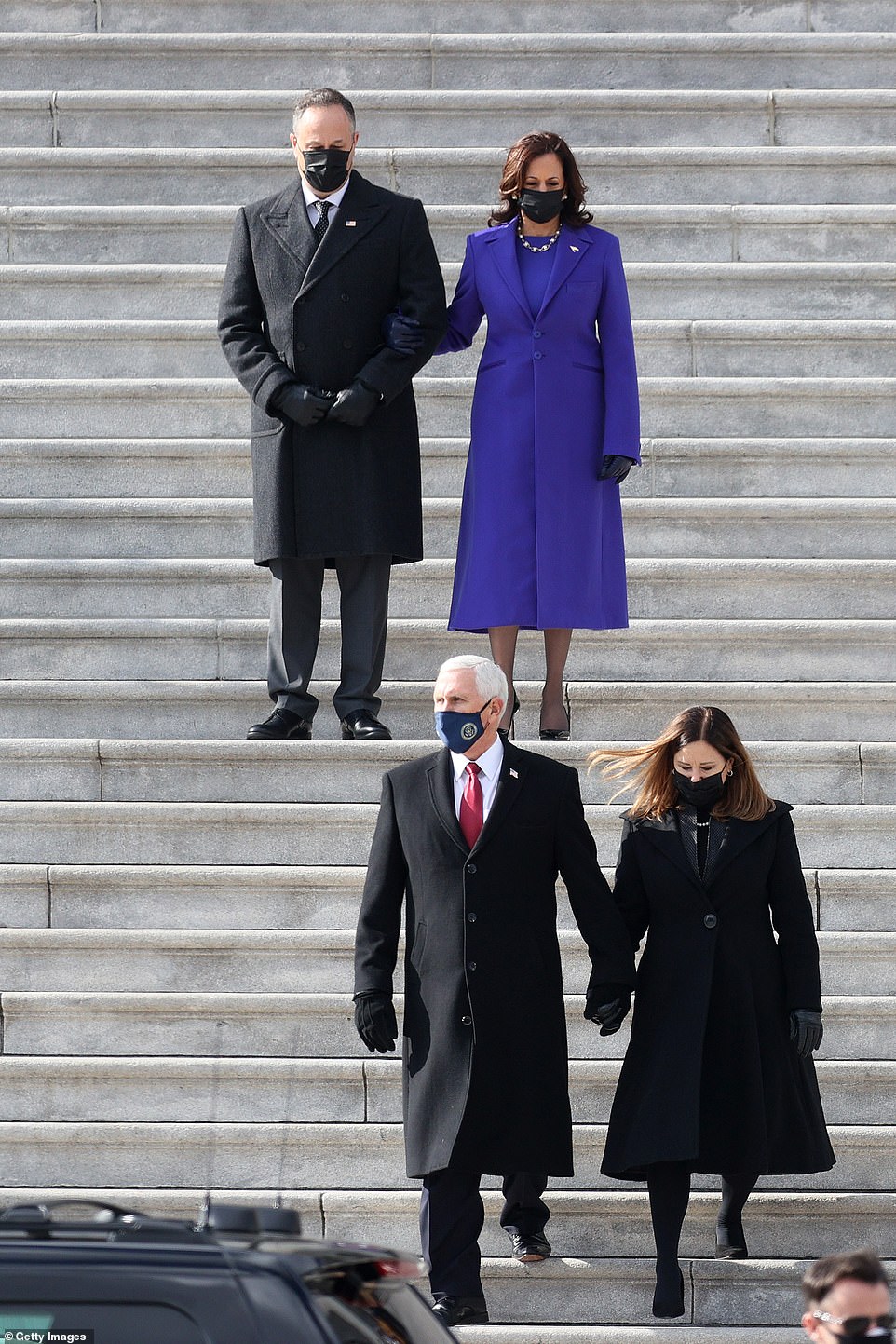 Despite wearing masks, it’s obvious Harris and Emhoff were all smiles as they sent off the former vice president and second lady 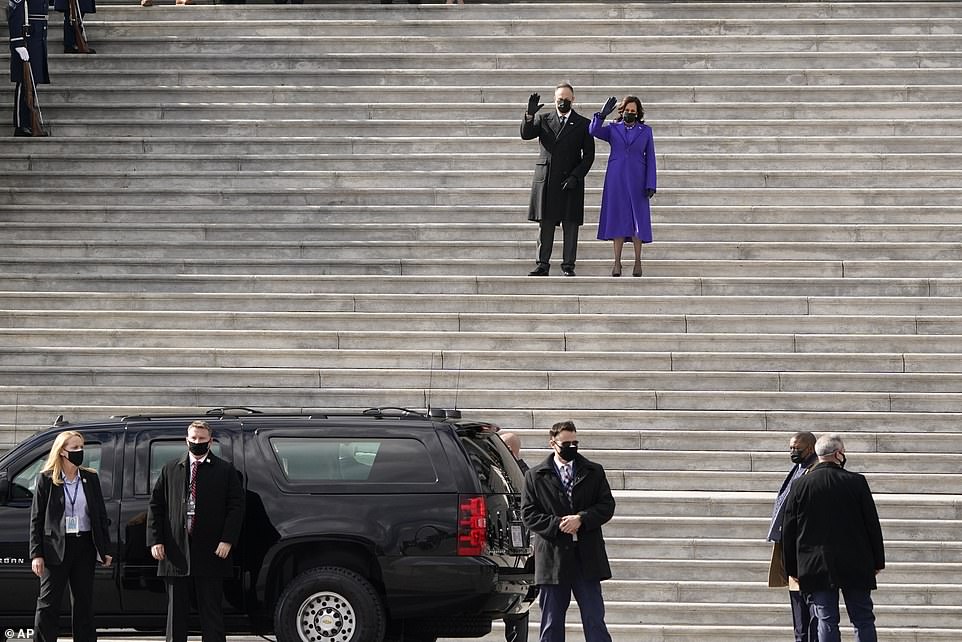 The couple waved goodbye to Mike and Karen Pence as they depart Washington, D.C.

Trump has been outraged with his vice president since the election, claiming he did not do enough to help overturn the results. He also falsely claimed Pence, as president of the Senate, could do something in Congress to stop them from certifying the Electoral College outcome. 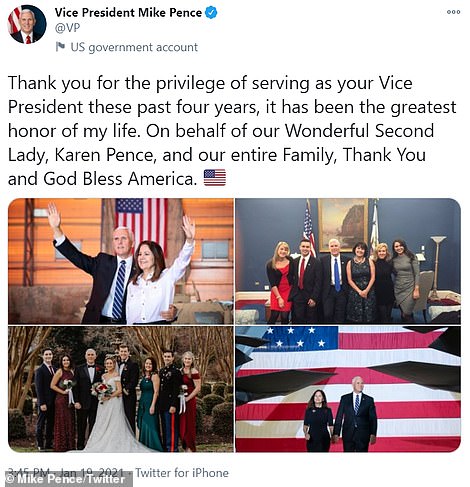 Pence posted a farewell tweet Tuesday evening and reposted Wednesday morning with images of his time as vice president – none of the four pictures included one of him with Donald Trump, only those with his wife and his children

Despite the reported bitterness between the two leaders, the Washington Post reported Trump and Pence met in person Thursday and spoke on the phone on Friday – five days before the end of their term together.

On Tuesday evening, Pence sent a farewell tweet, including four pictures of his time in office – none including images of him with President Trump.

‘Thank you for the privilege of serving as your Vice President these past four years, it has been the greatest honor of my life,’ Pence tweeted and reposted Wednesday morning.

‘On behalf of our Wonderful Second Lady, Karen Pence, and our entire Family, Thank You and God Bless America,’ he continued with an emoji of an American flag.

He posted two images with his family and two others with his wife, Karen Pence.

Trump made final remarks as president before leaving Washington, D.C. for Palm Beach, Florida on Air Force One Wednesday morning with his family. 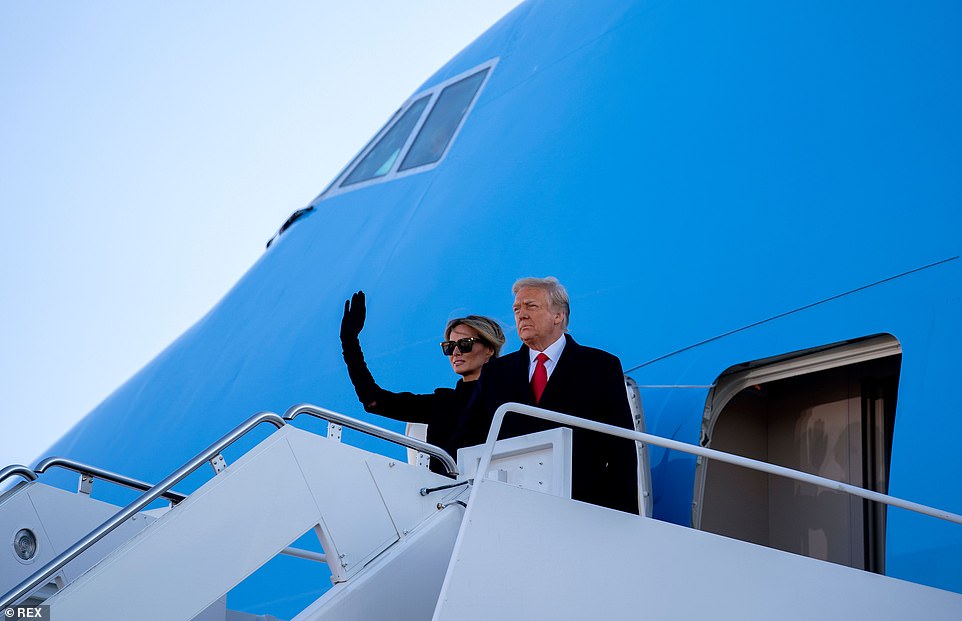 Donald and Melania Trump departed Washington, D.C. Wednesday morning and landed in Palm Beach at the same moment Biden’s inauguration ceremony kicked off. Pence was not present at the remarks where Trump thanks his No. 2 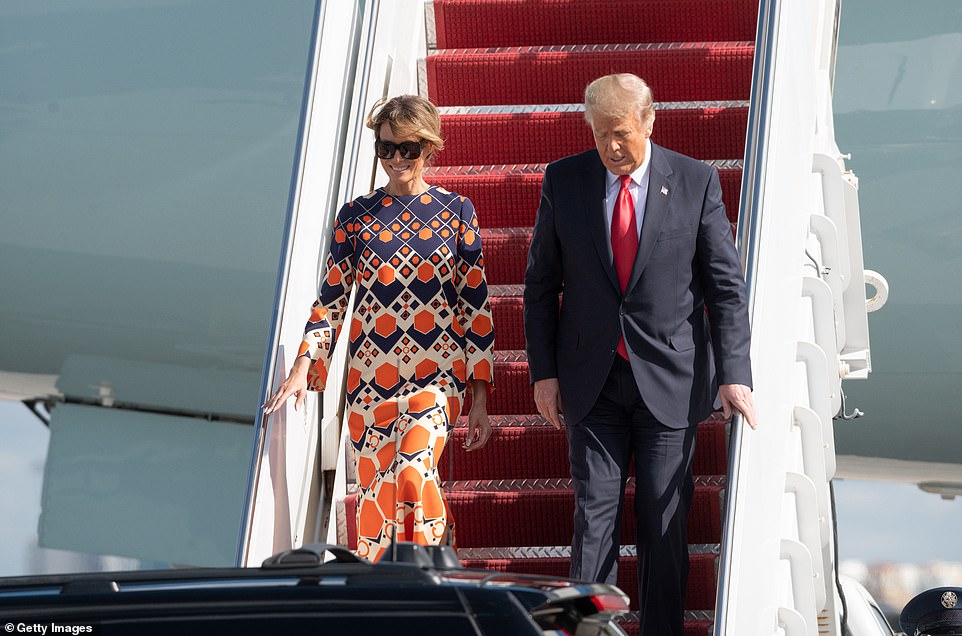 ‘I want to just, in leaving, thank our Vice President Mike pence and Karen, Trump said to a crowd of his supporters gathered on the tarmac at Joint Base Andrews.

He also extended his thanks to Congress and promised to ‘be back in some form’ before boarding Air Force One one final time.

‘Have a good life, we will see you soon,’ he said.

Pence was not present at the speech because, his spokespeople claim, it would not be logistically possible to attend both the outgoing president’s remarks and incoming president’s swearing-in.

Former Presidents Barack Obama, George W. Bush and Bill Clinton – along with their respective spouses – attended the inauguration. Jimmy Carter, 96, the other remaining living president, decided not to attend in the midst of a deadly pandemic.

In the absence of a meeting with his predecessor Wednesday morning, Biden attended mass at a church in Washington, D.C.