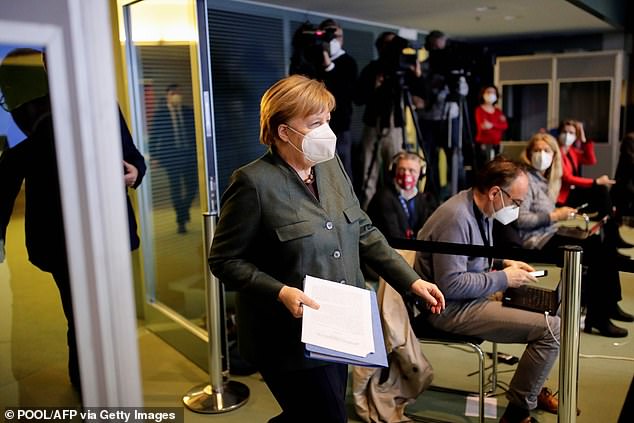 Another mutant strain of coronavirus – different to those originating in the UK, South Africa and Brazil – has been discovered in Germany.

Health officials said the variant was identified in Bavarian hospital patients, but it isn’t yet known how transmissible it is.

Concerns have grown in recent weeks over the spread of the variants, the UK-based version of which forced Boris Johnson to cancel Christmas for millions and plunge the nation into a third national lockdown.

Discovery of the new German strain has also seen Angela Merkel take action, with the Chancellor declaring restrictions including the closure of schools and shops will be extended until mid-February.

Germany’s infection rate has stabilised in recent days, indicating that existing restrictions may have been effective in bringing down the numbers.

However, fears are growing after it was found that out of 73 newly infected people at Garmisch-Partenkirchen, in the southeast of the country, 35 had the new variation.

Discovery of the new German strain has also seen Angela Merkel take action, with the Chancellor declaring restrictions including the closure of schools and shops will be extended until mid-February

Experts continue to analyse samples after Clemens Stockklausner, deputy medical director at the Charité university hospital in Berlin, admitted it was too early to say whether this virus was more deadly than other variants.

He said: ‘At the moment we have discovered a small point mutation… and it is absolutely not clear whether it will be of clinical relevance.

‘We have to wait for the complete sequencing.’

On Tuesday, the country’s disease control center reported 11,369 newly confirmed infections and 989 deaths, for an overall death toll of 47,622.

Merkel, noting the British link between surging infections and the appearance of a more contagious variant, told reporters in Berlin: ‘All our efforts to contain the spread of the virus face a serious threat.

‘Now is the time to guard against the danger posed by this mutated virus.’

While individual instances of new variants have been found in Germany, scientists have said it isn’t dominant yet, she added.

‘There’s still time, so to speak, to contain the risk,’ said Merkel.

However, the Chancellor added that Germany may need to consider border crossing curbs if other European countries do not act to half the spread of the virus.

‘We can do anything we like, but we will not succeed if others are not working in parallel,’ Merkel told journalists on Tuesday, two days ahead of a video conference of European leaders. 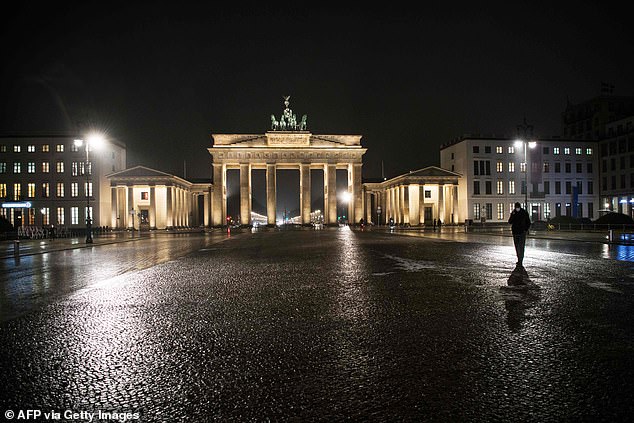 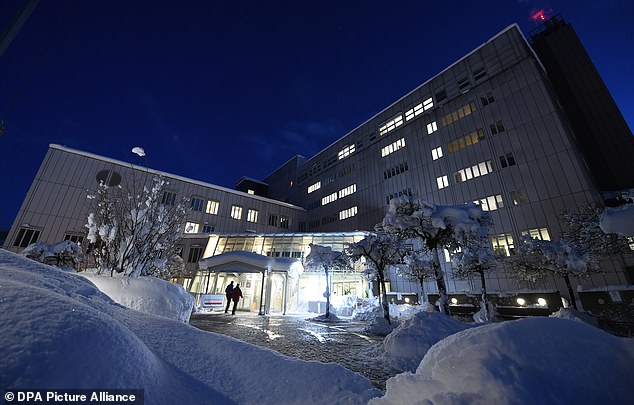 Snow lies in front of the entrance to the Garmisch-Partenkirchen hospital, where a possibly new variant of the coronavirus has been discovered

‘We need to make sure that everyone around us is doing the same. Otherwise we have to look at measures such as entry restrictions.’

Her comments came after she and leaders of Germany’s 16 states agreed to extend lockdown for most schools and shops for another two weeks until February 14.

New infections have been falling in recent days and pressure on intensive care units has eased slightly, but virologists, pointing to the situation in Britain, with Europe’s highest COVID-19 death toll, warn the mutants could undo all progress.

Germany shares borders with nine countries, and there are growing concerns about infection rates in some of them, including Czech Republic, where commuter traffic is heavy.

Most schools will remain closed, despite opposition, given evidence that some new variants are more transmissible among children, Merkel said.

‘If we had a situation like London, then we wouldn’t be talking about schools anymore but about ambulances and overflowing hospitals,’ she said.

Medical masks, and not simple cotton ones, will be made mandatory on public transportation and in stores, and companies must let employees work from home until March 15 where possible.

Aid for hard-hit companies is to be improved, and retailers’ writedowns on seasonal goods – which could include winter coats or ski equipment – will be taken into account.

A waiver on insolvency filings for firms hit by the coronavirus crisis will be extended until the end of April.

The provision, which had been due to expire at the end of the month, has helped contain bankruptcies in Europe’s largest economy. 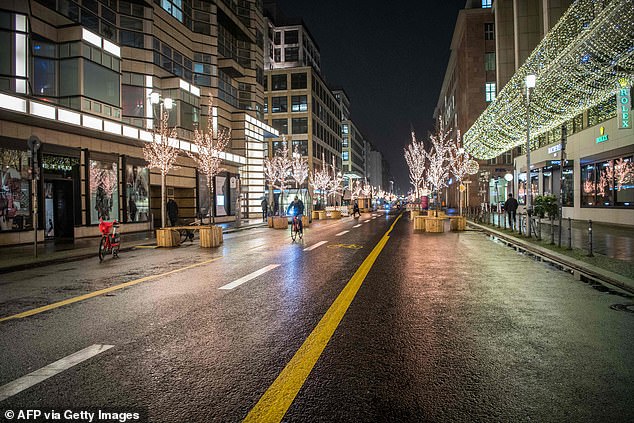 The governor of the eastern state of Saxony, which until recently had the highest rates of infection in the country, echoed Merkel’s comments on the importance of driving the number of new cases down further.

‘We’re currently seeing in Britain what happens when a mutation occurs, when the numbers explode,’ he told news channel n-tv. ‘We can’t remain at this level.’

Medical workers have been demanding an extension or toughening of the shutdown since many hospitals are still on edge, with intensive care wards and even crematoriums reaching their limits in some areas.

‘The current measures on limiting social contacts seem to be showing an effect,’ Susanne Johna, the head of the physicians’ association Marburger Bund, told the dpa news agency, adding that the measures should continue to be upheld to further reduce new infections.