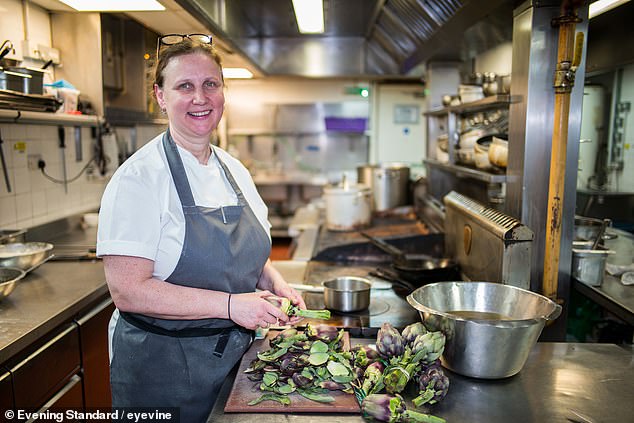 What’s a kitchen whiz to do when Covid closes her restaurants? In Angela’s case, it’s whisk up 1,000 meals a day for NHS workers, as Francesca Babb discovers

When the first lockdown closed her restaurants last March, Angela Hartnett was quick to make the situation a little less bleak by teaming up with her friend Lulu Dillon to establish a nonprofit charity, Cook-19. They began making meals for NHS workers from their homes; Lulu’s dad did deliveries. Production then moved to a huge kitchen in Bermondsey, Southeast London, with chefs and volunteers. They now make 1,000 meals for NHS workers every day.

Sadly the remainder of 2020 proved just as tough on the hospitality industry and restaurants countrywide have been closing in their droves, unable to survive amid the limitations of lockdowns and tier systems.

You’d think, given the circumstances, Angela would be in a terrible mood, furious at the sector once again being sidelined by the government. But she is quite the opposite: resolutely unflappable. ‘I don’t think there is a win for any government,’ she says. ‘Nobody anywhere knew what the hell was happening, but communication has been missing. The advice seemed to be: close every restaurant, hotel, bar, café – anywhere that serves food – but then go to shopping centres, where everyone is mixing like crazy. At least in a restaurant you’ve got a metre between tables. We’re a small business, we don’t have the profit to sustain people, but thank god for the furlough scheme. We’ve been lobbying hard for a hospitality minister, and have raised over 100,000 signatures, which means parliament has to debate it, which would help.’

It is this ‘make the best of every situation’ attitude that is part of the reason Angela shone under the notoriously demanding head chef Gordon Ramsay at his first Michelin-starred restaurant, Aubergine, in the early 1990s and has seen her continued rise to become one of the UK’s top chefs. 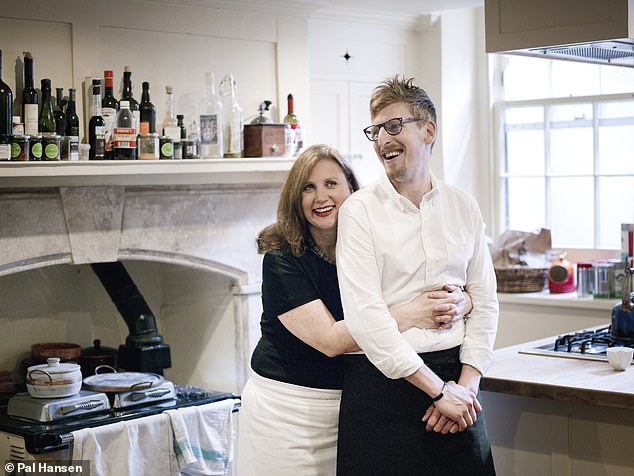 Angela with her husband Neil Borthwick

It’s also why she has become such a brilliant mentor to a host of budding amateur chefs on the BBC’s Best Home Cook, the celebrity version of which will be arriving to soothe our lockdown souls this month. Hosted by Claudia Winkleman and judged by Angela, alongside Mary Berry and food connoisseur Chris Bavin, this series sees the likes of journalist Rachel Johnson and former Corrie star Shobna Gulati tackle British home-cooking favourites in a bid to win.

For Angela, Home Cook is the perfect show. In spite of the Michelin stars, she’s not really bothered by fussy cooking. She was raised by her mother (her father died when she was seven) on a diet of well-cooked, simple food often inspired by her Italian grandma. And on the show she is part of a team, rather than standing centre stage like her mentor, Ramsay. ‘Gordon is the best – no one touches him on TV,’ she says, full of praise. ‘I was chatting to him on the phone the other day. Whenever I do, I start smiling – he’s just a great personality. And people like Tom Kerridge and James Martin are brilliant. I don’t think of myself as up there with them. I would struggle to hold a programme by myself. I’m not being modest, I know my capabilities, and that’s why Home Cook is great because we all bounce off each other. Everyone on Home Cook is lovely.’

This series, of course, was a little different with Covid-safe regulations. ‘It’s a shame because I love giving Mary a hug, but you can’t. And my mum is older than Mary, so I didn’t want to catch it then give it to her either.’

It was thanks to her mother that Angela fell in love with cooking as a child, helping feed the family if her mum was busy working as a childminder, or heading up the road to her nonna’s house to learn about the pasta that has become her trademark. ‘We were never a family who sat in front of the telly and ate dinner,’ she says of growing up in Essex with her mum, elder brother and younger sister. ‘My mum’s a great cook, and we always ate a home-cooked meal at the table. It was humble food, but it was delicious. She trusted us kids, so we could go out late if we wanted, but you never missed supper or lunch as a family.’ 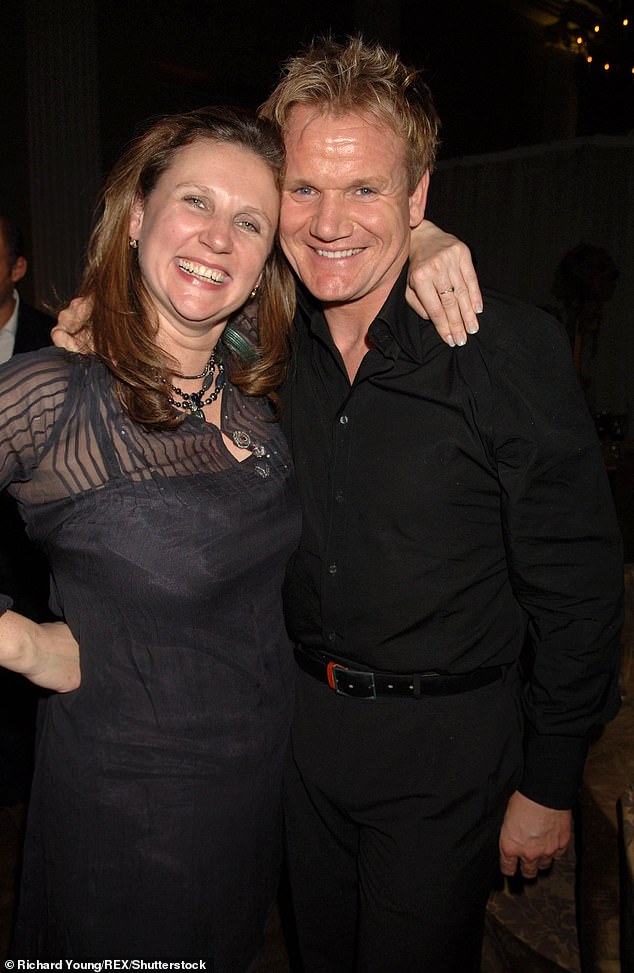 Family remains a core part of Angela’s life. ‘We grew up really quickly. My mum couldn’t come and pick us up from school because she was working, so we walked by ourselves. My sister, brother and I are very close. My sister Anne used to live with me, and now she lives down the road. Whenever I go to see her I don’t ring the bell, I just let myself in. We’ve taken that closeness from my mum and her siblings. I remember sneaking out one night as a teenager when I was staying with my grandmother and she heard me get back at four in the morning. But she didn’t tell my mum, she told my uncle, and he said, “Next time, tell me and I’ll pick you up from the party.” Everyone looked after each other.’

After finishing school, Angela headed to Cambridge Polytechnic to study history and began working in a local hotel kitchen. Having learned the ropes, she moved to Barbados to work at the famed Sandy Lane Hotel before coming back to work at Aubergine under Gordon Ramsay. Her immediate boss, Marcus Wareing, made a bet with the team she wouldn’t last two weeks, such was the pressure of the kitchen and its six-day week of 7am-till-midnight shifts. But she thrived, becoming one of Ramsay’s favourites. ‘It was wonderful,’ she laughs. ‘Marcus and I were talking about it the other day. People think you’re mad for working those hours, but that was the kitchen to work in – the golden days of the Aubergine – and I would not have wanted to have worked anywhere else. Gordon was fair, and he looked after his staff.

That first Christmas, he put £50 in all our hands as a thank-you, which was a lot of money back then. He was only two years older than me, so I’d talk to him like a normal person and we’d laugh. He would ask me questions and for my opinion.’

Despite being the only woman in the kitchen, Angela didn’t feel at a disadvantage. In fact, it was almost the opposite. ‘Gordon was very protective,’ she says. ‘In the early days, he would tell Marcus to send me home because he didn’t want me travelling back late on my own. I used to ignore him and carry on working, but Marcus would say that he’d get in trouble. So one day I told Gordon

She took control of her first restaurant at The Connaught Hotel in Mayfair in 2003. A year later, she was awarded her first Michelin star and in 2007, an MBE for services to the hospitality industry. ‘To get that from the Queen was a real honour. Lots of people have opinions about the Royal Family, but I think the Queen is incredible. What she’s done in her life and given up [in order] to work for this country is amazing.’

It was also at The Connaught that Angela met her husband, fellow chef Neil Borthwick, with whom she lives in London’s Spitalfields. ‘Neil and I were always good friends at work, then he went off to France for five years. We got together during his last year out there. We haven’t worked together since. One day, we might get somewhere, but I won’t be cooking – maybe I’d do front of house. I don’t think both of us should be in the kitchen!’ 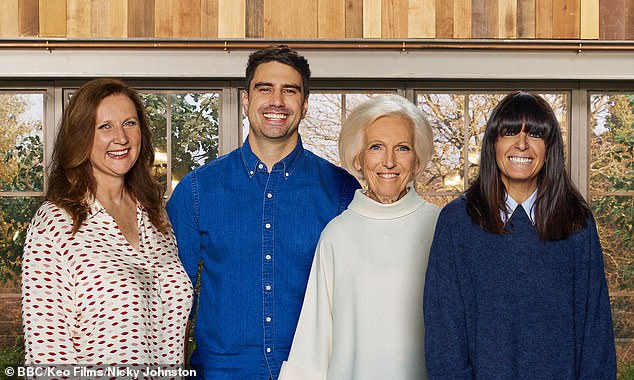 Among friends they’re renowned for entertaining. Has she missed it during the lockdowns? ‘Part of me thinks it’s quite nice not to have to do all the washing-up,’ she laughs. ‘We’re really rubbish at doing clean as you go, so the next day trying to clean the kitchen with a hangover – that crash, bang, wallop – doesn’t make you feel great.’

As our time comes to an end, I ask the most burning question of all. What’s for dinner? ‘Good question,’ she laughs. ‘Last night we had some leftover mussels from one of the kitchens in a pasta sauce, so I think something veggie tonight – I can’t be eating pasta and carbs every day.’ Pasta every day, cooked by Angela Hartnett? That sounds the best way to spend lockdown.