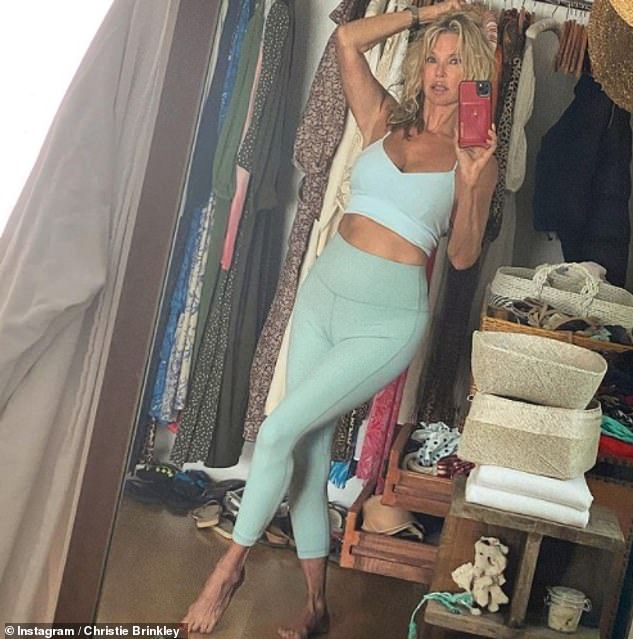 Christie Brinkley joked about ‘turning 50 for the 17th time’ as she approaches her 67th birthday next week.

The model, 66, took to Instagram on Monday to share an image of herself posing in sportswear during her trip to Turks and Caicos as she reflected on her past year in a candid post.

Sports Illustrated Swimsuit star Christie recalled when she struggled to exercise after breaking her right arm and damaging her hip, but has since declared she’s ‘overjoyed to be able to move my body again’ after her replacement treatment.

‘I’ve never felt as old as the number’: Christie Brinkley joked about ‘turning 50 for the 17th time’ as she approaches her 67th birthday next week in an Instagram post on Tuesday

Displaying her toned abs, the former face of CoverGirl stunned in baby blue co-ords, which featured a bralet and matching running tights.

The blonde highlighted her youthful-looking complexion with minimal make-up, while her tresses were worn in its natural curl pattern.

On marking a new milestone on February 2, the actress shared: ‘In 8 days, it’s going to be Groundhogs Day! And I’ll be turning 50 for the 17th time!lol!’ (sic)

The media personality went on to admit she’s only felt ‘her age’ in recent months after sustaining injuries following a helicopter crash back in 1994. 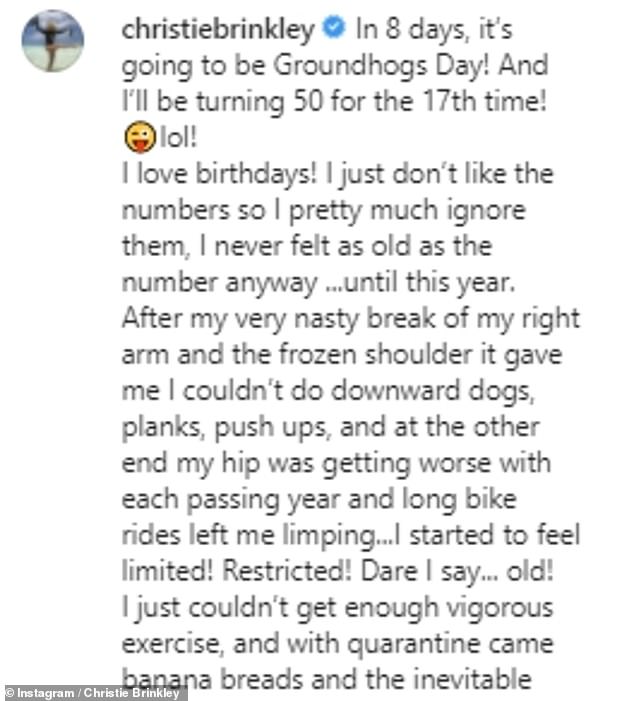 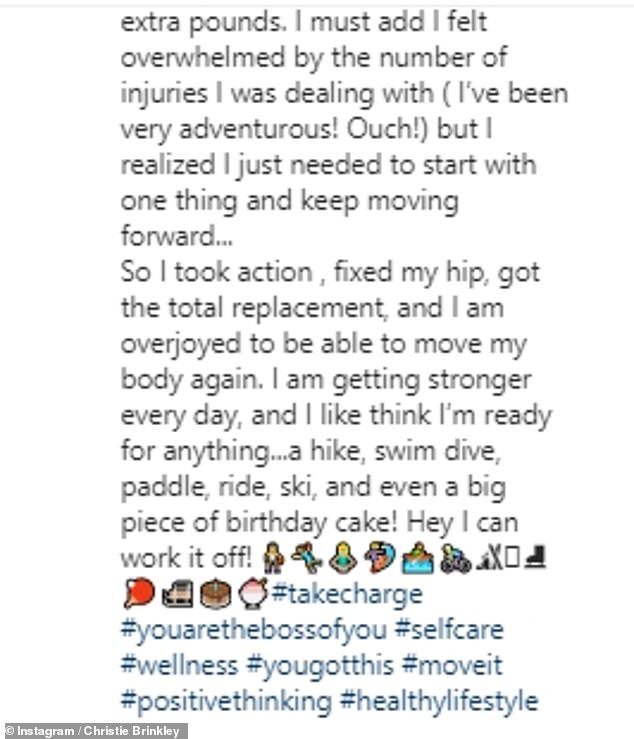 ‘I took action!’ The model, 66, recalled when she struggled to exercise after damaging her hip, but has since declared she’s ‘overjoyed to be able to move again’ after her replacement

Entrepreneur Christie explained: ‘I love birthdays! I just don’t like the numbers so I pretty much ignore them, I never felt as old as the number anyway…until this year.

‘After my very nasty break of my right arm and the frozen shoulder it gave me I couldn’t do downward dogs, planks, push ups, and at the other end my hip was getting worse with each passing year and long bike rides left me limping.

‘I started to feel limited! Restricted! Dare I say… old! I just couldn’t get enough vigorous exercise, and with quarantine came banana breads and the inevitable extra pounds.

‘I must add I felt overwhelmed by the number of injuries I was dealing with ( I’ve been very adventurous! Ouch!) but I realized I just needed to start with one thing and keep moving forward…’ (sic) 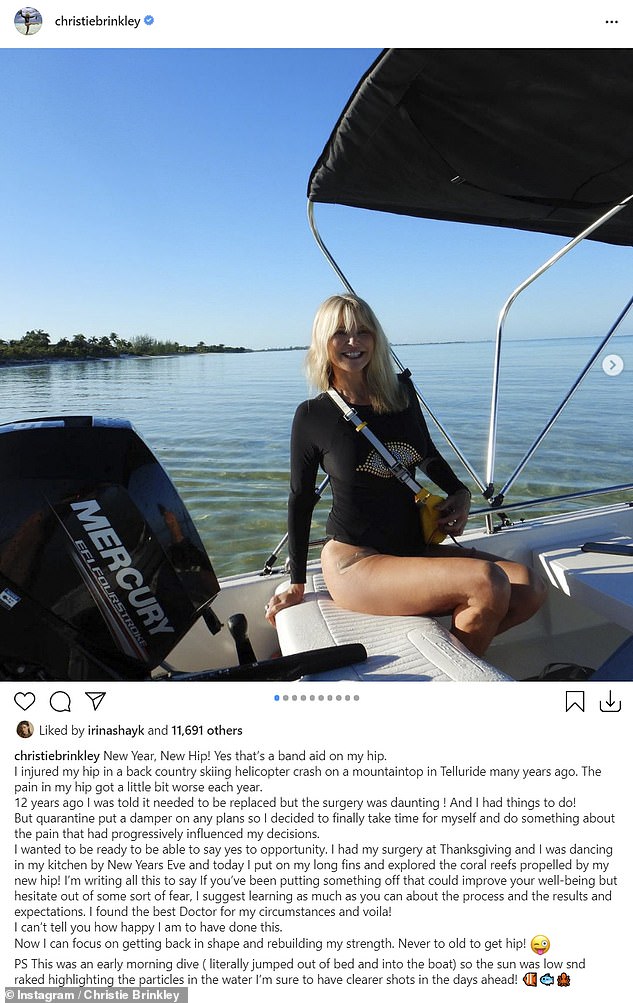 The TV and film star went on to detail her ‘action’ plan, which has helped her return to her healthy lifestyle.

Christie added: ‘So I took action , fixed my hip, got the total replacement, and I am overjoyed to be able to move my body again.

‘I am getting stronger every day, and I like think I’m ready for anything…a hike, swim dive, paddle, ride, ski, and even a big piece of birthday cake! 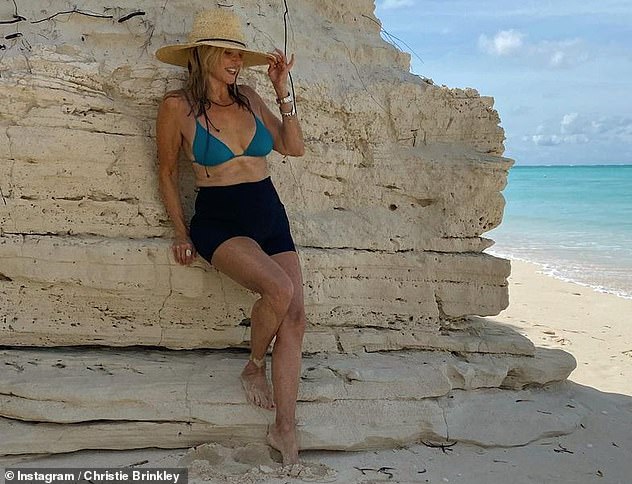 Wow-factor! The former face of CoverGirl has been uploading stunning images from her Turks and Caicos trip

The media personality revealed her surgery news on Instagram earlier this month, after a successful procedure, writing: ‘I injured my hip in a back country skiing helicopter crash on a mountaintop in Telluride many years ago.

‘The pain in my hip got a little bit worse each year. 12 years ago I was told it needed to be replaced but the surgery was daunting ! And I had things to do!

‘I was dancing in my kitchen by New Years Eve and today I put on my long fins and explored the coral reefs propelled by my new hip!’ (sic)

She is currently holidaying with her daughter Sailor Lee, 22, her boyfriend Ben Sosne, son Jack Paris, 25, and his girlfriend Nina Agdal, 28. 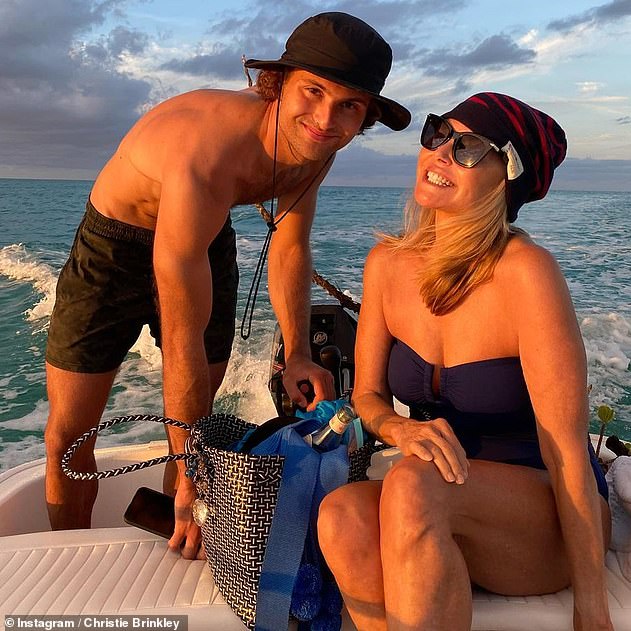