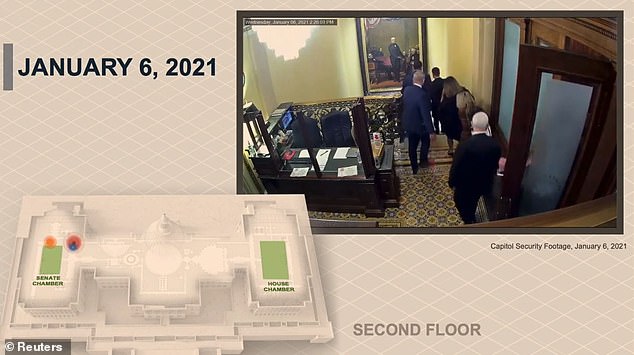 These powerful unseen security camera videos from inside the Capitol show the full horror of the January 6 riot and how the nation’s leaders were kept safe from the rampaging MAGA mob.

The shocking footage, played for the first time before a silent, stunned Senate chamber yesterday, shows the behind-the-scenes efforts as rioters smashed their way into the building.

In the footage from the security cameras, a group of Secret Service agents are seen leading former Vice President Mike Pence, his wife Karen and daughter Charlotte down a flight of stairs away from the Senate chamber.

One of the men is carrying the football which contains the nuclear codes.

‘During the assault on the capital, extremists reportedly coordinated online and discussed how they could ‘hunt down’ the vice president,’ House impeachment manager Rep. Stacey Plaskett (Del.-V.I.) said while showing the footage in the Senate.

‘Journalists in the Capitol reported that they heard rioters say they were looking for Pence in order to execute him.’

Powerful unseen security camera footage from the Capitol riot shows just how close top officials came to danger. Pictured: A group of Secret Service agents are seen leading former Vice President Mike Pence, his wife Karen and daughter Charlotte down a flight of stairs away from the Senate chamber. In the map, Pence is represented by the orange dot and the rioters by the red dot 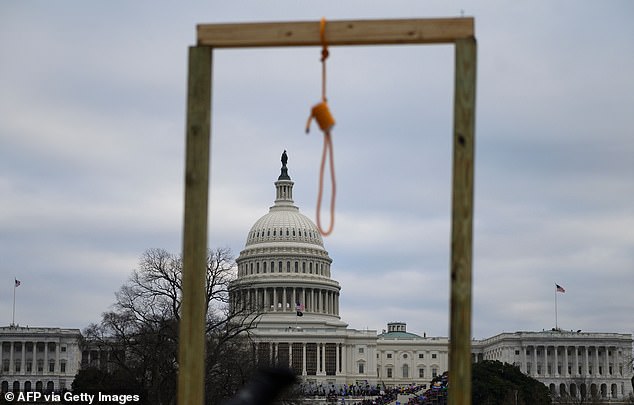 In some of the footage, the crowd could be heard chanting ‘Hang Mike Pence! Hang Mike Pence’. Pictured: A makeshift gallows outside the Capitol building on January 6

Pence is thought to have been targeted for not supporting former president Donald Trump’s false claims of electoral fraud in the presidential election. A makeshift gallows had been erected outside the Capitol Building.

Plaskett also introduced footage showing Capitol Police officer Eugene Goodman running and getting Senator Mitt Romney out of harm’s way before distracting the MAGA mob away from the Senate chamber.

Goodman can be seen running toward the Senate and its famous Ohio Clock before gesturing to Romney, who does an immediate 180-degree turn, having been walking toward the House where another larger mob had already gathered.

‘On the first floor, just beneath them, the mob had already begun to search fo the Senate chamber,’ Plaskett said.

Goodman has been hailed for his efforts to distract the rioters, captured in the footage.

The officer can be seen purposefully provoking the mob in order to draw them away from the door to the Senate chamber and towards other officers waiting further down the hall. 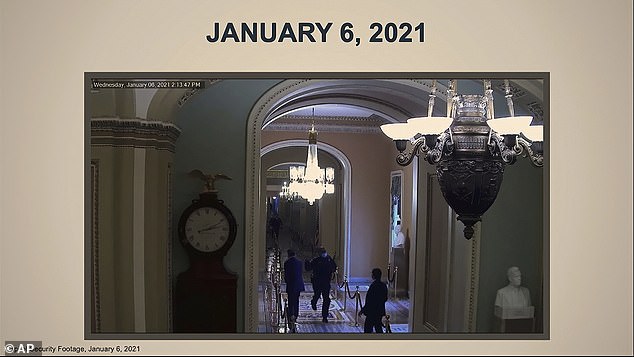 ‘I did not know that was Officer Goodman but I look forward to thanking him when I next see him,’ Romney said after the clip played. ‘I was very fortunate indeed that Officer Goodman was there to get me in the right direction.’

Overall, Romney said of the playback: ‘It tears at your heart and brings tears to your eyes. That was overwhelmingly distressing and emotional.’

A third security camera video shows Senate Majority Leader Charles Schumer’s lucky escape from danger as he is escorted out of his Capitol leadership office as the mob approached.

He and his security detail came within ‘had a near miss with the mob,’ said Democratic Rep. Eric Swalwell of California during his own presentation. ‘They came within just yards of rioters and had to turn around,’ he said.

Schumer can be seen walking up a ramp with his detail. After he goes out of view, Schumer and his detail can be seen running down the same ramp.

‘Officers immediately shut the door and use their bodies to keep them safe,’ says Swalwell.

‘I don’t think many of us feel like eating dinner,’ the New York Democrat noted. 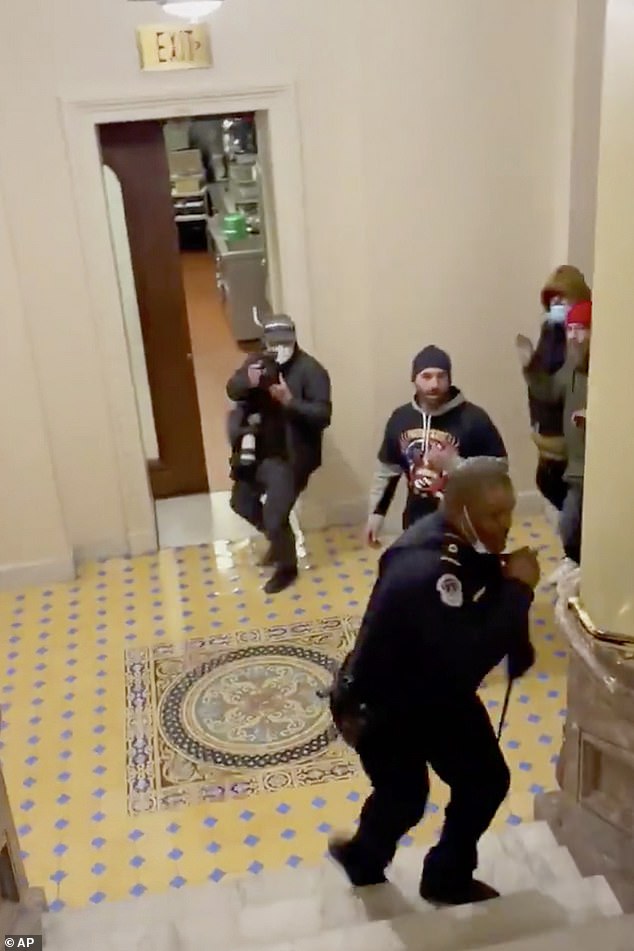 Swalwell – one of the impeachment managers – also played footage of senators being evacuated from the same chamber they were seated in during the trial.

The senators, who are sitting as jurors in Trump’s impeachment trial, saw, for the first time, the footage that showed their escape from the Senate chamber, as U.S. Capitol Police officers created a line of defense to hold the mob back long enough for the lawmakers to be ushered to safety.

‘You were just 58 steps away from where the mob,’ Swalwell told the senators.

The footage showed a hallway with senators running past the camera. In the background, police officers can be seen, holding the crowd away.

The senators sat in silence as the video presentation played, their eyes glued to the TV screens.

‘You know how close you came to the mob. Some of you, I understand, could hear them. But most of the public does not know how close these rioters came to you. As you were moving through that hallway, I paced it off. You were just 58 steps away from where the mob was amassing and where police were rushing to stop them. They were yelling. In this security video, you can see how the police created a line and blocked the hallway with their bodies to prevent rioters from reaching you and your staff,’ he said.

He then played it for them again.

‘Because this is security footage that you’ve not seen before, I want to play it again. At the top of the screen, the other end of that hallway, where the mob has amassed, and the officers are rushing to protect you,’ Swalwell told the senators. 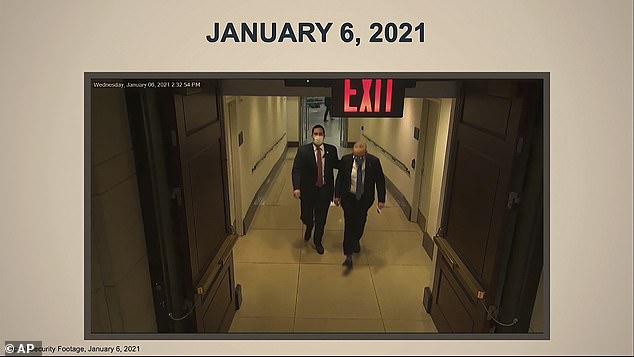 Footage also shows Sen. Charles Schumer being led away, only to turn around and rush in the other direction 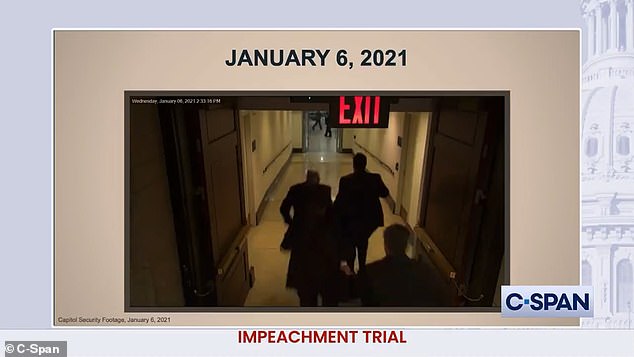 Moments after walking up a ramp, Schumer and his team rush back down to try and reach safety

The footage also included the moment the MAGA mob burst into the Capitol Building, with Plaskett pointing out the first man who entered the Capitol was wearing ‘full tactical body armor and carrying a baseball bat.’

‘Others are carrying riot shields. Among this group are members of the Proud Boys,’ she noted.

The footage showed rioters searching for House Speaker Nancy Pelosi in and around her office, but she had been pulled entirely from the building for her own safety.

Plaskett also highlighted that Richard Barnett, the rioter who was photographed seated at Pelosi’s desk, had been carrying a 950,000 volt stun gun, a weapon the FBI had since identified. ‘They would have killed her,’ said Plaskett.

‘The vice president, the speaker of the House, the first and second in line to the presidency, were performing their constitutional duties, presiding over the election certification and they were put in danger because President Trump put his own desires, his own need for power over his duty to the Constitution and our democratic process,’ Plaskett said.

During his presentation, Swalwell also shared harrowing bodycam footage from police stationed outside the building.

Swalwell talked about the ‘hand-to-hand combat’ the officers were forced to engage in, speaking of their ‘extraordinary bravery.’

At the top of his presentation he said, ‘I want to warn you that the following audio and video is graphic and unsettling.’ 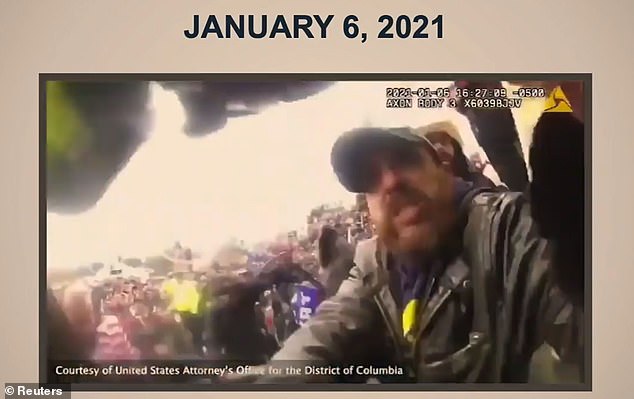 During his presentation, Swalwell also shared harrowing bodycam footage from police stationed outside the building that showed officers being attacked by rioters

In a second audio clip that Swalwell played senators could hear the voice of a D.C. Metropolitan Police Department officer shouting, ‘We have been flanked and we lost the line,’ yelling out the code that an officer needed assistance.

Videos then showed officers being sprayed in the face.

‘In this new security video, you can see the mob attacking officers with a crutch, a hockey stick, a bullhorn and a Trump flag,’ Swalwell said, before rolling footage from the same moments from two perspectives, including from an officer’s bodycam.

The California Democrat noted that this footage was taken two hours after the initial Capitol break-in.

‘The attack on police that afternoon was constant,’ Swalwell said.

D.C. Police Mike Fanone, Swalwell continued, was one of three police officers that the mob grabbed and dragged down the Capitol Building’s stairs. Fanone was tased, which triggered a heart attack, Swalwell revealed.

‘It was a medieval battle scene, it was some of the most brutal combat I’ve ever encountered,’ Fanone said in a video clip, recalling the experience.

Swalwell paid homage to the three officers who died, Brian Sicknick, who perished from his injuries and officers Howard Liebengood and Jeffery Smith, who took their lives. He noted that another 140 police officers had been injured.