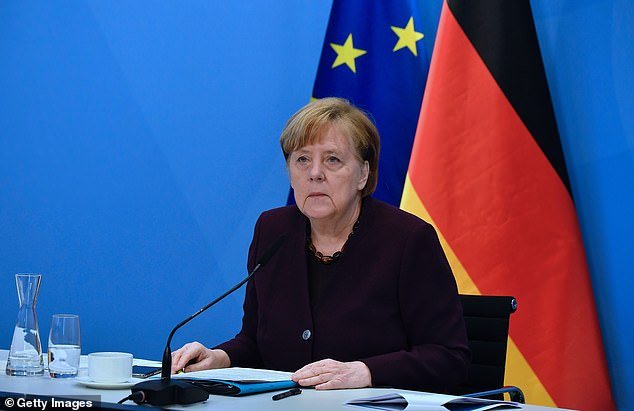 Chancellor Angela Merkel has said that Germany is now in the third wave of the coronavirus pandemic, two sources told Reuters news agency.

‘We are now in the third wave,’ Merkel told lawmakers in her conservative party on Wednesday, according to two sources who attended the meeting.

The chancellor is also said to have warned that any easing of lockdown measures introduced late last year and extended until March 7 would have to be done gradually.

‘We cannot afford ups and downs,’ Merkel told the meeting, suggesting she wanted any return to normal life to be done carefully so as to avoid having to reintroduce lockdown measures if infections start to rise again.

The closure of all non-essential businesses and border controls with Austria and the Czech Republic, where there have been outbreaks linked to a more infectious variant of the virus, have helped Germany bring down new daily COVID-19 infections. 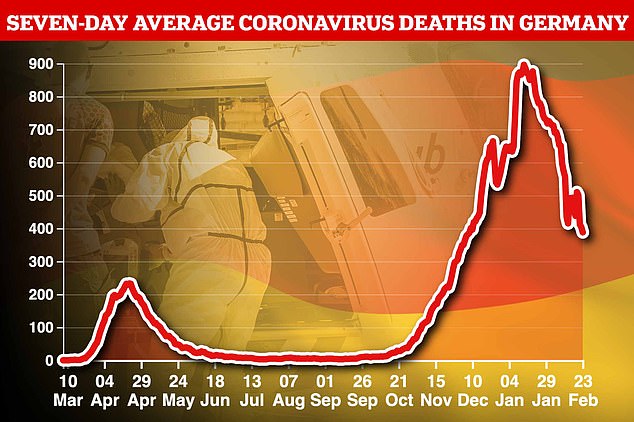 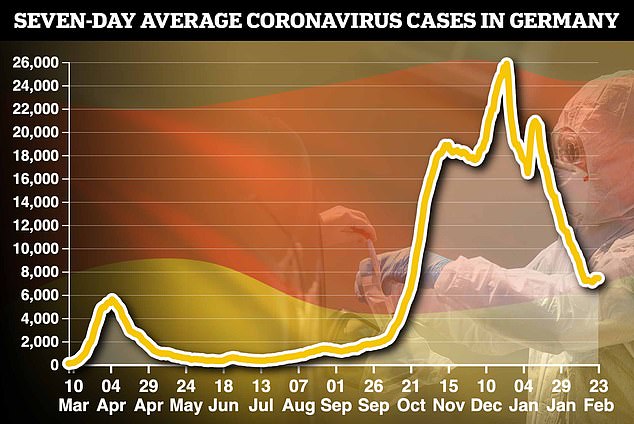 But a slow vaccination roll-out and the risk of major outbreaks of fast-spreading variants already identified in Germany could make any easing of restrictions more difficult.

During Wednesday’s meeting, Merkel also said that making rapid tests more available and boosting testing capacity could make a return to normal more durable, according to the sources.

The chancellor’s reported comments came a day after her chief spokesman pleaded with citizens to take AstraZeneca’s Covid vaccine after scaremongering about the jab led people to reject it.

Steffen Seibert said on Monday that the British-made jab is ‘both safe and highly effective’ and will ‘save lives’ as he urged people to take it, just weeks after ministers wrongly claimed it doesn’t work in older people.

He spoke after it emerged Germans have been skipping vaccination appointments when they learned they would be given the AstraZeneca jab – hampering the country’s already-slow roll-out.

Meanwhile Health Minister Jens Spahn suggesting drafting in the army to give the shots to soldiers and police officers in an attempt to drive inoculation rates up. 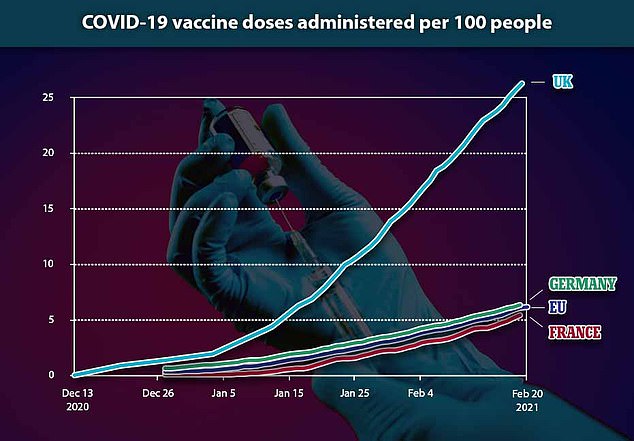 The UK has stormed ahead of France and Germany in its mass vaccination drive, with Europe’s plans hampered by supply problems and scaremongering over foreign jabs 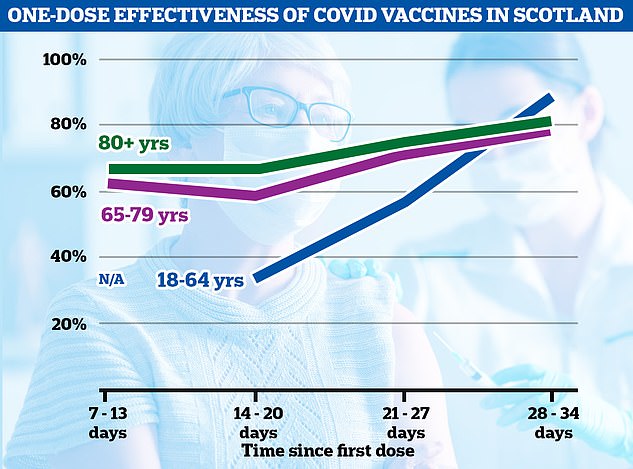 European leaders including in France and Germany previously suggested the AstraZeneca’s jab doesn’t work in older people, but new data (above) shows it provides strong protection across all age groups 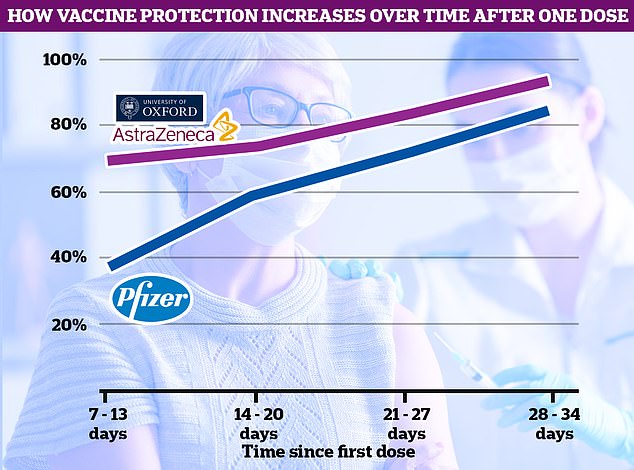 What Germany said about AstraZeneca’s vaccine – then and now

25 Jan: German newspaper anonymously quotes a minister who said vaccine ‘is only 8 per cent effective in the elderly’

28 Jan: Germany says over-65s should not take jab, because there is ‘insufficient data to assess its efficacy’

11 Feb: Head of German hospital says 40 per cent of staff given AstraZeneca vaccine had side-effects

19 Feb: Health Minister Jens Spahn says it is a ‘privilege’ to be offered British jab, which is ‘safe and effective’

22 Feb: Merkel’s spokesman Steffan Seibert insists the vaccine is ‘safe and effective’ and will ‘prevent deaths’

Spahn’s ministry confirmed it had asked the army for help in setting up two vaccination centres in Bonn and Berlin for state employees in uniform.

Figures showed that, of 1.5million AstraZeneca shots due to have been delivered by the end of last week, only 187,000 have been used as of Monday.

The AstraZeneca vaccine has met resistance in Germany and other European countries after trials showed it to be less effective than Pfizer and Moderna shots.

The research found that nearly a quarter of people receiving the AstraZeneca shot experienced flu-like symptoms, and around 15 per cent experienced shivers or fever – more than those reporting side effects from the Pfizer or Moderna vaccines.

Germany was also quick to downplay AstraZeneca’s vaccine amid a row with the UK over jabs, but is now facing an embarrassing climbdown after data showed it may be more effective than the German-made Pfizer vaccine.

Research conducted in Scotland on real-world Covid patients and released on Monday showed the AstraZeneca jab reduces the risk of being admitted to hospital by up to 94 per cent after just a single dose, compared to 85 per cent for Pfizer.

The same research also showed that just one jab of either vaccine offers strong protection across all age groups, with up to 80 per cent effectiveness even in the over-80s within a month of being inoculated.

The findings will also be embarrassing for French President Emmanuel Macron who previously said the AstraZeneca vaccine is ‘almost ineffective’ in the over-65s.

Skepticism around the vaccine led France, Germany, Switzerland, Denmark, Sweden and Norway to recommend it only be used in younger people – despite the EU and WHO saying it was safe for everyone.

But German leaders have launched a public relations push to reassure the public that the AstraZeneca shot, developed at the UK’s Oxford University, works.

Germany has so-far administered 5million vaccine doses, or around six for every 100 residents, relying mostly on the Pfizer vaccine.

That puts it well behind the likes of the United Kingdom, which is relying heavily on the AstraZeneca jab, and which has inoculated more than 26 in every hundred people. 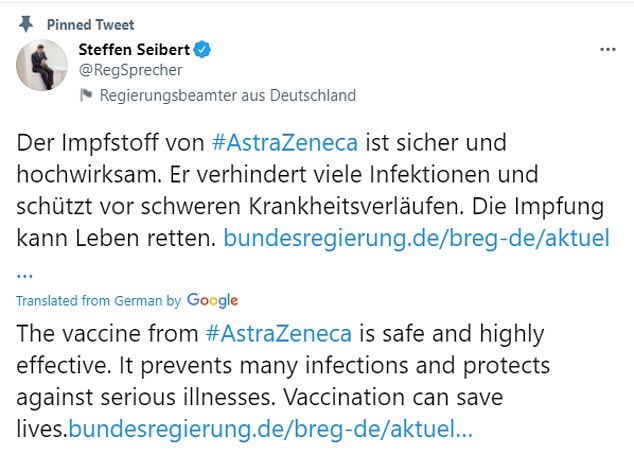 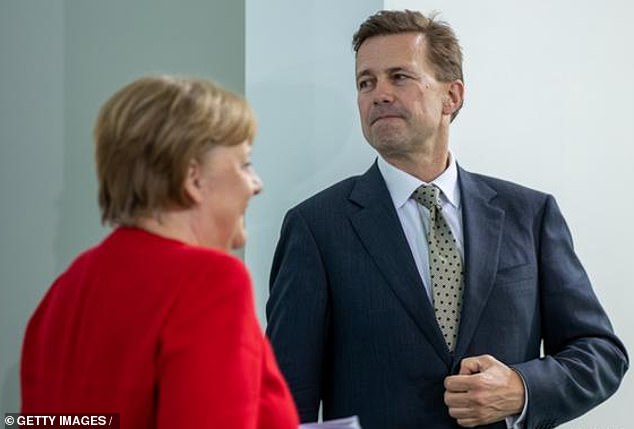 It is now unlikely that Germany will have its entire adult population vaccinated by the end of the year, while the UK has vowed to offer every adult a jab by June 31.

The UK’s mass-vaccination plan also got underway early in the new year, but it will take until at least April for Europe to start administering similar numbers of jabs.

The latest German government figures indicate that it will take delivery of at least 10 million further doses of vaccine by April 4.

Spahn wants to start administering vaccines at family doctors’ practices as soon as 3million to 5million doses are delivered weekly, he told a meeting of leaders of Merkel’s conservative party earlier according to sources present.

That would help ease potential bottlenecks at the regional vaccination centres that have been set up by Germany’s 16 federal states.

While coronavirus cases have fallen in recent weeks, the rate of decline has slowed with the seven-day incidence rate hovering at around 60 cases per 100,000.

Fears that new infections are being driven by more-infectious variants of the virus imported from overseas, Germany announced on Tuesday that it is expanding strict border checks with the Czech Republic and Austria until at least March 3.

The checks were introduced on February 14 in a bid to reduce the spread of more contagious coronavirus variants that have taken hold in those areas. 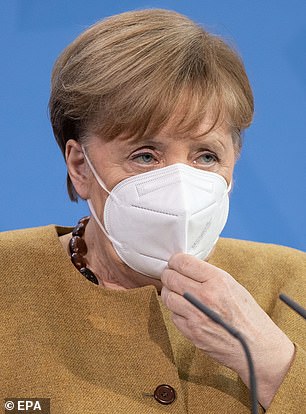 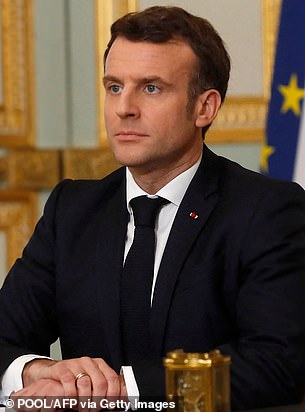 Data showing AstraZeneca’s jab is effective will be embarrassing for the likes of Merkel (left) and Macron, after they cast doubt over it amid a row with the UK over jabs 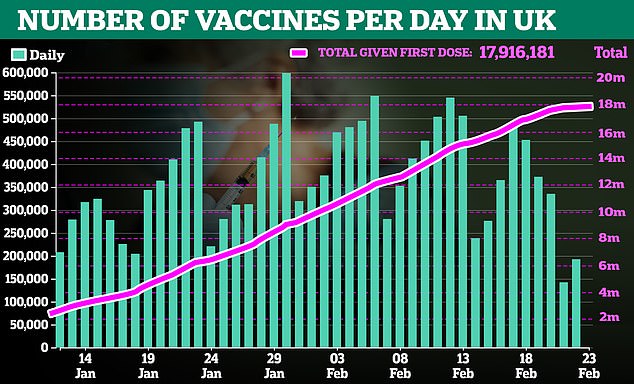 Britain has been pushing ahead with a mass vaccination drive that will see all adults offered a jab by June 31, while Europe’s drive has yet to gather pace

Germany is limiting entry to its own citizens and residents, truck drivers, health workers and a few others including cross-border commuters working in ‘systemically relevant sectors.’ All have to show a negative coronavirus test.

German border police have turned back thousands of people since the checks started.

Michael Roth, minister for Europe, on Tuesday rejected suggestions from Brussels that the rules aren’t in-keeping with EU law.

‘These measures obviously put a massive strain on border regions, commuters and the transport of goods and the single market, but the protection of our citizens is paramount,’ he said ahead of talks with his EU counterparts.

He indicated, however, that Germany was trying to prevent similar restrictions on its border with France.

Germany is in close contact with French authorities to ensure coordination of border restrictions, Roth said, adding that Germany has so far not seen the new variants of the virus spread from France, unlike was the case with the Czech Republic. 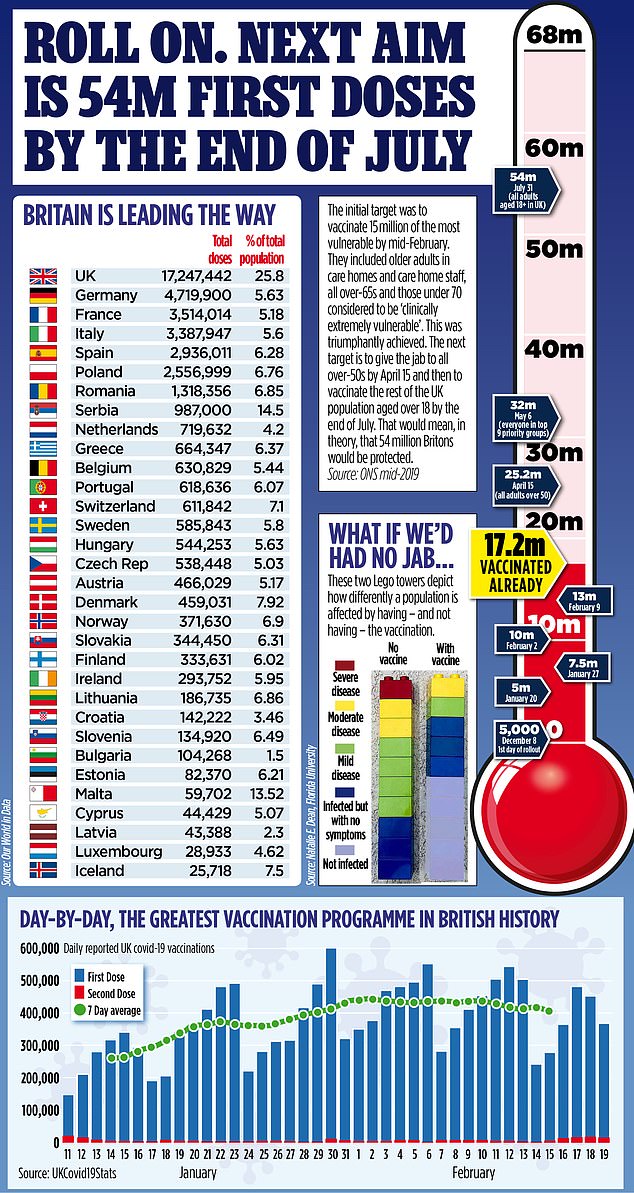