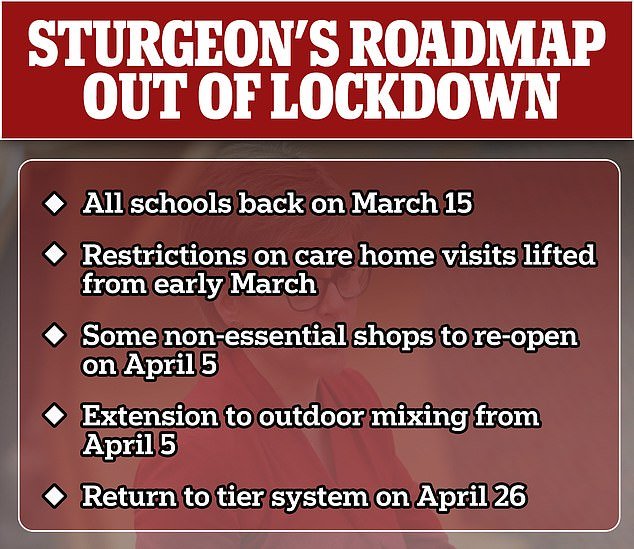 Nicola Sturgeon today unveiled a lockdown exit roadmap for Scotland which will see the stay at home rule lifted and the return of some non-essential shops on April 5.

She said her ‘deliberately cautious’ plan will start with more pupils heading back to classrooms on March 15 and with the limit on outdoor mixing being increased on the same date to allow four people from a maximum of two households to meet.

April 5 will then see all remaining pupils return to school as well as communal worship being allowed to restart.

The definition of ‘essential’ retail will also be changed at this point to allow more shops to reopen – one week earlier than the return of all retail in England which is earmarked to take place from April 12.

However, Scotland will have to wait until April 26 for a ‘phased but significant reopening of the economy’ when the nation will return to a tier system of restrictions.

Initially the aim is for all parts of the country to move into level three at that point before then moving down the levels based on infection rates and the rate of transmission.

Ms Sturgeon said the coronavirus situation in Scotland is ‘still quite precarious’ as she urged the country to be ‘cautious, careful and patient’.

The unveiling of the lockdown roadmap for Scotland comes one day after Boris Johnson set out his strategy for England.

One major difference between the two is that Scotland will return to a system of geographic levels while England will exit lockdown as a whole and will not be going back to tiers. 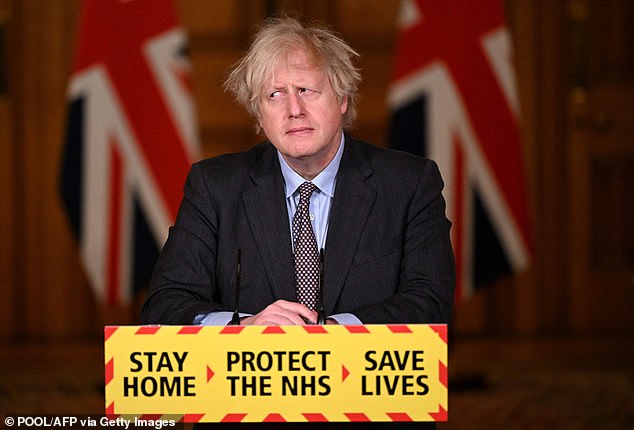 The old levels system in Scotland was split into five different tiers, ranging from Level 0 to Level 4.

Areas in Level 4 were subject to restrictions close to that of a full lockdown, with non-essential shops closed while six people from two households could meet outdoors.

Level 0 was as close to normal life as possible, with people allowed to meet indoors with eight people from three households and businesses allowed to open with safety measures in place.

Ms Sturgeon said the vaccination drive will eventually allow a significant easing of rules but until that point restrictions will have to be released slowly.

Confirming the return to tiers, she said: ‘As I have already emphasised, the strategic framework is deliberately cautious at this stage but I want to be clear that in the coming weeks if the data allows and positive trends continue we will seek to accelerate the easing of the restrictions.

‘However, the framework today provides detail on what as of now we expect our next changes to be.

‘Firstly it confirms that if all goes according to plan we will move fully back to a levels system from the last week in April.

‘At that stage we hope that all parts of the country currently in level four will be able to move out of level four and back initially to level three, possibly with some revision to the content of the levels and afterwards to levels dependent on incidence and prevalence of the virus at that time.’

She added: ‘It is therefore from the last week of April that we would expect to see phased but significant reopening of the economy, including non-essential retail, hospitality and services like gyms and hairdressers.’

Ms Sturgeon said the Scottish government will set out details in the middle of March on how decisions on levels will be made, whether the rules in each level will change and the order in which different sectors of the economy will be allowed to reopen.

Setting out what she expects to happen between now and the end of April, Ms Sturgeon said: ‘We envisage a progressive easing of the current level four restrictions that apply across most of the country at intervals of at least three weeks, along with changes nationally on education and care home visiting and the immediate priority will continue to be the return of schools.

‘All of these easings will of course depend on an assessment that it is safe to proceed.

‘The first easing started yesterday with the partial return of schools, in addition universities and colleges are able to bring back a small number of students, no more than five per cent of the total where face to face teaching is critical.

‘We will also ease restrictions on care home visiting from early March and guidance was set out at the weekend.

‘The next phase of easing will be a minimum of three weeks later so indicatively from March 15. We hope that this will include the next phase of school return which will start with the rest of primary school years four to seven and also getting more senior phase secondary pupils back in the classroom for at least part of their learning.’

Ms Sturgeon also said that social interaction rules will be eased from March 15, with the limit on outdoor mixing being increased to four people from a maximum two households compared to the current rule of two people from two households.

Rules could then be further eased from April 5, with Ms Sturgeon saying it is the ‘hope’ and ‘expectation’ that the stay at home restriction will be lifted.

She continued: ‘We would aim for any final phase of school return to take place on this date. Communal worship will also we hope restart around April 5 albeit with restricted numbers to begin with.

‘However, in deciding the exact date for this we will obviously take account of the timing of major religious festivals, for example Easter and Passover so it may be a few days earlier when communal worship can restart.

‘We will seek to ease the restrictions on household gatherings further so that at least six people from two households can meet together.’

Ms Sturgeon also said that this phase would see some more shops allowed to reopen.

She said: ‘That will start with an extension of the definition of essential retail and removal of restrictions on click and collect and then three weeks after that… from the 26th of April assuming the data allows it we will move back to levels with hopefully all of Scotland that is currently in level four moving to level three albeit with some possible modifications.

‘At that stage we will begin to reopen the economy and society in the more substantial way that we are all longing for.’

Ms Sturgeon stressed that all of the dates are indicative and ‘all of this depends on us continuing to suppress the virus now and continuing to accept some trade offs for a period’.

‘If we do so I am very optimistic that we can make good progress in returning more normality to our lives and to the economy,’ she said.

‘I know this is still a cautious approach which thought absolutely essential to control the virus and protect health is nevertheless extremely difficult for many businesses.

‘The Scottish government is committed to continuing support for businesses, for example, providing we receive confirmation of consequentials in the March budget we will support the strategic framework business fund until at least the end of June.’

Ms Sturgeon said she believes her timetable for easing lockdown is ‘reasonable’ and that by the summer she hopes Scotland will be ‘living with much greater freedoms than we are today’.