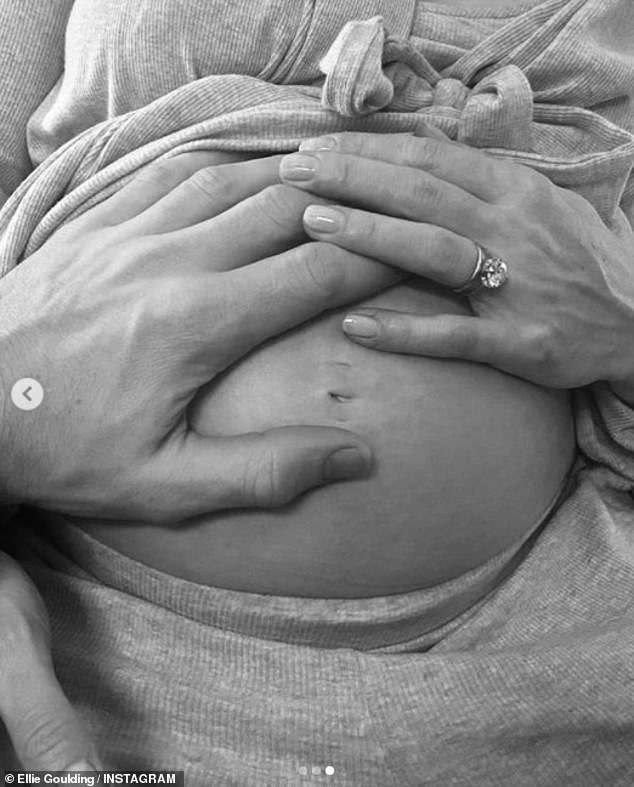 Pregnant Ellie Goulding revealed she is eight months pregnant with her first child in a Vogue interview and photoshoot on Tuesday.

And later that evening, she shared a new picture of her baby bump on social media, with her diamond clad hands placed alongside her husband Caspar Jopling’s.

Ellie, 34, has kept her pregnancy private until now, revealing will give birth in weeks – and took to Instagram to thank fans for their well wishes.

Beautiful: Pregnant Ellie Goulding shared a new Instagram picture of her baby bump on Tuesday as she thanked fans for their kind words after revealing she will give birth in weeks 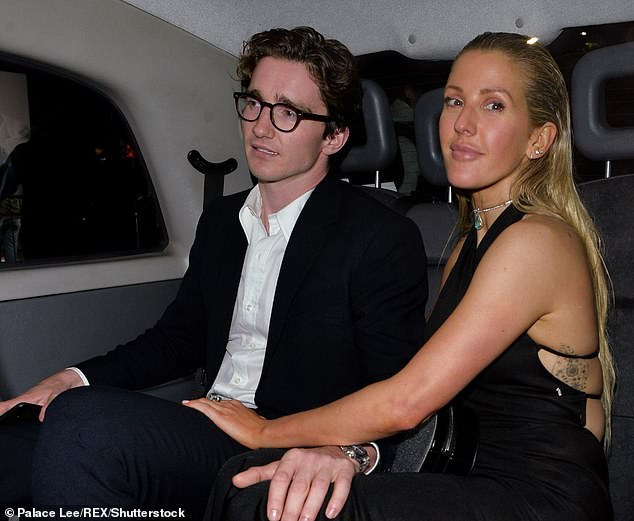 Love: The singer revealed she fell pregnant in August during a trip to Italy on her one year anniversary with Caspar Jopling (pictured in June 2019)

She wrote: ‘I’ve received so many kind messages of love and well wishes today, thank you so much and thank you @voguemagazine x.’

A host of celebrities continued to congratulate her in the comments.

Actress Kate Hudson wrote: ‘❤️❤️❤️ Congrats! I’m so happy for you and your growing family! What joy ❤️❤️❤️.’ 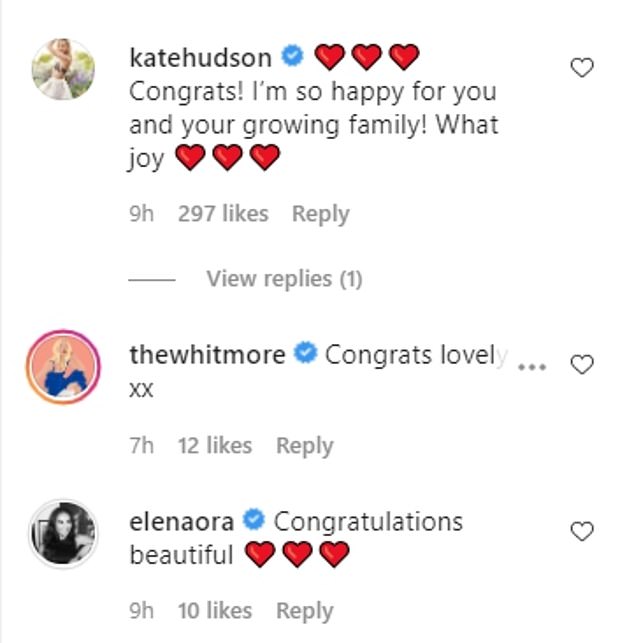 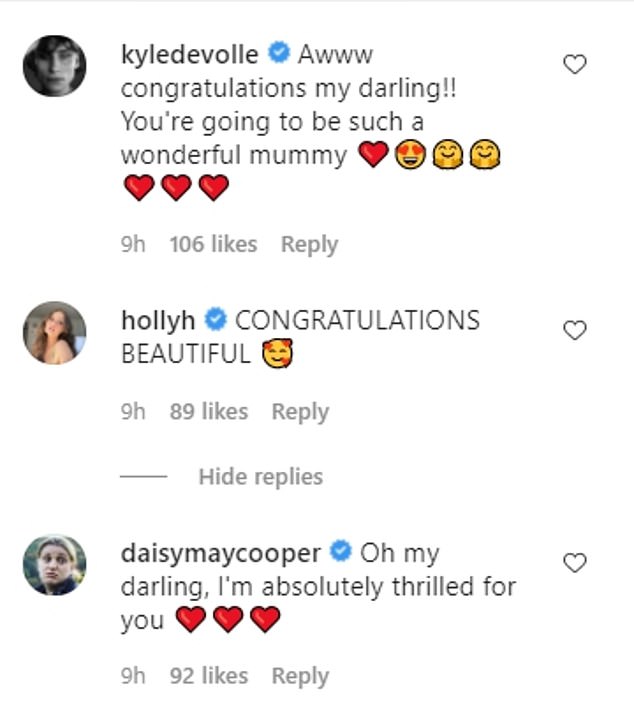 Daisy May Cooper wrote: ‘Oh my darling, I’m absolutely thrilled for you ❤️❤️❤️.’

And Roxie Nafousi penned: ‘I’m so happy for you and can’t wait for play dates. You look so beautiful ❤️❤️❤️.’

Her post came after Ellie revealed she’s ditched her ‘smug’ diet for ‘McDonald’s, sugar and carbs’ as she reflected on her secret lockdown pregnancy.

Following the surprise news that she is expecting her first child with husband Caspar, 29, the singer said she’s embraced her newfound curves. 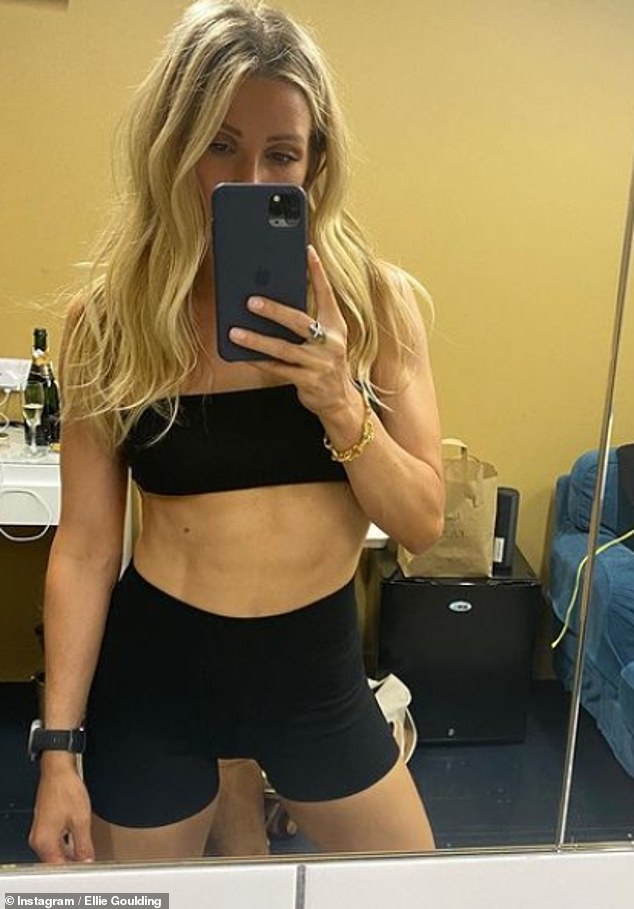 ‘I was terrified!’ Ellie also revealed she’s ditched her ‘smug’ diet for ‘McDonald’s, sugar and carbs’ after announcing she’s expecting her first child with Caspar

In an interview with Vogue, Ellie admitted that despite the support of her husband Caspar, being pregnant during lockdown has been a ‘lonely’ experience.

Ellie, who confirmed that she is eight months pregnant, confessed that she’s gone from living on a healthy diet of salads and nuts to indulging in fast food.

She said: ‘I want a better word than womanly, [but]—I have curves I’ve never had before. I’m enjoying it. My husband’s enjoying it.

‘I actually went from being smug about how healthy my salads were and my breakfasts and eating nuts and seeds, and then all I wanted was McDonalds.

‘And I was kind of terrified, I suddenly wanted all of the bad things! Whatever this baby did when it took over my body was like ”Hell no—I do not want broccoli, spinach, collards! I just wanted sugar and carbs.”’

The singer added that she had been enjoying a good streak of fitness before finding out the news, and had been on a vegan diet until May 2020 that was no longer adopting a vegan diet.

Ellie candidly said that being pregnant during lockdown has been a ‘particularly’ lonely experience, but she felt the need to keep her baby news a secret during the Covid pandemic.

She added that she felt like complaining about being pregnant was a taboo.

Ellie who married art dealer Caspar in 2019, said she fell pregnant while on a trip celebrating their one-year anniversary.

The Burn hitmaker also revealed that she does know the baby’s gender ‘by default’ when she had the scan, but wasn’t interested in having any sort of gender reveal and just wanted a healthy baby. 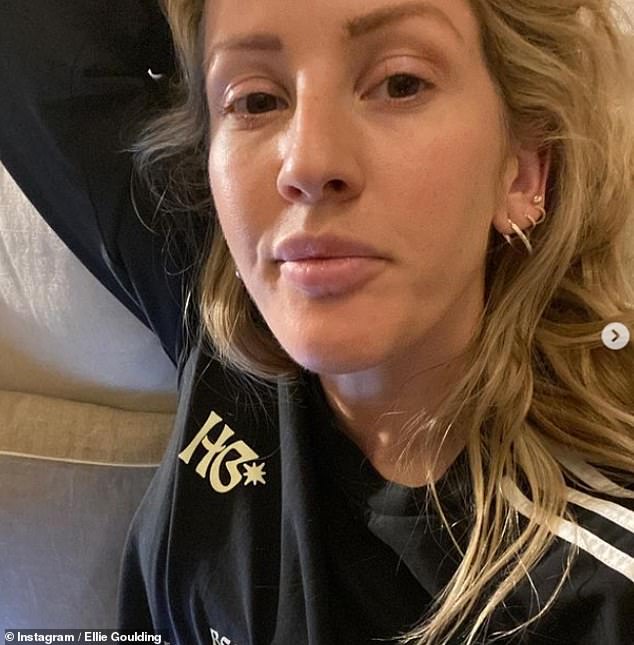 Tough: Ellie candidly said that being pregnant during lockdown has been a ‘particularly’ lonely experience, but she felt the need to keep her baby news a secret during the Covid pandemic

Ellie and Jasper met in 2016 after they were seated next to each other at a dinner arranged by their mutual friend, Princess Eugenie.

The pair got married at a star-studded wedding at York Minster in August 2019, attended by everyone from the Duchess of York Sarah Ferguson to the actress Sienna Miller and singers Katy Perry and James Blunt.

Her husband was educated at Eton and Harvard, and is the son of an aristocratic Yorkshire landowner and the nephew of art dealer Jay Joplin.

Back in March Ellie revealed that rather than bringing ‘closure’ on her single years, getting married has given her a sense of new ‘independence’.

The singer discussed her marriage and career during an interview with #Legend, as she reached the 10 year anniversary of her first album, Lights.

Congrats! She revealed she was two months pregnant when she performed at the V&A in August last year, her last major appearance, but didn’t know it yet

Ellie discussed feelings happiness and freedom in her relationship, as well as dealing with ‘curiosity’ and feeling like a ‘total mess’ while starting out in twenties.

She divulged: ‘I found so much more happiness in myself without relying on another person. I’m married now, so you would think that would be the cue for me to be dependent on the other person, but actually I couldn’t feel more independent than I do right now.’

The Love Me Like You Do singer continued by revealing she thinks it’s ‘epic’ that Caspar wants to spend his life with her and she feels a sense of ‘freedom’ from his acceptance and support.

Ellie also added that their marriage has given her a feeling of confidence, saying: ‘It’s a strange paradox, because marriage seems as though it should give you some kind of closure for something. But I feel the opposite – it feels like a kind of freedom.’

As well as discussing her contentment with married life, Ellie also referenced more trying times as she discussed feeling like a ‘total mess’ in her twenties as she tried to start out in the music business.

She admitted: ‘Oh wow… you know, back then I was extremely curious. What’s the word for a total mess? I guess I was such a curious person, but I was very confused.’ 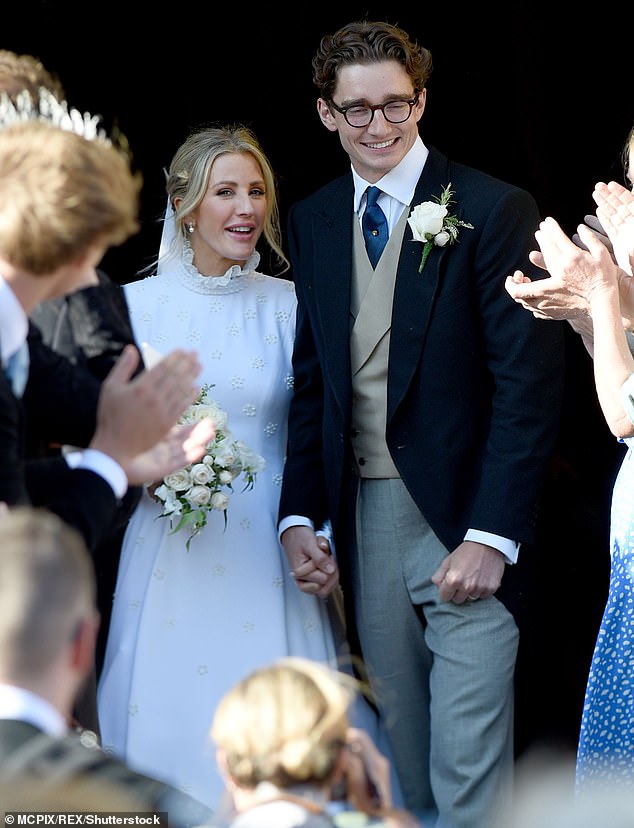 I do: Ellie and husband Caspar tied the knot at York Minster in August 2019 in front of star-studded guests including Princess Eugenie, James Blunt and Katy Perry