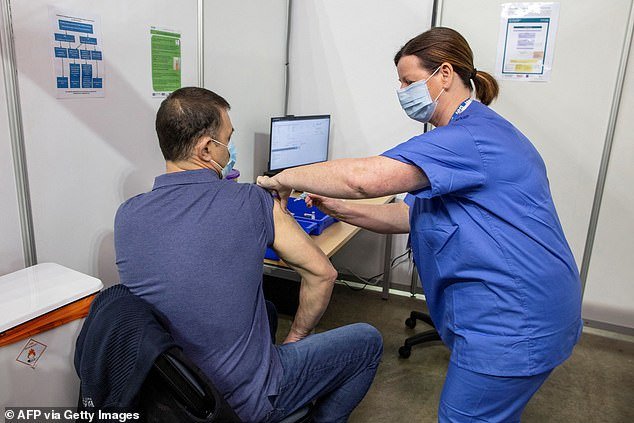 Healthy under-50s who live with an adult with a weak immune system will be added to the UK’s Covid vaccine priority list.

Health Secretary Matt Hancock confirmed today that all adults who share a home with someone who is immunocompromised will be offered a vaccine by mid-April.

Those include people living with someone who is having chemotherapy, has HIV or blood cancer, or are taking drugs to dampen their immune system after an organ transplant.

Vaccines don’t work as well in these people because the immune system’s reaction to the jab is what protects people from the virus. If their body can’t muster a strong response to the vaccine it can’t form the cells needed for long-term immunity.

So although the patients themselves are already on the priority list and have mostly been vaccinated already, jabbing their households will protect them even more by preventing the virus getting into their home, health chiefs hope.

Mr Hancock told the NHS to expand the roll-out after being advised to do it by the Joint Committee on Vaccination and Immunisation (JCVI). Officials have not given a figure for how many people will be bumped up the priority list.

The same move has not been made for family members of children with weak immune systems because children are not at risk of severe Covid-19 except in very rare circumstances.

Today’s decision follows the addition of all adults with learning disabilities to the priority list in February.

Health Secretary Matt Hancock confirmed today that all adults who share a home with someone who is immunocompromised will be offered a vaccine by mid-April (Pictured: A man gets vaccinated in Belfast) 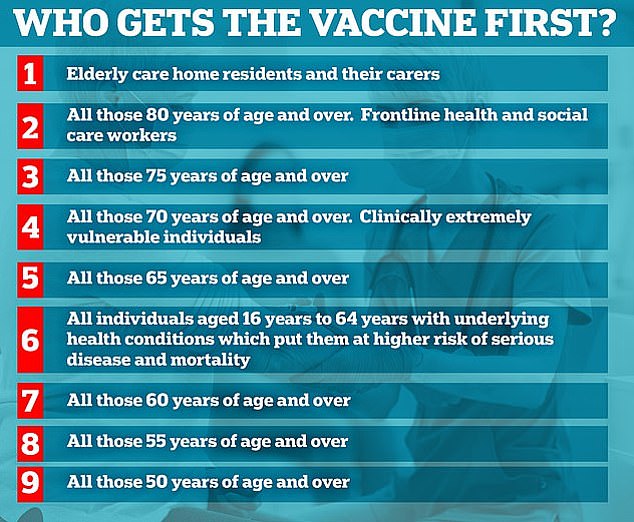 This is the basic vaccine priority list – since it was drawn up, adults with learning disabilities and those who live with people with weak immune systems have been added to group six

‘Yet we know that the vaccine isn’t as effective in those who are immunosuppressed.

‘Our latest advice will help reduce the risk of infection in those who may not be able to fully benefit from being vaccinated themselves.’

The move is understood to be the first time entire households are being prioritised in the vaccination programme because of someone they live with.

The hope is that vaccines successfully stop transmission of the virus and immunising housemates and family members will prevent Covid getting into the house.

There is ‘increasing evidence’ that this will work as hoped, the JCVI said.

Dr Mary Ramsay, head of vaccines at Public Health England, said: ‘Our surveillance systems and research studies are showing the vaccines can reduce asymptomatic infection and limit transmission of the virus.

‘By vaccinating those who live with adults who are immunosuppressed, we can further help protect vulnerable people.’

Just one dose of a coronavirus jab more than halves the risk of a care home resident catching the disease, a study has found.

Scientists from University College London saw that infection rates fell by 62 per cent five weeks after someone’s first dose of a jab, and 56 per cent after four weeks.

This suggests at least half of England’s care home residents are now protected from the disease – 10,321 out of 10,413 homes across the nation were visited by medics by the end of January.

More than 41,000 care home residents have died of Covid during the pandemic and the survivors were top of the vaccine priority list because they are at such high risk.

UCL’s study, which looked at more than 10,000 people, was one of the first to look at how well vaccines protected elderly people. Researchers said there was ‘substantial’ protection.

Dr Laura Shallcross added: ‘A single dose has a protective effect that persists from four weeks to at least seven weeks after vaccination.

‘Vaccination reduces the total number of people who get infected, and analysis of lab samples suggests care home residents who are infected after having the vaccine may also be less likely to transmit the virus.’

People with weakened immune systems are among those who will still be at risk even when the jab roll-out is complete because vaccines may not work for many of them.

Scientists and ministers have repeatedly warned there will be more hospital admissions and deaths from Covid in a third wave and people for whom the jabs don’t work are likely make up a large proportion of them.

People in the immunosuppressed group include people who:

Only over-16s who live with the patients will get the jab because none have yet been approved for use in children.

And the household members will be listed alongside JCVI priority group six, which includes the patients themselves and other adults with serious health conditions.

In a reply letter to the JCVI, Mr Hancock said: ‘I am asking NHS England and Improvement to take this advice forward and prioritise household contacts of the severely immunosuppressed for vaccination as you recommend.

‘My officials have also shared your advice with colleagues leading the Covid-19 vaccines programmes in each of the four nations of the UK.’

The most recent tweak to the vaccine priority list was the addition of all adults with learning disabilities in February, which came after a campaign by BBC radio DJ Jo Whiley, whose sister is learning disabled and caught Covid.

The JCVI added people in this group into priority group six.

Whiley praised the policy change as ‘absolutely crucial’ and said she was ‘delighted’. She said her 53-year-old sister Frances, who was hospitalised with the virus, was ‘doing great’ after recovering.

Anyone who is on the GP Learning Disability Register is now eligible for a vaccine, the JCVI said, regardless of how severe their disability is.

People with profound disabilities were already in group six but it now includes milder conditions, officials said, because the register may not differentiate between them.

This register is open to anyone with a diagnosed learning disability. These include autism and Asperger’s, William’s syndrome, global developmental delay and cerebral palsy.