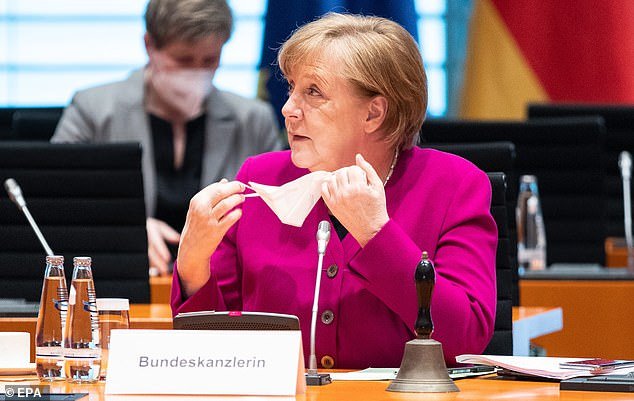 By Ross Ibbetson For Mailonline

The country is struggling to tackle a third wave of the pandemic and recorded an average of 15,000 cases every day for the last week – the fifth highest infection rate in Europe.

Chancellor Merkel’s spokeswoman today announced her boss was backing calls from several federal leaders for a short, sharp lockdown as the country tries to vaccinate as many people as it can.

It comes just two weeks after Merkel made a humiliating apology for the ‘mistake’ of trying to impose a five-day Easter lockdown and asking for the public to forgive her.

The Christian Democrat leader was forced to beat a swift retreat after she prompted uproar with her plan to close all shops from April 1 to April 5, Easter Monday.

But today, her spokeswoman, Ulrike Demmer told reporters that Germany had a rising number of intensive care patients and that ‘every call for a short, uniform lockdown is right.’

‘We need a stable incidence below 100,’ she said, referring to the number of cases over seven days per 100,000 inhabitants.

The incidence rate is currently 110.1, according to the Robert Koch Institute.

She also said that the government was looking at whether nationwide, rather than regional, measures were needed.

‘The range of regulations does not help acceptance,’ said Demmer. While some states have imposed night-time curfews over Easter, others are experimenting with some easing of restrictions.

The majority of Germany’s 16 federal state premiers was against bringing forward talks scheduled for April 12 on what action to take.

The number of confirmed coronavirus cases in Germany rose by 9,677 on Wednesday to more than 2.9 million, the Robert Koch Institute (RKI) for infectious diseases said.

It has warned that the numbers may not yet show the full picture as not all cases were registered over Easter. Some 77,401 people have died.