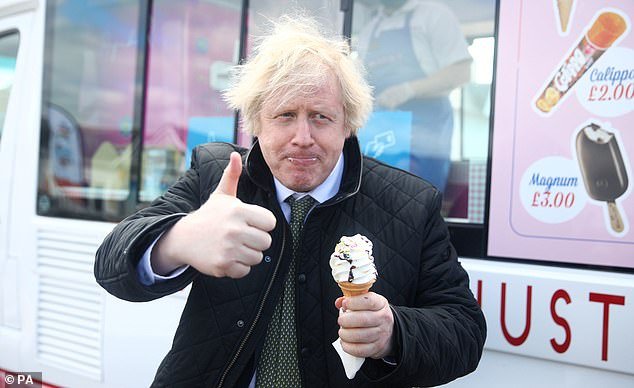 Boris Johnson today defended his vaccine passports plans as he vowed to proceed with the policy despite Sir Keir Starmer confirming Labour will side with Tory rebels to oppose the move.

The Prime Minister stressed that no documentation will be needed to access shops, pubs and restaurants in England on April 12 or May 17 – the next steps on his lockdown exit roadmap.

But looking beyond those dates, Mr Johnson said it is ‘responsible’ for the Government to consider how best to safely reopen society and ‘we will look at all possibilities’.

Sir Keir said this afternoon that the plans for the domestic use of ‘Covid Status Certification’ are ‘a complete mess’ and Labour is unable to support them ‘in their current form’.

The Labour leader said he feared the policy will become ‘another example of the Government with a plan that doesn’t work, costing lots of taxpayer money’.

This morning Paul Scully, the Small Business Minister, sparked speculation of a potential climbdown on the issue as he insisted the Government is ‘concentrating on ticketed, big events’.

Mr Scully said the work on vaccine passports is focused on major events which are ‘tougher to get back to a semblance of normal rather than the high streets’ and hospitality settings like pubs.

Some 40 Tory MPs have made clear they are against domestic vaccine passports, warning that introducing the checks in everyday life would create a ‘two tier’ nation.

The combination of Labour opposition and a 40-strong Tory rebellion has prompted speculation that Mr Johnson could lose a vote on the issue in the House of Commons.

He appeared to be handed a boost after Ian Blackford, the SNP’s Westminster leader, said his party would ‘look constructively at any proposals’ but Mr Blackford later insisted ‘on the basis of the information available, there is not a proposition in front of us that SNP MPs could support’.

It came as Jeremy Hunt, the Tory former health secretary and chairman of the Health Select Committee, said he believed the public will accept the documents if they are the ‘only way to socialise in public places safely’.

Sir Keir Starmer today confirmed Labour will not back domestic vaccine passports as he labelled Boris Johnson’s plans ‘a complete mess’. He is pictured in Plymouth with Labour MP Luke Pollard

The initial findings of a Government review on how the passports could be used left the door open to the documents being required for access to pubs and restaurants.

Many Tory MPs support the use of vaccine passports for international travel but are vehemently opposed to using them in everyday life because of privacy and civil liberties concerns.

The Government has said the documents would consist of a mix of vaccination, testing and immunity data.

The system will be trialled at a series of events pilots in the coming weeks but they will initially only check testing data.

Mr Johnson said during a visit to Cornwall that it would be ‘responsible’ for any government to look at the possibility of vaccine passports as he reiterated no such documentation will be needed on April 12 or May 17.

He said: ‘But clearly, it is going to be responsible for any government to look at the possibility of making sure that we can continue to open up all sectors of the economy in a safe way down the rest of this year and, you know, we will look at all possibilities.

‘But I have absolutely no doubt that we will continue with the road map that we set out in a safe and secure way, but nobody should think that there’s any need for certificates of any kind either on April 12 or May 17.’

Sir Keir said during a visit to Plymouth that Labour will not support the proposals as things stand.

He told reporters: ‘We do not support the Government’s plans in their current form, it’s as simple as that.

‘In fact the Government’s plans seem to be changing on an almost daily basis. Only a few weeks ago the Prime Minister was saying he was thinking of vaccine passports to go to the pub – now he says isn’t. One day he’s talking about tests – then it’s certificates. It’s a complete mess.

‘There isn’t a real plan around this and what I fear it will be is another example of the Government with a plan that doesn’t work, costing lots of taxpayer money, when I think the focus should be on getting as many people vaccinated as possible – that’s the light at the tunnel.’

Earlier today, Mr Scully was asked during an interview on Sky News what his understanding is of where the passports could be used and whether they could be used by small businesses.

‘What is being looked at is the entire gamut around the ethics and the practicalities of a certification programme, especially for ticketed events, bigger events and that is why it linked to the events research programme which is doing its work through this month and is due to report back next month.

‘So there is plenty of discussion, plenty of debate to look at before any decisions are taken.’

Pushed again on whether small businesses would likely have to deal with the passports issue, Mr Scully said: ‘Well, as I said, the work that is being done at the moment is concentrating on ticketed, big events and those kind of things because they are tougher to get back to a semblance of normal rather than the high streets with non-essential retail and hospitality including pubs.

‘That is where the work is being done at the moment. As I say there is a lot more work to be done, a lot more discussion and debate to be had on that over the coming weeks.’

There is considerable Tory disquiet over the potential use of domestic vaccine passports, with the PM under pressure to guarantee a vote in the Commons on the issue.

Mr Johnson’s fate would rest on the size of the Tory rebellion if Labour and the SNP opted to vote against the proposals.

Mr Blackford had appeared to offer Mr Johnson a boost after he told The Telegraph: ‘Obviously we’re keen to take steps to get back to normality, but in a way that is inclusive.

‘We would look constructively at any proposals that would help us get there, including Covid status checks. It is important that people are not excluded.

‘Therefore such checks would have to include people who have had a Covid test as well as those who are vaccinated.

‘When it comes to SNP MPs potentially voting on such matters in Westminster, these measures will affect Scots visiting friends or for work in England.’

Mr Blackford subsequently said that as things currently stand the SNP will not support the domestic plans.

He said: ‘The UK government hasn’t published any proposals yet, and the Tory position has been mired in confusion and contradiction. On the basis of the information available, there is not a proposition in front of us that SNP MPs could support.’

Despite the high levels of opposition in Westminster to the idea of domestic vaccine passports, Mr Hunt said he believed the public would accept them.

He told BBC Radio 4’s Today programme: ‘Well, in normal times if you were being asked to show your health records or your Covid status before going into a pub or something like that it would be absolutely abhorrent.

‘But this is a pandemic. Now, it may not be necessary to do any of that if the vaccine programme is as successful as we hope and if cases fall to low enough levels.

‘But if the only way to socialise in public places safely is to ask people to demonstrate that they are not likely to be a risk to others then I think people are quite sensible and pragmatic about this kind of thing.’

The initial findings of a Government review on the certification scheme said the documents could have an ‘important role to play both domestically and internationally, as a temporary measure’.

The Government ruled out using the documents to determine access to public transport or essential shops.

But the findings said ‘it is possible that COVID-status certification could also play a role in reducing social distancing requirements in other settings which people tend to visit more frequently, for example in hospitality settings’.