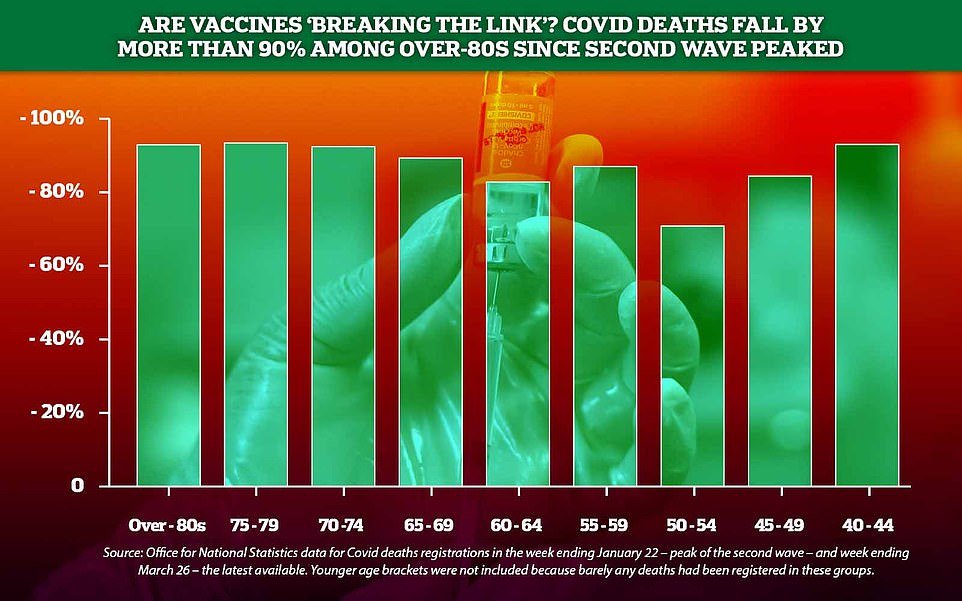 Over-80s Covid deaths have fallen by more than 90 per cent since the peak of the second wave in England and Wales, official figures revealed today.

Office for National Statistics data showed 379 fatalities were linked to the virus in the most elderly group in the week ending March 26 — compared to 5,354 during the darkest period of January.

It comes after a major surveillance study suggested jabs were ‘breaking the link’ between cases and deaths, saying Covid fatalities were falling as infections plateaued – which was not seen during the first or second wave.

Everyone over 60 has been offered at least one dose of the Covid vaccine in England and Wales, and Department of Health figures show more than 31million Britons – or three in five adults – have received a jab.

ONS statistics also revealed the number of deaths linked to Covid fell by a quarter in the final week of March, after 719 were recorded compared to 963 in the previous seven-day spell.

And fatalities from all causes – including dementia, heart disease and Covid – remained below the five-year average for the third week in a row. Experts warned they would drop below the number expected because many the pandemic had led to many people dying earlier from the virus or due to disruptions in routine healthcare.

Care home residents fatalities linked to the virus also fell by almost a quarter in the last two weeks of March, dropping from 195 to 150, and deaths remained below average for the sixth week in a row.

The ONS weekly report is compiled after statisticians leaf through mountains of death certificates to identify all those linked to the virus, meaning their estimates lag behind by about two weeks.

The Department of Health, on the other hand, publishes daily estimates of Covid deaths based on figures submitted by hospitals and other healthcare providers – but it is thought these do not capture all fatalities linked to the virus. 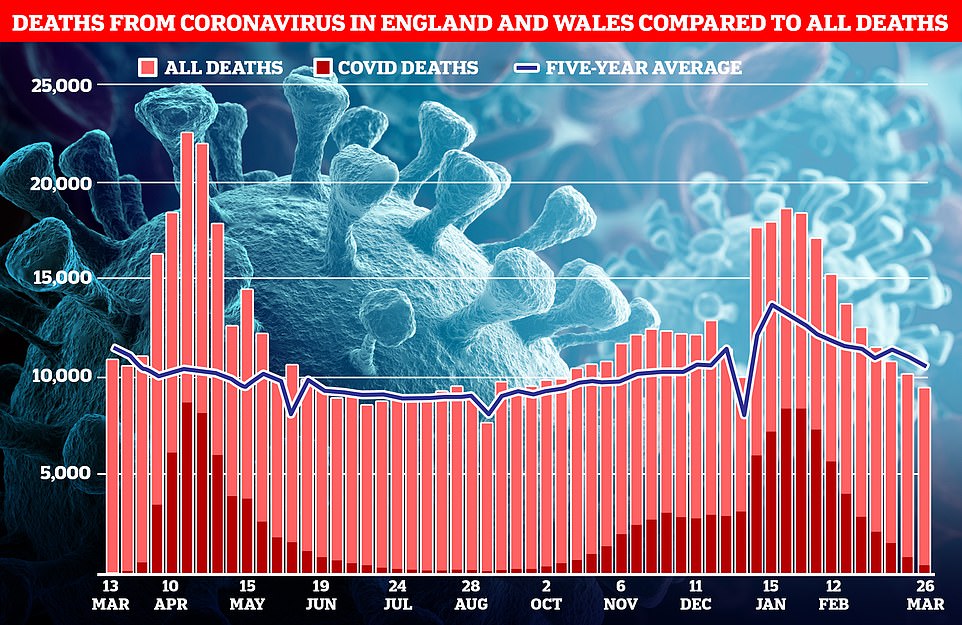 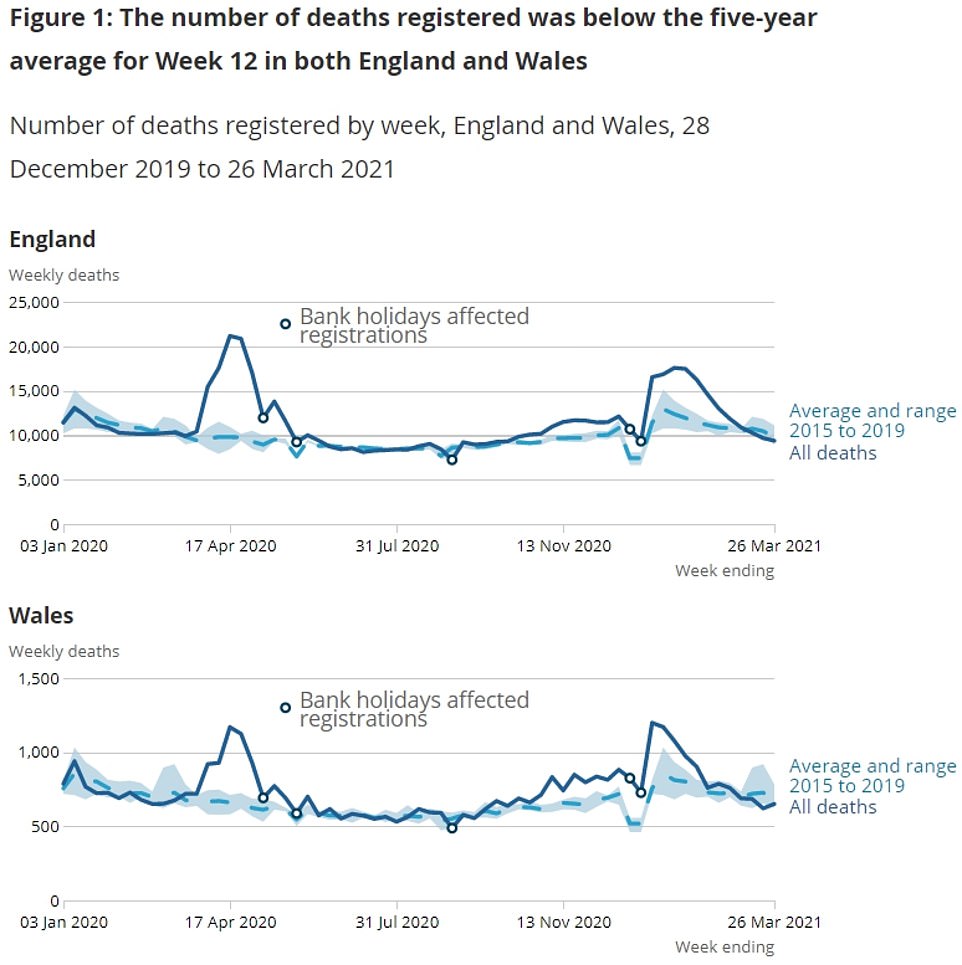 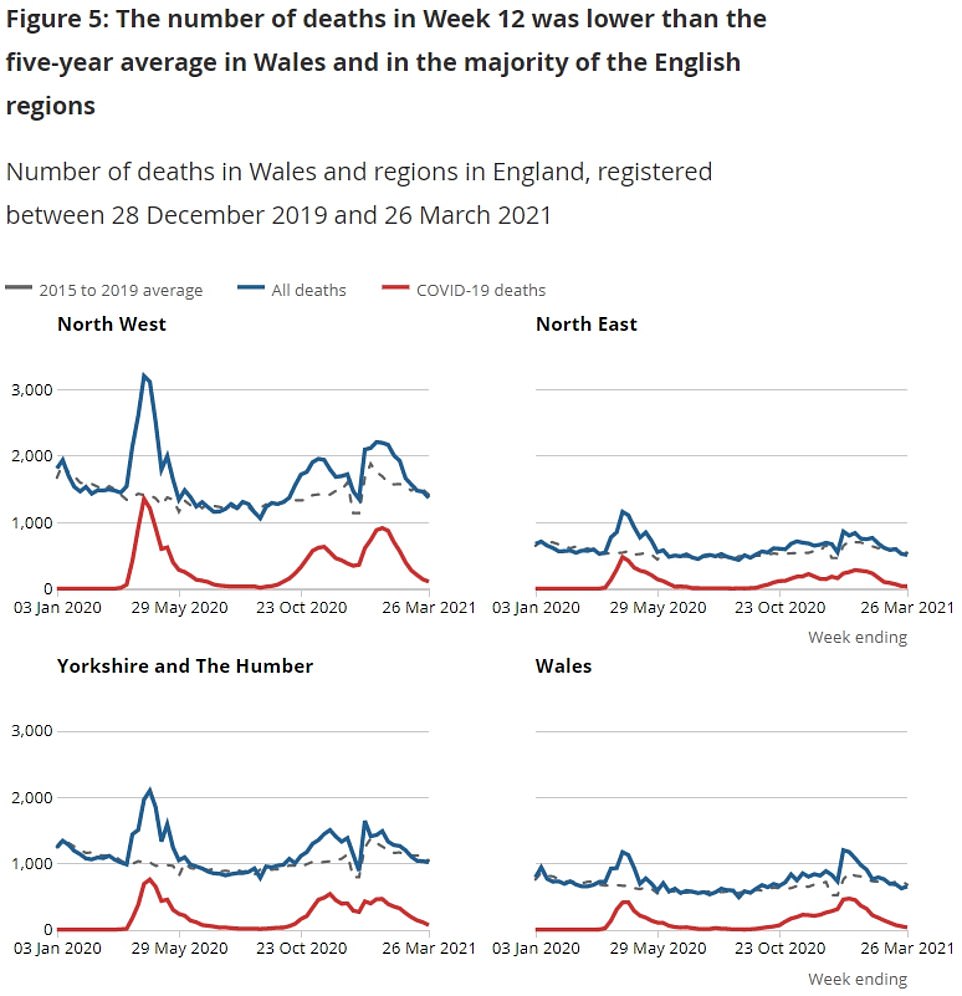 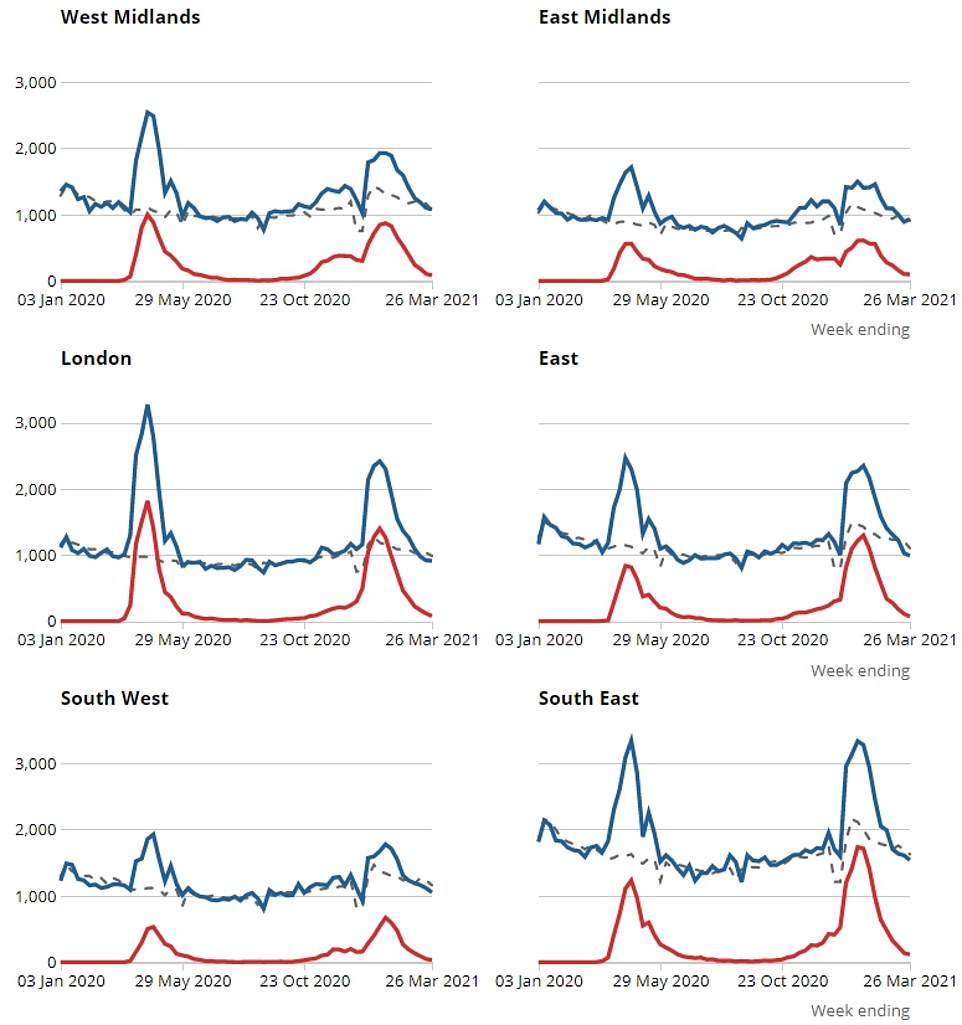 FAMILY OF SOLICITOR, 59, WHO DIED FROM BLOOD CLOT AFTER ASTRAZENECA JAB URGE PEOPLE TO GET THE JAB

The sister of a married lawyer who died from a blood clot after receiving the AstraZeneca vaccine today joined the legion of politicians and health experts encouraging people to continue taking up the jab and said: ‘My brother was just extraordinarily unlucky’.

Neil Astles, 59, who lived in a £275,000 detached house in Newton-le-Willows on Merseyside, became the UK’s first named victim after passing away last weekend following 10 days of severe headaches and a steady loss of vision.

Mr Astles, who married his wife Carole in 1993 and worked as a council solicitor in nearby Warrington, died on Easter Sunday.

His sister Dr Alison Astles, a pharmacist at the University of Huddersfield, said her brother was a keen runner, was ‘fit and healthy’ and had no history of blood clots.

But he developed a headache about a week after his vaccination March 17. When his headaches and eyesight worsened, he was rushed to A&E at the Royal Liverpool Hospital by his brother, before being admitted to intensive care, where he died more than a fortnight later.

Dr Astles told the Daily Telegraph: ‘Despite what has happened to our family, we strongly believe that everyone should go for their first and second doses of the AstraZeneca vaccine. Emotionally, we are completely and utterly furious. We are suffering. But there’s nothing in our minds to be really furious about. My brother was just extraordinarily unlucky.’

When the ONS figures were broken down by age, they showed over-80s who are most at risk of hospitalisation and death if they catch the virus have seen their fatalities drop by 92 per cent since the peak of the second wave.

The drops in Covid deaths were not calculated for younger age groups because the risk they face from the virus is so low very few fatalities have been recorded.

Vaccines are being rolled out to everyone aged between 50 and 54 in England after the NHS successfully offered a first dose to all those in older age groups and the top priority groups.

In Wales shots are now being offered to the over-40s, after health authorities met their target of getting jabs to older people and priority groups before mid-April.

In a major boost to the country’s vaccine drive, the Moderna Covid vaccine was dished out in the UK for the first time yesterday after Wales expanded its roll-out.

Britain has ordered 17million doses – enough for 8.5million people – but these are expected to be reserved for the under-30s after the regulator said this age group should be offered an alternative to the AstraZeneca jab.

It comes after Imperial College London epidemiologists found while Covid infections appeared to have levelled off in early April, fatalities linked to the virus were still falling — which would not have been expected during the first or second wave. They said this signalled how the successful vaccine roll-out may already be beating the virus.

They modelled their Covid infection rate estimates onto official tallies of deaths and hospitalisations linked to the virus to get the results, revealing that while there was a ‘clear association’ during the first wave but these appeared to have diverged from January – as the roll-out sped up.

Professor Steven Riley, an infectious disease modeller involved in the study, said: ‘From September onwards we get this really nice agreement between hospitalisations and deaths and underlying infections.

‘But the thing we are reporting today is if you look at this pattern from January onwards you’re seeing a pretty consistent divergence.

‘We think this is a signal of how the vaccination programme is breaking the previously strong link between the pattern of infections and the pattern of deaths and hospitalisations.

He added on Times Radio: ‘We’re getting fewer deaths now than before we started the vaccine campaign.

‘The lockdown is certainly contributing to the drop in infections that we’re also reporting today, that’s for sure, but it’s unlikely that that link between infections and deaths is being driven solely by the lockdown.’ 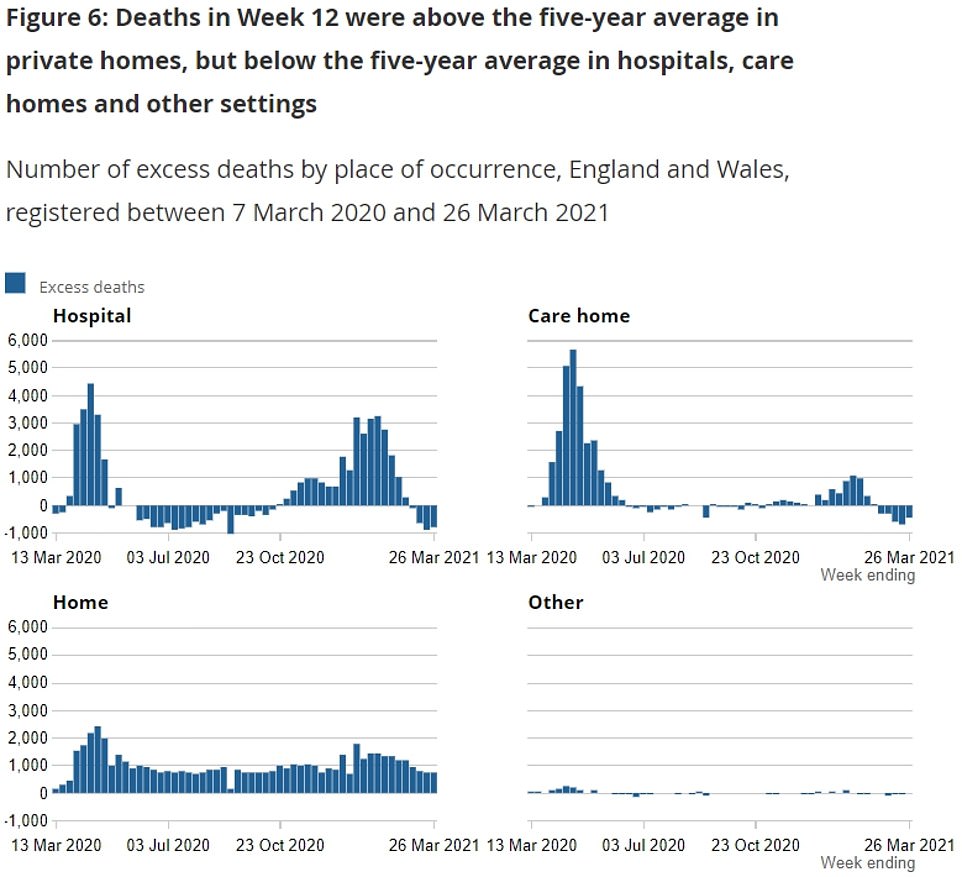 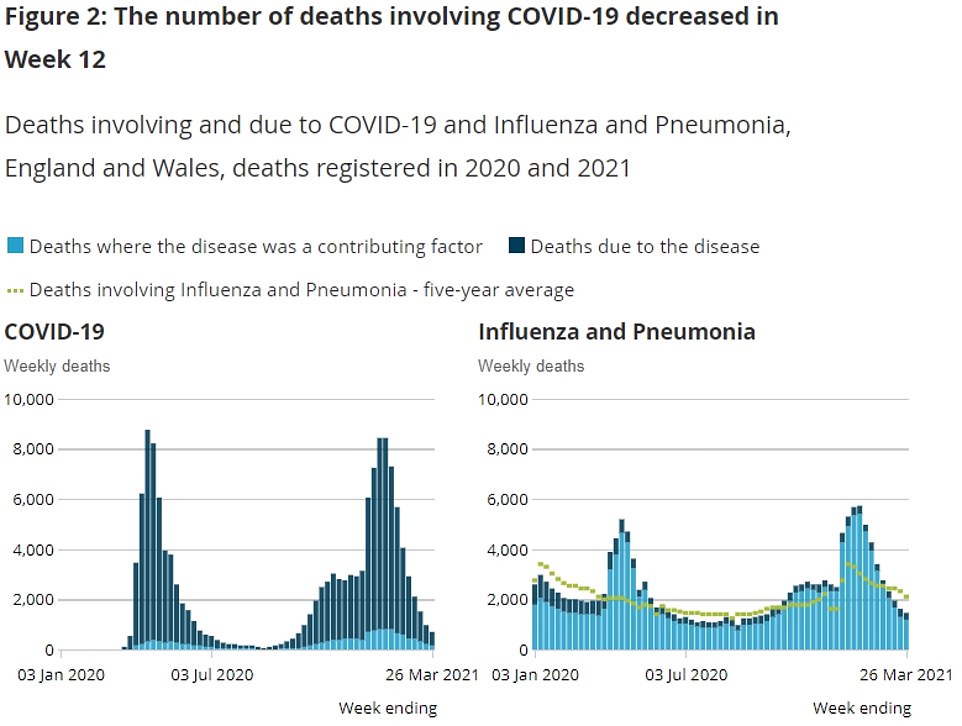 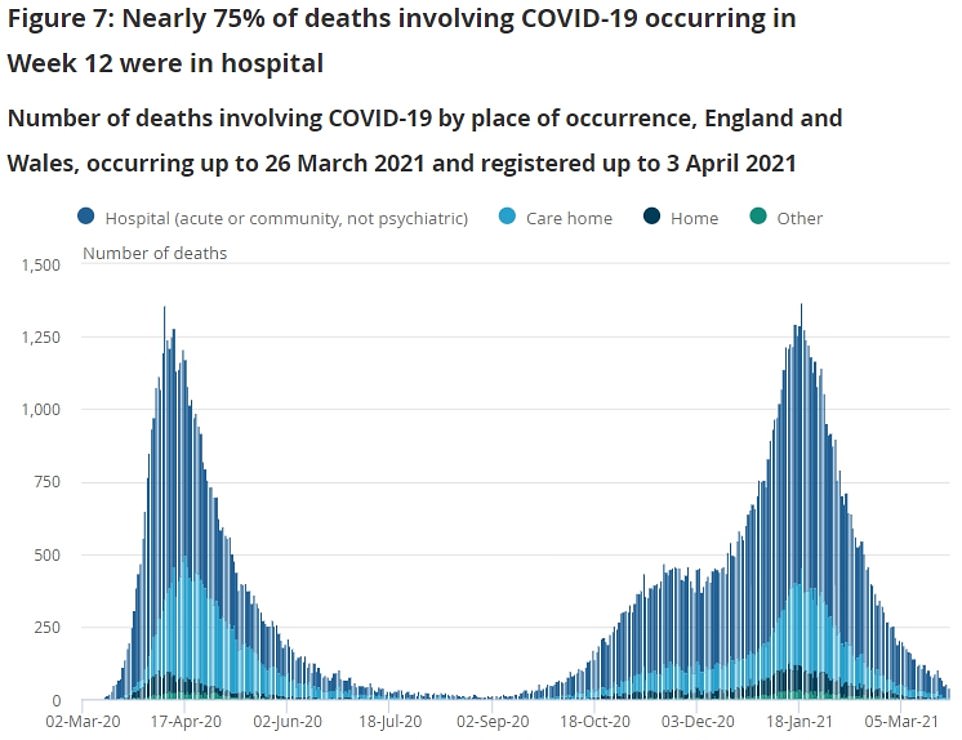 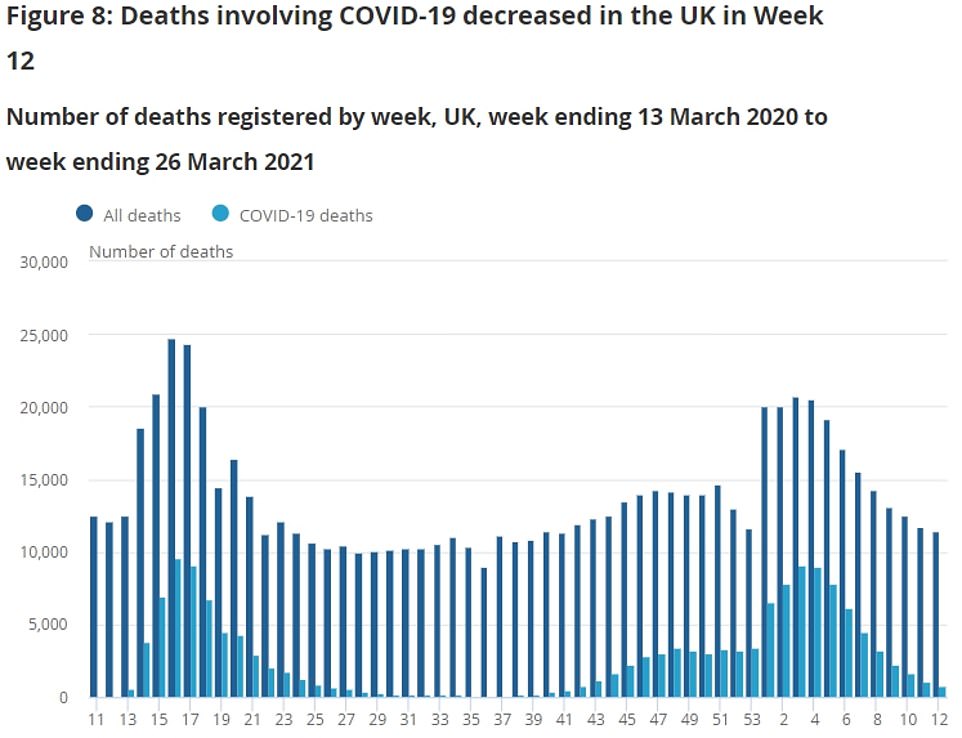