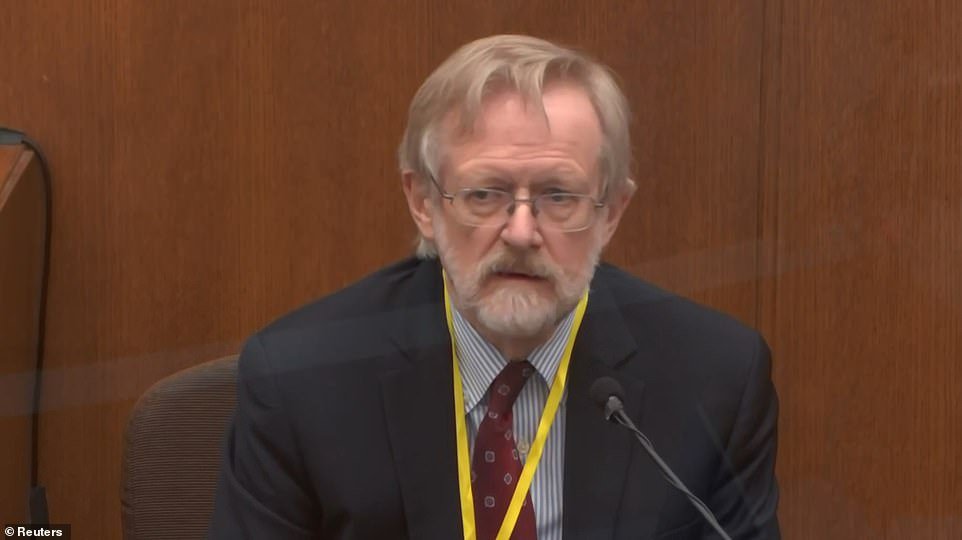 A medical expert who specializes in pulmonology has told jurors in Derek Chauvin’s murder trial that George Floyd died from a ‘low level of oxygen’ that damaged his brain and caused his heart to stop when he was pinned to the street by Minneapolis police officers.

Dr Martin Tobin, who has been a lung and critical care specialist for more than 45 years, was the first to testify for the prosecution on Thursday on what has become the most contested issue of Chauvin’s trial so far: Floyd’s cause of death.

During his testimony, Dr Tobin told jurors Floyd’s breathing had become so shallow his lungs could not provide enough oxygen to his head and heart.

Dr Tobin said there were four forces that caused this fatal shallow breathing: The fact that Floyd was turned prone on the street, had his hands cuffed behind his back and had a knee on his neck and on his back.

The defense has claimed from the start that Floyd’s death was due to the impact of drugs, stuffed into his mouth in the moments prior to his arrest on May 25, 2020.

Dr Martin Tobin was the first to testify for the prosecution on Thursday on what has become the most contested issue of Chauvin’s trial so far: Floyd’s cause of death 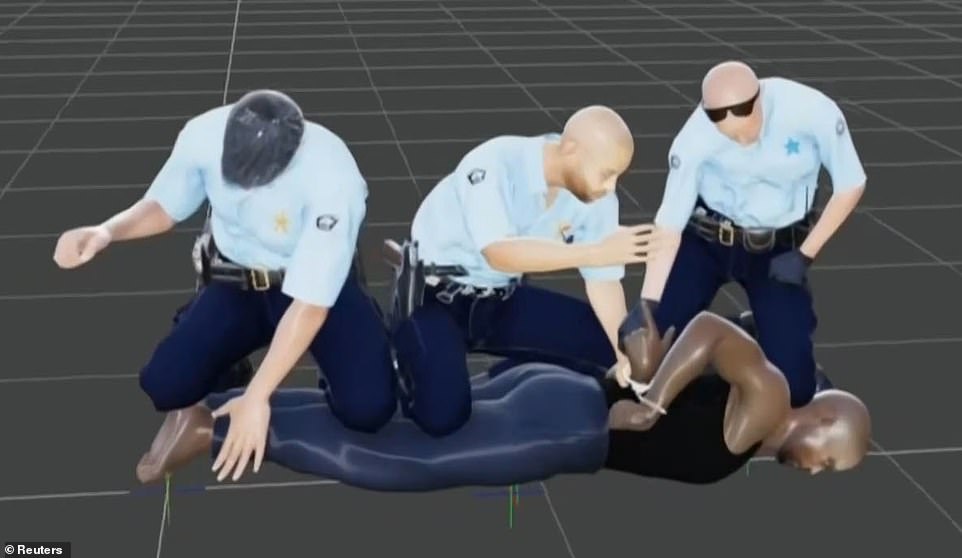 When asked if Dr Tobin, based on his medical expertise, had determined a cause of death for Floyd after viewing videos, he said: ‘Mr Floyd died from a low level of oxygen.

‘The cause of low level of oxygen was shallow breathing. Small breaths that weren’t able to carry the air through his lungs.’

In one horrific moment, he told the court that the impact of the pressure of the officers and handcuffs rendered movement so impossible that ‘basically on the left side of his lung it was almost to the effect of if a surgeon had gone in and removed his lung.’

The court was shown a graphic – a ‘snapshot in time’ – depicting the officers’ positions on Floyd.

Dr Tobin explained that he had focused on the first 4 minutes and 3 seconds of time as that was the point at which Floyd started to show signs of brain damage. 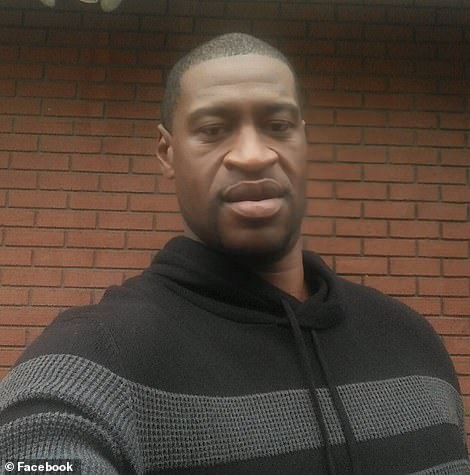 Chauvin, 45, is accused of killing Floyd by pinning his knee on the 46-year-old black man’s neck for 9 minutes, 29 seconds, as he lay face-down in handcuffs after being detained for using an alleged counterfeit $20 bill to buy cigarettes

Using this graphic, Dr Tobin told them of the horrific impact of the handcuffs and the street – two forces that conspired to hold Floyd’s chest in ‘a vice.’

He explained: ‘It the positioning [of the handcuffs] then how he’s manipulated by both officers Chauvin and Keung, and they’re pushing the handcuffs into his back and pushing them high.

This meant that Floyd’s lungs and chest could not move front to back movement – a vital motion of breathing.

Nelson has made much of ‘camera perspective bias,’ using the notion to suggest that Chauvin’s knee was not on Floyd’s neck all, if any, of the time.

Dr Tobin said that by his calculations Chauvin’s left knee was, ‘virtually on his neck for the vast majority of the time.’

As for his right knee, Dr Tobin, said that it was on Floyd’s back for 57% of the time – the time when he could get a clear view.

‘At other times it was placed on his arm and then rammed into Mr Floyd’s left chest so really if you’re making a distinction on whether his knee is on the chest per se or on the left arm and rammed into the chest, from the point of view of breathing the effects are very similar.’ 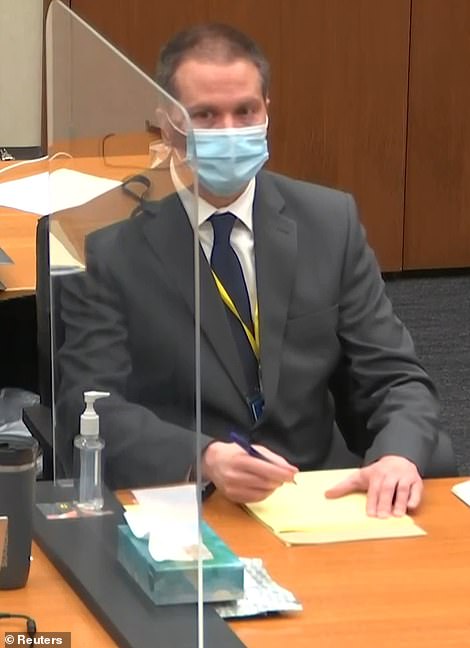 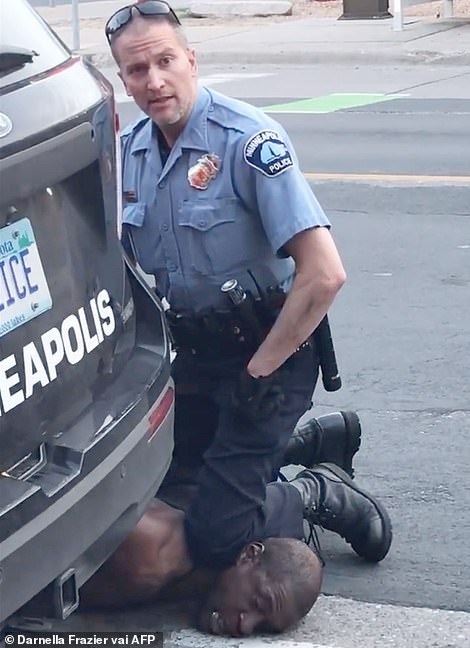 Chauvin, 45, is charged with murder and manslaughter after being accused of pinning his knee on Floyd’s neck for nine minutes and 29 seconds in May last year

Chauvin, 45, is charged with murder and manslaughter after being accused of pinning his knee on Floyd’s neck for nine minutes and 29 seconds in May last year.

He has pleaded not guilty, arguing that he did only what he was trained to do in his 19 years as an officer.

Chauvin was fired by the city’s police department the day after he was captured on video kneeling on a handcuffed Floyd’s neck after he was detained for using an alleged counterfeit $20 bill to buy cigarettes.

The trial so far has been filled with testimony from a number of Minneapolis police officers who rejected Chauvin’s actions in restraining Floyd.

A use-of-force instructor testified that officers were coached to ‘stay away from the neck when possible’ and other experienced officers, including the police chief, said Floyd should not have been kept pinned to the pavement for so long with his hands cuffed behind his back.

Other testimony so far during the trial has come from emotional witnesses, including Floyd’s girlfriend Courteney Ross and bystanders who saw everything unfold.

In addition to the testimony, the prosecution has also introduced multiple videos, including footage from Chauvin’s body camera, and images of EMTs trying to resuscitate Floyd in an ambulance.