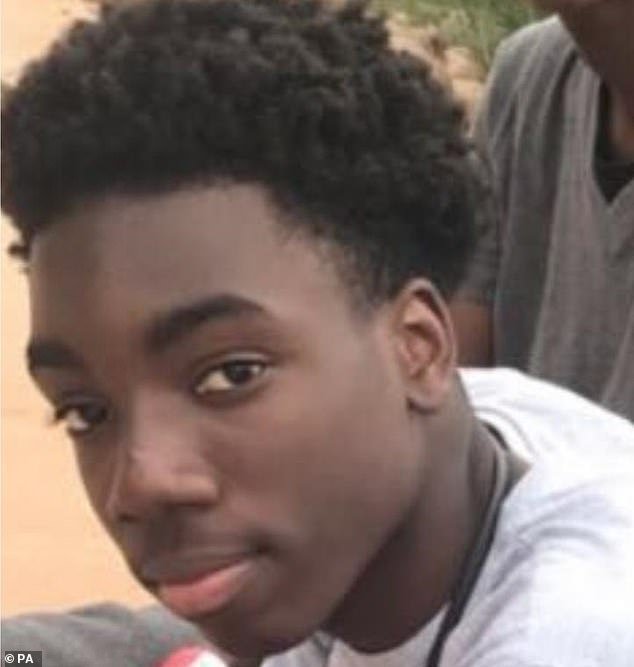 The mother of Richard Okorogheye says her heart ‘feels as if it has been ripped apart’ after police confirmed last night it was his body found in a lake in Epping Forest.

Officers from Essex Police found the body on Monday but the remains were only formally identified as the 19-year-old’s yesterday.

It comes as it emerged today that the Met has been referred to the police watchdog over its handling of the case.

In missing persons cases, a referral to the Independent Office of Police Conduct (IOPC) as well as its own internal Directorate of Professional Standards (DPS) is mandatory and routine when that individual’s death is confirmed.

The IOPC told the BBC it would look to see if any ‘future involvement is required’.

Richard’s mother, Evidence Joel, alleged at the time of her son’s disappearance that police asked ‘if you can’t find your son, how do you expect us to?’ when she went to them for help.

However, this is not the subject of the referral and MailOnline understands no formal complaints have been made against the force over its handling of the case.

After a post-mortem on the body was carried out yesterday, detectives said they do not suspect any third-party involvement in his death ‘at this stage’.

This morning, Ms Joel wept as she told Sky News how she is ‘completely hollow and devastated and empty’ having been told the news.

‘At this moment of time I just want answers as how my son lost his life. I want answers. I desperately need closure,’ she added.

Police have confirmed the body of a man discovered in a pond in Epping Forest is Richard Okorogheye, 19, pictured

Hala Mohamed, who has known Richard, 19, since birth (pictured together), admitted she was struggling to come to terms with the events of the last two weeks, since he disappeared after leaving his family home in the Ladbroke Grove area of west London

The grieving mother revealed how she had been to the site of the discovery to lay flowers in her son’s memory.

She also admitted she was puzzled by the police conclusion that nobody else was involved in the death, insisting it was too far for Richard to walk alone into such darkness.

‘So how did he get there? What happened? We don’t know. I feel something happened there.’

It comes after a GoFundMe page was launched to provide financial support for Ms Joel following the tragedy. A target of £1,000 was initially set but more than £7,000 has already been raised in just 14 hours since the page was set up.

Organiser Rustam Wahab wrote: ‘No amount of money can replace a loved one, the next months and years for Richard’s Mum will be incredibly difficult.

‘That is why, whilst she grieves I want us to be able to support her financially, so she has one less thing to worry about.’

According to Scotland Yard: ‘Formal identification has now taken place and the body has been confirmed as that of 19-year-old Richard Okorogheye.

‘Richard went missing from his home in Ladbroke Grove on Monday, March 22. He was reported missing on Wednesday, March 24.

‘His next of kin have been informed and are being supported by specialist officers.’

Officers are currently treating his death as ‘unexplained’ and detectives do not believe there was any third party involvement.

The post mortem did not find any evidence of physical trauma or assault.

Detective Superintendent Danny Gosling, Head of the Met’s Central West Public Protection Unit, said, ‘My deepest sympathies go out to Richard’s family at this incredibly difficult time. This was not the outcome that any of us had hoped for and we will ensure that his grieving family are well-supported by specially trained officers.

‘I would like to extend my thanks to the many officers, staff and members of the public who have each played a part in the extensive effort to locate Richard.’

The investigation into the circumstances of Richard’s death is ongoing.

Community nurse Evidence Joel, 39, (pictured) told the Evening Standard : ‘We thought Richard would be found or would just come home. But he’s not. My baby will never come home to his mummy again’

Mayor of London Sadiq Khan sympathised with Mr Okorogheye’s family. He wrote on Twitter: ‘Londoners across our city will be holding the family and friends of Richard Okorogheye in our hearts tonight. My deepest sympathies go out to his loved ones at this truly tragic time.’

Home Secretary Priti Patel said her ‘thoughts and prayers’ were with the family of Richard Okorogheye and that she was in contact with Scotland Yard as inquiries into the 19-year-old’s death continue.

She wrote on Twitter: ‘I am deeply saddened to hear of the death of Richard Okorogheye.

‘My thoughts and prayers go to his family and friends at this incredibly difficult time.

‘I am in contact with the Metropolitan Police who continue their inquiries into his tragic death.’

Metropolitan Police officers at the scene at the Wake Valley pond in Epping Forest following the discovery of a man’s body. April 6

Metropolitan Police at the scene at Wake Valley pond in Epping Forest following the discovery of a man’s body. Richard Okorogheye’s mother was told the body matches his description

His mother Evidence Joel, 39, has previously said that her son had spoken of ‘struggling to cope’ with university pressures and had been shielding during the Covid-19 lockdown.

‘I think he went to meet somebody. Definitely. Richard cannot go there. Especially at that time in the morning … someone was waiting for Richard.’

Ms Joel and Mr Okorogheye’s friend Hala Mohamed, 18, travelled to the Epping Forest yesterday to lay flowers at the scene where his body was recovered.

Floral tributes were left behind while the small group said prayers.

Ms Joel, who was wearing a black coat and face mask, was supported by a group of friends and family as she broke down into tears.

Police divers have been seen searching a pond in Epping Forest as part of the investigation into the disappearance of 19-year-old student Richard Okorogheye. Pictured: April 2

Police divers were deployed to search ponds in the woodland in north-east London. April 1

As someone with sickle cell disease, Mr Okorogheye would only leave the house to go to hospital for regular blood transfusions for his condition.

Initial police inquiries identified Mr Okorogheye leaving his home address and heading in the direction of Ladbroke Grove at around 8.30pm.

In a previously confirmed sighting on Monday March 22, Mr Okorogheye was seen boarding the number 23 bus southbound in Ladbroke Grove at 8.44pm.

CCTV footage shows he was wearing all black and had a black satchel bag with a white Adidas logo, worn across his lower back.

Police said further inquiries have established that he then took a taxi journey from the W2 area of London to a residential street in Loughton.

He was captured on CCTV walking alone on Smarts Lane, Loughton, towards Epping Forest at 12.39am on Tuesday March 23.

On Thursday, the force said Mr Okorogheye’s phone has not been in use since his disappearance.

On March 22, Mr Okorogheye was seen boarding the 23 bus southbound in Ladbroke Grove at 8.44pm. CCTV shows he was wearing all black and a black satchel bag with white Adidas logo

Mr Okorogheye was seen boarding the 23 southbound bus in Ladbroke Grove at 8.44pm on March 22