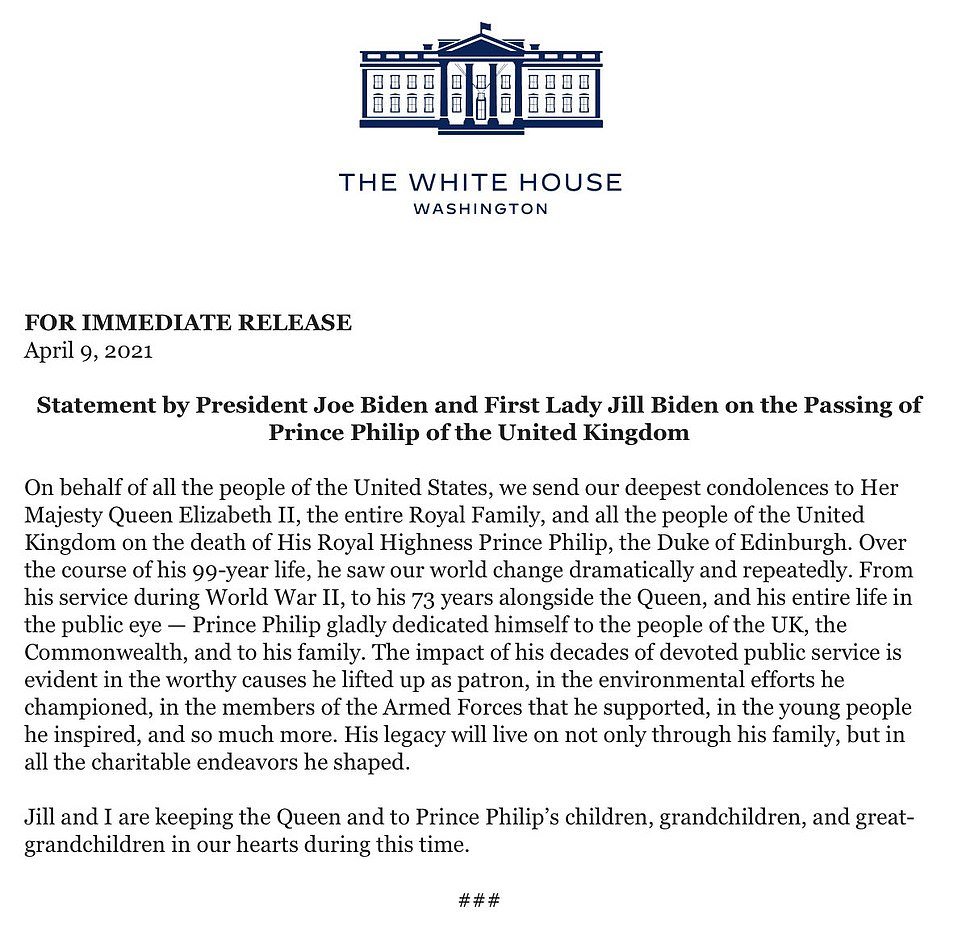 Joe Biden led tributes to Prince Philip from US Presidents on Friday morning, saying his legacy ‘will live on’ long after his death at the age of 99.

Prince Philip died on Friday, peacefully at Windsor Castle, 74 years after marrying Queen Elizabeth II and 68 years after her coronation. During his extraordinary life, he saw 13 different presidents serve in the Oval Office, and has outlived many of them.

When the Queen ascended to the throne in 1953, President Dwight Eisenhower was in office.

Since then, JFK, Johnson, Nixon, Ford, Carter, Reagan, George H.W., Clinton, Bush, Obama, Trump and Biden have taken office. Prince Philip met them all apart from Trump and Biden. When Trump visited the UK in June 2019, Prince Philip had already retired from royal duties, so did not take part in the state dinner.

Biden released a statement saying: ‘Over the course of his 99-year life, he saw our world change dramatically and repeatedly. From his service during World War II, to his 73 years alongside the Queen, and his entire life in the public eye – Prince Philip gladly dedicated himself to the people of the UK, the Commonwealth and to his family.

‘His legacy will live on not only through his family, but in all the charitable endeavors he shaped.’

Later, in the Oval Office, he said he was ‘one heck of a guy’ and added ‘he will be missed’.

‘I think he’s going to be missed, particularly in the United Kingdom. 99 years old and never slowed down at all which I admire the devil out of,’ he said.

Trump never met Philip but nonetheless shared a heartfelt tribute which read in part: ‘The world mourns the passing of Prince Philip, a man who embodied the noble soul and proud spirit of the United Kingdom and the Commonwealth. 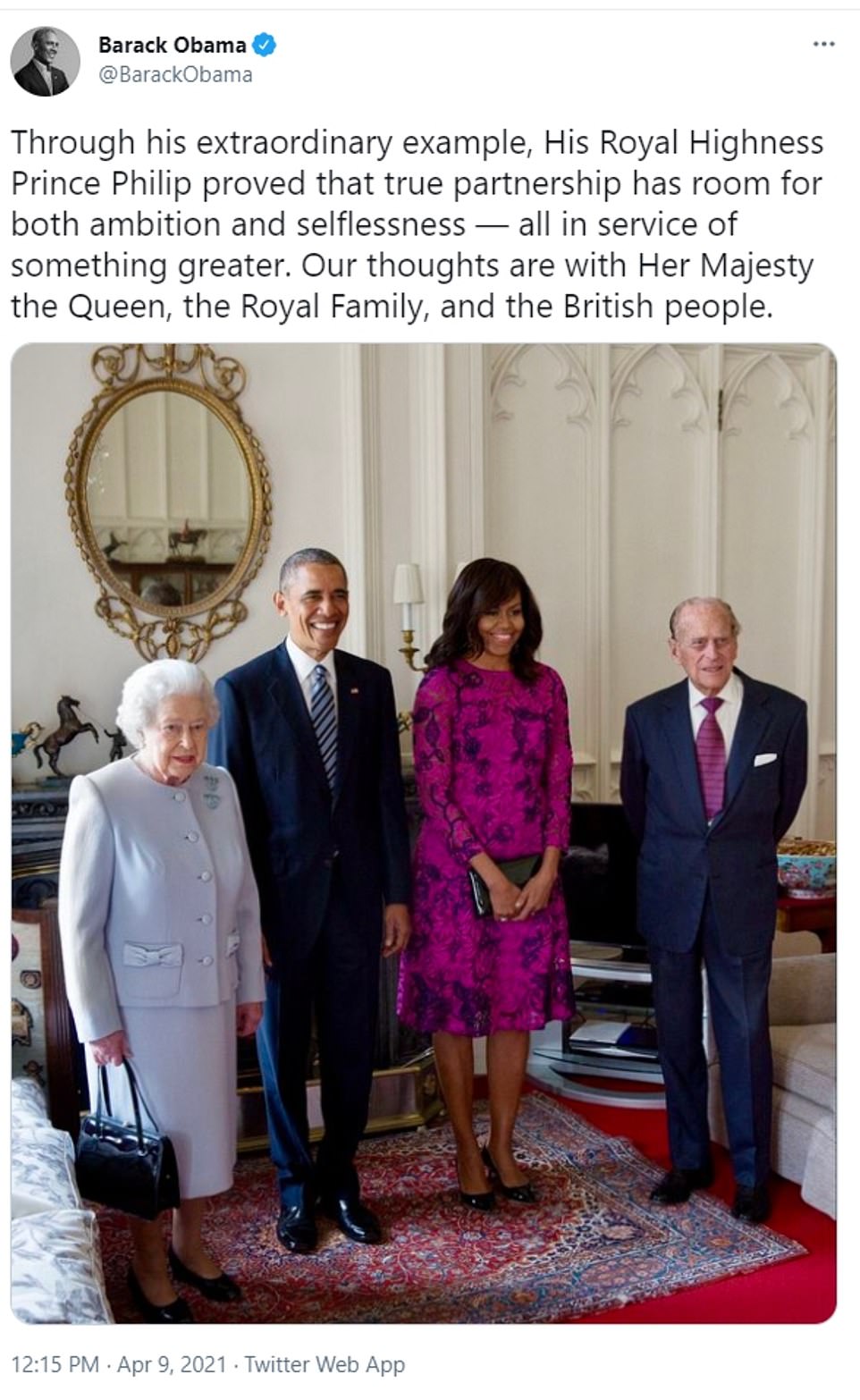 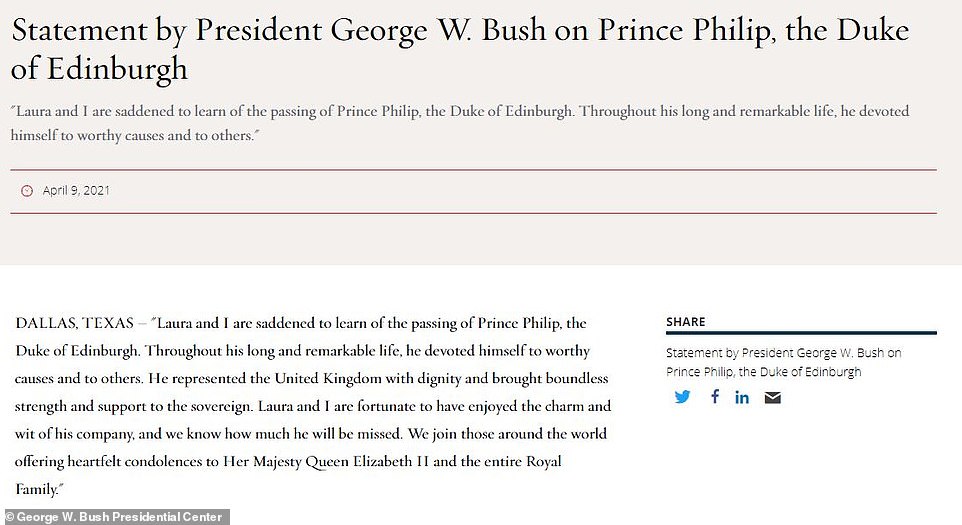 Former Presidents George W. Bush and Jimmy Carter led the U.S. in paying tribute to Price Philip, who died overnight at the age of 99

‘Melania and I send our deepest and most profound condolences to Her Majesty Queen Elizabeth II, and to the entire Royal Family. We send our most heartfelt sympathies to the British people. This is an irreplaceable loss for Great Britain, and for all who hold dear our civilization.

He honored Philip’s military service and service to the Queen, concluding: ‘As we grieve his loss, we celebrate his memory and rededicate ourselves to the values to which he devoted his extraordinary life. He will be greatly missed.’

Barack Obama tweeted earlier in the day: ‘Through his extraordinary example, His Royal Highness Prince Philip proved that true partnership has room for both ambition and selflessness — all in service of something greater.

‘Our thoughts are with Her Majesty the Queen, the Royal Family, and the British people.’

They both shared a photograph with the Queen and Prince Philip that was taken in 2016 at the Queen’s birthday lunch at Windsor Castle.

President Joe Biden said in a statement: ‘Prince Philip’s legacy will live on not only through his family, but in all the charitable endeavors he shaped. 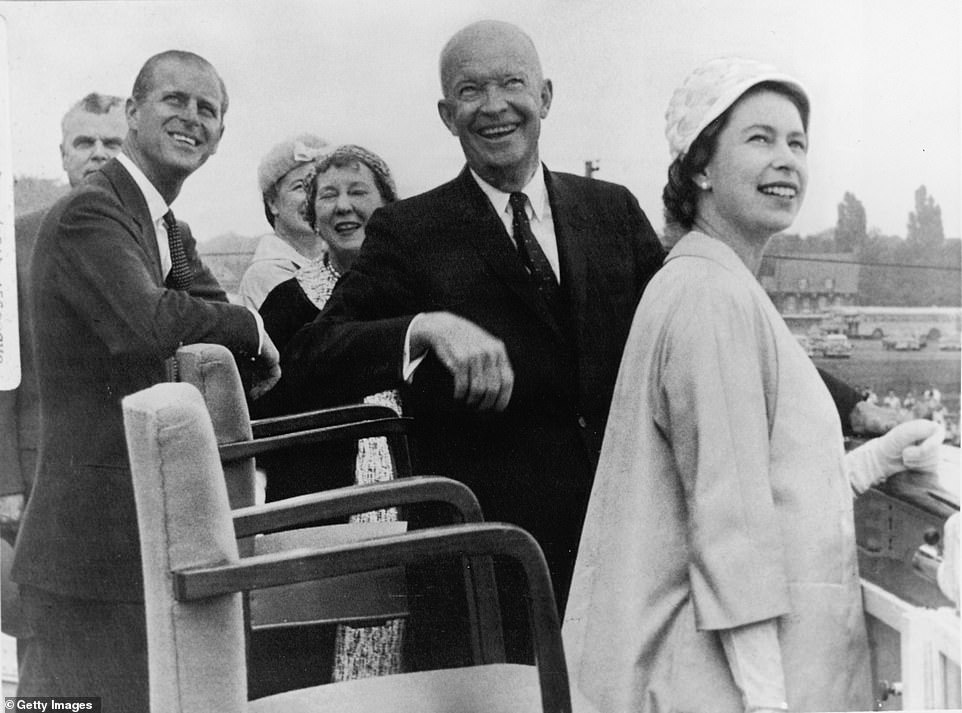 Prince Philip with President Eisenhower, Mamie Eisenhower and the Queen at the opening of the St. Lawrence Seaway in 1959 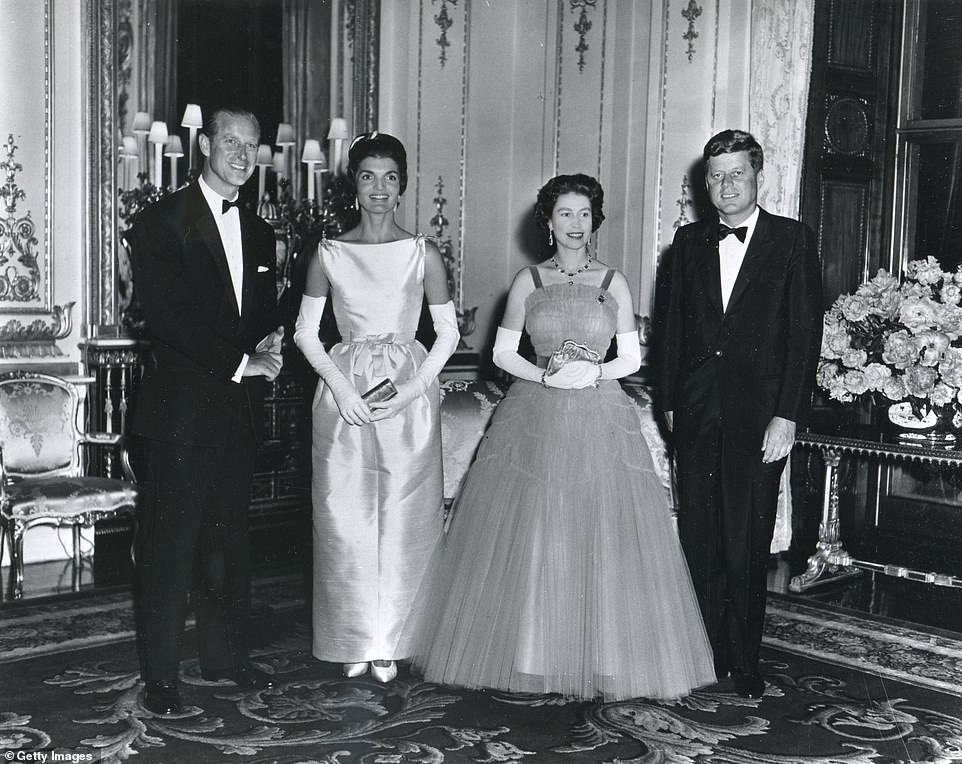 Prince Philip and the Queen with JFK and Jackie Kennedy at Buckingham Palace in 1961. JFK was killed two years later 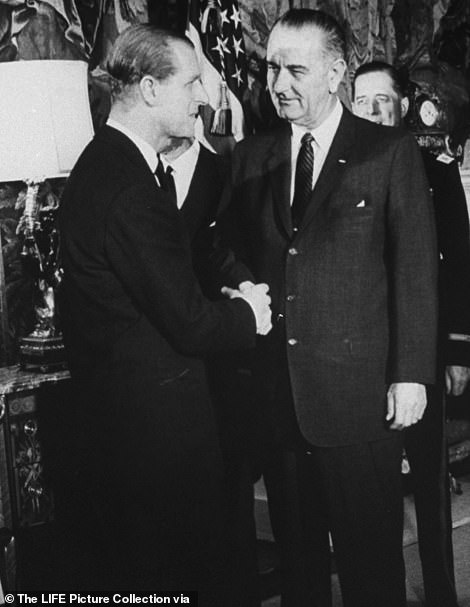 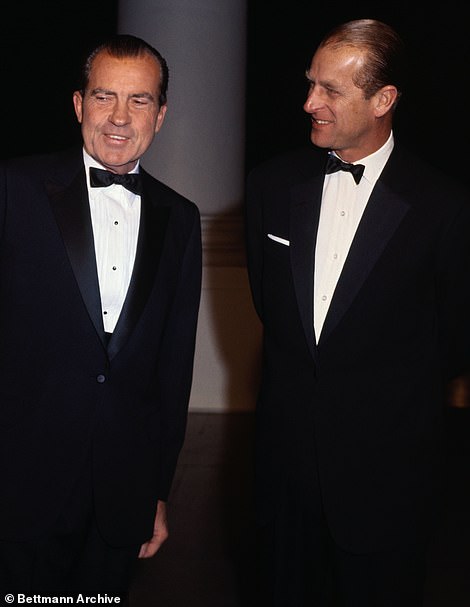 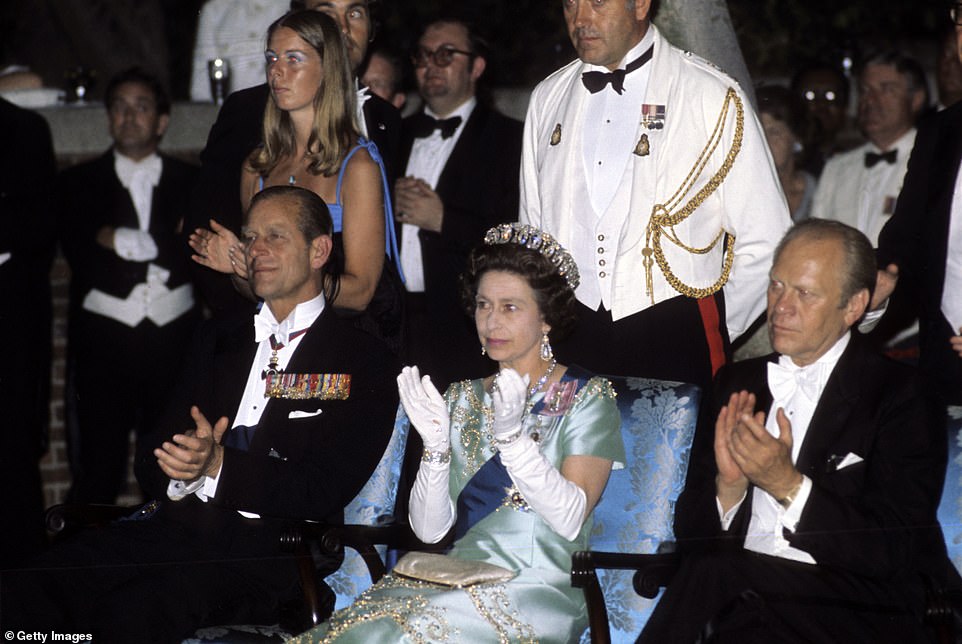 Queen Elizabeth ll and Prince Philip, Duke of Edinburgh with with President Gerald Ford during a State Visit on July 29, 1976 in Washington, DC 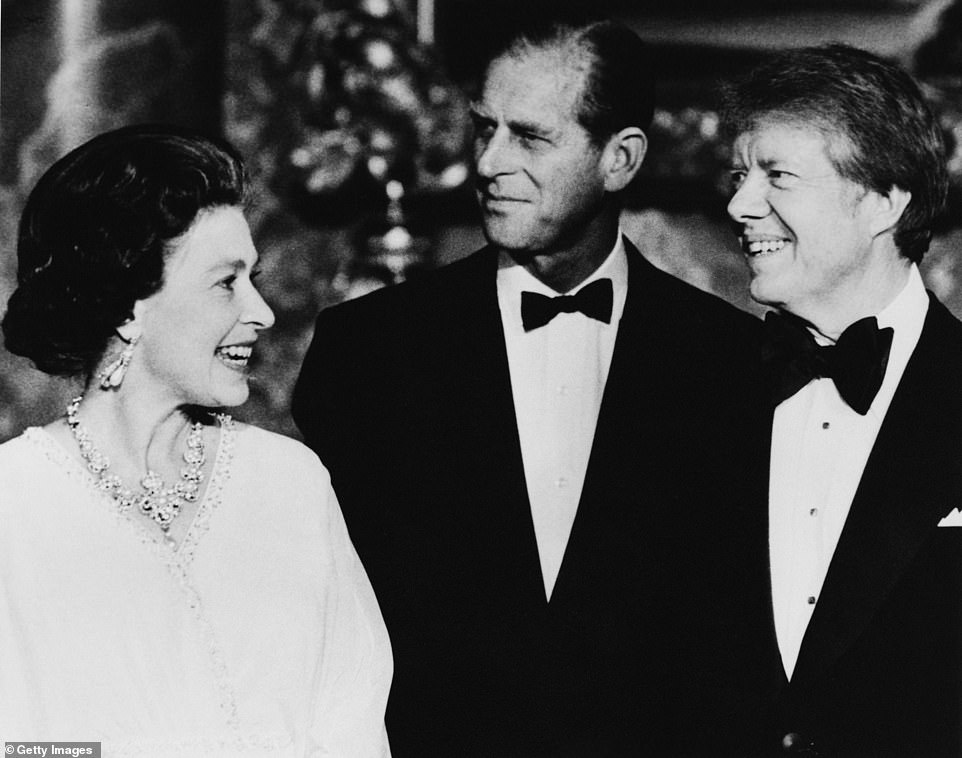 Queen Elizabeth II and Prince Philip with US President Jimmy Carter in the Blue Drawing Room at Buckingham Palace, London, 10th May 1977 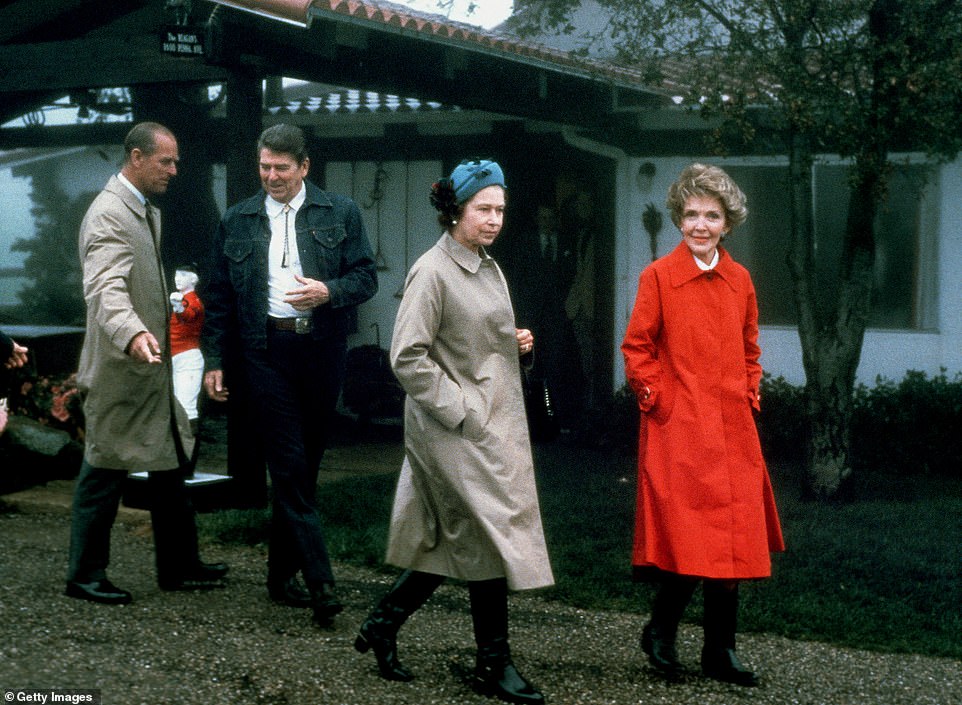 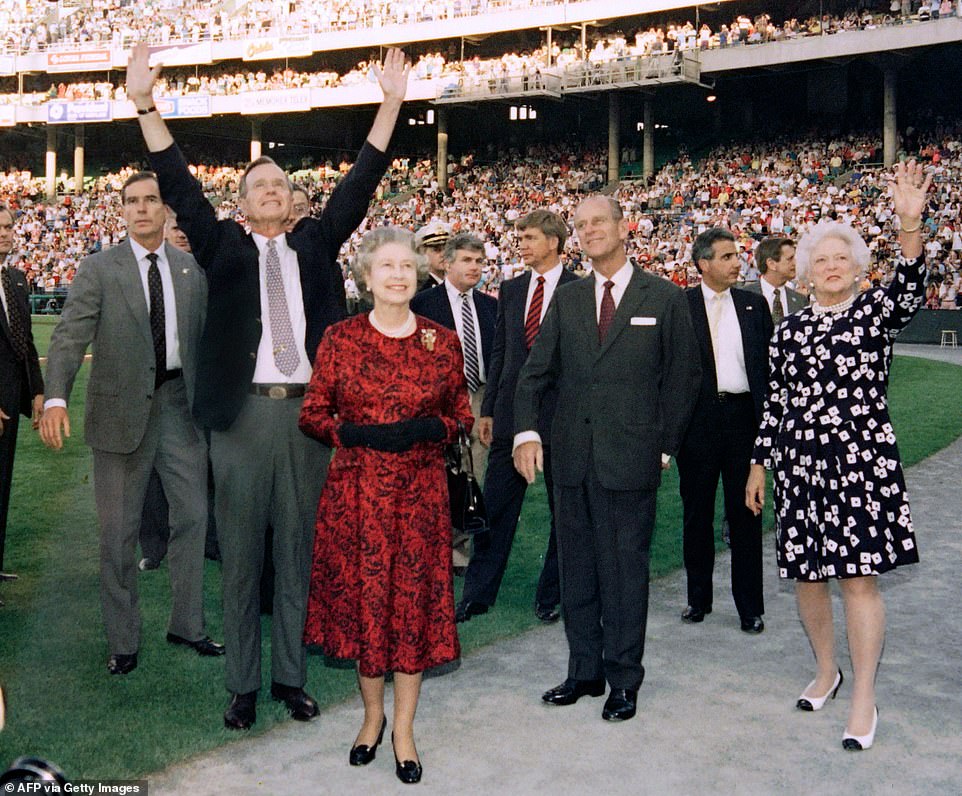 US President George H.W. Bush and First Lady Barbara Bush, the Queen and Prince Philip at the start of the Orioles vs Oakland Athletics baseball game in Baltimore in May 1991 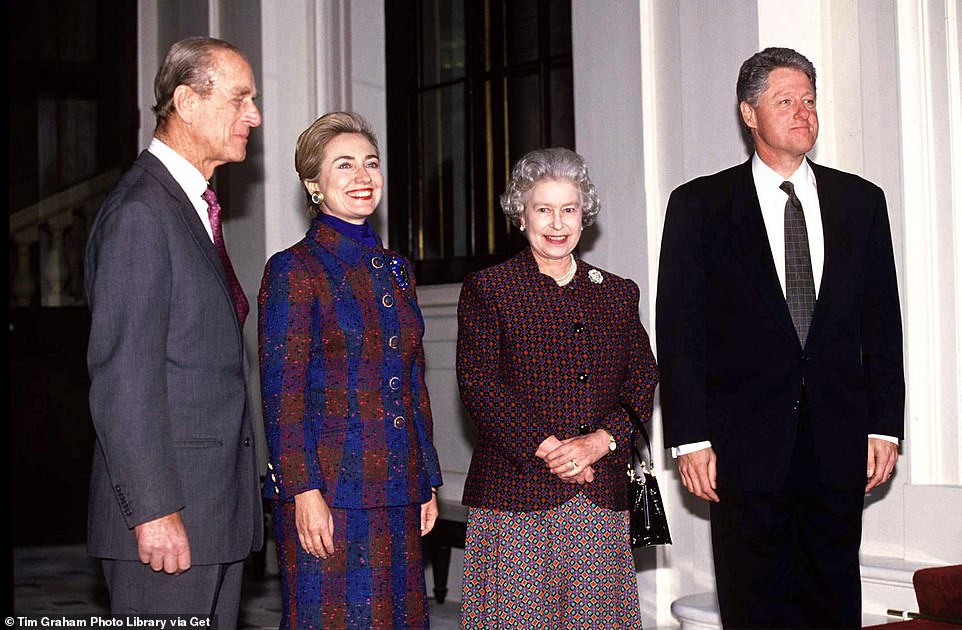 Prince Philip with Hillary Clinton, the Queen and Bill Clinton in 1995. The Clintons said in a statement: Hillary and I mourn the passing of His Royal Highness The Duke of Edinburgh, and we join people from all around the world in giving thanks for his remarkable life of service. We enjoyed every opportunity we had to visit with him through the years and will always be deeply grateful for the kindness he showed us. 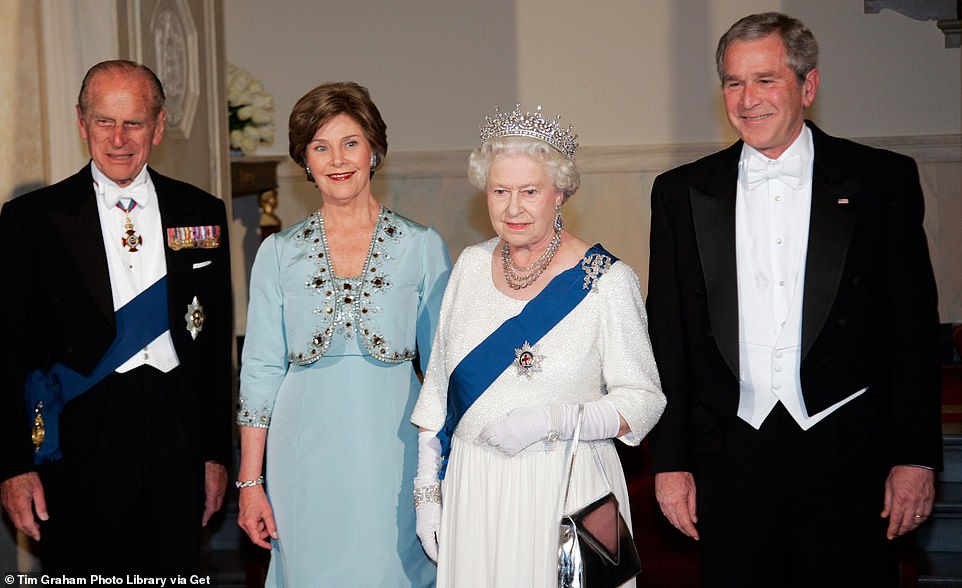 Queen Elizabeth II and Prince Philip, Duke of Edinburgh, with President George W Bush and his wife Laura Bush, attend a State Dinner at the White House on the fifth day of their USA tour on May 7, 2007 in Washington, DC

‘Laura and I are saddened to learn of the passing of Prince Philip, the Duke of Edinburgh,’ Bush sent in a statement from himself and former first lady Laura Bush.

‘Throughout his long and remarkable life, he devoted himself to worthy causes and to others,’ he continued in tribute to Queen Elizabeth II’s husband. ‘He represented the United Kingdom with dignity and brought boundless strength and support to the sovereign.’

A statement from Carter’s Presidential Library states: ‘We are sorry to hear that Prince Philip, Duke of Edinburgh, has passed away.’

Both Bush, 74, and Carter, 96, met with Queen Elizabeth and Prince Philip when they were in office.

Carter’s library included an image of him and other heads of state dining with them in May 1977 during the G7 Summit in London.

Bush also remembered: ‘Laura and I are fortunate to have enjoyed the charm and wit of his company, and we know how much he will be missed. We join those around the world offering heartfelt condolences to Her Majesty Queen Elizabeth II and the entire Royal Family.’ 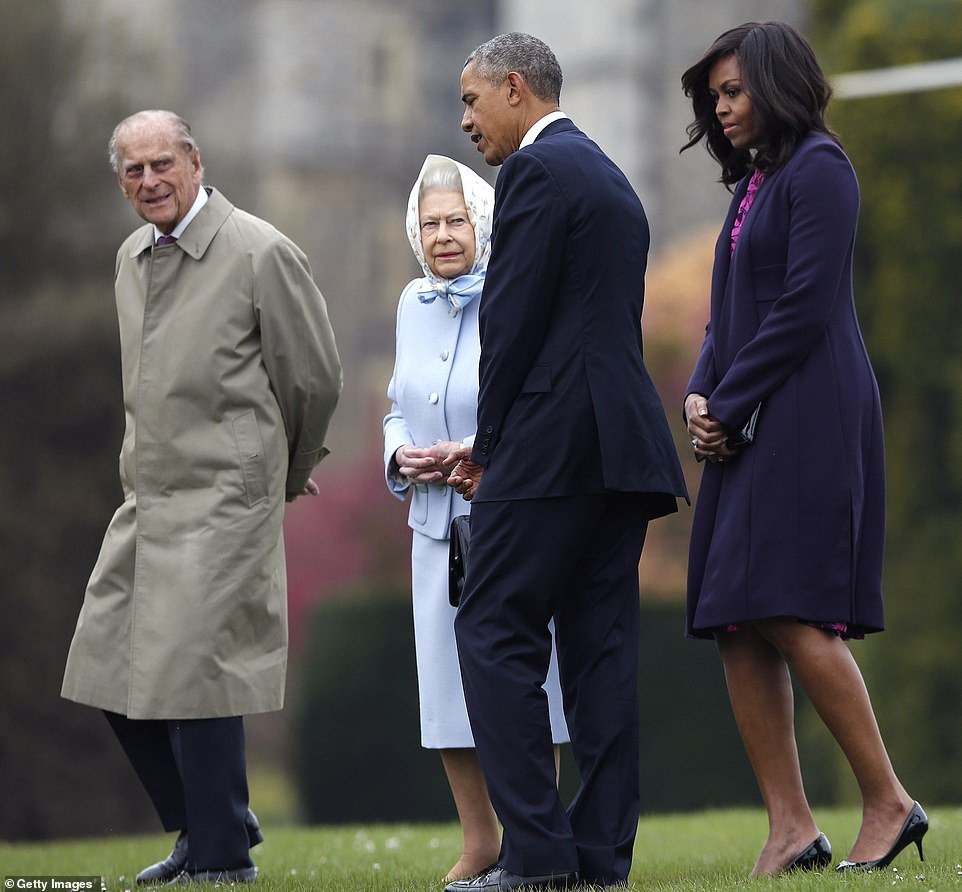 US President Barack Obama and his wife First Lady Michelle Obama are greeted by Queen Elizabeth II and Prince Phillip, Duke of Edinburgh after landing by helicopter at Windsor Castle for a private lunch on April 22, 2016 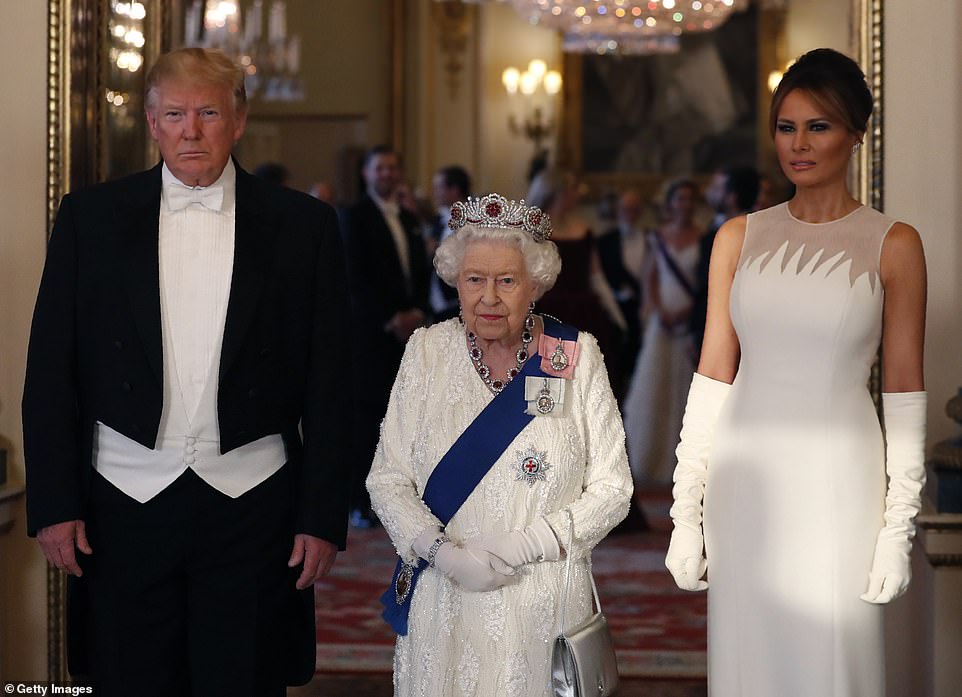 Queen Elizabeth II with Donald Trump and First Lady Melania Trump at a State Banquet at Buckingham Palace on June 3, 2019. Prince Philip had by then retired from royal duties

No statement has been released yet from the White House or from the other living former presidents, Bill Clinton, Barack Obama and Donald Trump.

‘The US Congress extends condolences over the passing of Prince Philip, whose life was distinguished by an inspiring ethic of dedicated service,’ she wrote on Twitter. ‘May it be a comfort to Her Majesty & the Royal family that so many mourn with & pray for them at this sad time.’

The Queen announced on Friday morning with ‘deep sorrow’ the death of Philip at the age of 99, her ‘strength and guide’ throughout their 73-year marriage and her 69-year reign.

‘His Royal Highness passed away peacefully this morning at Windsor Castle. Further announcements will made in due course. The Royal Family join with people around the world in mourning his loss’.

Her Majesty, who remains at Windsor Castle, is now expected to enter an eight-day period of mourning.

She will not carry out any duties, even in private, while laws will not be given the Royal Assent and affairs of state will also be paused.