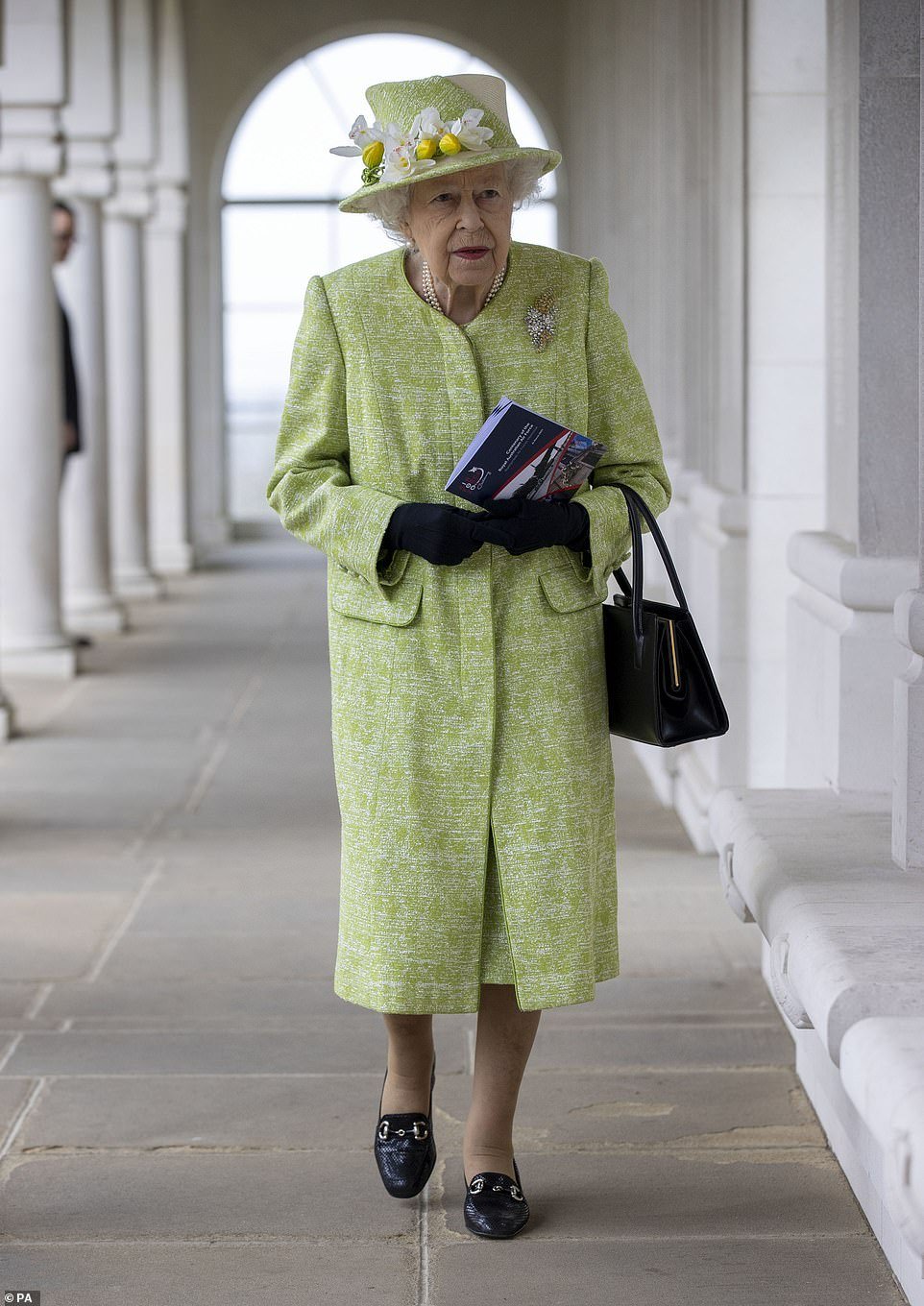 The Queen remained resolutely stoic in Prince Philip’s final days, meeting with Prince Charles for an Easter walk and carrying out her first public engagement in five months two weeks before his death.

The monarch today announced with ‘deep sorrow’ the death of her husband Prince Philip at the age of 99, her ‘strength and guide’ throughout their 73-year marriage and her 69-year reign.

The Duke of Edinburgh spent his final days at Windsor Castle with his wife after a 28-night stay in hospital having been admitted in mid-February for an infection and a pre-existing heart condition.

The Queen has continued carrying out her duties throughout her husband’s illness before his ‘peaceful’ death today, last appearing in public on March 31 to mark the centenary of the Royal Australian Air Force.

The 94-year-old monarch spent the Easter Weekend with her family, and was seen on a socially-distanced walk with Prince Charles.

The monarch today announced with ‘deep sorrow’ the death of her husband Prince Philip at the age of 99. She is seen at her last engagement on March 31 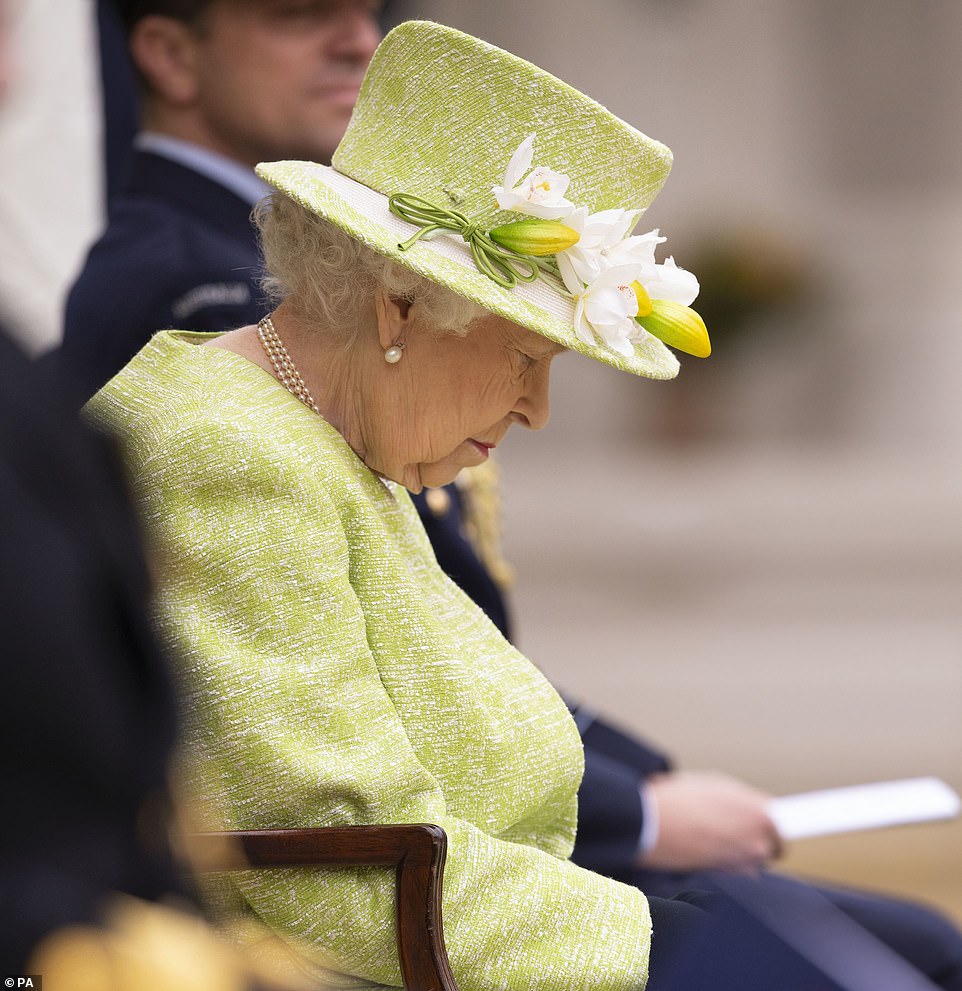 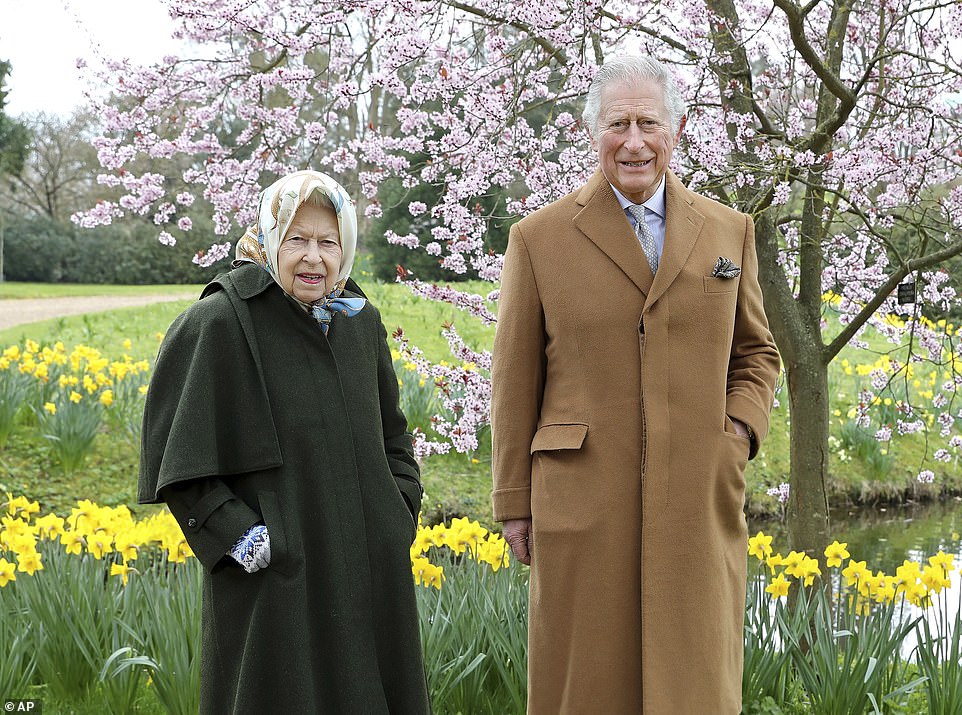 The Queen spent the Easter Weekend with her family, and was seen on a socially-distanced walk with Prince Charles in a photo released on April 2

The Queen visited the Commonwealth Air Forces Memorial in Runnymede, Surrey, on March 31 for the centenary service.

While she had been seen in video calls this year, it was the first time the Monarch has been seen in public since December, when she welcomed the Duke and Duchess of Cambridge back to Windsor after their whistle-stop tour of Britain.

It was her first in-person official engagement of 2021 – and the first since last October, when she visited the Defence Laboratory at Porton Down alongside her grandson Prince William.

It is also the first time she has been seen since Harry and Meghan’s bombshell Oprah interview.

But at the event, the Queen quizzed one Australian serviceman about his work with Typhoon jets and asked if they were ‘being sent off to chase the Russians?’ and was told, ‘That’s correct, ma’am, it’s a lot of fun for us!’

The Queen, who had her Covid vaccine in January, did not wear a face covering but donned a bright spring-inspired ensemble; an ivory Angela Kelly dress, green coat and matching hat adorned with faux daffodils and orchids, and the Australian wattle brooch presented to her on her first tour of the country in 1954.

She joked: ‘It’s a very long time since I’ve been here,’ as she arrived at the memorial – which she had opened in her coronation year, on October 17, 1953. 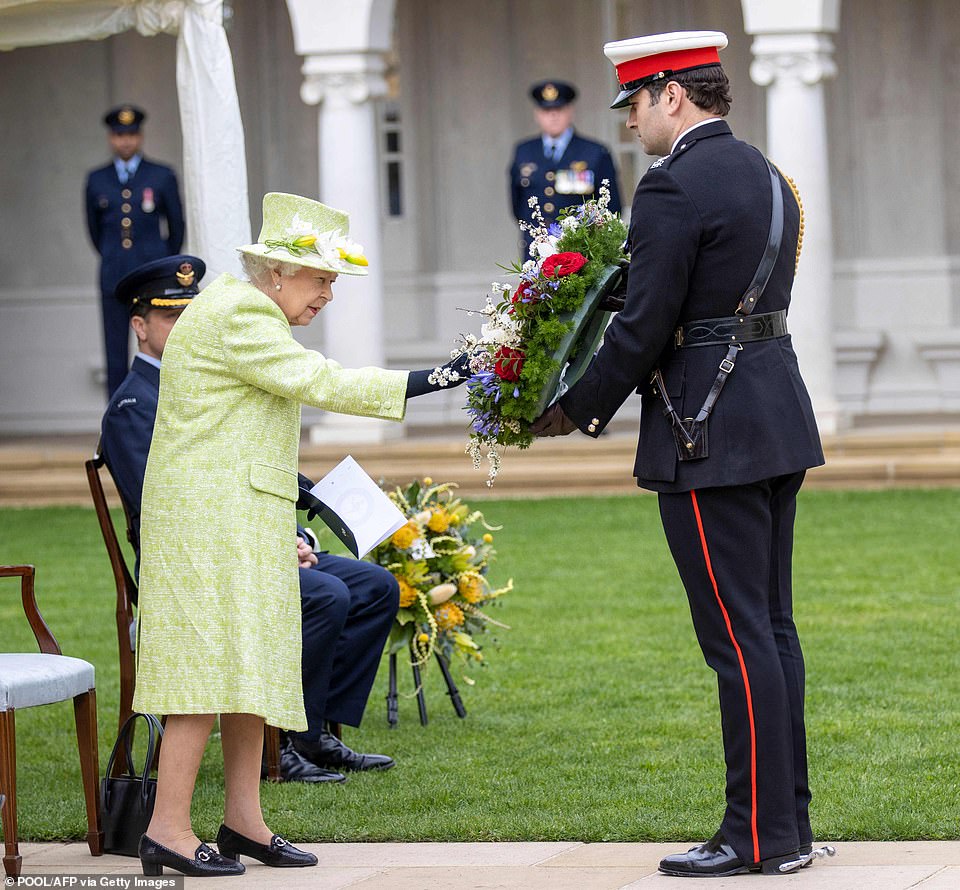 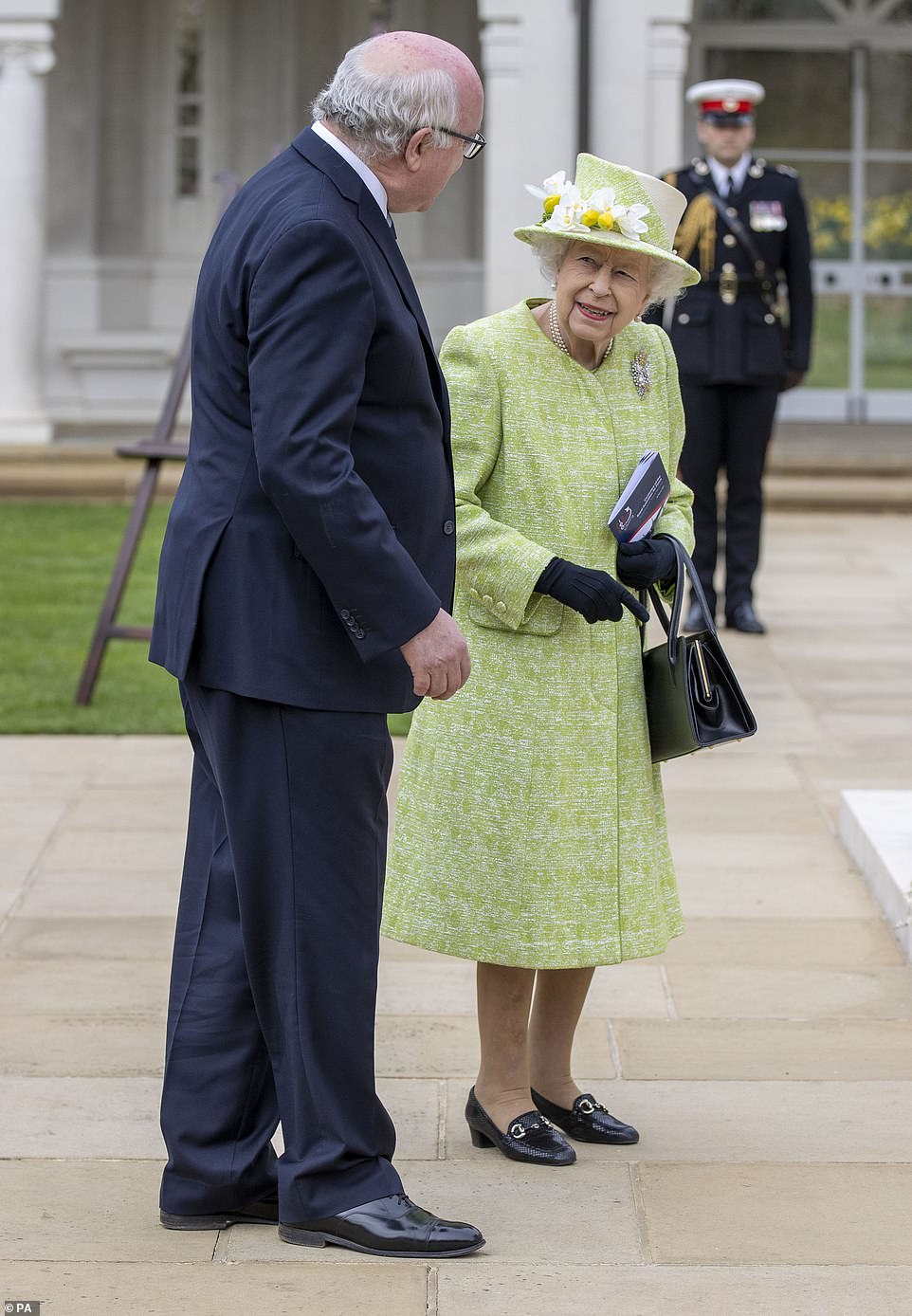 She chatted to the Honourable George Brandis (left), High Commissioner for Australian at her last royal appearance 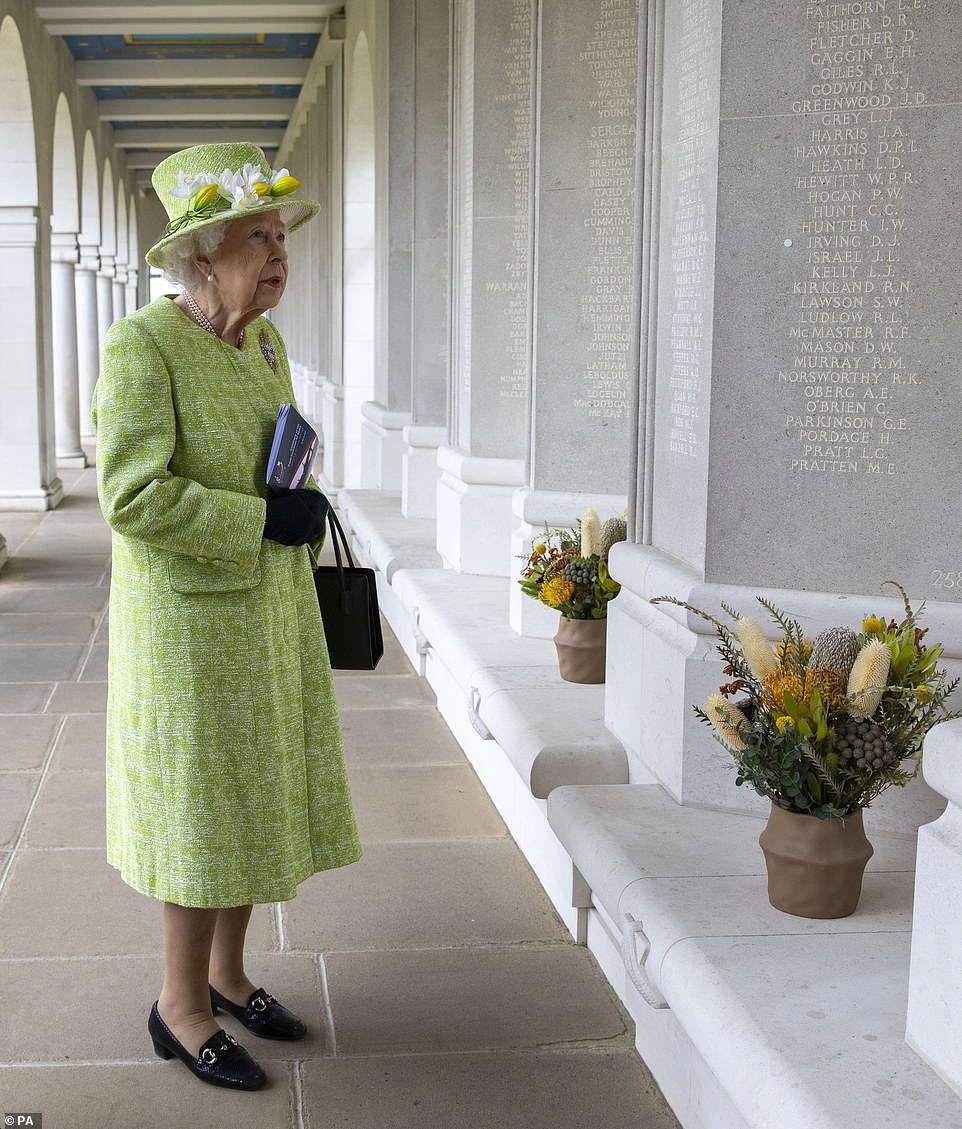 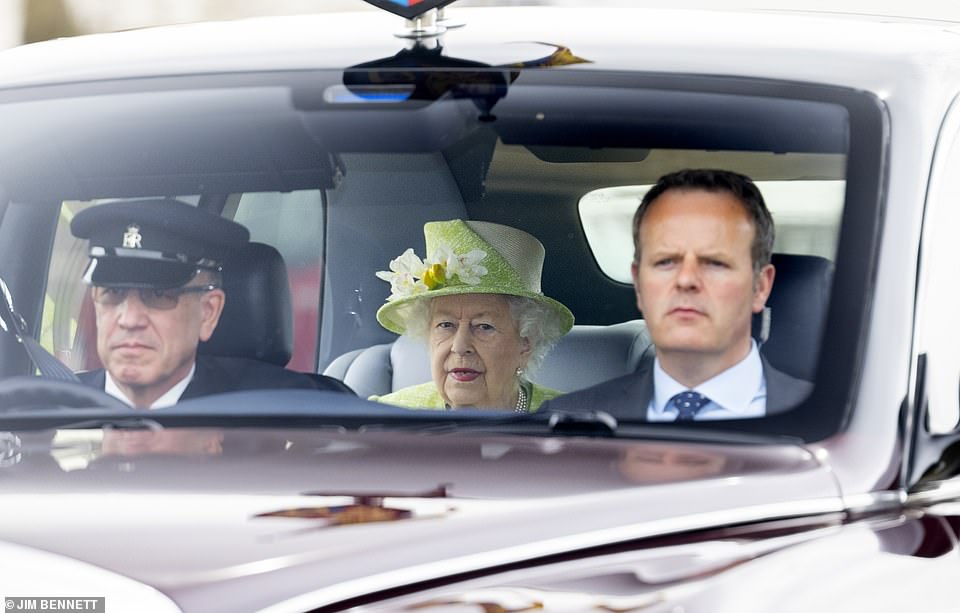 After spending the morning chatting with members of the Australian Air Force and taking part in centenary celebrations, the Queen made her way back to Windsor Castle, where Philip passed away ‘peacefully’ today

Her Majesty announced her husband’s death at midday. Buckingham Palace said in a statement: ‘It is with deep sorrow that Her Majesty The Queen announces the death of her beloved husband, His Royal Highness The Prince Philip, Duke of Edinburgh.

‘His Royal Highness passed away peacefully this morning at Windsor Castle. Further announcements will made in due course. The Royal Family join with people around the world in mourning his loss’.

His death plunges the nation and the Royal Family into mourning, and brings to an end Philip’s lifetime of service to Britain and to Elizabeth, the Queen who adored him since her teens.

‘He has, quite simply, been my strength and stay all these years,’ Her Majesty said at their Golden Wedding banquet in 1997. ‘I and his whole family, and this and many other countries, owe him a debt greater than he would ever claim, or we shall ever know.’

The quizzical, witty, faithful – and often controversial – the Duke was the Queen’s greatest source of support, her confidant and the man she relied on above all others. 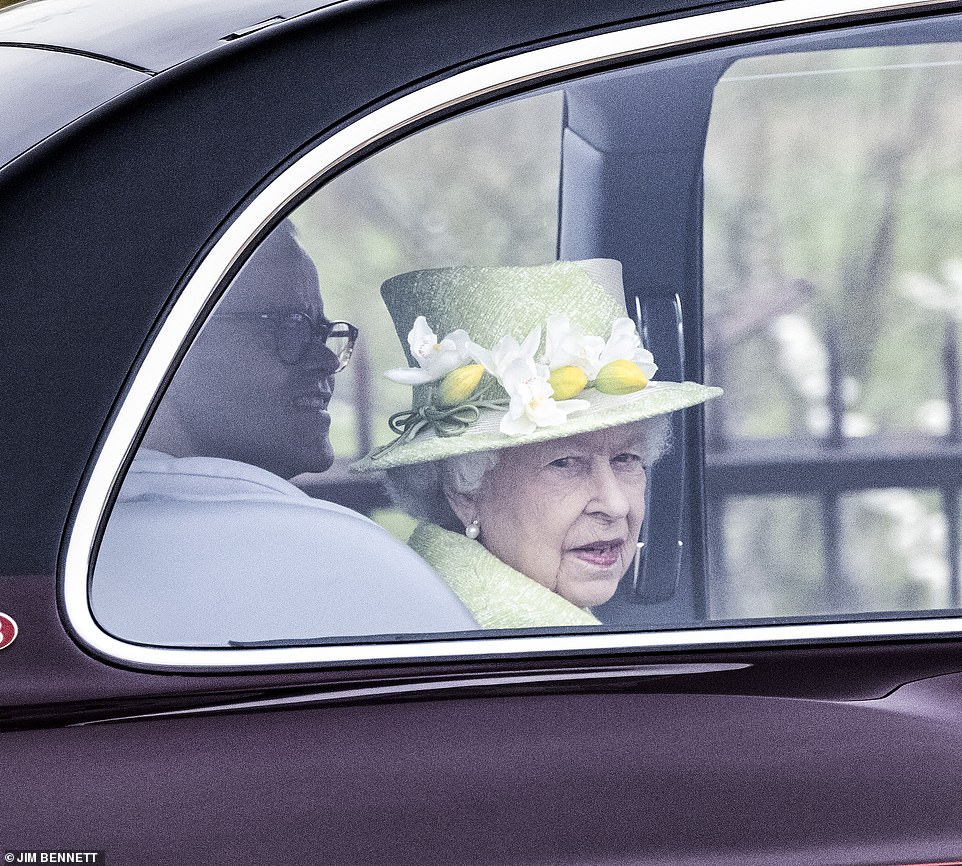 Her Majesty was pictured leaving Windsor before the event on March 31, which took place at the War Memorial at Runnymede 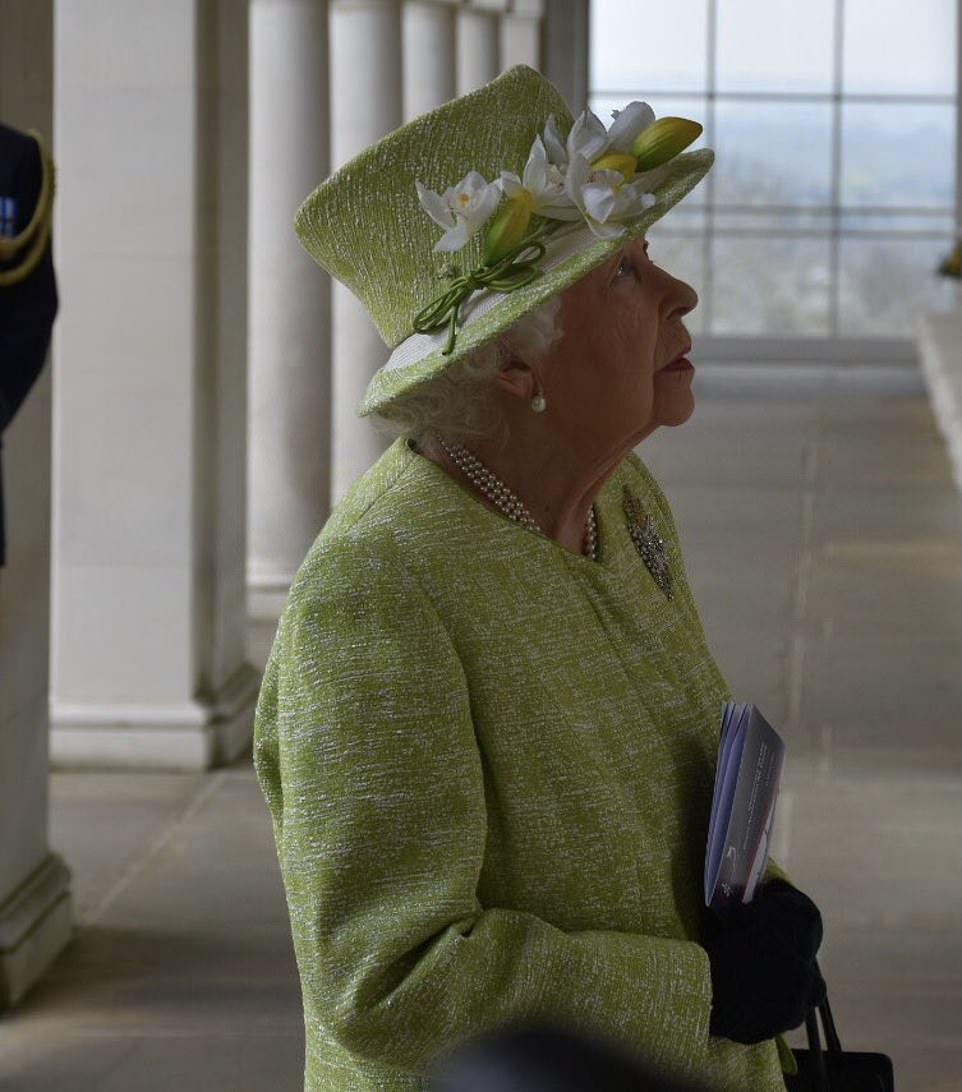 The Queen at the memorial, which commemorates more than 20,000 Commonwealth airmen and women who died during operations in north and west Europe and have no known grave 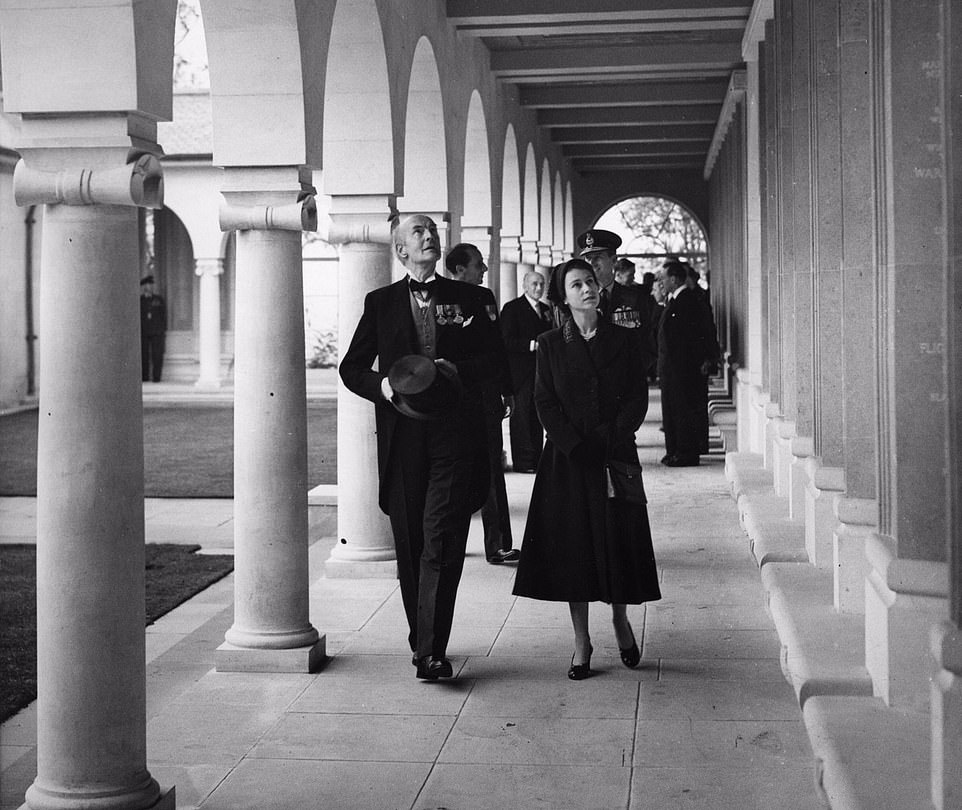 She said at the time: ‘It’s a very long time since I’ve been here,’ as she arrived at the memorial – which she had opened in her coronation year, on October 17, 1953 (pictured here)

Until his death, Philip was the longest-serving consort in British history and the oldest partner of a reigning monarch, who despite his ill health took part her first royal engagement of 2021 last week.

He was a great-grandfather of ten, with the most recent addition to his wider family being Zara and Mike Tindall’s baby son Lucas Philip Tindall on March 21 – soon after Princess Eugenie and Jack Brooksbank’s son August, who was born on February 9.

Philip’s lifelong role was to ensure that he never let The Queen down and their long-lasting marriage was one of the world’s best known relationships.

Reflecting their love in her Diamond Jubilee speech to Parliament in 2012, the Elizabeth said: ‘During these years as your Queen, the support of my family has, across the generations, been beyond measure. Prince Philip is, I believe, well-known for declining compliments of any kind. But throughout he has been a constant strength and guide.’ 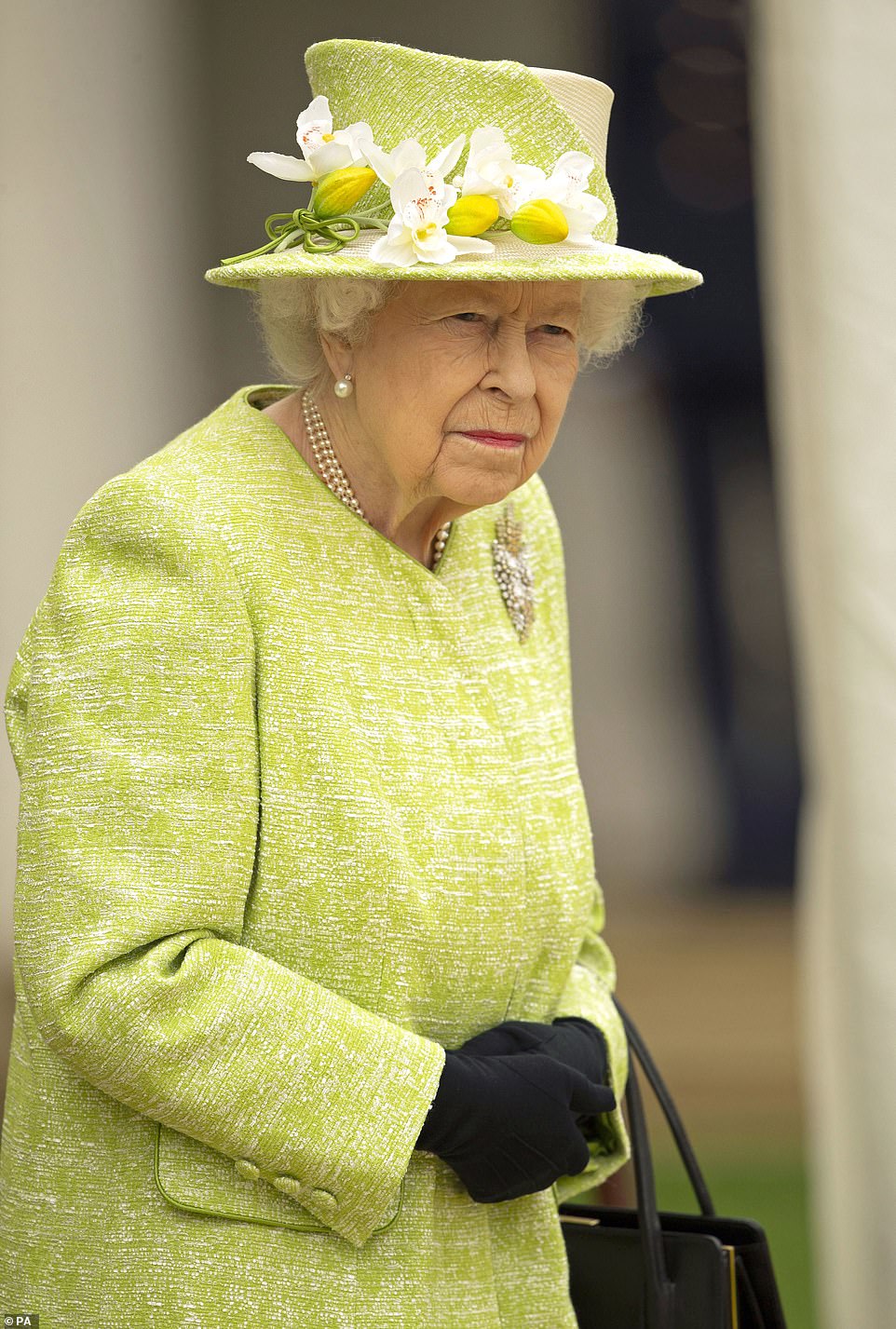 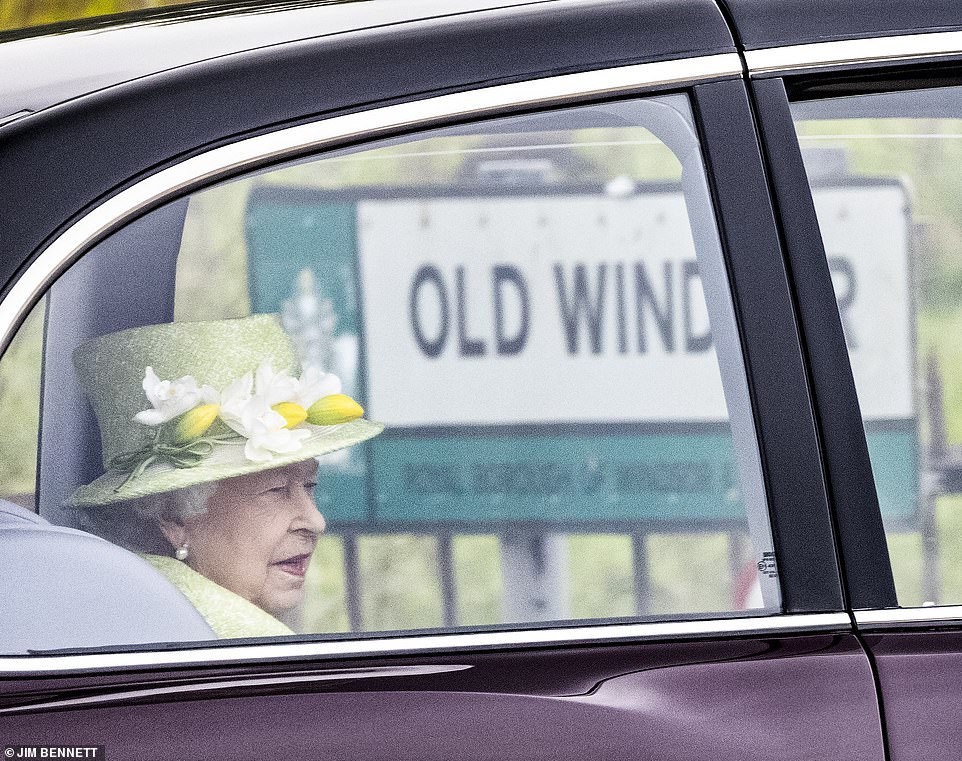 Her Majesty was last seen out in public last December, when she welcomed the Duke and Duchess of Cambridge back to Windsor after their whistle-stop tour of Britain. Pictured, the Queen leaving Windsor on March 31