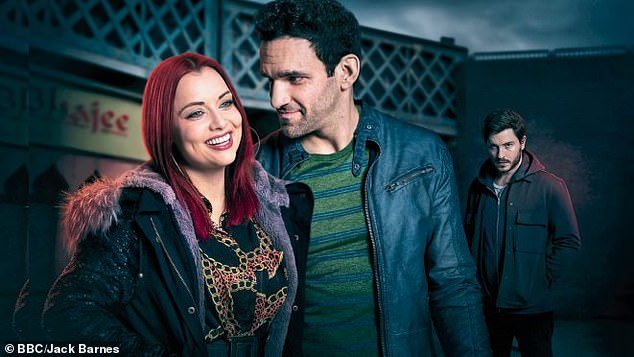 The breakneck speed with which characters go from regular person leading a normal life (well, by soap standards anyway) to criminal mastermind has always required a stretch of the imagination.

One minute EastEnders’ dishy-but-dim Kush was flogging tat on a market stall in Albert Square, the next he was getaway driver for a disastrous Mitchell heist.

When her husband’s haulage business hit financial difficulties, Emmerdale’s Nicola didn’t think to go to the bank for a loan, instead she agreed to team up with Mack on a stolen goods racket.

And where to start with Corrie’s Leanne? She recently went from paper shuffler in a solicitor’s office to drugs kingpin faster than Jenny can pull a pint in The Rovers. Then, just as quickly, she turned police supergrass, in one of Corrie’s more ludicrous plot lines.

But, as we all know, being the defendant in a dramatic court case followed by the possibility of a stint in prison is a given for most inhabitants of Soapland. And it’s certainly more exciting than that other guaranteed storyline: being in a coma.

In this week’s Eastenders, viewers are left asking how long it will be before Gray (pictured right with Whitney Dean and Kush Kazemi) gets his comeuppance for killing Tina and Chantelle

Fuming that he can’t have Whitney for himself, Gray continues to lurk menacingly in the shadows attempting to break her and Kush up.

Not that it would be a bad thing after Kush attempts to spring a surprise wedding on Whitney. She’s already had one blink-and-you’ll-miss-it marriage to Lee and then jilted Callum at the altar, so it’s unlikely to be a case of ‘third-time lucky’ with Kush.

On the day of Kush’s plea hearing, the Mitchells feel sure that, thanks to Gray, he will take the fall for the robbery. But, by the end of the week, Kush proposes a drastic and dangerous plan of action to Whitney.

Shirley arrives back in the Square having failed to locate Tina – and we all know why that is. How long before Gray gets his comeuppance for killing Tina and Chantelle?

Keegan starts work on his food stall and Tiffany designs a social media page for his venture. She suggests they do a livestream showing how he prepares the food – why would anyone want to watch a video of someone making a sandwich?

Fortunately, the footage turns out to be juicier and leads to the stall being awash with female customers. 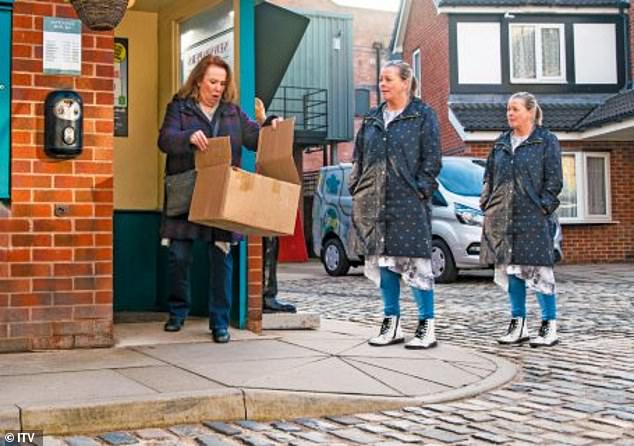 Meanwhile, Dev asks Cathy (pictured) to take time off work at the kebab shop as the trolling gets out of control in Coronation Street

The trolling gets out of control this week, so Dev asks Cathy to take time off work at the kebab shop until things blow over.

When Cathy receives a funeral wreath, she confronts Tracy, who denies all knowledge but has little sympathy.

As the situation escalates, even Craig, the cop who investigates every criminal case in Weatherfield, is unable to help. Cathy decides that it would be for the best if she moves away.

Speaking of the world’s busiest police officer, Craig is offered an exciting opportunity with the CID. That’s quite a promotion, isn’t it? It’s only five minutes since he joined the force.

The only hitch is that his chances will be scuppered if he doesn’t declare that his girlfriend Faye has a criminal record.

Tyrone is torn between two women when he agrees to move back in with Fiz for the sake of their girls. But he assures Alina that he has no future with Fiz.

However, Fiz has other ideas and books her and Tyrone in for a counselling session with Toyah.

If you’re looking for guidance on a healthy relationship then the woman who had an affair with her sister’s ex-husband and tried to pass another woman’s baby off as her own wouldn’t be my first port of call.

The family dynamic isn’t faring much better with the Baileys after Michael confesses that he did the DNA test after all. The news sends Ed off the rails and back to his old gambling habit. 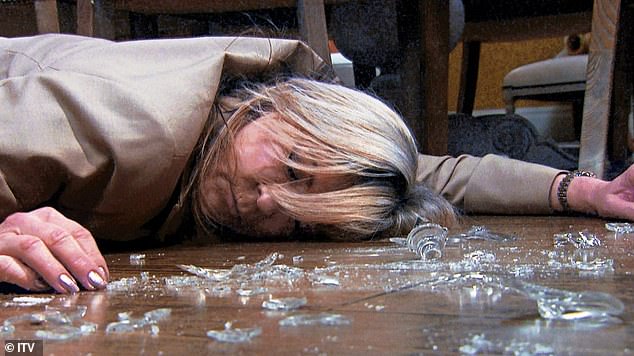 In Emmerdale, Kim takes it badly when Jamie tells her he has reached an amicable divorce settlement with Andrea and collapses (pictured) – but refuses to seek medical help

Kim takes it badly when Jamie tells her he has reached an amicable divorce settlement with Andrea, therefore depriving his mother of the thing she cherishes most: drama.

An angry Kim takes it out on Gabby, then a bottle of brandy and collapses. Lydia finds her the next day but a terrified Kim refuses to seek medical help. Is she afraid doctors may find signs of a heart?

On the day of Paul’s funeral Vinny is unable to face the truth about his wicked father.

But Mandy has no such struggle and when the hearse carrying his coffin pulls up, she tells him exactly what she thinks of him.