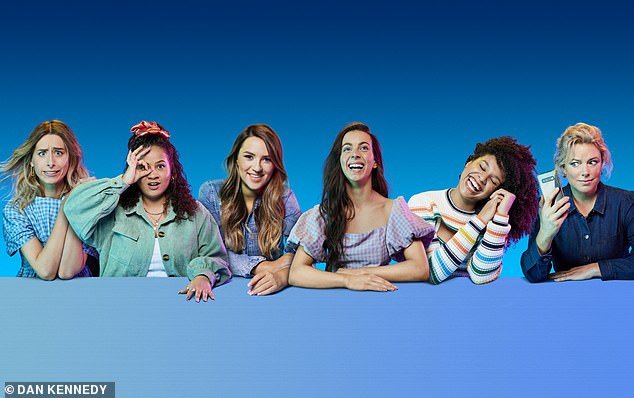 Everyone thinks it’s about teens doing silly dances, but it’s actually home to the next breed of comic superstars. Eimear O’Hagan meets the women making millions of us laugh out loud

It’s been the app of the pandemic, with more than 800 million of us worldwide, from teens to grandparents, turning to the social-media platform TikTok for entertainment and escapism.

Its quick video clips of everything from NHS staff performing dance routines in hospital corridors to skincare and cooking tutorials have proved the perfect antidote to the anxiety and monotony that has pervaded the past year.

But the app is more than just a fun way to pass the time in lockdown. TikTok has become a hotbed of comedic talent, giving aspiring performers a free and highly visible platform from which to showcase their talents.

And at the forefront of this new generation of comics are British women. From Gen Z 20-somethings to midlife mums, TikTok is home to a wealth of hilarious female talent. From their bedrooms and living rooms, alongside juggling work, children and home-schooling, they’ve been entertaining global audiences – and now brands, agents and producers are sitting up and taking notice. 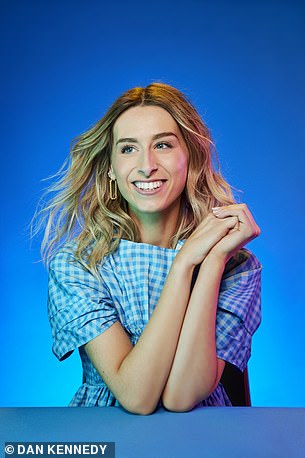 Monica Geldart, 22, lives in Harrogate, North Yorkshire, with her mum, stepdad and brother. From lip syncing to perfectly observed impressions, Monica’s humour is reminiscent of her heroine Victoria Wood.

Making people laugh has always come naturally and I gained a diploma from the Yorkshire Academy of Film and TV Acting in Leeds, alongside my school job as an art technician. My mum encouraged me to start a YouTube channel but I didn’t think anyone would be interested. When the pandemic hit and I was bored at home, I downloaded TikTok. I was amazed at the diversity of the content and particularly the comedy.

I’ve always been a people watcher and that’s where my comedy comes from. I started posting videos and in less than a year I’ve amassed over half a million followers and one of my videos – about a PE teacher who’s only interested in the ‘popular sporty girls’ – has had 2.7 million views. I’ve also worked with brands on sponsored clips – it’s incredible. I still upload each video with trepidation, hoping it will be liked. The visibility TikTok has given me has been so valuable, I wish I’d downloaded it sooner. 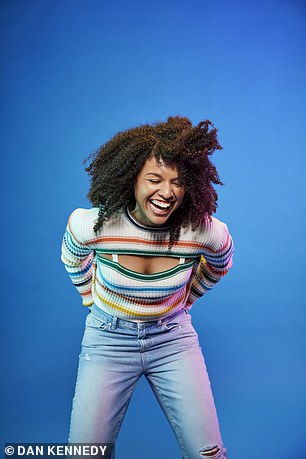 Sherice Banton, 27, lives in Bedford with her boyfriend. Wacky, high energy and loud, her fast-paced skits, including curly hair struggles, are in-your-face fun.

I’m a full-time content creator but this isn’t the career I planned – I studied law and was going to become a solicitor. I loved amateur dramatics at school but it was only a hobby.

In 2016, after I graduated, I was working in a pub and came across the app Musical.ly, which went on to merge with TikTok. I began experimenting, making short clips and just having fun. I remember being so excited when I had 50 followers… I had no idea that within five years I’d have 1.7 million.

In September 2019 I left my job at an online property company and made this my full-time career, along with consulting for brands. I’m earning more than I was, plus I have the freedom and flexibility that comes with working for myself. My videos are a mix of funny sketches based on my experiences and observations – sometimes I’m myself or I’ll play a character. I also do practical tutorials on how I care for my hair, but everything is light-hearted and uplifting. 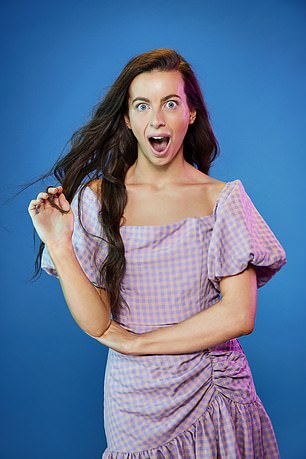 Abi Clarke, 24, lives in Bristol with her parents and sister. A seriously clever comic with her equally brilliant parents in tow, their family dance routines are a thing of pure joy.

When my first TikTok video went viral in early 2020, I was working in a café. My phone was pinging with notifications and I couldn’t believe the sketch – about a girl group chat in the style of detectives trying to crack a case – had taken off. It felt fantastic. My most popular video – about having a ‘weekend breakdown’ – has over 12 million views and was shared by Katherine Ryan, who’s one of my favourite comedians. I graduated in 2017 with a degree in drama then worked in bars and did stand-up gigs trying to forge a career as a comic. When the first lockdown came I was furloughed and began to really focus on my TikTok content. When I make videos, I want people to think, ‘That’s so me, that’s so you, that’s so us or that’s so true.’ My parents have also appeared in a lot of videos. They are really good sports!

I’ve just filmed my TV debut, the Sky One show Dating No Filter, whose producers found me on TikTok. It’s put my work in front of people who wouldn’t have otherwise known about me. 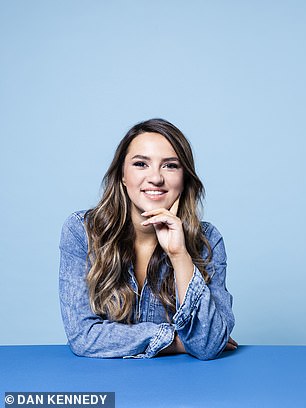 Meggie Foster, 27, lives in Oxfordshire with her mum and dad. With the hilarious side-eye she gives to politicians, royals and celebrities, her lip-syncing satirical sketches are destined for TV screens.

In the first lockdown everyone was bored and online, including me – there were a lot of dark things happening and people needed some light relief.

All I wanted to do was raise a smile and maybe remind my agent and the rest of the entertainment industry that I was still breathing. Although I went to drama school after I finished a business studies degree, my acting career had fallen by the wayside because I needed to earn money, so I decided to be proactive.

I never imagined my TikTok videos would amass 313k ‘likes’ – or that Catherine Tate’s agent would get in touch. She is my absolute idol; I would love to have a one-woman show like her.

At the start of the pandemic I was working in sales and felt a bit despondent when I was furloughed and had to move home, but it’s been great. I’ve raided my mum’s wardrobe for costumes and cut up her old wigs for props.

However, I’d like to think that when all this is over, I might be able to reclaim my artistic freedom in an actual studio of some sort – or even just someone else’s bedroom, for a change.

The fabulous nature of social media is that you don’t need much more than a good idea to make something work. 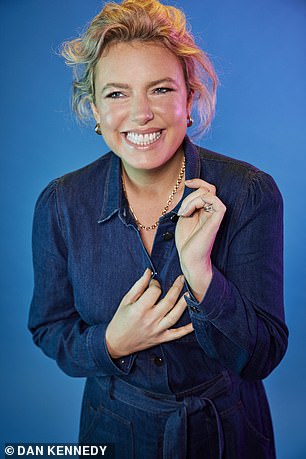 Clara Batten, 39, lives in East Sussex with her husband and two young children.

Self-deprecating, with an acerbic wit, she’s every middle-class mother in lockdown. If you’d told me this time last year that I’d have thousands of TikTok followers, including Amanda Holden, and brands paying to work with me I’d have laughed in your face.

I downloaded the app last April to watch videos – stuck at home, I was just looking for entertainment. But seeing people of all ages on there, I thought, ‘Why not me?’ I began to share original sketches and quickly became addicted. The immediate feedback of likes and comments was like being on stage.

My humour is dry, sarcastic and often has a shock factor – I’ve been told I’m a female Ricky Gervais. Around 70 per cent of my followers are women, many of them mums, who say I hold up a mirror to their own lives. Recently a woman messaged to say her mum died at Christmas and she’d laughed for the first time in months at one of my videos. It made me emotional because we’ve all struggled this past year, but doing this has saved my sanity, and if I’ve helped others, that’s a wonderful feeling. 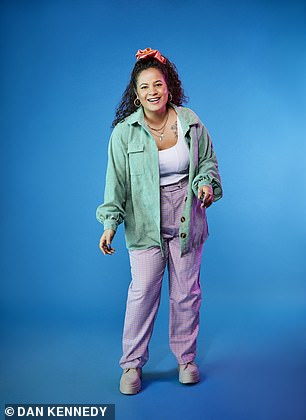 Star Holroyd, 30, lives in Wilmslow, Cheshire, with her boyfriend. She has a talent for taking random, mundane topics and making them laugh-out-loud funny.

I’ve always been an online oversharer. Before I met my boyfriend two years ago, I’d tell my terrible dating tales on Instagram.

I started uploading my own content to TikTok in February last year and then in November, I decided to make it my career. I have my channel and I’m paid to front another, @how_to_british, where I teach British slang. Between them, I have an audience of over 1.1 million and I’ve worked with brands such as Amazon and Nando’s. I still can’t take in the fact that so many people enjoy what I do.

I find inspiration from anything – the Notes app on my phone is stuffed with ideas.

A 30-second video can take me a day to create – you have to entertain a user in the first few seconds or they’ll scroll past. But I’m not interested in being famous or doing reality TV. I just want to live comfortably and be able to buy my mum a house – that’s when I’ll know I’ve really been successful.