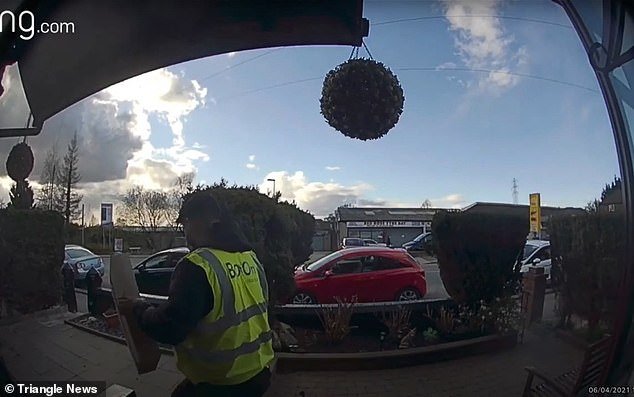 This is the shocking moment a brazen thief steals a courier’s van while he delivers a package outside a home and drives away with the vehicle.

Footage captured on a doorbell camera shows the delivery driver approach the front door of a property in Royton, Greater Manchester, on April 6 while clutching an Amazon parcel.

Just seconds later, the courier swivels round to see a thief drive his van along the road and speed out of view.

The courier, who is wearing a high vis jacket and mask, delivers the Amazon package outside a home in Royton, Greater Manchester, on April 6 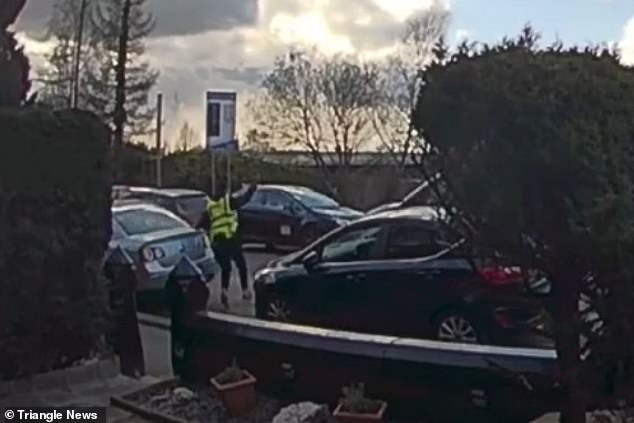 During the clip, the delivery driver, who is wearing a high-vis jacket and a face mask, approaches the property and leaves the Amazon package at the front door.

Just seconds later, the worker turns around and spots his van, which was parked across the road, being driven along the street.

He flails his arms in an effort to flag the driver down before running alongside the vehicle and shouting: ‘Oi!’

However the car thief speeds out of view and leaves the driver trailing helplessly behind.

A neighbour said: ‘The Amazon delivery driver was robbed.

‘From what I can see it was all planned and the driver had been followed and they looked for the right moment to make a move and steal the van.’

She added: ‘I was very shocked – they drove off near the traffic lights. The delivery driver ran after the van and he could not stop them, it was too late. It made me furious.’

The vehicle was located by officers later that day and no arrests have been made, Greater Manchester Police said. 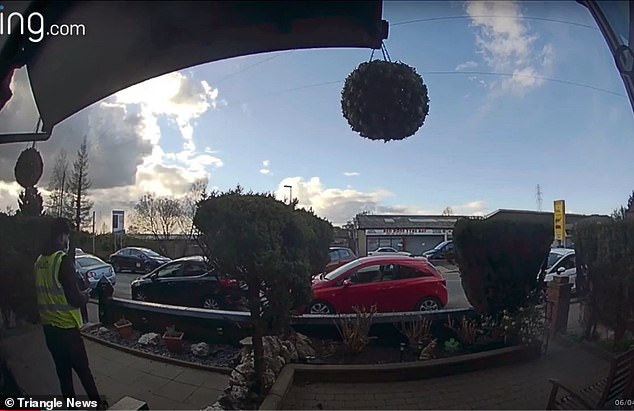 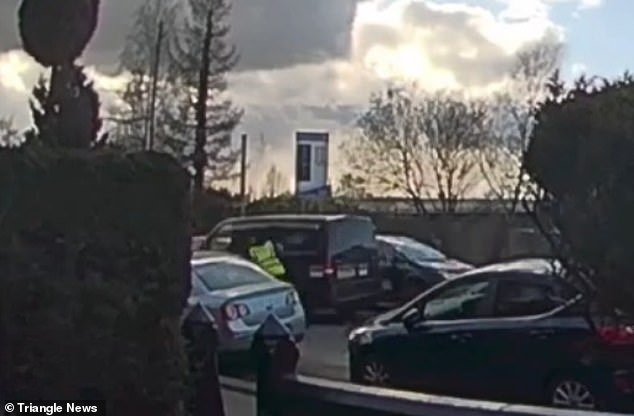 A Greater Manchester Police spokesperson said: ‘At around 5.29pm on Tuesday April 6, officers were called to a report of a van being stolen on Shaw Road, Royton.

‘The driver had been delivering a parcel when the company van was taken. The empty van was located by officers at 6.24pm.

‘No damage was caused to the vehicle. No arrests have been made.

An Amazon spokesperson said: ‘We are supporting the delivery company and the police in the investigation.’