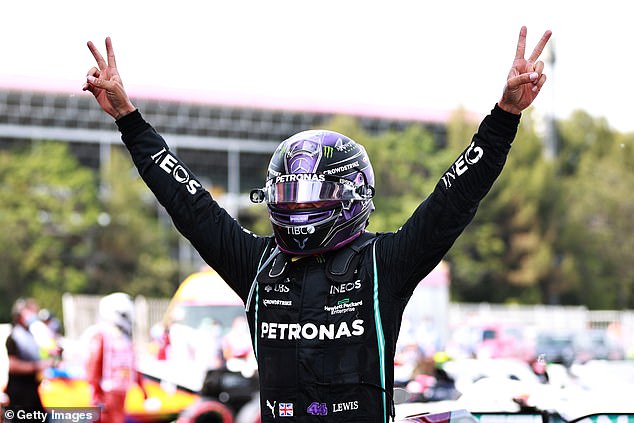 The Dutchman tried valiantly to hold off a brilliant charge from Hamilton, but his tyres were shot and his pursuer too relentless, and he succumbed at the start of the 60th of 66 laps.

Hamilton drove majestically to claim his third win from four races and extend his lead in the Championship, with Verstappen second and Mercedes’s Valtteri Bottas third.

It was an unexpectedly entertaining afternoon, with the two top men on wildly different strategies.

First, Verstappen passed Hamilton at the opening corner, a bold lunge down the inside.

The two men went at it hard, Verstappen holding on to a slim lead of about a second. Then, he pitted – it was a slow stop. Hamilton stayed out longer, coming out six seconds behind Verstappen but closing fast on fresher rubber.

Then Mercedes sprung a surprise, bringing Hamilton in again. Verstappen stayed out.

It was an entertaining afternoon, with the two top men on wildly different strategies

Now we were into the meat of the fight – Hamilton was 23 seconds back with 21 laps to reach Verstappen and pass him. The seven-time world champion put his foot to the floor and turned the timing screens purple.

In large chunks of a 1.5sec, sometimes more, he narrowed the gap. Then he passed Bottas to go second and was right on Verstappen’s back.

The Red Bull’s tyres were shot, and Hamilton cruised past at the opening corner – the place he had been overtaken right at the start.

Charles Leclerc was fourth for Ferrari and Sergio Perez fifth for Red Bull.

Verstappen grabbed the fastest lap and the extra point that goes with it.