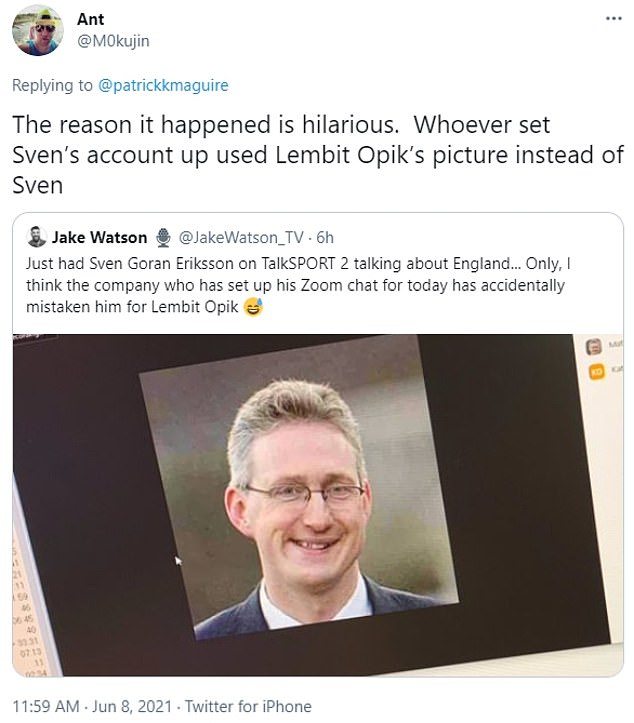 ‘Looks like Mr Opik really does want to talk to you’: Sky News viewers are left in stitches after Sven-Goran Eriksson’s interview with Kay Burley is constantly interrupted by bizarre ‘Lembit Opik’ phones calls

By Dan Sales and Jack Wright For Mailonline

The hilarious blunder took place while Swedish-born Mr Eriksson, 73, was trying to tell Miss Blurley how he learnt to speak English, ahead of England’s game against Croatia at Wembley Stadium on Sunday.

As he began to explain, Mr Eriksson suddenly received a call – and a photo of the former Lib Dem MP’s face flashed up on the screen.

Reacting to the blunder, one Twitter user said: ‘The reason it happened is hilarious. Whoever set Sven’s account up used Lembit Opik’s picture instead of Sven’

The former England football manager ignored the call and continued: ‘The language is very important… if you can’t communicate with the players, you are out. It’s very difficult to learn with an interpreter.’

However, Mr Opik’s photo appeared again, this time with a ringtone.

After Mr Eriksson smiled while appearing to end the call, Miss Burley quipped: ‘Quick thought before I ask you one more question because it does look like Mr Opik does want to talk to you; your biggest regret from being England manager?’

Before Mr Eriksson could answer her question, he was forced to end yet another call – and kept his eye on his phone throughout the rest of the interview.

Later, TalkSport presenter Jake Watson tweeted: ‘Just had Sven Goran Eriksson on TalkSPORT 2 talking about England… Only, I think the company who has set up his Zoom chat for today has accidentally mistaken him for Lembit Opik.’

He added: ‘Are Lembit and Sven friends? I don’t believe he’s calling him on repeat. I’m going to stick with my theory…’

Reacting to the blunder, one Twitter user said: ‘The reason it happened is hilarious. Whoever set Sven’s account up used Lembit Opik’s picture instead of Sven’.

The blunder took place on Miss Burley’s second day back at work, following her six-month suspension from Sky News after she was caught breaking lockdown rules in central London to celebrate her 60th birthday.