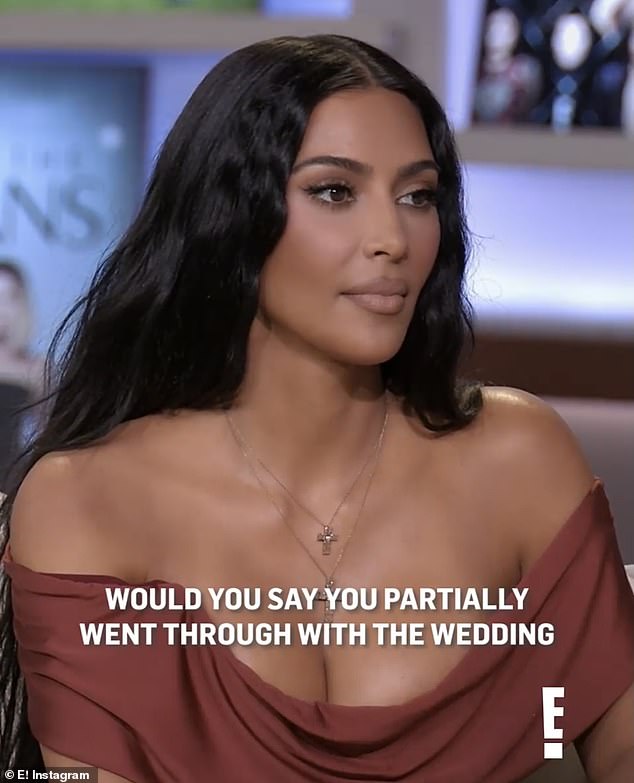 It has been ten years since she filed for divorce from Kris Humphries after just 72 days of marriage.

But now it looks like Kim Kardashian will have to answer some lingering questions surrounding her controversial union in the long-awaited reunion show.

In a newly released teaser for the upcoming special, host Andy Cohen, 53, can be seen asking Kim, 40, ‘Would you say you partially went through with the wedding because of the show?’

Tough questions: Kim Kardashian appears to be facing lingering questions about her controversial marriage to Kris Humphries in the upcoming KUWTK reunion

While Kim has been married three times, only two of her marriages have ever been aired on television – her second marriage to Kris and her third to Kanye West, whom she is in the process of divorcing.

The specific marriage Kim was asked about was not revealed in the teaser, however Kim has previously been accused of marrying Kris as a stunt to increase ratings.

It is an allegation she has denied.

‘We have an amazing fanbase that watch our show. We don’t do anything for ratings. And then I just think anyone that knows me knows that I love so hard, I fall in love fast, and I was in love. And I wanted a life that I’ve always pictured my fairy tale life to be,’ she previously said on Oprah’s Next Chapter.

Short-lived: Kim famously filed for divorce from Humphries after just 72 days of marriage in 2011

Real love: The reality star has denied allegations she married Kris in order to bolster ratings

Nothing off the table! Andy tells the cast, ‘You gave me no ground rules’

It is not the only tough subject Kim has had to grapple with on the show.

Speaking about a mysterious topic, Kim says at one point in the teaser, ‘That is something that I have to live with for the rest of my life that is something always being held over my head.’

Nothing will be off the table in the upcoming reunion, with host Andy even saying at one point in the teaser, ‘You gave me no ground rules, so I’m gonna go there.’

Get ready! The already open stars will face tough questions from Cohen

Criticism: The reality star was asked about her aversion towards sharing her life on the show

Tackling the issue: ‘Why do we have to share things and you can’t if there is already paparazzi?’ Khloe is seen asking her sister

In addition to Kim, Kourtney was forced to answer some difficult questions as well.

The reality star was asked about her aversion towards sharing her life on the show.

‘Why do we have to share things and you can’t if there is already paparazzi?’ Khloe is seen asking her sister.

Uh-oh! Andy asks the cast, ‘The amount of attention you receive from your mum as a manager directly correlates to how much money you bring in? Do you all feel that way?’

Deep: Kendall appears to be talking about Khloe as she discusses someone’s ‘trauma’

‘So was that unfair Kourtney? Did you get an unfair advantage?’ Andy asks Kourtney.

Kris Jenner is also the subject of a loaded question probing into her management of her family.

‘The amount of attention you receive from your mom as a manager directly correlates to how much money you bring in? Do you all feel that way?’ Andy asked the stars.

Kendall Jenner, meanwhile, gets deep as she tackles an issue which appears to be about Khloe.

‘I also think you’ve been through a lot of trauma is what I’m saying so I think that could also play into it,’ the model says.

The upcoming, two-part special will premiere on E! on June 17 and June 20.

Coming soon: The two-part Keeping Up With The Kardashians reunion will debut June 17 and June 20